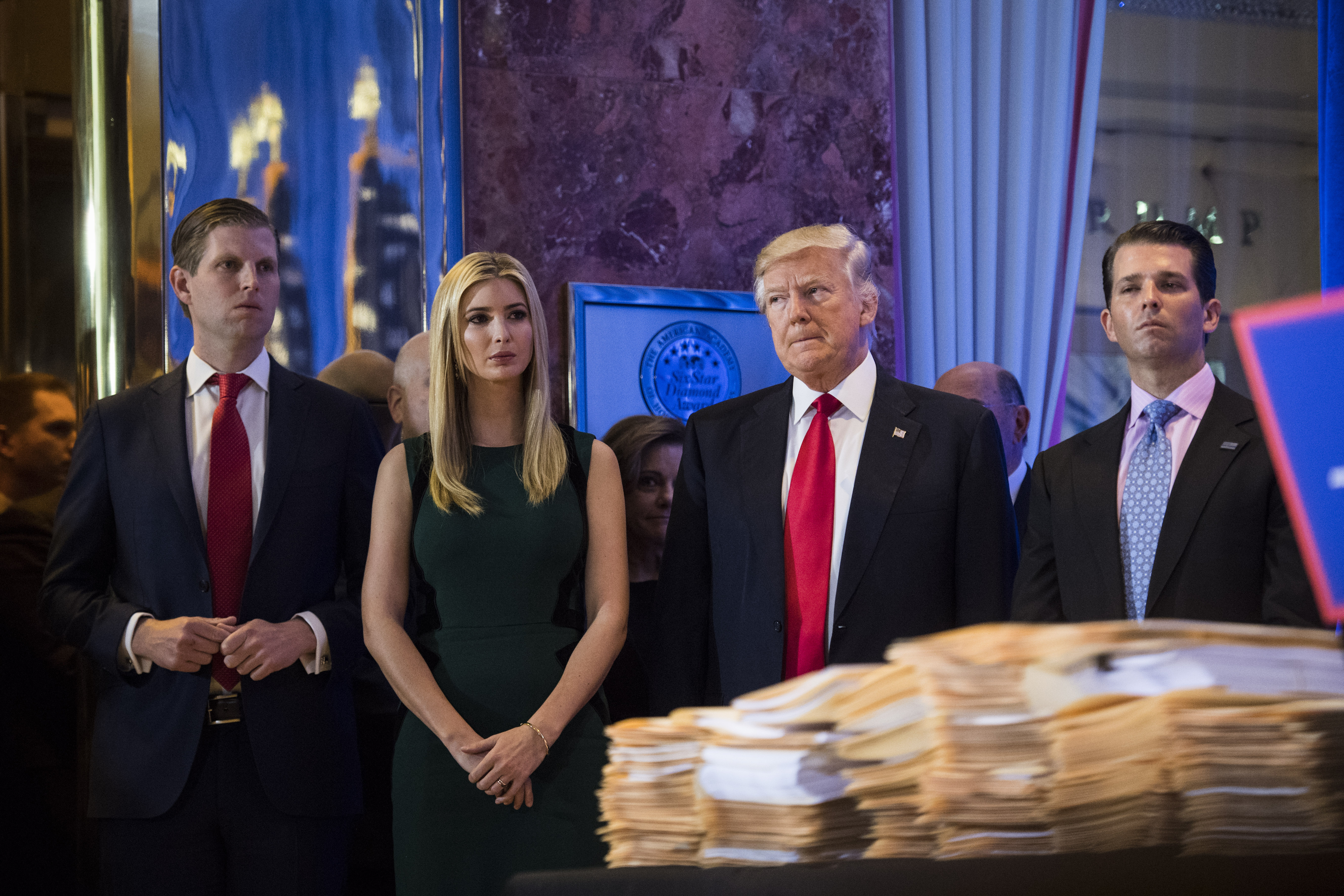 The New York attorney general on Thursday filed suit against President Trump and his three eldest children alleging "persistently illegal conduct" at the president's personal charity, saying Trump repeatedly misused the nonprofit — to pay off his businesses' creditors, to decorate one of his golf clubs and to stage a multimillion dollar giveaway at his 2016 campaign events.

In the suit, filed Thursday morning, attorney general Barbara Underwood asked a state judge to dissolve the Donald J. Trump Foundation. She asked that its remaining $1 million in assets be distributed to other charities and that Trump be forced to pay at least $2.8 million in restitution and penalties.

Underwood also asks that Trump be banned from leading any other New York nonprofit for 10 years — seeking to apply a penalty usually reserved for the operators of small-time charity frauds to the president of the United States.

In the suit, Underwood noted that Trump had already paid more than $330,000 in reimbursements and penalty taxes since 2016. New York state began probing the Trump Foundation in response to an investigation by The Washington Post.

But she asked the judge to go further, and require Trump to pay millions more. She said a 20-month state investigation found that Trump had repeatedly violated laws that set the ground rules for tax-exempt foundations — most importantly, that their money is meant to serve the public good, and not to provide private benefits to their founders. 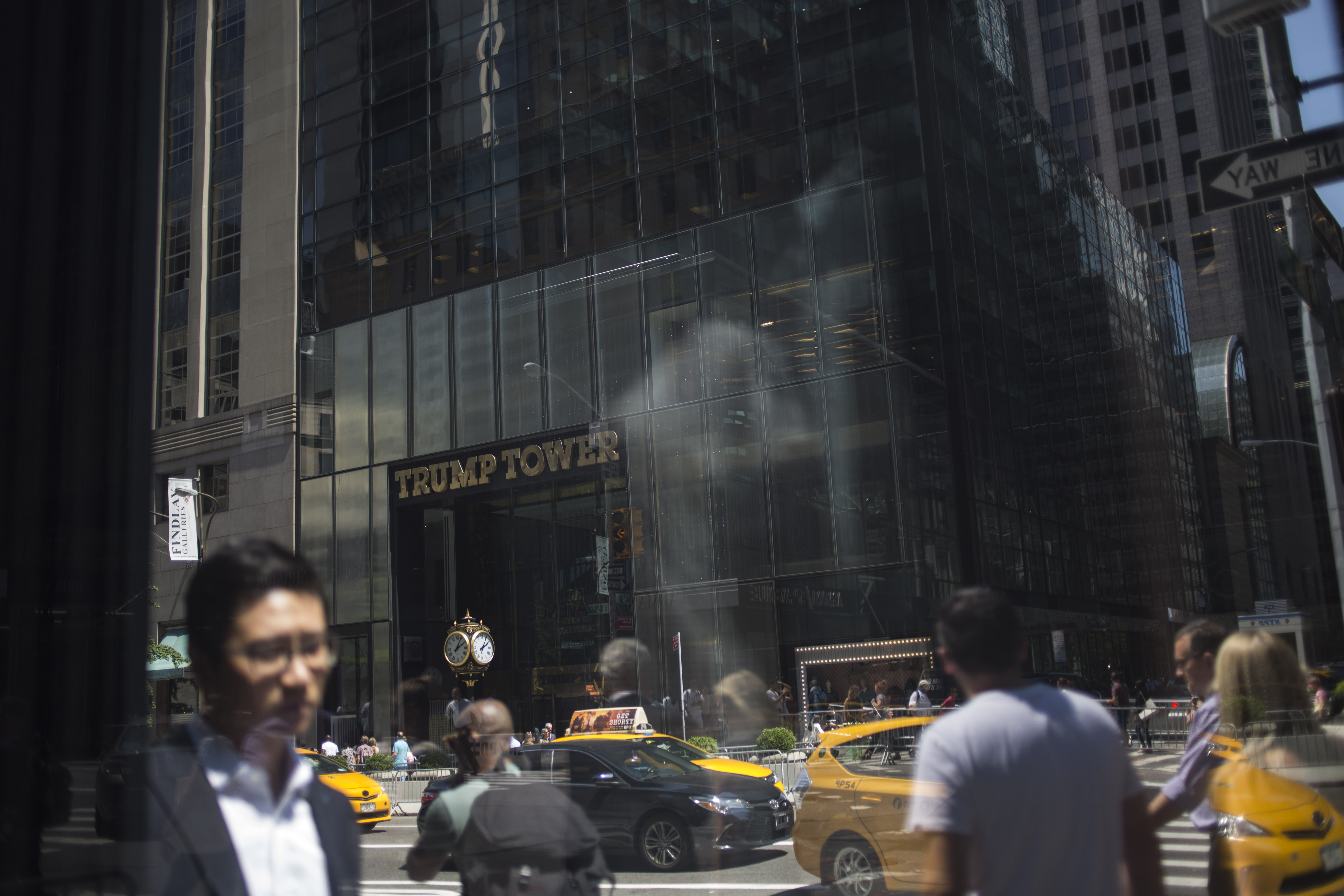 "This resulted in multiple violations of state and federal law," Underwood wrote in the legal complaint.

The White House and the Trump Organization did not immediately respond to requests for comment. Trump has been president of the foundation since he founded it in 1987. In late 2016, he had promised to shut down the Trump Foundation — but could not while the attorney general's investigation continued.

Underwood was promoted to the position of attorney general only weeks ago, succeeding Eric Schneiderman (D) after he resigned following allegations that he had physically abused several romantic partners. Underwood was a career staffer, not an elected official. She has promised not to seek election for a full term as attorney general in the fall.

Underwood declined to comment on the case beyond issuing a written statement. "As our investigation reveals, the Trump Foundation was little more than a checkbook for payments from Mr. Trump or his businesses to nonprofits, regardless of their purpose or legality," Underwood said in the statement.

Underwood said she had sent letters to both the IRS and the Federal Election Commission, identifying what she called "possible violations" of tax law and federal campaign law by Trump's foundation. 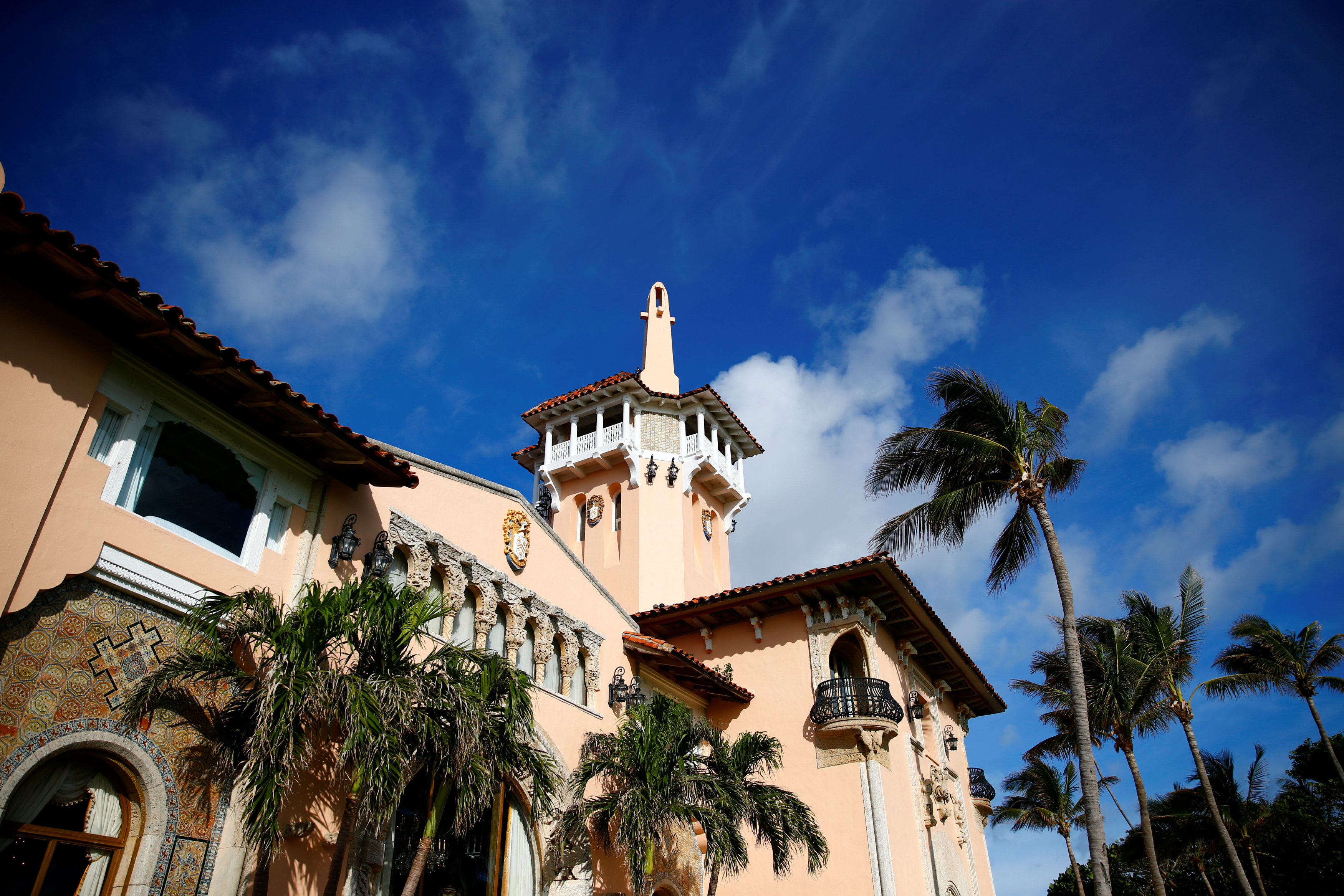 Underwood has jurisdiction over the Trump Foundation because the charity is based at Trump Tower in Manhattan and registered in New York State.

Trump's children Donald Trump Jr., Ivanka Trump and Eric Trump were also named in the lawsuit because they have been official board members of the Donald J. Trump Foundation for years. Under the law, Underwood said, board members are supposed to scrutinize a charity's spending for signs that its leader — in this case, their father — was misusing the funds.

But in reality, Underwood wrote, the three Trump children exercised no such oversight. The board had not actually met since 1999.

"The Foundation's directors failed to meet basic fiduciary duties and abdicated all responsibility for ensuring that the Foundation's assets were used in compliance with the law," Underwood wrote.

She asked the judge to ban each of the three from serving as a director of a New York nonprofit for a year. It was not clear if any of the three are serving currently on the board of any such charities: Eric Trump, for instance, stepped down from the board of the Eric Trump Foundation after the 2016 election, and the charity was renamed Curetivity.

Although Trump's name is on the foundation, in recent years most of its money was not actually his. Trump did not give any donation to the Trump foundation between 2008 and 2015 — instead, its largest benefactors in recent years have been wrestling moguls Vince and Linda McMahon, who gave $5 million total in 2007 and 2009. Linda McMahon was later appointed by Trump as head of the Small Business Administration. The McMahons have declined to answer questions about the reasons for their gifts.

The lawsuit shows that the Trump Foundation — which Trump founded to give away some of the royalties from his 1987 book "The Art of the Deal" — looked, on paper, like other tax-exempt nonprofits. It filed annual reports with New York state and the IRS. It listed directors and donations.

But behind the scenes, Underwood said, the foundation was essentially one of Trump's personal checkbooks — a pool of funds that his accounting clerks knew to use whenever Trump wanted to pay money to a nonprofit. By law, Trump wasn't allowed to buy things for himself using the charity's money, even if he was buying them from nonprofits.

At one point, during a deposition, a New York state investigator asked Allen Weisselberg — a Trump Organization employee who was also listed as treasurer for the Trump Foundation — if the foundation had a policy for determining which specific payments the foundation was allowed to make.

"There's no policy, just so you understand," Weisselberg said. The interviewer asked if Weisselberg had understood he was actually on the board of the Trump Foundation, and had been for more than a decade.

"I did not," Weisselberg said.

With no outside oversight over Trump's use of foundation funds, Underwood said, the future president had repeatedly used his charity's money to help his businesses, and himself.

In 2007, he settled a dispute with the town of Palm Beach over code violations at Trump's Mar-a-Lago Club. The town agreed to waive outstanding fines if Mar-a-Lago gave $100,000 to a charity.

But the donation, to an organization called Fisher House, came instead from the foundation, Underwood said — after Trump wrote a note to Weisselberg. "Allen W, DJT Foundation, $100,000 to Fisher House (Settlement of flag issue in Palm Beach)," said the note, which is included in the lawsuit.

In addition, in 2012, a Trump golf club agreed to pay $158,000 to settle a lawsuit with a man who was denied a $1 million hole-in-one prize during a tournament at the club. The Trump Foundation paid the money instead of the club, Underwood said.

Both of those payments were first reported by The Washington Post. In March, after the attorney general's investigation was underway, Trump repaid his foundation all $258,000, plus more than $12,000 in interest, Underwood said.

Underwood also listed several smaller instances of what she called "self-dealing," meaning Trump using foundation money to help his businesses. The charity paid $5,000 to put an ad for Trump hotels in the program for a charity gala. It paid $32,000 to satisfy an obligation of a Trump company that manages a New York estate. It paid $10,000 to buy a portrait of Trump, which was later found hanging in the sports bar at Trump's Doral golf resort.

In the case of the portrait, she said Trump's golf club had now paid the foundation the "fair rental value" of using the foundation-owned painting as decoration. The value: $182.

IRS rules also prohibit tax-exempt foundations from aiding political campaigns. But Underwood listed two instances where Trump's foundation had seemed to do so.

In August 2013 Trump donated $25,000 from his foundation to a Florida political group aiding the reelection of state Attorney General Pam Bondi (R). Around the same time, Bondi's office was considering whether to join an ongoing lawsuit by Schneiderman, then the New York attorney general, alleging Trump had defrauded students at his now-defunct "Trump University."

Afterward, the Trump Foundation omitted any mention of Bondi's political group — called And Justice for All — from its annual report to the IRS, and instead said the $25,000 donation had gone to a nonprofit in Kansas with a similar-sounding name.

Underwood said Trump's staff blamed confusion among accounting clerks for spending the foundation's money, instead of Trump's own. As for the incorrect IRS filing, Underwood wrote, "the Foundation has no credible explanation for the false reporting of grant recipients."

But Underwood alleged that the campaign Trump's foundation helped most was his own.

In January 2016, Trump skipped a debate among Republican candidates because he was feuding with Fox News, the debate's host. Instead, Trump held a televised fundraiser for veterans — drawing millions from wealthy friends and small-dollar donors, and giving much of it to the Trump Foundation.

Underwood said that, afterward, "the Foundation ceded control over the charitable funds it raised to senior Trump Campaign staff." She cited emails in which Corey Lewandowski, Trump's then-campaign manager, directed which veterans' charities should receive money.

At one point, Lewandowski emailed Weisselberg to ask if the Trump Foundation's money could be ready to distribute during Trump's last campaign events before the Iowa caucuses: "Is there any way we can make some disbursements [from the proceeds of the fundraiser] this week while in Iowa? Specifically on Saturday," Lewandowski wrote, in an email cited by Underwood.

At one point, the lawsuit says, Trump actually gave out an oversized $100,000 "Trump Foundation" check to a charity at a campaign event in Council Bluffs, Iowa.

The problem: nobody appears to have told the Trump Foundation.

"This 'check' was given out (see video). This is not one of the charities we've cut a check to yet. Are there other charities like this?" wrote Jeff McConney, a Trump Organization staffer, in an email to Lewandowski cited in the lawsuit.

The check was later cut.

In 2016, Trump sought to excuse his foundation's actions in a letter to the New York attorney general, saying that the Iowa fundraiser was a charity event. "This statement was false," Underwood wrote, "because, in reality, the Fundraiser was a Trump Campaign event in which the Foundation participated."

She wrote that Trump had repeatedly signed charity documents saying that nonprofits like his were not allowed to become involved in political campaigns. "Mr. Trump's wrongful use of the Foundation to benefit his Campaign was willful and knowing," she wrote.

As president, Trump has repeatedly called for the repeal of the "Johnson Amendment," a 1954 tax code provision that imposed the ban on political activity by nonprofit groups.