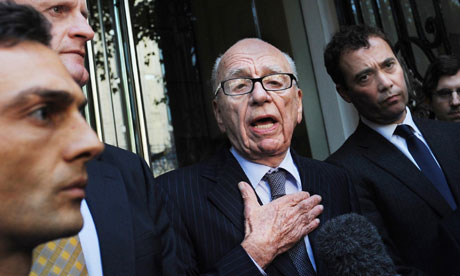 News Corporation made a loss of $1.6bn (£1.2bn) in the last quarter as it absorbed $2.8bn in charges related to a plan to spin off its ailing publishing businesses.

The loss compared with a profit of $683m in the same period a year ago and came as revenues dipped 6.7% to $8.4bn, hit by a slide in audiences for TV shows including American Idol and disappointment at the box office for its Hollywood studio. The results were below analysts' expectations and the company's shares fell in after-hours trading.

The fourth-quarter loss was linked "most significantly" to poor performances at News Corp's Australian publishing assets, the company said.

News Corp announced plans last month to split off its publishing assets including the Wall Street Journal, the Times and the Sun in the UK, and its Australian newspapers from the more lucrative film and television assets including Fox Broadcasting, the Twentieth Century Fox studios and its stake in BSkyB.

The move comes in the wake of the phone-hacking scandal that has led to a sprawling criminal investigation in Britain and has triggered an investigation in the US under the Foreign Corrupt Practices Act.

News Corp said legal costs relating to the investigation had risen to $224m for the 2012 fiscal year.

On a conference call with analysts, News Corp president Chase Carey said the split of the company was going as planned and "all about bringing focus and alignment to our business".

The results painted a grim picture for the publishing business, which reported annual operating income of $597m, down from $864m a year ago. The drop would be even worse, were it not for the exclusion of a $125m litigation settlement charge the company took last year related to its marketing services business.

News Corp's publishing business was hit particularly hard by declines at its Australian and UK newspapers, as well as the absence of contributions from the closure of the News of the World.

Carey said 2013 would be a flat year for publishing and that a recovery in UK business was likely to be offset by more losses in Australia.

Rupert Murdoch, chairman and chief executive, was not on the call, but said in a press release: "News Corporation is in a strong operational, strategic and financial position, which should only be enhanced by the proposed separation of the media and entertainment and publishing businesses."

Murdoch's son, James, who stepped down from senior executive positions at BSkyB and News Corp in the UK earlier this year, was present on the conference call but was not asked any questions and did not speak. The media was allowed to listen in to the call but reporters were not permitted to ask questions.