To my utmost shame, over the past month I have become one of those dudes who's into cryptocurrency. So far, I have spent about $105 building up a portfolio of coins of varying degrees of sketchiness, in the hopes that one of them will take off like a rocket and make me fabulously rich — or at least help me pay off my credit card. As one friend who enabled my nascent crypto day trading habit pointed out, "Putting money in crypto is the only conceivable path I've ever heard of with a bigger than one percent chance of me getting rich without trying."

Right now, my $105 has seen a return of… negative two dollars. While I've already disabused myself of the notion that I'll ever hit the big time with my little digital bag of digital coins, I still hold out hope that I'll wake up one day and discover that my $103 is worth $110. Seeing as I'm in uncharted territory here, even my very modest goal of not totally losing my shirt requires a faith in something larger than myself.

Faith is about the only thing driving the cryptocurrency industry, which goes a long way towards explaining 0xΩ, a "blockchain religion" created by artist Avery Singer and Matt Liston, the ex-CEO of decentralized prediction market platform Augur. While the details of 0xΩ are a bit fuzzy, it's basically meant as a platform where people can democratically design a belief system and use blockchain technology to exchange "sacred texts" and vote on the operations of said religion. An article from Forbes discussing the religion's launch (Sidebar: What kind of religion has a launch event???) reports:

The [0xΩ] model allows for believers to identify, approve and evolve their own sacred texts via a smart contract, blockchain-enabled code that gives users the assurance they're all viewing the same data without a middleman to verify the content. […] From there, the governance model further resembles proxy-voting in that it gives adherents of a religion the ability to appoint leaders and fund projects that fulfill the religion's mission.

Coverage of 0xΩ in the cryptocurrency media has mostly taken it at face value, presenting it as a completely sincere project meant as a use case for putting religion on the blockchain. However, it's important to note that 0xΩ was launched at the New Museum at an event put on by Rhizome, a prominent digital art booster and affiliate of the museum. While Liston refers to 0xΩ as "a religious framework" in the Forbes article, he also calls it "the ultimate critique of existing institutions." Which begs the question: Is it possible that one of the institutions he's referring to is the world of cryptocurrency itself, placing its conventions into a context that make them scan as patently absurd?

The act of mining crypto is a ritual sacrifice of time in order to strengthen belief in a consensus network. Tokens are commoditized faith in blockchain transaction ordering as the root chain for all events. https://t.co/0JY4ZACkp3

Minimal as my investments in cryptocurrency may be, they've helped me comprehend the religious mindset of the most zealous fans of internet money. Crypto's Jesus figure is Satoshi Nakamoto, an internet persona who introduced Bitcoin and the blockchain to the world and then disappeared, effectively dying for the sins of global finance so that it might be reborn. Those who converted to Bitcoin early have already been rewarded by seeing their investments compound, and the most devout wait for a crypto version of the rapture, when a cryptocurrency — presumably Bitcoin or Ethereum — displaces the dollar as the dominant global currency. Some of the most idealistic hold out a hope for a day when stateless digital currencies lead to a healthy redistribution of capital — a world in which people are no longer subservient to a handful of powerful individuals and institutions.

Liston himself has drawn a similar connection between crypto and religion — in a recent Tweet, he compared the act of mining for digital currency to "a ritual sacrifice" that "strengthen(s) belief" and referred to crypto tokens as "commoditized faith in the blockchain." Every cryptocurrency has white paper, which lays out how the whole system will work and can be said to be its sacred, foundational document; Liston and Singer's project parodies this convention by calling theirs a "flame paper" — perhaps a reference to the Bible, in which God often announces his presence through fire. 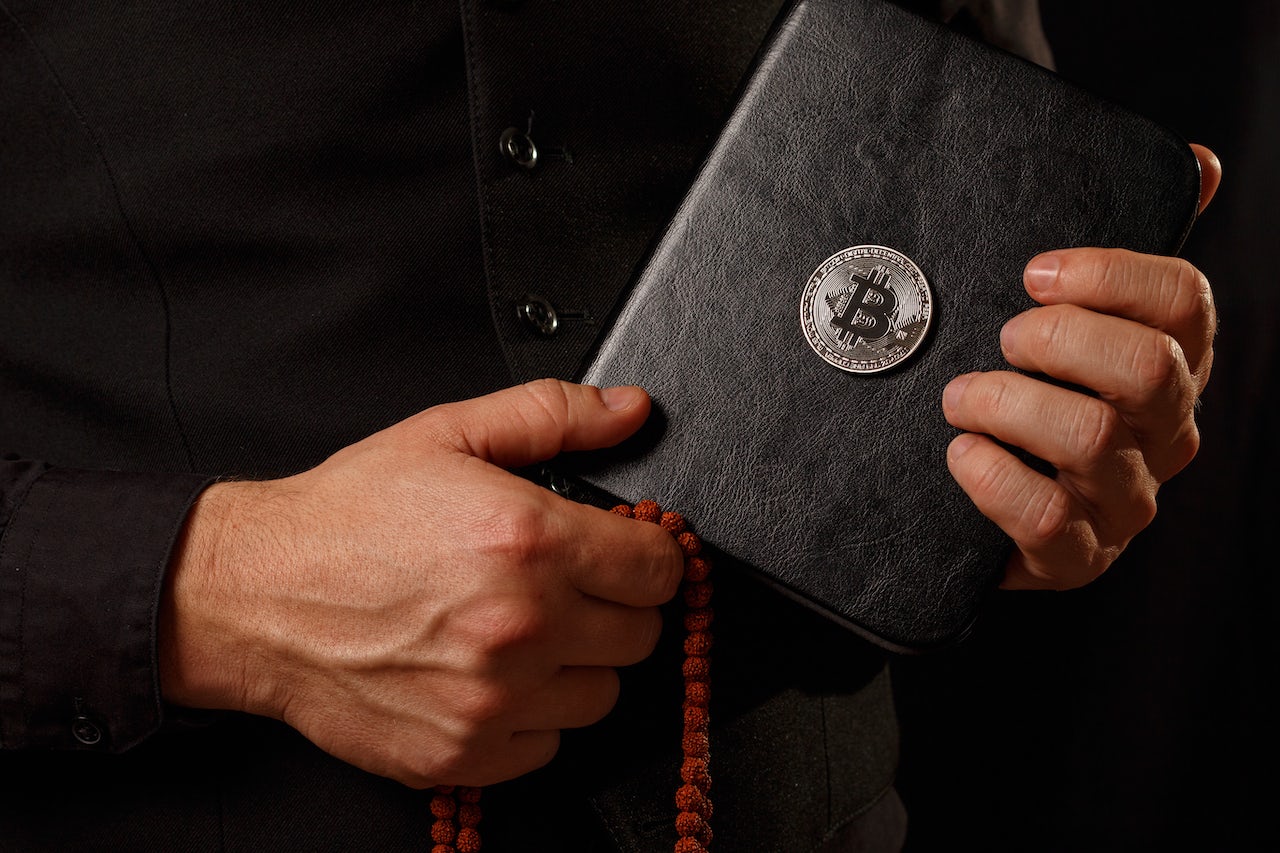 Crypto's most devout believers see the blockchain — which essentially crowd-sources the veracity of transactions and can serve as a reliable digital record for all sorts of information — as a potentially revolutionary technology. As such, many have begun exploring the ways in which it can be used to help the average person improve their lives.

There are proposals to put globally shipped goods on the blockchain to help give distributors a better understanding of, say, all the places a batch of Romaine lettuce went to before giving someone in New Jersey salmonella. Others want to use the blockchain to save online publishing — the Brave web browser wants to help its users circumvent online advertising and instead donate to their favorite sites directly with their Basic Attention Token, while the soon-to-come platform Civil wants use the blockchain to preserve a publication's archives and ensure journalists are financially supported. Someone has already started a crypto-only city called Bitcointopia; even if it's just a tent in the desert so far, it still speaks volumes to the utopian ambitions of the crypto world.

These are intriguing proposals (well, except for Bitcointopia), but as of now, crypto is full of cool-sounding ideas and few actual products. And of the blockchain products that do exist, most are massively difficult to actually use or feel like they shoehorn the blockchain into some random shit that was doing fine without it. While it's nice to imagine crypto one day leading to some kind of massive redistribution distribution of wealth, it could also saddle us with an inconvenient nightmare-world where everybody has to use a different currency for each thing they pay for and our digital pasts haunt us even more than they already do. So far, the crypto world is mostly just shaping up to be an ecosystem full of opportunists trying to game the system and make themselves garishly rich, effectively recreating the power structures that crypto could potentially replace. That lack of rules is not tantamount to a level playing field, because people can always come in and make their own rules that are just as oppressive as the ones they fled from.

Liston has seen the dark side of the moneyed crypto class firsthand — he's suing Augur for $152 million, alleging that after a series of internal clashes he was forced out of the company in 2014 and that his former colleagues have spent years trying to minimize his role in Augur's creation. On July 9, Augur's prediction market will make its debut, which may very well cause the value of both Augur's token and the company itself to skyrocket. This would mean that the wealth of those who kicked Liston out of his own company would compound, while his would not.

While it's possible that cryptocurrency could radically shift the world as we know it, without fundamental changes to its current hierarchy, the process of decentralizing our money will likely just serve to even further centralize power itself. While 0xΩ might be a genuine stab at creating a new religion or simply an absurdist art project, it might also be a tongue-in-cheek attempt to warn us of the world to come.