Over the course of millions of years, environmental pressures push species to adapt, leading to a new tail shape, a striped color scheme, or a taste for eucalyptus leaves. But in the last couple decades, researchers have found that evolution isn't just a slow invisible hand molding dinosaurs into birds. "Contemporary evolution" is also happening at a scale that is easily observable in a human lifetime, and some of those changes are actually driven by humans. In fact, a new study explores how one of humanity's biggest footprints, the massive system of roads that crisscross Earth, are driving evolution in the plants and animals that live near them.

That's not to say roads are creating new species in front of our eyes. Instead, they are driving localized adaptations that take place in relatively isolated populations. For instance, research shows that natural selection of plant populations growing in mine tailings has led to plants that are tolerant of some heavy metals or pollutants. Even frogs developing in ponds just a few hundred feet away from one another can develop different traits if one of those ponds is primarily in the shade and the other in the sun.

When Steven Brady joined the Skelly Lab at the Yale School of Forestry and Environmental Studies a decade ago, he marveled at the idea that evolution is a process happening fairly rapidly, and that it has measurable impacts on animal and plant ecology. When he started thinking about conducting a research project, he landed on one of the biggest environmental pollutants that few think about: the 17 million tons of road salt spread on streets, highways, and parking lots each year in the United States. Even as a kid in Connecticut, it occurred to him that all the rock salt on the roads draining into streams and ponds must have some sort of impact on the environment. He realized that the dissolved sodium chloride could actually be driving natural selection. "It's been shown for years now that freshwater bodies are becoming salinized by road salt. Some are even reaching concentrations found in brackish water," he says. "I thought someone had to have studied the evolutionary impact of this before."

Luckily for him, they hadn't.

Brady began a research project looking at the effect of all that salt on spotted salamanders, Ambystoma maculatum, and wood frogs, Rana sylvatica, in roadside ponds in Connecticut. In one study, he transplanted the eggs of salamanders living in salty roadside ponds within 30 feet of the road to woodland ponds much farther away from the highway. What he found is that the salamanders from both the salty ponds and the woodland ponds developed into adulthood at equal rates in the freshwater. When he reversed the experiment and placed both types of salamander eggs in a roadside pond, both populations did worse, but 25 percent more of the eggs from the salty-pond salamanders survived. In other words, the salty salamanders were better adapted to life in the briny water. 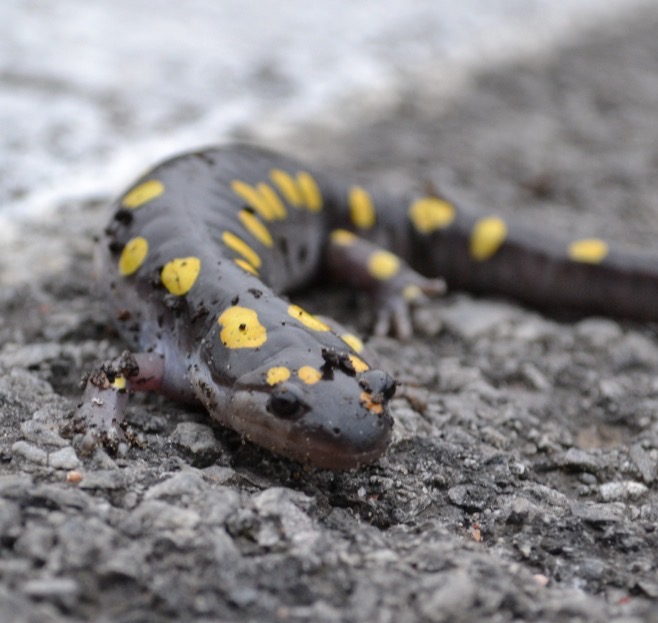 When he conducted the same experiment with wood frogs, which breed in the same types of habitats, the frogs from the roadside ponds actually did worse in both the salty and fresh ponds. What these experiments show is that human impacts on species can drive both adaptive and malaptive adaptations. Polluted conditions, for instance, pushed natural selection of salamanders to favor individuals with better tolerance for salt. In the frogs, living by the road led to a maladaption, which makes it harder for the species to cope with environmental changes.

Since Brady began his research nearly a decade ago, other researchers have begun to look at the evolutionary pressures produced by roads. In a paper in the journal Frontiers in Ecology and the Environment, Brady pulls together some of those findings. Research has shown that besides its effect on salamanders and frogs, living by roads has caused populations of sweet vernal grass, Anthoxanthum odoratum, to develop a tolerance to salt and other pollutants. In another study of cliff swallows, Petrochelidon pyrrhonota, in Nebraska, the number of birds killed by cars decreased over the course of 30 years even though the numbers of birds increased. The birds that were killed by cars, it turns out, had longer wings than other swallows, indicating that the road was quickly selecting for shorter-winged, more maneuverable swallows.

"It is striking to consider that across such different organisms—grasses, swallows, amphibians—roads have similar capacity to cause divergent evolution among local populations," Brady said in a statement. "But what is perhaps most surprising is that some populations appear to be evolving maladaptively right alongside populations that are evolving adaptively. And from what we can tell, such maladaptive outcomes may become increasingly common in response to human-modified environments such as road-adjacent habitats."

Michael Kinnison, a professor of evolutionary applications at the University of Maine who researches contemporary evolution, says Brady's study, along with other recent studies of contemporary evolution, have implications for the way humans manage ecosystems. "Historically, we've viewed evolution as a past process, and ecology is something that happens today," he says. "But if evolution is something that happens the same time as ecology, how do they interact? That's what I study."

For example, commercial and recreational fishing often takes larger individuals out of fish populations, driving the average size of individual fish down in a matter of decades. That can have unknown consequences throughout the ecosystem. "That could affect a whole community. It could reshape prey relationships or the rates of nutrients moving through a system. If evolution and ecology interact with each other almost continually, then there's a unification of the two fields."

Brady, who currently works as an evolutionary ecologist for King County in Washington State, says that understanding how human impacts, contemporary evolution, and ecology interact could help land managers and planners mitigate some human impacts on the environment. He wants to look even deeper into roads, since salt is just one possible factor. Roads also cause animal mortality (a.k.a. roadkill) and habitat fragmentation, and can bring in oil and heavy metal contamination as well as produce lots of noise. In fact, the effects of roads can stretch out up to a kilometer, which is significant considering 80 percent of the United States is a kilometer or less from a road.

"The overall point is that when we see these changes in multiple species, it's a profound reflection on human activities in the world," says Brady. "Our actions are having indirect consequences that are changing wild organisms. It's happening all the time, whether you're commuting to work at 70 miles per hour or strolling down the sidewalk."