For most of the developed world, internet access is a given. Google, Amazon, Facebook offer a privileged world of communication, entertainment, shopping and education that many of us take for granted. Unless, that is, you happen to be incarcerated.

Aside from limited connections at a handful of juvenile detention facilities, there's no way for America's 2.3 million inmates to access the internet. Worse, institutions may punish inmates when their families post online on their behalf. Prison authorities cite concerns that inmates will use the internet to harass victims or threaten witnesses, arrange for deliveries of contraband or commit new crimes online.

Digital education is safe, cheap, effective, and one thing we can do to make us safer and save taxpayer dollars

But in a world increasingly defined by technology, denying internet access makes it harder for inmates to prepare for life on the outside, notes Dave Maass, investigative researcher for campaign group the Electronic Frontier Foundation (EFF). It makes it harder for inmates to report on conditions inside prisons or communicate with their families - and also contravenes the May 2011 declaration by the UN that internet access is now a fundamental human right.

Internet access is simply not a top priority for most activists, says David Fathi, director of the ACLU National Prison Project. Most of his work is concerned with making sure prisoners get basic medical and mental healthcare, and making sure prisoners aren't attacked by other inmates or staff. Yet prisons do have an obligation to maintain inmates' first amendment rights, and being internet savvy is rapidly becoming an essential survival skill. "If you want prisoners to succeed, go straight, and get a job when they get out, it doesn't make sense to cut them off from an increasingly essential part of the world," Fathi adds. 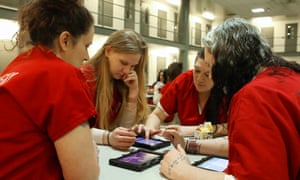 Inmates using tablets from Edovo, a company that distributes a basic tablet to a dozen states across the country. Photograph: Edovo

Ryan Baxter is serving a 10-year sentence at North Dakota state penitentiary for possession of drugs with intent to deliver. He uses a tablet PC to stay in touch with his family. His parents visit every few months, but his primary contact with the outside world is via email, which he creates on the tablet then uploads via one of the prison's kiosks. He uses his tablet for between two and fours hours a day, mostly to listen to music or play games. But email, he says, is his lifeline.

"If I get a little depressed or have thoughts I need to get off my chest, I can sit down and type them out on the tablet without having to wait in line at the kiosk," he says. "Most of my family is on the west or east coast, so email is great for inmates like me who don't have as many physical visits with their family."

Some inmates manage to work around these restrictions to publish online. Chelsea Manning, serving 35 years in for leaking more than 700,000 government files to WikiLeaks, publishes regularly on Medium (and also contributes to the Guardian) by relying on supporters to post them for her. "Her articles are either dictated over the phone or mailed as letters," writes Melissa Keith of the Chelsea Manning Support Network. "Comments to her pieces are read aloud to her on the phone or printed out and mailed back to her."

Barrett Brown, serving more than five years in federal prison for his role in the 2012 hack of the Stratfor intelligence firm, regularly publishes on the Intercept using the federal prisons' private email system. Every message is read and approved by prison officials before it is transmitted. "Back when Barrett was in the hole - and thus without email or phone access - he used to send the column on paper, handwritten in pencil," adds Roger Hodge, the Intercept's national editor.

Many prison systems prohibit any internet activity other than email, and some states ban inmates from Facebook - even banning friends or family from posting on their behalf.

In February 2015, EFF issued a scathing report detailing how the South Carolina department of corrections punished nearly 400 inmates for "conspiracy, aiding, [or] abetting in the creation or updating of an internet web site or social networking site". The average punishment for accessing social media is 517 days in disciplinary detention, the report claimed. In the most egregious case, inmate Tyheem Harris received 37.5 years in solitary confinement - far exceeding the amount of time he'll spend in prison - for making 38 posts to Facebook.

Alabama, Indiana, Maine, New Mexico, North Dakota and Texas also restrict prisoners from having active social media accounts, while Facebook's own terms of service forbid friends or family members from managing an individual's account. Since EFF's report, Facebook has made it more difficult to remove inmates' pages, and now requires legal authority to remove accounts or proof of a potential safety risk.

'A drop in recidivism'

Despite the US correctional system's aversion to change, technology is slowly making its way between the bars. Over the last two years, companies including American Prison Data Systems, Edovo and JPay have begun to distribute basic tablet computers to thousands of inmates, offering educational and entertainment content which, they say, can help improve behavior and reduce the chances of recidivism. 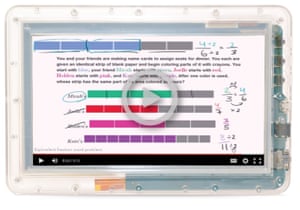 The JPay tablet, used in some US prisons. Photograph: JPay

JPay has distributed 80,000 of its JP5S tablets to US prisons, and claims an immediate "improvement in prison culture and a drop in recidivism". A modified 7in Android tablet, the JP5S looks like a less colorful version of a tablet designed for preschoolers, but with a clear case that prevents inmates from hiding contraband materials inside. It is preloaded with 20 apps including email, an ebook reader, music player, games, tutorials on how to develop job skills and handle money and a selection of educational videos.

At North Dakota state penitentiary, a maximum security facility for men, nearly 700 inmates use tablets made by Florida-based JPay for communication, entertainment or education, says deputy warden Troy Schulz. Inmates plug their tablets into one of the prison's 14 kiosks to update their messages, music and games. They are limited to 15 minutes, though the prison offers extended access as a reward for good behavior, says Schulz.

Since the program launched in October 2014, more than 1,000 inmates have used the specially modified Samsung tablets, which offer access to educational material from a dozen sources including Kahn Academy, Brain Pop and TED Talks. The tablets connect to a secure private network, are monitored remotely 24/7 and can be immediately shut down at the request of prison officials, says Chris Grewe, CEO of American Prison Data Systems (APDS).

"Until recently, correctional institutions were surrounded by a digital moat, isolating the people inside," says Grewe. "We're trying to build a bridge across that moat. But first we had to convince prison officials we'd developed a safe and secure platform that could let the good parts of the internet in while excluding the bad things." 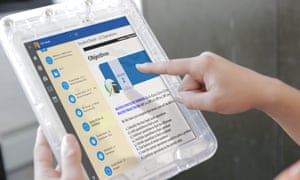 Edovo's tablets, secured and encased versions of the 7or 8in Samsung Galaxy Tabs, are used in a dozen states across the country, says CEO Brian Hill. Each morning they're distributed to inmates, who earn points by taking educational and rehabilitative courses, and can spend those points later on games, music or videos.

Hill says the company wants to help reform the criminal justice system by "bringing thousands of hours of educational content and drug treatment programs to inmates on a daily basis". 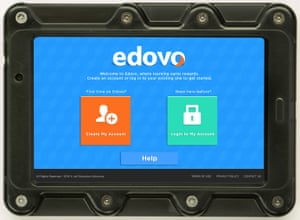 Current prison email service providers typically charge between 5 cents to $1.25 per message, according to the Prison Policy Initiative.

JPay charges prisoners and their families $120 to buy the tablet, 35 cents to send and receive an email message and about $10 for a 30-minute video message. Some state prison systems charge JPay to operate inside their walls. JPay declined to say how much, but said most states spend the money on sports equipment for inmates.

"They charge an arm and a leg for crappy substandard service," claims Paul Wright, director of the Human Rights Defense Center, who accuses companies like JPay of "monetizing human contact". "And they're giving kickbacks to government for monopoly contracts to financially exploit people in captivity."

Every prison should be connected, but I fear they wouldn't secure it properly. All you need is one message to a victim

A JPay spokesperson said: "JPay works with facilities to implement comprehensive, systematic platforms and infrastructures to make technologies available to inmates so they can stay connected to their loved ones, as well as educate and rehabilitate themselves. We spend our own money to deploy that infrastructure and conduct ongoing maintenance, therefore there are fees associated with using our products and services."

Steve Good, director of the Five Keys charter school, estimates that the APDS tablet program costs from $85,000 to $100,000 a year, funded largely by grants from the California Wellness Foundation. APDS is a for-profit Public Benefit Corporation, requiring it to weigh the social impact of its actions against its potential profits.

Edovo leases its tablets to municipalities for $1.25 to $1.75 a day, with fees often paid through the facility's inmate welfare fund. "All of society benefits hugely from investing in educating the incarcerated," says Hill. "Digital education is safe, cheap, effective, and one of the few things we can do that will both make us safer and save taxpayer dollars."

The problem is that many prison officials are wary of technology and risk averse, says Edovo's Hill. "Every prison should be connected," he says. "But if prisons gave unfettered internet access to inmates today, I fear they wouldn't know how to secure it properly. Then all you need is one inmate to send an improper email or Facebook message to a victim. When that story makes the front pages, the prisons will use that data point to make sure no one ever gets connected again."

And that leaves millions of Americans not only incarcerated in a cell but also frozen in a pre-internet world, says EFF's Dave Maass.

"This is how people communicate in 2016," he says. "We're making fewer calls, and do most of our communications through instant messaging, Facebook and other types of social media. There's a better chance of rehabilitation if inmates are allowed to communicate in the way people do it in the 21st century."