On December 30th, a video circulated online of Azealia Banks, clad in safety goggles and a headscarf, surrounded by feathers and black junk. "Three years' worth of Brujería," Banks says panning the room, before turning the camera back on herself. At this point she's holding a sandblaster and ends the video by saying, "Real witches do real things." Almost immediately, writers from XXL and Page Six began their reports with comments on Banks' oddity and insanity. Sure, not cleaning a room after three years' worth of chicken sacrifice is cause for concern, least of all for the smell, but the knee-jerk reaction to call Banks crazy are sensationalistic at best, stigmatizing at worst, and completely typical any way you slice it.

Banks is initiated in Palo Mayombe, a traditional African religion brought to Cuba from Congolese slaves. It is a belief system built on the veneration of spirits and the importance of the earth's natural forces, and it's one that Banks has urged black women in particular to join in order to overcome institutional powers like white supremacy. That message was lost in part because non-Abrahamic religions remain misunderstood, but mostly because anything Banks does is undercut by her persona of instability and insanity. In a Facebook post made days before the witch video emerged, Banks herself acknowledges all this, ultimately bemoaning the public's misunderstanding of mental illness and psych-drug side effects. She's sang about these struggles before, like she does on the Broke with Expensive Taste track "Soda."

Black artists struggling with mental health issues are nothing new, but shifting empathy emerged late last year in the wake of Kid Cudi's admission of mental health issues and Kanye West's hospitalization. The former's Facebook post inspired hashtags, such as #YouGoodMan, and op-eds in the Washington Post and the Huffington Post alike, positioning Cudi as a way to shed light on the hyper-masculinity problem facing male hip-hop stars. So why was Banks' post about the same exact topic almost entirely ignored by the media? To borrow a turn of phrase from Jamilah King, Banks has been "permanently exiled to the land of broken black bitches, the place inhabited by pioneering black women who aren't perfect and have neither the interest nor resources to hide that fact." 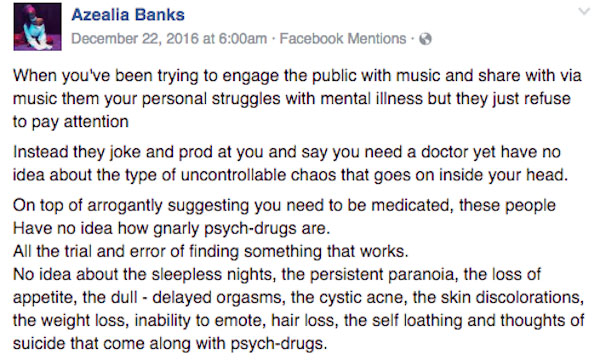 Like West, Banks' pro-black politics have been both complicated and controversial. For Kanye, it was saying that George Bush doesn't care about black people back during a Katrina benefit, to urging black people to stop worrying about racism 11 years later, to admitting that he would've voted for Trump (had he voted at all). Banks' own assertions have run a similarly jagged course but in a shorter time frame: feuding with Iggy Azalea over cultural appropriation between 2012 and 2014, refusing to date black men in 2015, and offering to perform at Trump's inauguration, perhaps precisely because he's "a piece of shit." Commentators at The Ringer and Slate, among others, have rationalized away Kanye meeting's with Trump as pure provocation. It would be difficult to see someone doing the same for Banks, though her music and persona are as much about thorny prodding as West's. But her audacity is often compartmentalized, deemed appropriate through the music (which often has been critically praised) but not through her unfiltered interactions with the world.

Early on in Banks' career, Spin's Zach Baron implied that her "brazen ambition" would do her more harm than good in the music industry. And perhaps to an extent, he was right. Banks did not introduce herself as the latest competitor for the female token that mainstream rap allows, but rather, someone who had already succeeded by her own metrics—by being a "rude bitch" and brazenly pursuing her sexual desires, even among male rappers she could best. Whether fabricated or real, this no-fucks-given persona was necessary armor for Banks. In a now-deleted Instagram post, she stated that black people, particularly black men, told her how "ugly," "skinny," and "weird" she was, yet whenever she speaks out on this belittlement, she's deemed the crazy one.

When Banks fought with Jim Jones over his supposed appropriation of the word "vamp," he responded by calling her a "2bit slore." Angel Haze misinterpreted one of Banks' tweets about non-New Yorkers claiming New York and called her a "charcoal-skinned bitch." Both jabs reinforced what Banks told the public about her mistreatment in the industry, but they were overlooked because her combativeness was a more interesting story—a woman who was becoming too big for her britches before she paid her dues. Banks' anger as a form of spectacle has led her to publicly denounce not only mainstream publications, but black-centered ones like Ebony as well, for only focusing on her feuds rather than her career as a whole.

Admittedly Banks has made her fair share of racist, homophobic, and otherwise offensive remarks across social media. It should go without saying that she should be held accountable for her ongoing actions, including lashing out at gay men and purported copycat Zayn Malik (whom she called a "hairy curry-scented bitch" and a "Punjab"). These comments (and others), along with assault charges on a security officer and a flight fight, had a calamitous effect on her career. Besides being suspended on Twitter and Facebook, Banks was booted from the London festival Born & Bred as well as her U.K. booking agency. And according to Dazed, Banks' feud with Perez Hilton led to her being dropped by MAC Cosmetics back in 2012. Is Azealia Banks simply an uncontrollable woman who destroyed her own career, or is there something else at play as well?

In an interview with Broadly, Banks found a parallel in Kanye: "I'll say something on Twitter and my head gets ripped off. And then Kanye West will say some other fucking meaningless, senseless dumb shit. And then it's like oh well, you know… he's just an artsy man. He's just fucking cool. It's frustrating." Unlike Banks, West's rants both online and onstage are given the privilege of walking the line between genius and madness: look at articles in Billboard and USA Today that position Kanye as an artist whose misunderstood brilliance atones for his transgressions. Obviously his strong body of work is a bit more extensive than Banks'—that is not the point. It's that this kind of conversation represents a privilege afforded to male artists throughout history, from Van Gogh to Dostoevsky to Poe, to name just a few dead white guys. Their male status in the world not only allowed them to be accepted as successful artists, but it afforded them fluidity in this genius-madness dichotomy. There seems to be a bit less of that among black female creators; look at how the genius-madness scale has tipped within conversations about Nina Simone and Lauryn Hill over the years.

Banks is not at this genius place yet, but there's little chance she could ever get there if the world writes her off as a crazy villain first. And when she comes correct, the results can remind you why "212" grabbed the world's attention in the first place. Her refusal to shut up (for better or for worse) doesn't make her a likely candidate for a public sympathy campaign, but that's more simplistic than what she actually needs or probably wants. Just as Kanye and Cudi were afforded a small bit of sensitivity around their mental states—some modicum of awareness that they could be dealing with something we don't understand—so too does Banks. Between her online feuds these last few years, Banks has been talking about these struggles. That's not what we've heard, though.