Unlike the 2003 Lakers, these four Warriors stars are all in their prime—and no two of them hate each other as O'Neal and Bryant did.

Unlike the 2012 Lakers, these Warriors have complementary skills—and no one as immature as Howard.

There should be no power struggles. Curry, Thompson and Green heavily recruited Durant. They wanted him, with all his offensive pyrotechnics, on board.

And unlike the 2010 Heat, the Warriors did not have to tear down their roster to add an MVP. The Warriors' core has been together for years, with a championship and two consecutive conference titles.

That makes Golden State the best team ever to add a player this great, period.

"This is, like, unbelievable," said Jack McCallum, the former Sports Illustrated reporter, who has been covering the NBA since 1985. "This is something that I don't think we've ever seen, adding that kind of player to that kind of team."

This is like adding Hakeem Olajuwon and Reggie Miller to the 1990s Bulls—after Michael Jordan and Scottie Pippen had won a title or two.

This is like adding Ray Allen and Kevin Garnett to the Shaq-and-Kobe Lakers.

This is a whole new level of superstar gluttony. And it shouldn't even be possible.

How to Break Up a Superteam: Return of the Rules

NBA owners were fretting, fuming. A big-market powerhouse, with a recent MVP and multiple stars, signed another MVP and proceeded to crush the competition. Worse, the team had a payroll that dwarfed most of the league.

The Philadelphia 76ers, powered by Moses Malone and Julius Erving, promptly cruised to the championship in 1983.

But by the time they did, the NBA had adopted a rule aimed at preventing more superteams: the salary cap.

The virtue of a cap was clear: If every team had the same spending limit, no franchise could hoard the best talent. Stars would be dispersed across the league, creating a semblance of competitive balance.

"Before the salary cap, you could pay guys anything that you could afford, and the feeling was that it would be bad for competition," said longtime NBA executive Rod Thorn, who was general manager of the Bulls in 1983. "The big markets and the big teams would get all the big players."

In their championship season, the 76ers had a $5 million payroll, about five times that of the last-place Indiana Pacers. Teams in New York and Los Angeles were also spending wildly, warping the market for everyone else.

The cap addressed that problem, and over time the league would keep adding new measures to promote competitive balance: Bird rights, named after Larry Bird, to ensure every team could keep its best players; and a luxury tax, to further rein in the top spenders.

The system was never perfect, but it generally had the desired effect. Superstars rarely changed teams as free agents. The best teams rarely had the means to add an elite player. And it was virtually impossible for a team with three stars to add a fourth.

Until now. Until the Warriors signed Durant. 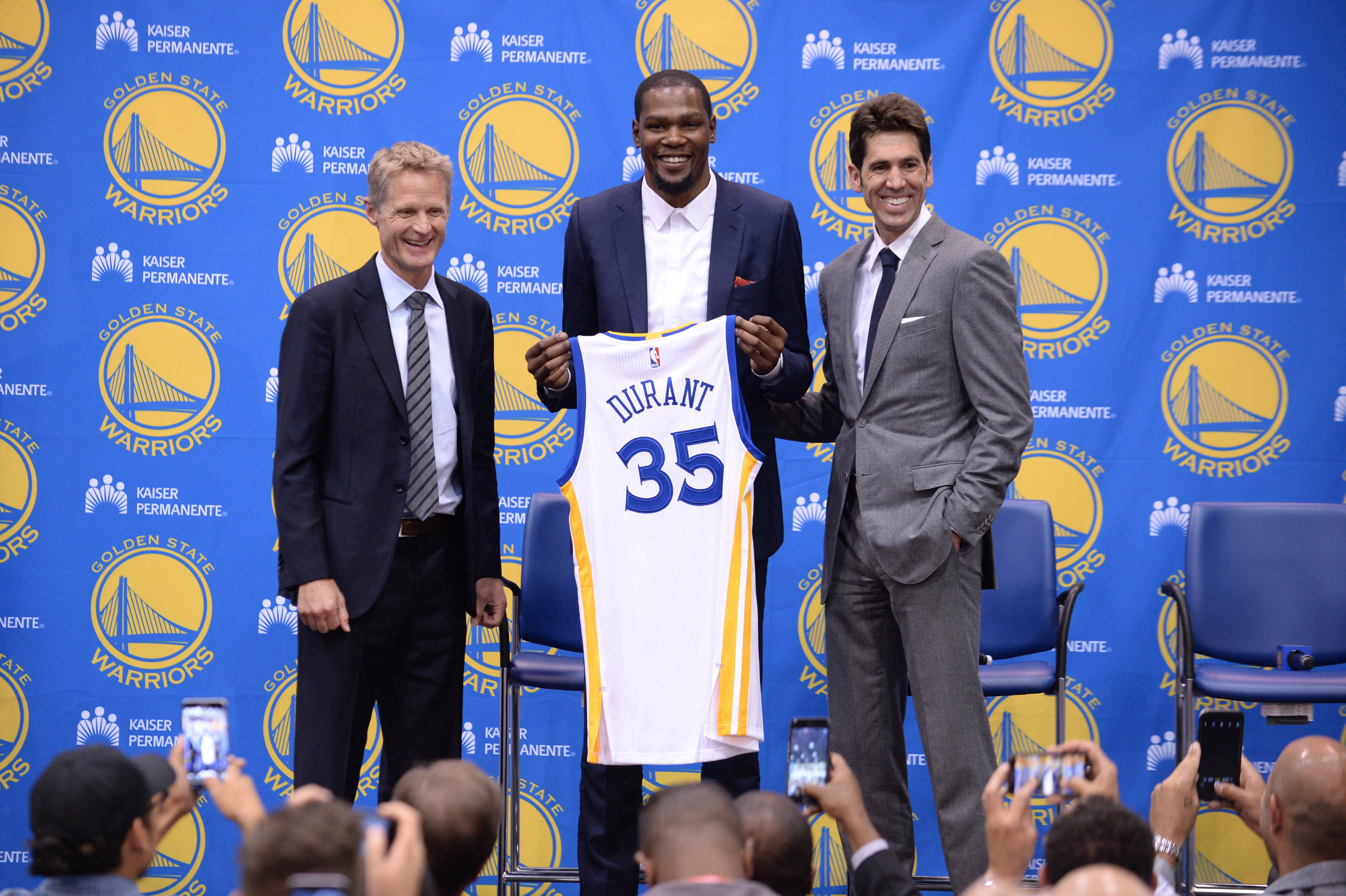 NBA officials don't like to admit it, but what happened this Independence Day undermined everything they constructed over the last three decades.

There are only so many stars to go around, and they are clustering in fewer and fewer places: four in Oakland, three in Cleveland, three with the Clippers…and zero in many other markets.

"I don't think it's good for the league, just to be really clear," Commissioner Adam Silver said in July.

To those claiming a Warriors-Cavs rematch was great for business, the commissioner retorted, "Try telling that to the 430 other players who aren't on those two teams." (Silver declined an interview request for this story.)

But it took a series of anomalies and unforeseen twists to make Golden State's Death Star possible in the first place.

The Warriors only had room to sign Durant because of an unprecedented 34 percent spike in the cap—and because Curry is playing on a below-market deal signed in 2012 when he was a borderline star with fragile ankles.

"The spike was such a big blow to the league," one team executive said. "Two or three teams got helped. Everyone else got crushed."

Even then, Durant might never have left Oklahoma if not for a series of postseason twists.

What if Durant's Thunder team had beaten the Warriors in the conference finals, instead of blowing a 3-1 lead? What if the Warriors, who blew a 3-1 lead in the Finals, had won the championship? Durant has hinted the outcome might have been different.

What's more, we might never see a superteam like this again. Because anomaly or not, changes to the system are coming:

"They're going to go back and clear things up that enabled this to happen," one general manager said.

A hard salary cap might fix everything—by making it virtually impossible to pay multiple stars their market value—but the players union has successfully killed every such proposal. Some teams want an NFL-style franchise tag, but that too is anathema to players.

Sources expect the new agreement to be finalized and announced well before December 15, the deadline for either side to opt out of the current deal.

As Silver said in July, "I think we do need to reexamine some of the elements of our system so that I'm not here next year or the year after again talking about anomalies."

How to Stage a Basketball Coup: Revenge of the Rest

What is fandom without belief? What is sport without suspense?

We root because we believe our team has a chance. We watch because the outcome is a mystery. Lose belief, lose the drama, and you lose everything that draws us to the game.

These are the existential questions confronting the NBA right now. No one—outside of the most ardent contrarians and true believers—thinks anyone but the Warriors has a chance this season.

"I can't think of any time it was this overwhelming," said the executive with the likely Western Conference playoff team. "For the casual fan, it's bad."

In a normal year, four to six NBA teams might have a realistic shot at the title when the season begins. The '80s may have been dominated by the Lakers and Celtics, the '90s by the Bulls and the 2000s by the Lakers and Spurs. But there have always been worthy rivals and some sense of suspense on opening night. This year is different.

No one interviewed for this story—no scout, no coach, no GM, no analyst—predicted any outcome other than a Warriors-Cavs rematch in June. (Indeed, several bemoaned that the league is now rife with mediocrity.)

Suspense? "The suspense is this: What days are [the Warriors] going to give these guys rest?" said the Eastern Conference coach.