"After six long years, can the Ministry of Admissions keep us safe?"

That newspaper headline greets you at the beginning of Lucas Pope's Papers, Please. The borders of the fictional post-Soviet autocracy Arstotzka are opened for the first time in years, and you are one of the everyday citizens tasked with securing your nation's borders. Every day, there are new rules limiting who you can allow into the country. You will deny far more people than you admit.

Papers, Please's relevance has only grown in the four years since its release. We are more than two months removed from Donald Trump's first attempt to implement his Muslim Ban—an executive order barring immigrant and refugee status to residents of seven Muslim majority nations. The ban is dying in the courts, but the situation for many immigrants in America is still a nightmare.

ICE officials are amping up raids on undocumented immigrants across the nation. Even "sanctuary cities"—cities that actively provide refuge to undocumented immigrants—are being actively targeted by the current administration. It's a surge of state-sanctioned cruelty, and being daily executed by working class government officials. People whose hopes, fears, goals, and lives may not be so different from yours or mine.

Papers, Please is an honest examination of the practical limits of resistance for anyone working in immigration and a demonstration of how oppressive states use bureaucracy to obscure their abuses. The increasingly complex rules for who you admit to Arstotzka don't just exist to arbitrarily increase the game's difficulty. 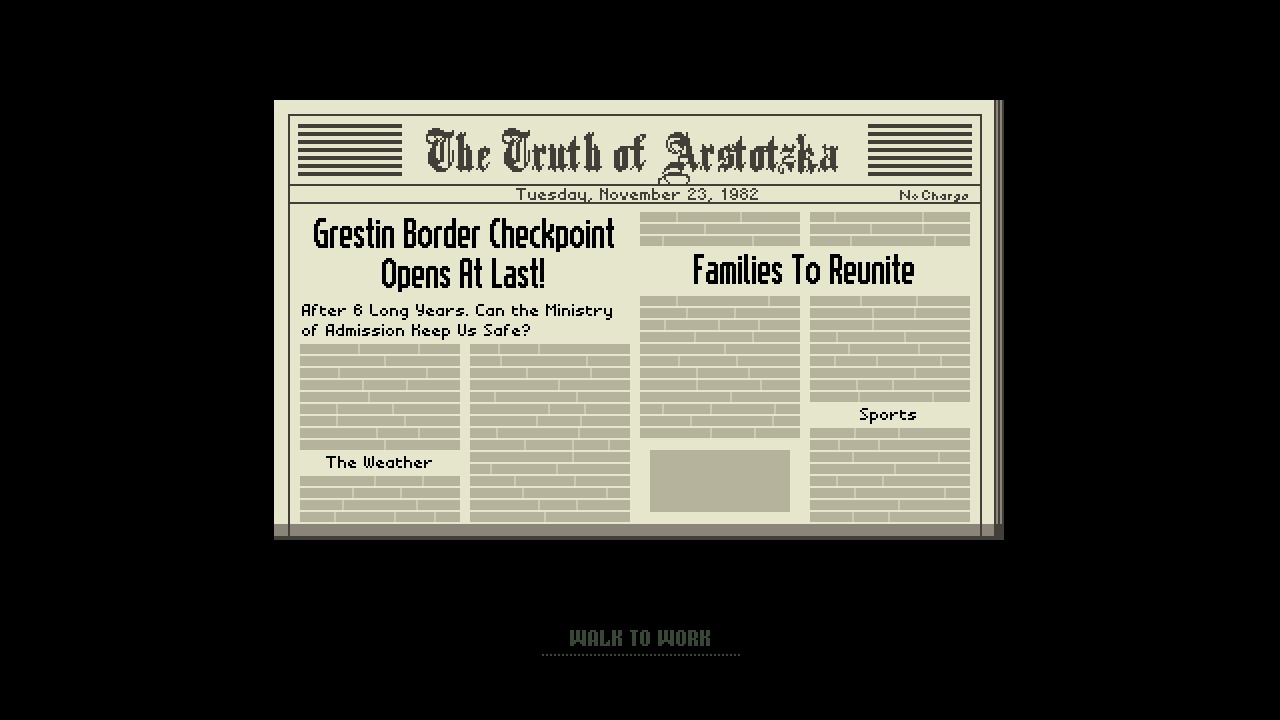 All Papers, Please screenshots courtesy of 3909

It's a bureaucracy suffocating you under an avalanche of regulations, guidelines, and checklists so you don't have time to think about the "why" of what you're doing. The legalistic framework surrounding every aspect of your life and job serves to separate you from your own morality, replacing it with a series of rules and regulations. You may have been assigned a job without consent, you may have to screen refugees and immigrants according to nonsense criteria, and your family can be forcibly relocated at any time... but it's all legal. And if you have a moral problem with any of those laws, confronting them makes you a criminal.

A state that requires self-immolation in the act of genuine resistance is a state designed to enforce compliance. Part of Papers, Please's power is that it doesn't offer you a heroic path out of your dilemma. There are no good options: you're either enforcing these rules and therefore you become part of the problem, or you are doing what you can to subvert those rules, and in doing so, you put your life and the life of your family at risk. All for seemingly meaningless results, since you have so little agency as an inspector that any commonplace acts of defiance seem futile.

The bureaucratic grind of your border inspector's life is compounded by how devastatingly poor you are. If you aren't fast on the first day of the job (where the rules about who to admit are their most simplistic), you're liable to be dangerously low on money very quickly. Papers, Please has 20 separate endings, and only one of them involves your inspector managing to more or less successfully complete their mission. The majority of playthroughs will find you in an impossible position.

The severe poverty of Arstotzka and Papers, Please's intentionally oversized portrayal of despotic overreach can strike many Western players as a profoundly alien experience, but many of the structural hurdles your border agent faces are written into the marrow of Western democracies as well.

Even before Donald Trump, American immigration policy was a labyrinthine horror show of red tape. ICE as a tool for targeting the most vulnerable immigrants en masse predates Trump as well. We're only seeing it utilized now as a larger scale vehicle of state terror. The key difference between your inspector in Papers, Please and the federal agent staffing an airport checkpoint is that your inspector never signed-up for any of this. You were forced to become a cog in this machine. 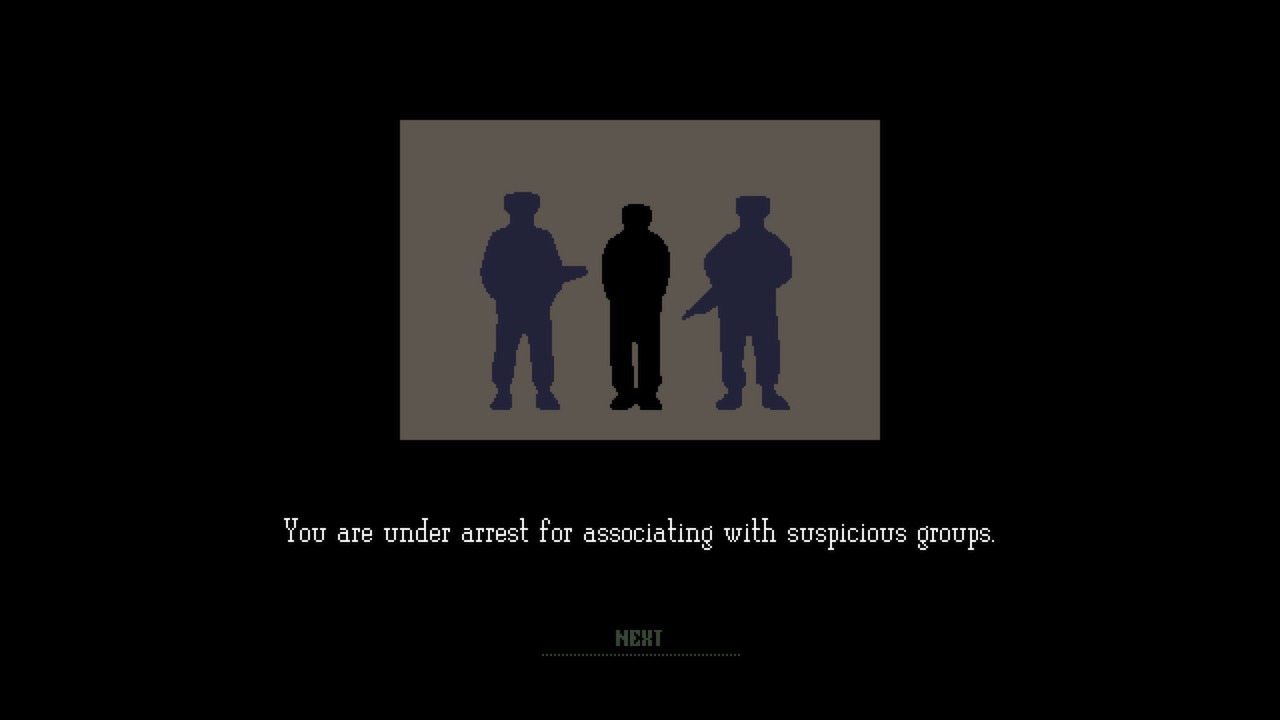 In most liberal democracies, the people carrying out this violence self-selected. They chose this career in spite of the fact that it puts the humanity of immigrants behind rules and regulations, and perhaps even because of it. Meanwhile, even professed liberals can accept the legitimacy and benevolence of repressive policies if they're couched in enough technocratic wonkery and appeals to rules. It doesn't—or didn't, until recently—seem all that bad because unlike in Papers, Please, the system is always able to hold out the promise of rewards and a better life if you play by the rules, however malicious or incomprehensible they might be. The costs fall on other people, to whom the system isn't beholden.

Economic precarity in America isn't the all-consuming existential nightmare that it is in Arstotzka, but glossing over how dire the economic situation is in America right now doesn't do anyone any favors. When Donald Trump escalates ICE presence in America, he's finding ways to give a lot of people jobs. Hate becomes food on someone's table. That's a powerful motivator.

Papers, Please is a meticulously designed reminder of the monstrous consequences of a political system that starves citizens of agency.

We can tell ourselves that we can't be compelled to support despotism. We remain free to exercise our moral judgment. But in the real world, and not one of decaying American idealism, there are almost always consequences if you're a government employee and you attempt to subvert state oppression.

Sally Yates could afford to make the public stand she made. When she became the first acting attorney general to be fired since the end of Richard Nixon's presidency, she departed a job with her professional integrity intact alongside a massive number of professional qualifications, and gained a massively increased public profile. If you were a customs agent that didn't support the law in the hours between Trump's initial implementation of the ban and the courts rejecting it, was your choice that simple? If you've got kids or any other dependents, can they afford your principled decision? Or are you, in spite of all our alleged freedoms and opportunities, in the same position as that luckless Arstotzkan official in Papers, Please? 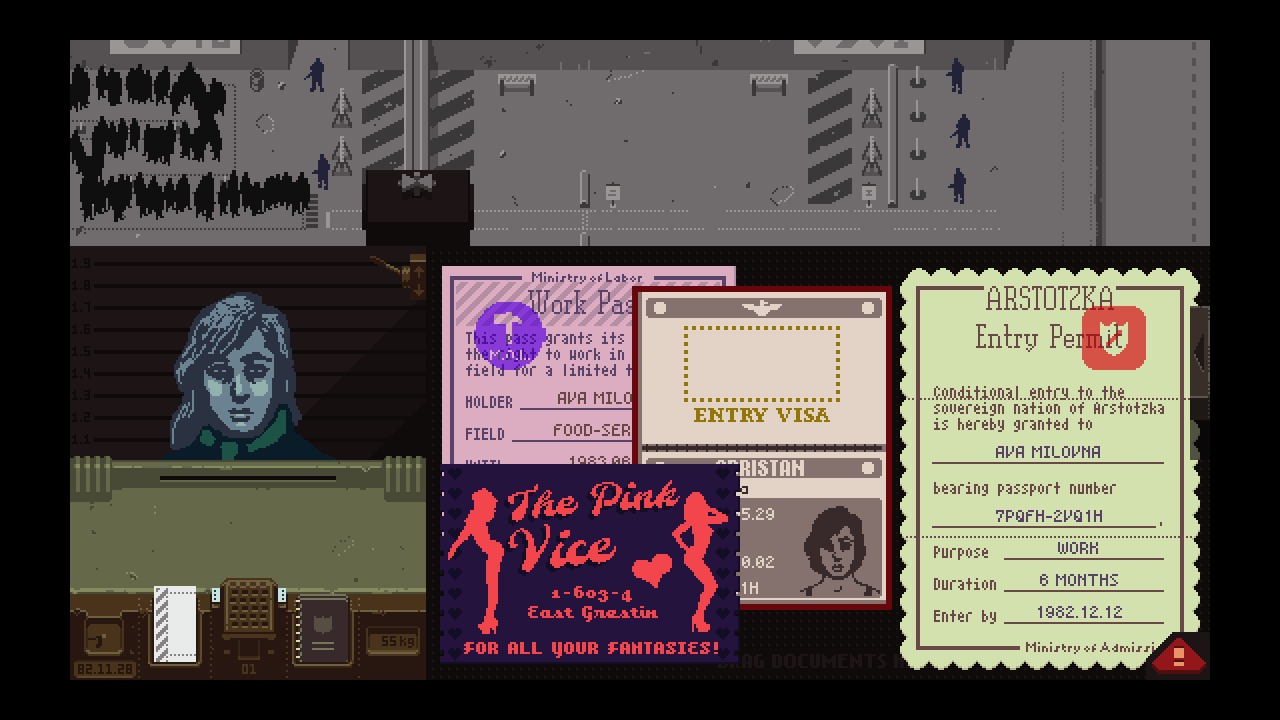 Solidarity against oppression is what we all have to strive toward, and we should accept no substitutes even when there are personal costs. That's the choice, and you either make it or you accept your own comfort at the cost of someone else's suffering. However, right wing populism is designed to drive wedges in that solidarity. In a nation that has failed to reckon with how deep the roots of racial and religious prejudice still remain, how surprised can any of us be that Americans are choosing paychecks over the basic humanity of Muslims, undocumented immigrants, and anyone else left behind by the capricious whims of our current administration.

Papers, Please doesn't shy away from how uncomfortable many of us find revolutionary violence to be, and EZIC utilize violence to achieve their means. If you align with EZIC, you're consenting to violence against the state. You are declaring war on it and all the people who support it and it's clear that other, less-responsible folks will wind up as collateral damage. Even if you think EZIC's cause is justified, there's still that momentary pause when you decide to make yourself complicit in it. Perhaps violence should never feel right even when it is.

Papers, Please is a meticulously designed reminder of the monstrous consequences of a political system that starves citizens of agency. In the game, you die, you barely scrape by as a collaborator, or you develop a sense of revolutionary solidarity.

Western "liberalism" is designed to deny citizens any clear understanding of that machinery of the state. The folks that work in government buy into the prevailing winds that are driving that particular service, and the rest of us never see their inner workings. But we do have that access occasionally when we look hard enough, and when we get those brief glimpses, they rightfully make us mad as hell. America isn't Arstotzka. We've got a legal system that (for now) still hears and responds to our protests. But Papers, Please reminds us that when that system becomes unresponsive, angry citizens lose their peaceful outlets for complaint and radicalization is soon to follow.