When I performed this trick with a friend at a party, some people were still nagging me to explain it a week later.

To an observer, it looks like this. The magician is blindfolded and faces a wall while his confederate goes around the audience, asking people to place on a tray any random items that they happen to be carrying with them. Coins, eyeglasses, wrist watches, credit cards–anything at all. Audience members also have the option to select playing cards from a deck.

Magician: "I think it's some kind of money."

Magician: "But it's not cash. It's–a credit card."

Magician: "It's not a Visa. No, it's an American Express card."

Confederate: [Says nothing, holds up the next item.]

Magician: "That one was easy. Ah, now you've got a playing card."

The secret is in the way that the confederate answers each guess. Four responses are possible: "Yes," or "Right," or "That's right," or nothing at all. Each response seems to be referring to the previous guess, but actually it tells the magician what the *next* guess should be.

The audience is focusing on the magician, who feigns extreme concentration in a dramatic effort to tap the psychic waveband.The confederate's casual acknowledgements seem irrelevant by comparison, but of course they are the core of the trick.

You can see this as a logic tree, with four options at each level. Theoretically this means that a sequence of only three guesses can branch to a total of 4^3 or 64 outcomes.

How can the magician and the confederate maintain a secret code that will identify every item that someone may be carrying? Mulholland reasoned that there's only a limited range of common items, and if a few from outside that list are placed on the tray, the confederate can just ignore them. The typical ones are arrayed in a set of tables which the confederate and the magician must memorize. This is not as difficult as it sounds, because the tables are organized logically.

Mulholland's original tables identified items such as silver dollars and cuff links, but they omitted credit cards, which were rare in his day, and handheld devices, which were unknown. I've modernized his tables, as shown below. Note that the playing-card table requires four guesses, rather than three, to zero in on a particular card. For example: "It's a playing card . . . it's a spade . . . it's a court card . . . it's the queen of spades." 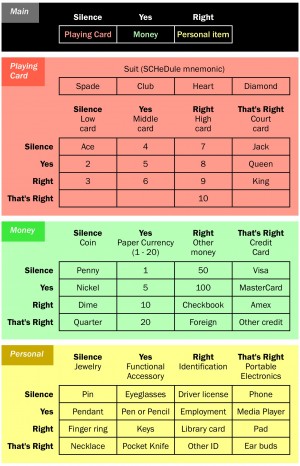 You can customize the tables yourself, and expand the range of possibilities. For instance, in the "Main" section at the top, "That's Right" is unassigned and could relate to a whole new table of drug-store items, from lip gloss to breath mints.

If the number of guesses for every table is increased from three to four, the theoretical total number of items would reach 256. This would enable the magician to become psychic to a truly remarkable degree, as in: "It's a personal item . . . an electronic device . . . a music player . . . an iPod Nano!"

But suppose you go even further and use a sequence of five guesses. You could also expand the recognized set of confederate responses from four to five (perhaps by allowing the word "Correct," or by distinguishing between different intonations). Now you can get really specific. After identifying an iPod Nano, you can say what color it is. Just bear in mind that the more complicated you make the trick, the more risk there is of an error.

And what happens if you do screw up? When the magician is wrong, there's no way the confederate can say "That's right" to cue him for the next item. Well, as is customary when you encounter a fatal error, you have to reboot the system–perhaps by prior agreement that the next item will be some kind of money, as at the beginning of the trick.

A professional magician would see through all this, but for the rest of us, it can be a source of puzzlement and fascination — so long as your guests haven't read about it on Boing Boing, of course.