Why do no gay people look like me? Jamal Jordan, a black digital editor at The Times, lamented growing up. So as an adult, he decided to give a gift to his younger self: the imagery of queer love.

Photographs and Text by Jamal Jordan

As a child, I thought all gay people were white.

By the time I was 18 and living in Detroit, being gay was no longer a "problem" for me. I was out of the closet, and my family and friends were supportive, even encouraging. Yet, as I set off for college, and grew more comfortable calling myself an adult, a man — a gay black man — I was convinced that no one would ever date or love me.

Growing up, I had rarely seen queer characters of color in the gay young adult books I read, in episodes of "Queer as Folk" I watched or issues of "XY" or "Out" magazines I stealthily bought at Barnes & Noble.

I spent most of my teenage years believing that love between two black men wasn't even possible. To my queer white peers, an entire world of change was unfolding: Public support for same-gender marriage eventually lead to its legalization nationwide, and queer people were appearing as the leads in more TV shows than I could ever watch. People even won Oscars for directing movies about gay white cowboys.

How can you believe in something you've never seen?

In the decade since, the wave of change has continued. And yet: I can't think of a single high-profile example of a loving relationship between two queer people of color.

Despite taking the time to learn to love myself, building the courage to drape myself in a body-length rainbow flag and march in the Pride parade, I still didn't know what it would look like — feel like — to receive love from someone who looks like me.

Or, more important, how to give it.

So, I embarked on an adventure.

As a visual journalist, I believe pictures can connect with people in a way that other forms of media can't. To this end, I decided to give a gift to my younger self: the imagery of queer love I've never seen. Queer love in color. 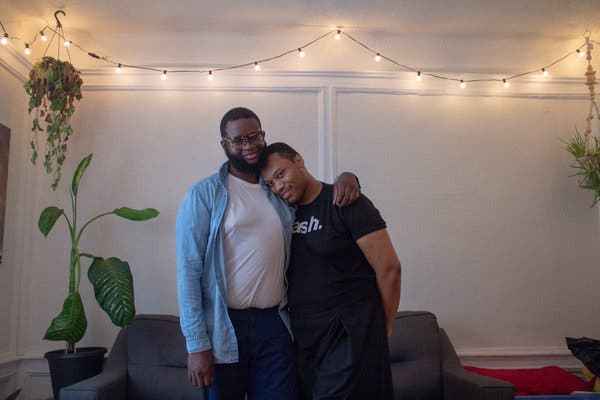 Marquis, left, and Hassan at their apartment in Brooklyn.CreditJamal Jordan/The New York Times

It was early on a Saturday morning and neither Marquis nor Hassan had eaten.

Their relationship has taken them on adventures across the world. They've supported each other through parent visits, financial hardships and hospital trips.

Standing for a few photos with empty stomachs was nothing.

After I'd gotten my pictures, and Marquis, 29, had escaped to the kitchen to make breakfast, Hassan, 27, staring into space deep in thought, broke the silence.

"I think it's important for black folks to know that we can come together and love each other in intimate, romantic, spiritual ways.

"The media will have you believe that it's literally impossible to see two queer black folks in love. But it happens."

Cyree, left, and Azure, both late for appointments, outside of their home in Brooklyn.CreditJamal Jordan/The New York Times

After growing up in an abusive household, Cyree then escaped an abusive relationship. After that, how do you love?

"The only reason, four years later, that I'm able to get married, is that I had to learn to love myself," Cyree said, emphatically, Azure holding their hand. "Only then could I make decisions as though I liked myself."

They are currently searching for a wedding venue.

Cyree, 29, and Azure, 33, identify as trans-masculine, and their commonality of experience, as Azure said, makes their relationship feel particularly like "home."

Do you have any advice for other trans couples?

Cyree, suddenly serious, said don't get caught up in other people's conception of "love."

Dom and Nick have attracted over 10,000 Instagram followers by chronicling their relationship and eventual marriage.

They have dated since high school, though if you asked them, they would say those years don't count. (As someone who had only a distant concept of romance until later in life, I say it totally counts.)

They receive messages from strangers on social media "almost every day." Many come from young people in African countries, happy to see romance between black men. Some come from parents of young queer children, mostly black, who find relief in seeing what love could look like for them.

"Everything we do on social media is genuine," Nick says. "We want people to know that everything we have is attainable for anyone."

Sofia Berger, left, and Sekiya Dorsett. "We love being lesbians," Sekiya says. "Where I grew up, we didn't have these types of images. So it's very powerful for me." CreditJamal Jordan/The New York Times

If Sekiya still lived in the Bahamas, where she grew up, she would probably be with a man.

Why did you agree to these photos with me?

"We love being lesbians," Sekiya says. "Where I grew up, we didn't have these types of images. So it's very powerful for me."

I quickly noticed all the small ways Sekiya, 33 and Sofia, 38, take care of each other. Sofia fluffed Sekiya's Afro and wiped sweat from her brow. Sekiya grabbed Sofia and kissed her reassuringly as she rearranged the curios on her mantle (for the second time).

As an interior designer, she needed the background to look perfect.

Many external forces have almost torn them apart — immigration issues, near-deportation and multiple health scares. "Sofia stuck by my side," Sekiya said. And Sekiya stayed by hers.

When you love someone, they told me, you learn how to see it through.

Tree, left, and Carlon, with four of their five children at their family business in the Bronx. From left, Camille, 2; Forest, 5; Sky, 3; Angel, 4.CreditJamal Jordan/The New York Times

I'd never met gay parents before. But I had taken a family portrait.

It's clear that Tree and Carlton have big dreams, for their family and their business — Zambo Aroma, a small shop in the North Bronx that sells soaps, candles and beard oil.

Taking photos with children is hard. At first they wouldn't look at me, then they cried. The boys ran away, then hid behind their parents before deciding to team up and attack me: One on my back, one on my leg, before everyone else joined in.

Lesson learned: Children aren't props, and this wouldn't look like a magazine spread.

On one hand, it felt just like every other family portrait. On the other, I felt like I'd captured something impossible.

Paulette Thomas-Martin and Pat Martin live together in Harlem. They are both 66 and have 13 grandchildren between them from the lives they lived before they met. CreditJamal Jordan/The New York Times

As soon as I arrived at Paulette and Pat's apartment, I was asked to open a high curtain.

Pat, sitting in a window-side chair warned, "You keep this up, and she'll have you dusting soon."

Paulette and Pat, both 66, have 13 grandchildren between them — gifts from the lives they lived before they met each other. They are old enough to be my mothers.

I never knew people of that generation who were so openly gay. So much of queerness seems to be tied up in an obsession with youth, and it's hard for me to imagine what came before that.

They live together in Harlem and speak fondly of the neighborhood that existed before familiar black faces started to disappear from the street corners, before single-family brownstones were razed for cold, metal high-rises, before the Apollo Theater was walking distance from a Whole Foods.

We walked slowly down 125th Street, Harlem's main thoroughfare, allowing the pedestrian traffic to bustle around us. A man read Bible verses on a street corner. Pat stopped to say hello. He'd been a fixture in the neighborhood since he was a child.

When I'd first moved to New York, I lived in this same neighborhood. Even then, I couldn't imagine dating someone. I could never imagine walking down 125th Street, holding his hand.

I stopped and posed them for a picture. There, among the smell of incense and the distant sounds of a drum circle, Pat pulled Paulette close. Most people walked around us. A few bumped into me. Some stared.

Neither of them seemed to notice.