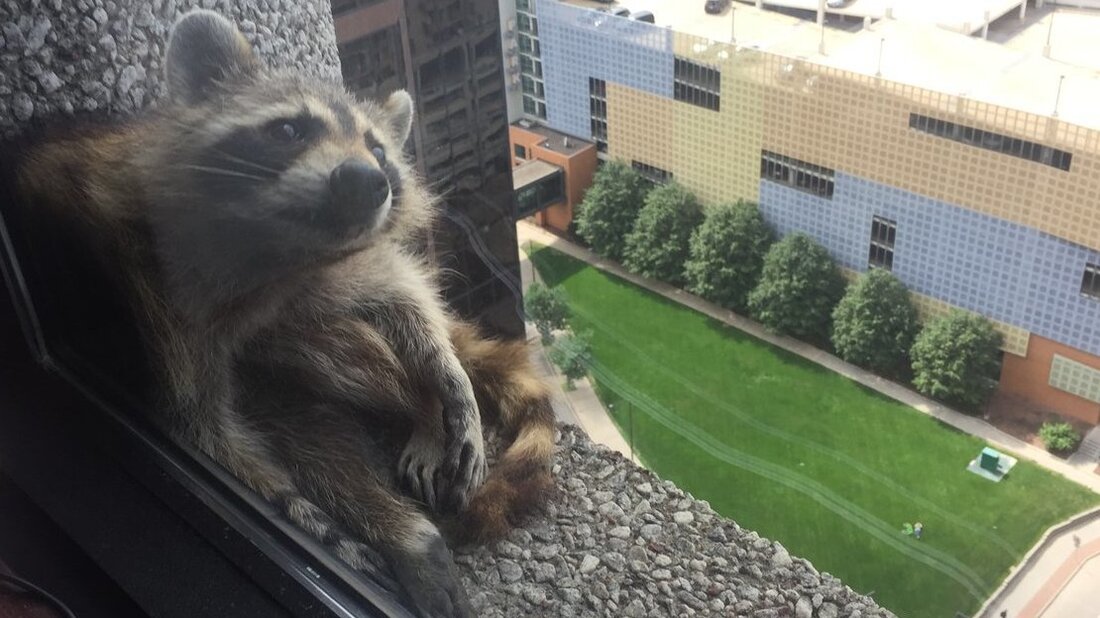 High above the bustling streets of St. Paul, Minn., among monoliths of concrete and glass, a daring climber has defied the odds — and the altitude — to capture a city's heart.

It just happens that this little hero has paws.

A mottled brown raccoon has been climbing since at least Monday, when it was spotted resting in a relatively low-level niche outside the Town Square building downtown, according to Minnesota Public Radio. The station says it wasn't long before the animal had scrambled onto a skyscraper nearby and continued its dangerous ascent.

This poor raccoon apparently got itself stranded on a ledge of the Town Square office building in downtown St. Paul, likely on an errant mission to raid pigeon nests on the skyway over 7th Street. It's been there for two days now, without food or water. @mprnews pic.twitter.com/fVI5pmdCWq

By Tuesday afternoon, the raccoon had climbed more than 20 stories outside the building of UBS bank — and had drawn a following so intensely invested in its journey, local media were even live-streaming the dramatic "RACCOON WATCH."

Naturally the MPR newsroom, which has had a front-row seat to the drama, has mobilized to cover the epic — better known now as the tale of the #mprraccoon. MPR's Tim Nelson notes the hashtag hit the trending list for Twitter users in the Twin Cities.

And boy, have onlookers — both on Twitter and on the street — struggled to cope with the frightening scene. Some grappled with their feelings in art. Even the raccoon itself weighed in with its very understandable regrets, though it remains unclear how the animal tweeted without opposable thumbs — or where, exactly, it's keeping its phone during the climb.

Me: Hey, I need a refill on my anxiety meds.

Doc: I just filled that, what's going on?

Me: There's a raccoon and he's climbing a building and no one can save him and he hasn't eaten in a while and I am very concerned.#MPRraccoon https://t.co/1JsVAotN4T

For folks actually within the UBS building, such as Sheila Donnelly-Coyne, the drama has been rather more immediate — and, well, in some ways less dramatic. The raccoon has been perched for some time outside the 23rd floor offices of her law firm, Paige Donnelly, and she tells NPR that it actually looks pretty relaxed, all things considered.

They've been treated to a closeup view of some stretching, scratching and a fair share of napping.

The office also has seen some firefighters filtering through. Donnelly-Coyne says they are setting up live traps on the roof, together with some cat food to entice the little guy to climb just a few floors more.

She says the firefighters have told her office that anything other measures — such as reaching for the animal with window washing equipment — likely would scare and "endanger the animal." So for now, the high drama has become a waiting game.

Hang on tight, dear Spider-Raccoon. A city's hopes ride on your shoulders.