USA's victory over Japan in the women's gold medal football last night was marred by a slew of racist tweets.

The 2-1 match had barely ended when the terms 'Pearl Harbor' and 'Japs' started trending on the micro blogging site.

Olympics fans tweeted how the U.S. victory had been 'payback for Peal Harbor' and made reference to the Hiroshima and Nagasaki atomic bombs dropped by the U.S. military in WWII. 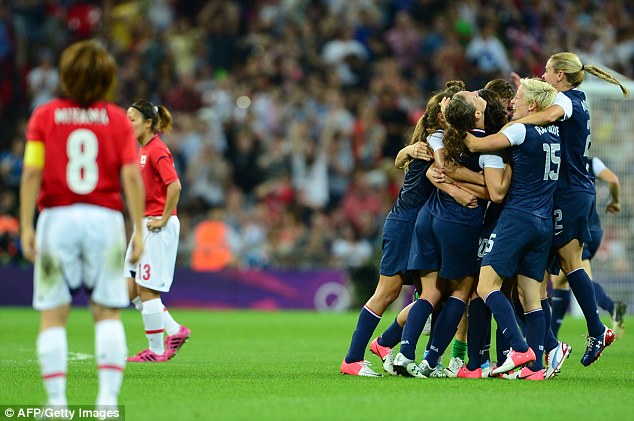 Scoring a foul: Some fans took to Twitter after the match to post racist tweets about the 1941 Pearl Harbour attack which resulted in America's entry into WWII

Insensitive: The tweets rolled in on the day the USA women's football team won gold at the Olympics – and on the anniversary of the Nagasaki bombing

Before the match ended one wrote the game would end 'the same way WWII did. With Hiroshima and Nagasaki burnt to the ground'.

But the anniversary seemed to have little bearing on the Twitter messages. One user @treywimbo wrote: 'This was payback for the USS Arizona!! Take that you Japs!' 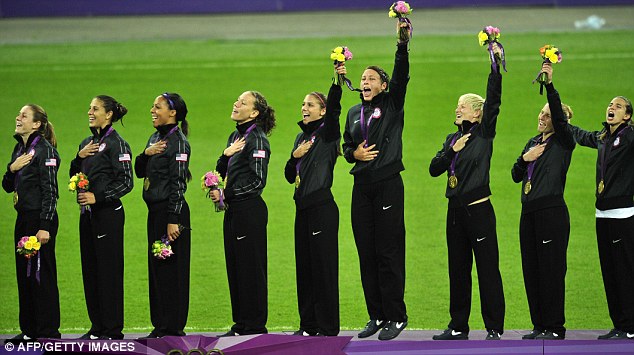 Celebrations: The women's team yell out the U.S. national anthem as they celebrate their gold medal win 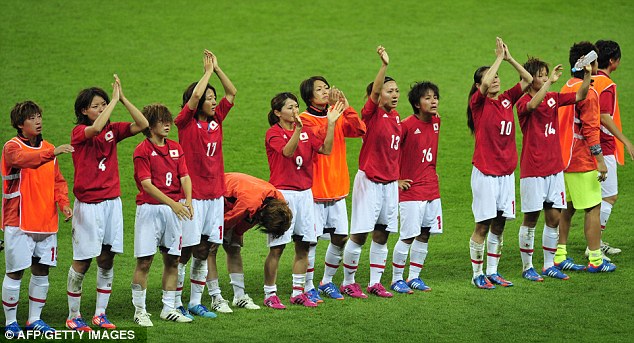 Sporting: Japan's players applaud supporters after being defeated by the U.S. in the final of the women's football at the Olympics

Another, @CocoSully7 wrote: 'Watching this game makes me think of how much I really do hate Asians.'

@emilydunderwood tweeted how winning a
gold medal in the women's football meant the U.S. was 'almost even'
with Japan for the the December 7, 1941 Pearl Harbour attack.

Others hit back at the racist tweets, arguing the women's game had nothing to do with either attack.

While
@oh_deir wrote: 'Just because the US won a gold medal in soccer doesn't
mean you have a free pass to make racist jokes about Pearl Harbor
#growup.'

Hitting back: Some hit back at those posting tweets about Pearl Harbour however

Inevitable: Twitter user @lissybluebell wrote how mentioning Pearl Harbour when the U.S. beat Japan at anything was sadly standard procedure

Another user @lissybluebell wrote: '3
things in life are certain: death, taxes & that whenever the US
beats Japan at anything SOMEone will call it 'payback for Pearl
Harbor'.'

The U.S. team's win made up for the heartache of last year's World Cup final when they lost to Japan on penalties.

The women's coach Pia Sundhage even declared her side could be 'unstoppable' at the next World Cup in 2015.

American Carli Lloyd scored both goals last night in front of a record 80,203-strong crowd at Wembley Arena in London.

Lloyd
said: 'Wembley was amazing. 'To play in all these historic stadia is
amazing. 80,000 people for a women's final is unbelievable – it says a
lot and we feel very lucky.'

The attack on the naval base at the Hawaiian port of Peal Harbour took the Americans completely by surprise.

On the morning of December 7, 1941, the base was attacked by Japanese fighters, bombers and torpedo planes.

Four of the U.S. Navy's battleships were sunk while the other four were badly damaged. The attack also claimed other ships and killed 2,402 Americans and wounded more than 1,000 others.

Sixty-five Japanese servicemen were either killed or wounded in the attack. It had been a terrible shock for the American government and its people and directly led to the U.S. entering World War II.

On December 8 America declared war on Japan. Three days later it reciprocated a declaration of war on Germany and Italy.

In the final stages of World War II the U.S. dropped two atomic bombs on the Japanese cities of Hiroshima and Nagasaki.

The war with Germany had ended on May 8, 1945, but the Pacific war rumbled on until the Americans called for Japan to surrender in the July or face 'prompt and utter destruction'.

The Japanese government ignored the warning and on August 6, American soldiers dropped 'Little Boy' on Hiroshima followed by 'Fat Man' over Nagasaki on August 9.

Most people died on the day of the explosion but others died over the next few months from radiation sickness and burns. The bombs served their purpose and on August 15 Japan surrendered, officially ending World War II. 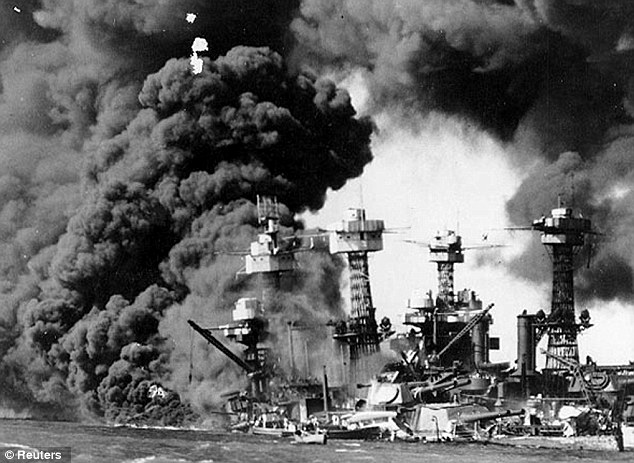 Surprise attack: The USS West Virginia battleship burns and sinks after the Japanese launch a surprise attack on the Hawaiian port of Pearl Harbor on December 7, 1941, killing nearly 2,500 Americans 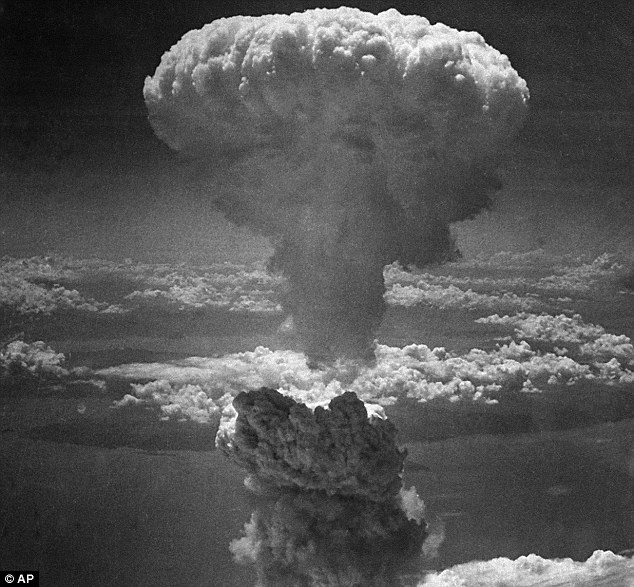 Explosion: A giant mushroom cloud rises into the air after the U.S. dropped its second atomic bomb on Japanese port Nagasaki on August 9, 1945, killing 70,000 people