Ranking the Most Beloved TV Shows that Got Canceled

The first three seasons of the TV show Arrested Development aired on Fox from 2003 to 2006. Hardly anybody watched it.

In its final season, Arrested Development ranked 123rd in viewership among 156 primetime TV shows. Four times as many people watched Charlie Sheen's Two and A Half Men, and three times as many watched Donald Trump's The Apprentice. "Arrested Development is watched by critics," The New York Times TV critic wrote in 2004, "but it deserves a bigger, perhaps better audience."

Arrested Development is now considered by many to be a masterpiece. Time magazine listed it among the 100 greatest shows of all time, and IGN named it the funniest show ever made—just above the Simpsons and Seinfeld. The show received so much post-mortem love that it was brought back by Netflix for a fourth season in 2013—seven years after its original cancellation. A fifth season is set to arrive in 2017.

Until its resurrection, Arrested Development was destined to be part of the grand tradition of short-lived cult TV shows. We now live in the golden age of niche television—with Hulu and Netflix saving TV shows with devoted but small audiences. But this is a new phenomenon. In the recent past, shows without broad appeal were quickly cancelled.

What are the other Arrested Developments—the cancelled shows that had devoted but niche fan bases during their brief runs?

To answer that question, we collected data on the number of seasons, episodes, and user reviews of thousands of television shows listed on the Internet Movie Database (IMDB). (The site's name is a bit of a misnomer as it also contains tons of television data.)

Using these data, we identified about 500 shows that met the following criteria:

The following table shows the top twenty short-lived shows with the most user ratings. Arrested Development would top the list with over 213,000 ratings had it not returned for a fourth season. 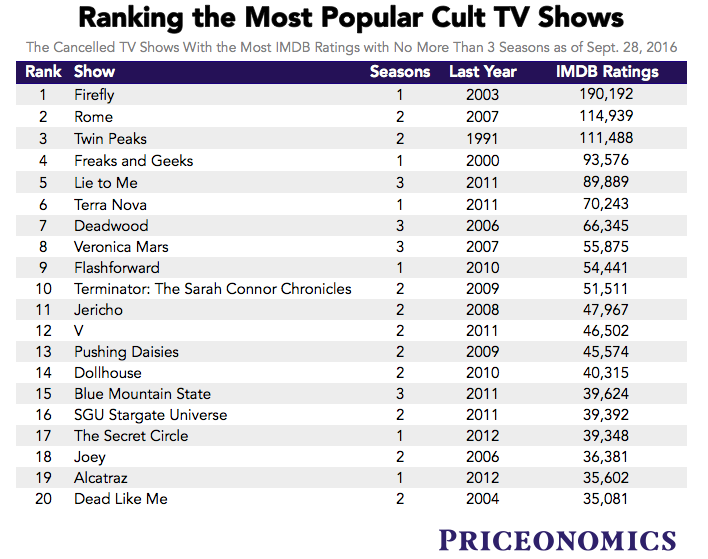 By our measure, the space western Firefly is the quintessential cult classic. Though only fourteen episodes aired before its cancellation in 2003, Firefly has received over 190,000 ratings on IMDB. This makes it the 37th most reviewed show of all time, just behind The Sopranos and The Wire.

Firefly, created by the future Avengers director Joss Whedon, inspired a seriously loyal following. Devotees refer to themselves as "browncoats" after the show's good guy rebels, and more than a decade after the show's cancellation, Firefly fan sites, Wikia pages, and Reddits remain aflame. Astronaut Steven Swanson even brought his Firefly DVDs to the international space station.

This frenzied devotion to a short-lived show is unprecedented even compared to other cult classics. This scatter plot shows the number of episodes versus the number of ratings for the more than 500 shows with three seasons or fewer. 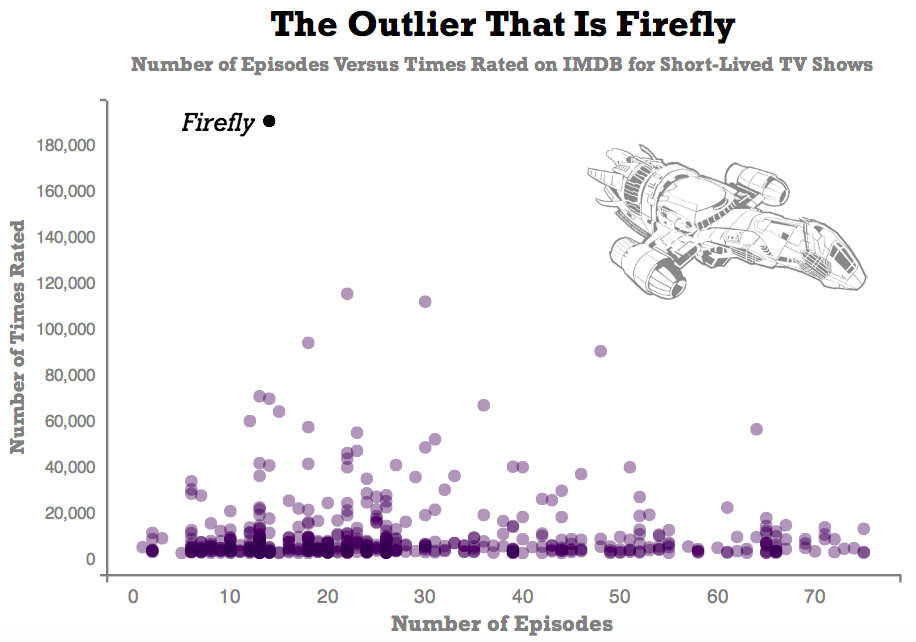 Of the twenty shows in our list of cult classics, all but one last aired in the 21st Century. This is likely due to short-term memories and IMDB raters skewing young.

The only pre-2000 show to conquer our measure's recency bias is David Lynch's surreal whodunit Twin Peaks. The show only lasted two seasons from 1989 to 1990, but it has since become a cult phenomenon. Many critics believe that the show paved the way for today's auteurist, prestige television. Matt Soller Seitz writes for New York magazine, "The arty, boundary-breaking drama as we now know it wouldn't exist without Twin Peaks…"

This analysis suggests that cult classics tend to be science-fiction or mysteries. Eleven of these shows belong to one or both of these genres.

The only comedy in the top ten is Freaks and Geeks. Canceled after only 18 episodes, Freaks and Geeks spawned future stars like  Seth Rogen (Knocked Up), James Franco (Spider-Man), Jason Segel (The Muppets), Lindsay Cardellini (ER), Rashida Jones (Parks and Recreation) and Martin Starr (Silicon Valley), among others. The show is number one on TV Guide's list of "Best Shows That Got Cut Short."

Number two on TV Guide's "Got Cut Short" rankings is My So-Called Life—the most notable absence from our list. My So-Called Life lasted for just one season of 19 episodes, but is now considered a TV classic that depicted teenage life with rare authenticity.

Though My So-Called Life does not make our list above, which is based on total number of ratings, it does make the top ten when we look at the quality of ratings received. The following chart displays the twenty shows with the highest average IMDB rating among canceled shows. We only include shows with over 10,000 reviews. 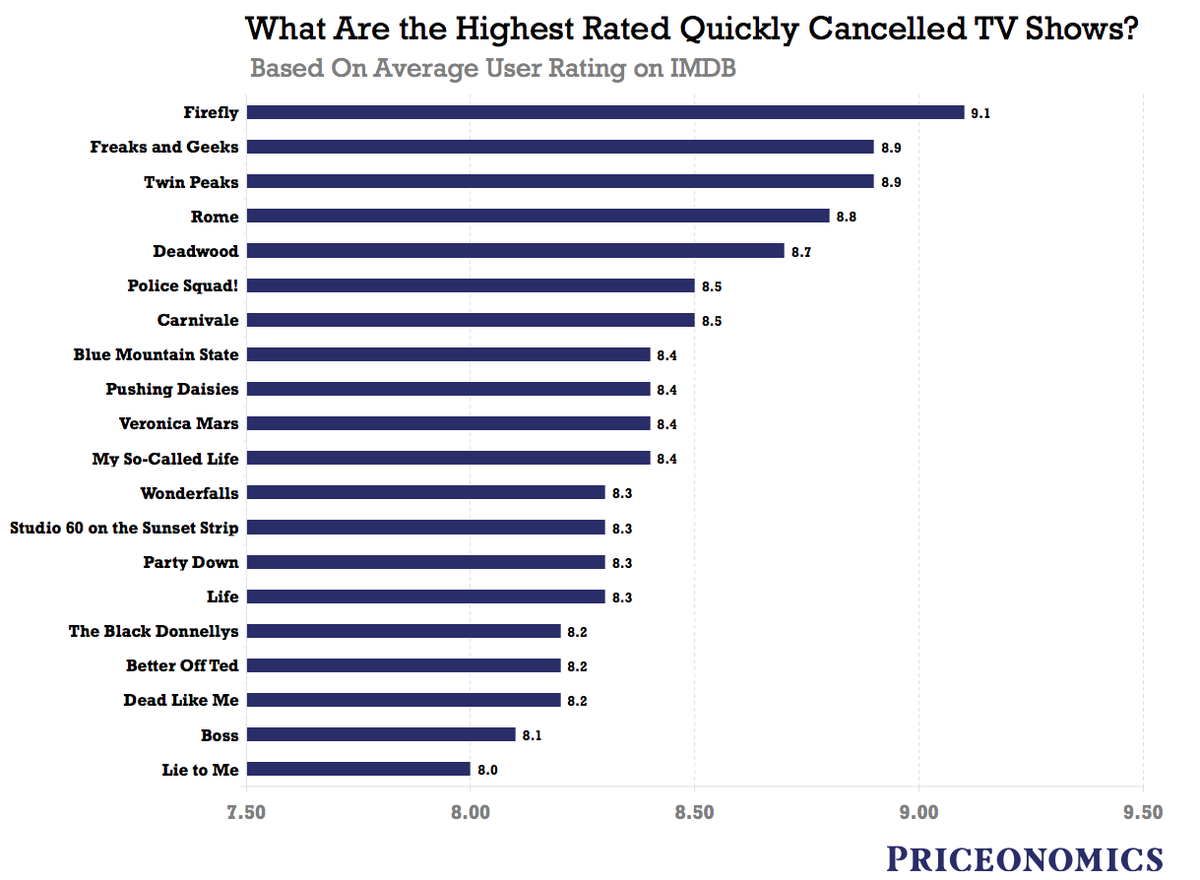 If they were on today, shows like Deadwood, Veronica Mars, and Pushing Daisies might have been saved from their early obsolescence by Netflix. But unfortunately we will never see their protagonists' full stories.

Maybe that is what fuels the long afterlives of short lived but much loved shows: the fact that the fans can fill in so much of the show's fictional world—and debate and dream up what might have been.

Our next article explores the rise and fall of 1-900 numbers. To get notified when we post it  →  join our email list.

Announcement: The Priceonomics Content Marketing Conference is on November 1 in San Francisco. Get your early bird ticket now.