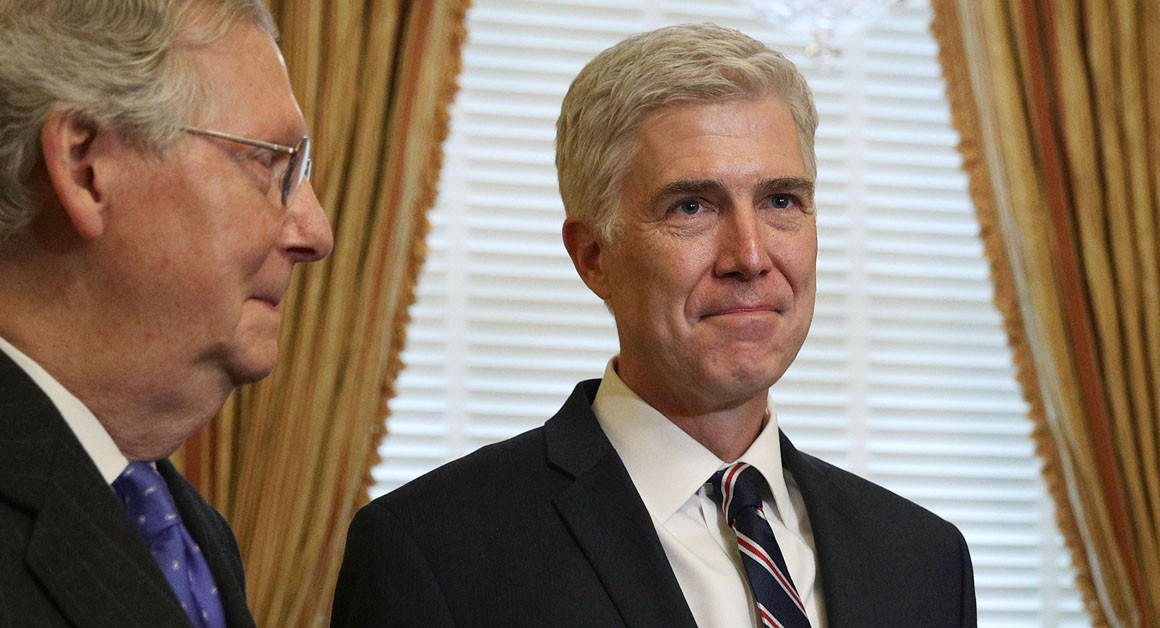 But the Senate majority leader had an equally pressing message: Republicans should have no compunction about pulling the trigger on the "nuclear option" — with Democrats resisting a high court nominee as well-pedigreed as Gorsuch.

"Feel no guilt," McConnell said, according to attendees.

McConnell's attempt to buck up his GOP ranks, relayed by three sources in attendance, underscores the high stakes of the Gorsuch battle as the Senate barrels toward a likely nuclear showdown next week: His confirmation is, to put it mildly, a can't-lose for Republicans.

That was true after Senate Republicans waged a yearlong blockade of Merrick Garland that positioned the GOP to pick someone else now. But the spectacular collapse of the Obamacare repeal effort last week makes Gorsuch all the more urgent for President Donald Trump and reeling Hill Republicans.

McConnell is so confident that Republicans will win the Gorsuch fight that the Kentucky Republican predicted he'll be confirmed by a week from Friday.

"It will be the kind of victory that I think a lot of our people who support us want to see," Sen. John Thune (R-S.D.) said in an interview. "They want to see us get things done. We'll get that done, so hopefully we'll get an accomplishment."

Aside from Gorsuch, there's no obvious candidate on the horizon for the GOP's first big congressional achievement of the Trump presidency.

A rewrite of the tax code is months away under the most optimistic timeline. Averting a government shutdown next month would be a meager accomplishment, even by Congress' low standards. And while some Republicans don't want to give up on health care reform, there's nothing to indicate a magical compromise will materialize.

More Senate Democrats are putting the onus on the GOP to install Gorsuch on the Supreme Court without their help. Several swing Democratic votes this week came out in opposition to the federal judge from Colorado, even after he got through his confirmation hearings last week without any big blunders.

Sen. Debbie Stabenow (D-Mich.) announced Tuesday that she will not only vote against confirming Gorsuch, but will also filibuster him. That made her the fifth of 10 Democrats from states that Donald Trump won last November to oppose the president's first Supreme Court nominee.

Though Gorsuch's path to 60 votes keeps narrowing, at least one Democratic senator who plans to oppose the judge — Sen. Ben Cardin of Maryland — is still evaluating how he will come down on invoking cloture, which will determine whether Gorsuch gets an up-or-down confirmation vote on the Senate floor.

While whip counts continue to fluctuate, Republicans are trying to deflect pressure back on Democrats.

"There are a lot of people that voted for President Trump because of the Supreme Court. So I think it's very important for that and other reasons," Senate Majority Whip John Cornyn (R-Texas) said. "This is going to be a real test of the Senate Democrats, whether there's any nominee they can support for this president."

Several Republicans stressed that the failure of Obamacare repeal and the necessity of confirming Gorsuch are not intertwined. 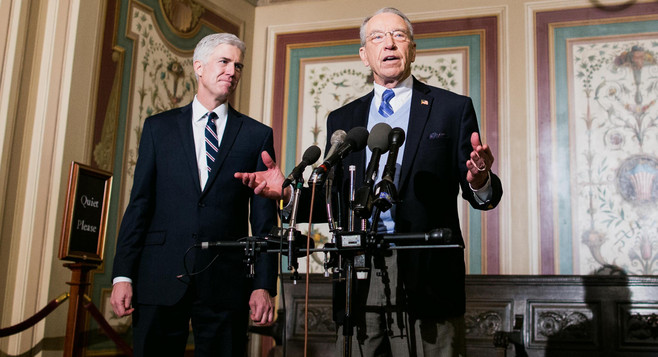 "Gorsuch would be a win anyway, and who knows that we would have a health bill to the president by this Friday if the House had passed it?" Senate Judiciary Committee Chairman Chuck Grassley (R-Iowa) said. "So I think you've got to see them separately."

GOP leaders can generally lose two Republicans on a simple majority vote, but their margin may be even narrower on the nuclear option with the absence of Sen. Johnny Isakson (R-Ga.), who is recovering from back surgery. An Isakson spokeswoman said the senator is in Georgia this week and is "working to get cleared by his doctor to return to D.C. as soon as possible."

If Republican leaders feel bullish about the prospects of getting Gorsuch confirmed — no matter what it takes — some rank-and-file GOP senators aren't eager to declare they're prepared to deploy the nuclear option.

"I would address that issue when it arises," said Sen. John McCain (R-Ariz.), a veteran institutionalist who was a member of the "Gang of 14" that staved off the nuclear option over judicial nominations in 2005. He and Republican Sens. Susan Collins of Maine and Lindsey Graham of South Carolina are the only senators remaining from that effort.

Other Republicans, though, are itching for battle.

"I believe we will do whatever is necessary to ensure that Judge Gorsuch is confirmed," Sen. Ted Cruz (R-Texas) said.

The nominee is set to meet with a half-dozen senators this week. And several Republican members on the Senate Judiciary Committee — including chairman Grassley, Graham, Cruz and Mike Lee of Utah — are holding a news conference Wednesday at the steps of the Supreme Court, where they'll be flanked by Gorsuch's former clerks at the 10th U.S. Circuit Court of Appeals.

House Judiciary Committee members will follow with their own Supreme Court-themed event on Thursday. And former Sen. Kelly Ayotte (R-N.H.), who has served as the judge's "sherpa" during the confirmation fight, along with Gorsuch clerks will hold a series of media calls designed to target Democratic senators from the most conservative states.

"People are expecting us to get the pick on the court. It's a big deal," said Sen. Jeff Flake (R-Ariz.), another member of the Judiciary Committee. "It's a big deal. It's the way the president leaves his legacy."