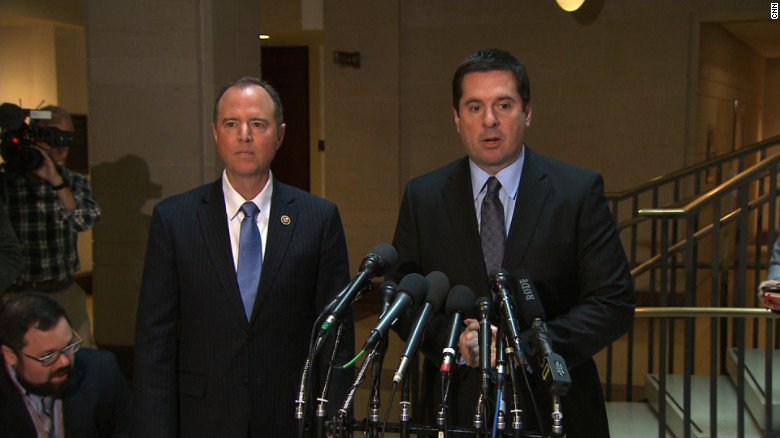 (CNN)Top Republicans in Congress expressed their dissatisfaction Wednesday about getting answers from the FBI, as lawmakers trying to investigate Russia's meddling in the US election say they've continued to see no evidence of President Donald Trump's claim that he was wiretapped by his predecessor.

The FBI's decision to brief the Senate Judiciary Committee comes after the committee's Chairman, Sen. Chuck Grassley, threatened to not schedule a vote for Rod Rosenstein to be deputy attorney general unless his panel got the FBI briefing he and the committee's top Democrat, Sen. Dianne Feinstein of California, requested weeks ago.

Grassley — a stalwart Republican with a powerful post — expressed his exasperation the FBI hours before a private meeting at the Capitol with Comey. He called the scheduled meeting a "positive step," but also added: "I don't want to say that's enough at this point."

Grassley said he was frustrated that officials haven't been as forthcoming as lawmakers would like, and said his committee hasn't been given the respect it deserves for its oversight of the executive branch.

He wasn't the only Republican venting his displeasure: Sen. Lindsay Graham, who sits on a subcommittee that's seeking FBI answers, said earlier that he would subpoena the agency for information if it wasn't provided to him and fellow subcommittee member Sen. Sheldon Whitehouse.

"We wrote a letter – Sen. Whitehouse and myself – wanting to know if there's evidence of a warrant issued by the Trump campaign," the South Carolina Republican told CNN's Chris Cuomo on "New Day. "He hasn't answered that letter or confirmed if there's a real investigation of the Trump campaign."

"He needs to answer the letter and give the nation some information about what's going on here," Graham said.

It was also announced Wednesday that Comey will testify at the House Intelligence Committee on March 20 hearing and there will be a second hearing in the committee March 28, the committee's chairman said.

In a Fox interview with Tucker Carlson Wednesday, the President defended his decision to tweet about wiretapping before producing evidence by hinting — again without evidence — that more information will emerge in the weeks to come, presumably proving his point.

"Wiretap covers a lot of different things," Trump said. "I think you're going to find some very interesting items coming to the forefront over the next two weeks."

House Intelligence Committee chairman Rep. Devin Nunes said he does not believe Trump's claim that Obama wiretapped him, but said it's possible Trump communications may have been gathered in "incidental" intelligence collection.

"We don't have any evidence that that took place and, in fact, I don't believe — just in the last week of time, the people we've talked to — I don't think there was an actual tap of Trump Tower," Nunes said at a news conference in reference to the claim originally made by Trump several weeks ago.

Nunes and Rep. Adam Schiff, the ranking Democrat on the House Intelligence Committee, said they want to see any evidence of wiretapping by their March 20 hearing or they may also issue a subpoena for the records.

Asked if he had seen any evidence that Trump aides spoke with Russian officials other than Russian ambassador to the US Sergey Kislyak, Nunes said, "Not that I'm aware of."

But Schiff added: "I wouldn't answer that question as categorically as my colleague. We're not privileged to talk about the contents of the investigation but, you know, I think we need to be very precise when we talk about this. And I just don't think that we can answer it categorically in this forum."

Nunes and Schiff also sent a letter to the FBI, CIA and National Security Agency demanding information on the leaks regarding Russia's contact with Trump advisers by Friday.

The two leaders of the House investigation said their work has been stalled so far by trouble accessing computers used by the director of national intelligence — Schiff said he has been taking handwritten notes when he views evidence.

The two have not yet interviewed former national security adviser Gen. Michael Flynn and declined to say whether he would appear at a public hearing. Schiff added that he is very concerned about Trump adviser Roger Stone's admission that he communicated with "Guccifer 2.0" — who was later determined by intelligence agencies to be a Russian hacker or group of hackers.

Stone has described his contact with Guccifer as limited to a "brief exchange with him on Twitter" and any suggestion otherwise, he told CNN, is "a fabrication."

The White House has vacillated on Trump's claims in the last two days. Press secretary Sean Spicer said Monday that Trump did not mean literally that Obama personally wiretapped him. But on Tuesday, Spicer said Trump was "extremely confident" he would be vindicated by the evidence.

"I think there's significant reporting about surveillance techniques that existed throughout the 2016 election," Spicer said, without providing any examples.

"He feels very confident that what will ultimately come of this will vindicate him," Spicer said.

Attorney General Jeff Sessions said Wednesday he never gave Trump any reason to believe the GOP candidate had been wiretapped by the Obama administration during the campaign.

Asked by a reporter at an event on crime in Richmond, Virginia if he ever briefed Trump on "investigations related to the campaign, or did you ever give him any reason to believe that he was wiretapped by the previous administration," Sessions replied: "Look, the answer is no."

Sessions went on to reiterate that he has recused himself from any investigations involving the Trump campaign and transition, and said he was not speaking with the President or the people who are investigating the case. He added that he was "unable to comment on any of these details."

Senate Intelligence Committee Chairman Richard Burr said Monday that he has asked the "appropriate people" for information about Trump's wiretap claims, and said their answers have been "sufficient."

But Senate Democrats on the Intelligence Committee said they have not seen any evidence yet.

"I've heard nothing. But I'm strongly of the opinion there was no wiretapping," said Feinstein, a veteran member of the panel.

Sen. Mark Warner, who also sits on the Senate Intelligence Committee, also said he was not satisfied with the response to requests for information from the administration, saying: "I'm not sure why this is taking any time."

Burr said Wednesday he did not have an update on when his committee would have their first public hearing on Russia.