You're never going to retire. At least not in the way we have come to perceive retirement.

For a while there, we had a pattern. You went to school, you worked and then you retired for a handful of years before your eternal demise. Well, that pattern is broken. We live longer and fewer of us have company pensions to see us through those final years.

Jonathan Chevreau, author of the book Victory Lap Retirement, says people have to adjust their perceptions to meet the new reality.

And Statistics Canada is already backing that up. The number of people in the workforce aged 55 and older is surging, with 170,000 more people in that age bracket today than this time last year. Among the 10.6 million Canadians aged 55 and up, a record 36 per cent are working or seeking work.

Whatever you want to call it, more Canadians than ever before are doing it.

The Broadbent Institute crunched those same numbers and found not only are we living longer, we are saving less. Among those aged 55 to 64 without access to a company pension, about half have less than half of what they'd need to pay their bills. A staggering 32 per cent have less than $1,000 in retirement savings.

"We're looking at a situation in our country — 10 years down the line, 15 years down the line — where millions of Canadians have very little disposable income and that's not good for the economy," said Rick Smith, executive director of the Broadbent Institute.

Plan for a 100-year horizon

"Every millennial should be planning for a 100-year horizon," he told CBC News. "These millennials are going to have an 80-year time investment time horizon." 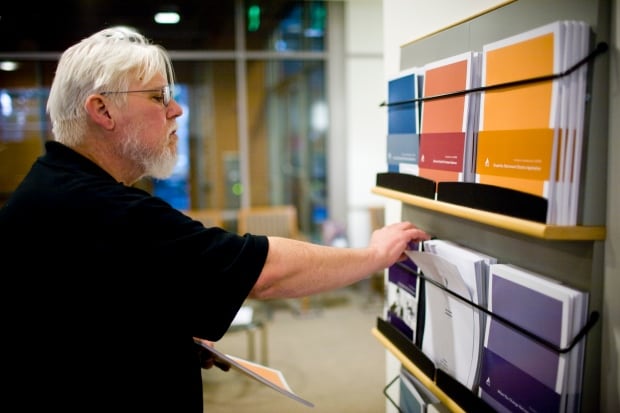 The average U.S. worker holds 10 different jobs before the age of 40, which is changing the nature of retirement. (Max Whittaker/Reuters)

Benjamin Tal, deputy chief economist at CIBC World Markets, says these changes have seeped into Canadian economic reality over years. "The issue is not people that are retiring now, or in the very near future. On average they are fine," says Tal.

The good news, Tal says, is semi-retirement is much easier than it used to be and technology makes part-time work or work from home easier than it's ever been.

"That should impact the way we all think about retirement," he says. "Disengagement from the labour market will not be an "event" marked in the calendar, it will be a much more gradual process than in the past."

Sure, we're living longer, but we're working differently now, too. A recent study from Workopolis found job hopping is the new normal. More than half of Canadians stay in a job for less than two years. The U.S. Bureau of Labour Statistics says the average worker holds 10 different jobs before the age of 40, a trend that is widely expected to grow.

So semi-retirement is a choice for many of today's retirees, Tal says, but he warns that is also changing.

"It won't be an option for many younger Canadians," he says. "Many of them will be forced into it in order to reach a more reasonable replacement ratio," he says.