After their appearance at Coachella this year, Philadelphia power-pop group Sheer Mag performed in a stuffy tattoo parlor with foggy windows in Santa Rosa, California. The sleepy city is about an hour north of Oakland and San Francisco, and is most famous for being the hometown of Peanuts creator Charles Schulz. The group ate pizza on the sidewalk, loaned some gear to local post-punk outfit Creative Adult, and at the end of a spirited set for a churning crowd, wore satisfactorily exhausted expressions.

Shows like that are increasingly common in Santa Rosa, and it has a lot to do with the prohibitive cost-of-living in nearby San Francisco. "I had every intention of moving down to the city," said Ian O'Connor, 23, who organized the gig. "But when the time came, it was too expensive." Instead, in the last three years, he has booked dozens of all-ages gigs in Santa Rosa, mostly at unofficial venues: detached garages, living rooms, lobbies of sympathetic businesses. The scene thrives on the participation of people like him, area natives in their early 20s who, not so many years ago, would've likely moved an hour south to Oakland or San Francisco.

O'Connor stressed that though Santa Rosa is relatively affordable, the local punk scene faces challenges that cities with established reputations lack. "If you're in the big city, you can sort of just jump into the stream," he explained. "If you're in a small town, you have to get down on your hands and knees and dig a ditch so that the water can run."

One hallmark of punk's inception in the Bay Area and throughout the Pacific north-west was the notion of cities as places of possibility, so hollowed out by eroding tax bases and selective civic neglect that they seemed "deserted and forgotten", as music journalist Jon Savage wrote of his 1978 trip to report on San Francisco punk bands such as Crime and the Dead Kennedys. "It was there to be remapped."

But with the same cities stricken by intensifying affordability crises - premiums on space that make somewhere to live, let alone rehearse and perform, available to a dwindling few - they don't beckon young punks like they used to. And though reports of music scenes' deaths tend to overstate, news of shuttering venues (see eulogies for The Smell, The Know, and LoBot) deters some of the intrepid transplants needed for invigoration. Dissipating metropolitan allure, however, helps account for the strength of scenes in outlying towns.

In Santa Rosa, Acrylics are at the center of things. The five-piece, which recently announced a forthcoming record on leading west coast punk label Iron Lung, boasts a lashing and cantankerous sound, with staccato turnarounds and nervy guitar leads. They share members with a constellation of groups, including tightly wound punk outfit Fussy; sturdy hardcore units Rut and Service; and the dynamic noise-rock band OVVN.

"The people who before just came to the shows are now setting them up," said Ben Wright, 24, who recorded recent releases by most of the aforementioned groups and plays guitar in Acrylics. "It's been pretty astounding in terms of genuine participation... We could move and struggle somewhere else, but I think there's a lot of people who'd like to see Santa Rosa become something like Olympia." 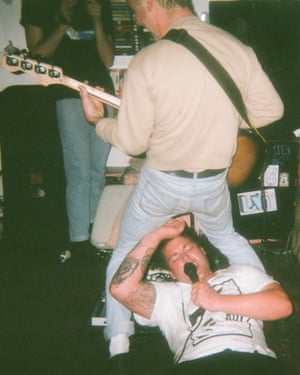 A band with real fibre: Acrylics at the Nuthole in Seattle. Photograph: J Party

Scott Young, 28, grew up in the Pacific north-west and moved to Olympia, Washington, in 2006. Until recently, he played bass in Gag, a winkingly scabrous hardcore band that's lately influenced the genre significantly. Corey Rose Evans, 23, moved to Olympia from the Bay Area in 2010 to attend Evergreen State College and eventually joined both Vexx, a raucous foursome composed of inventive, tactile instrumentalists and a mightily expressive singer; and G.L.O.S.S. ("Girls Living Outside Society's Shit"), a blistering and bold hardcore outfit that foregrounds transgender issues and skewers reformist politics. The scene is decidedly autonomous, centered around small labels and self-organized gigs.

Young and Evans separately explained that despite Olympia's outsized impact on independent music - genesis of riot grrrl, outpost of indie-pop, headquarters of K Records and Kill Rock Stars - there's still a strong sense that every participant in the punk scene is integral, not unlike the less developed community in Santa Rosa. The scene is decidedly autonomous, represented by small labels and unsanctioned venues. Young lamented that ever since Ben Trogdon, who publishes the underground broadsheet Nuts, moved to New York a few years ago, "No newsletter or printed material has really filled the void." Still, he reckoned, "Olympia does feel like it has the sense of freedom or possibility that used to exist more so in the city."

In a widely publicized Instagram post explaining the band's decision not to work with Epitaph Records, G.L.O.S.S. vocalist Sadie Switchblade ended on a similar note, one that resounds throughout small-town punk scenes: "What I'm trying to say is that we don't have to jump into their world, we can create a new one."

What I'm trying to say is that we don't have to jump into their world, we can create a new one

Evans, who said she never paid more than about $100 in rent, put things more starkly: "People in Olympia don't think moving to a bigger city would be daunting - just dumb. Why pay five times the rent?"

Throughout the 2000s, Keith Testerman, 35, helped define Portland punk as a member of the bands Warcry and Hellshock. Five years ago, he cofounded the venue and rehearsal complex Black Water. A developer paid them to leave the first location, he said, so they moved across town. "In the past couple years, about a half dozen places that had punk shows closed down," Testerman said. "None of them will be able to reopen as a shadow of what they once were."

According to Samantha Gladu - bassist in the feminist, wrestling-themed hardcore band Macho Boys and chief advisor to state senator Chip Shields - recent revelations about what a state investigation found to be cripplingly over-burdensome nightclub regulations have done little to calm the Portland punk scene's nerves: "Rising rents and recent reporting on the city government's apparent selective regulation for venues leave punks with the impression that not only can they not afford Portland, they aren't part of some officials' vision for Portland."

Though the average rent is higher in Seattle than Portland, Jensen Ward, 38, had a rosier diagnosis for the city's punk scene. The proprietor of Iron Lung Records and drummer in a long-running hardcore band of the same name noted that punks often shuttle between Seattle and Olympia; some of them live in houses that host shows in Seattle while playing in bands associated with Olympia. Indeed, a printed monthly show calendar listing underground punk gigs includes Seattle, Olympia, and Tacoma, another Washington town of repute in the scene (not least because of the lean post-punk act Criminal Code).

B Rousse, 38, who drums in Oakland hardcore groups Replica and No Statik thinks the smaller town gigs are more appealing now. "Anyone in my world who's booking a tour for a punk band goes, 'Play Santa Rosa. Play Olympia.' About San Francisco, they go, 'Eh, I don't know.'"

Of course, Connor Alfaro of Acrylics, OVVN, and Fussy pointed out that the urge for young people to move to the city has a lot, if not more, to do with the urge to flee their hometowns. "I left Santa Rosa and moved to Oakland for a couple of years and I had a great time, but I came home," he said. "It's not considered a cool city, but people are starting to recognize what we're doing as meaningful."