On Tuesday, Russia announced that starting in 2020, it will no longer allow NASA astronauts on the International Space Station, in retaliation for sanctions levied by the US because of  Russia's invasion of Crimea.

How can Russia bar American astronauts from a station that both countries own? Simple. Right now, NASA relies on Russian rockets to get its astronauts to and from space, paying them $70.7 million for each one-way ticket.

The surprising announcement won't affect the two US astronauts and three Russian cosmonauts currently aboard the International Space Station, orbiting about 260 miles above Earth's surface, or the future missions there planned over the next few years.

But the most recent plans were for the station to operate at least until 2024. Now, with Russia angered by the sanctions — especially those blocking high-tech exports that might help the Russian military — that no longer seems to be possible.

If these tensions don't resolve by 2020, things could really get messy in space. Private American space companies are hoping to have their own transport systems in place by then — so NASA could theoretically access the station on its own — but Russia is claiming that its space agency, Roscosmos, would try to operate its portion of the station without NASA involvement.

"The Russian segment can exist independently from the American one. The US one cannot," Russian deputy prime minister Dmitry Rogozin said during the announcement.

That's probably not true: the majority of the station's power, among other capabilities, comes from solar panels on the American segment. Without both countries' involvement, it seems unlikely that the station — the only occupied outpost our species has in space — can survive. And either way, it's clear that the two countries' space relationship, once a triumph of the post-Cold War era, is quickly going down the pipes.

How the US and Russia became strange space bedfellows 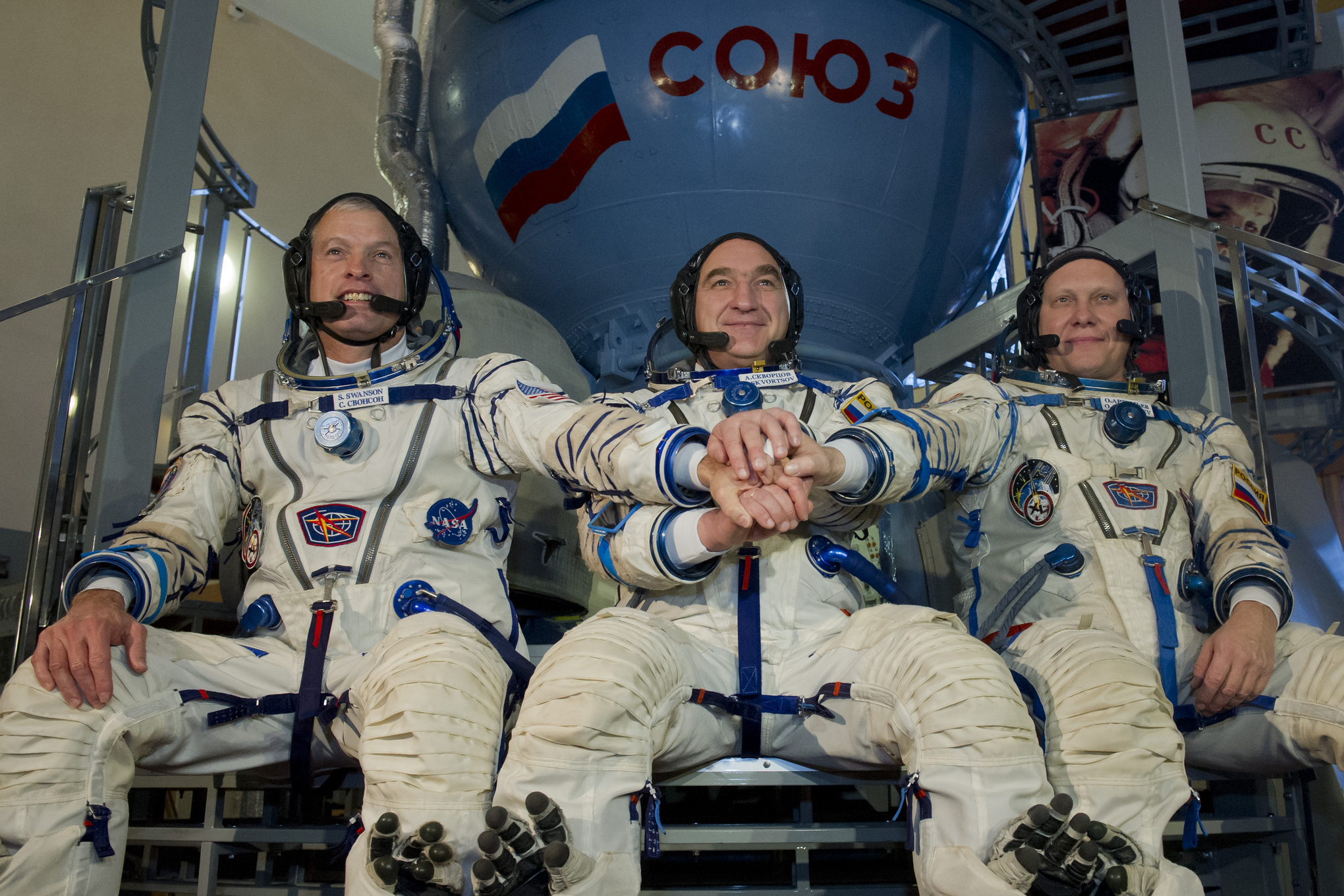 Back in 2004, President Bush announced that NASA's aging space shuttle program would be retired in 2010 and — eventually — replaced by a plan to return to the moon. At the time, NASA realized there would be a four-year gap between the space-shuttle retirement and when the new manned space transport system would be in place.

But at that point, it didn't seem like a big problem for NASA to ask Russia to transport US astronauts to and from the space station in the interim. Relations between the two countries were friendly — Bush was telling reporters that he'd looked into Putin's eyes and "got a sense of his soul." What's more, NASA had relied on Russian transport for 29 months after the Columbia disaster in 2003, when the shuttle program was put on hold.

At the time, it didn't seem like a big problem to ask Russia to transport NASA astronauts

Development of NASA's replacement vessels, however, has taken much longer than anticipated — the agency won't have a replacement for the shuttle until 2017. There are a few reasons for that. Bush's moon program was cancelled by Obama in 2010 and replaced with a plan for private companies to shuttle astronauts. Meanwhile, NASA's budget requests to pay for the new program were repeatedly underfunded by Congress.

"It's put us in a vulnerable position," says John Logsdon, former director of the Space Policy Institute.

This isn't even the only way that the US spaceflight program is dependent on Russia. The Atlas V rocket — built by a joint Lockheed Martin-Boeing venture and used to launch American military satellites and civilian payloads — runs on a Russian-built engine.

When the Atlas V was being designed in the 1990s, Lockheed Martin got a waiver from the usual Defense Department requirement that critical components be manufactured in the US, partly because the Russian engines were better and less expensive than American options, and partly because of political motivations.

"There was a fear that if we didn't find some way of keeping Russian rocket scientists employed, they would go off and work for Iran or North Korea," says James Lewis, a national security and space analyst.

But this hasn't exactly worked out as planned either. In yesterday's announcement, Rogozin also said that all deliveries of the engines for use in launching American military satellites would be stopped. Lockheed Martin and Boeing currently have a two-year supply of them stockpiled, but if the situation doesn't change by 2016, this could be a problem.

The Space Station brings the US and Russia together 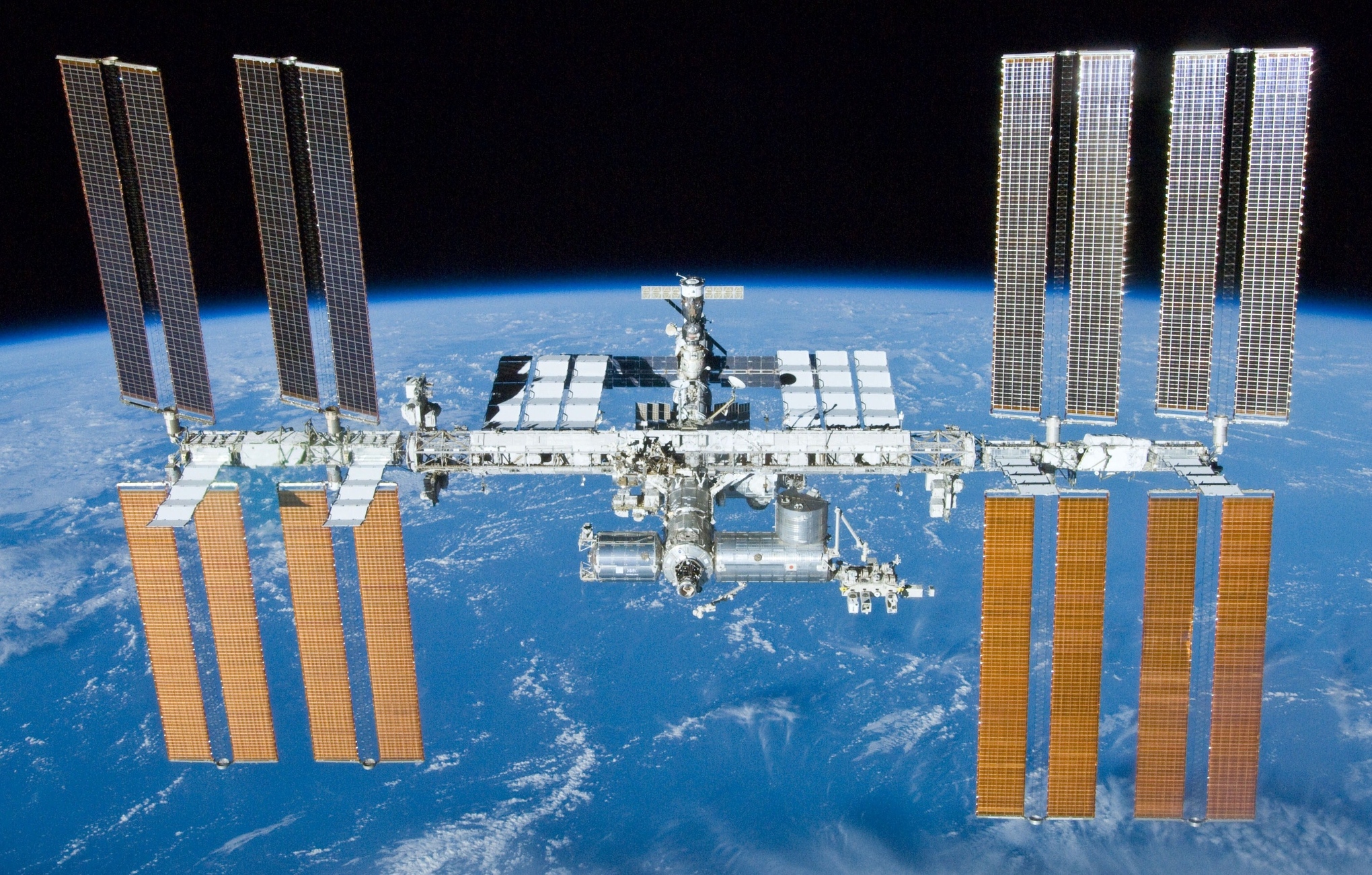 When construction of the International Space Station was begun in 1998, it was seen as an embodiment of the new age of cooperative space exploration — a permanent scientific alliance between a number of countries, but especially longtime rivals US and Russia. The two countries launched separate segments of the station that were assembled in orbit.

Obviously, the tenor of Russian-American relations has changed, but in space, the two countries are still codependent. NASA astronauts travel to and from the station — used mostly for scientific experiments on long-term human spaceflight — on Russian Soyuz rockets, launched from the Baikonur Cosmodrome, in Kazakhstan, the cradle of Soviet space exploration since the 1957 launch of Sputnik.

The next launch is scheduled for May 28, when a rocket carrying American, Russian, and German astronauts will take off to replace the current crew. The astronauts will live together in extremely close quarters for about six months, and if anything goes wrong, they'll depend on a Russian spacecraft docked at the station to serve as an emergency lifeboat.

But the Russian astronauts are also heavily dependent on NASA. The US segment makes up the majority of the space station, by area. Its solar panels provide most of the electricity, and its gyroscopes are crucial in controlling the station in orbit.

As a whole, the space station takes instructions from command centers in Houston and Korolyvov. The whole thing is designed to operate with both American and Russian involvement, and it's hard to imagine it surviving otherwise.

But NASA and Roscosmos seem headed for a breakup 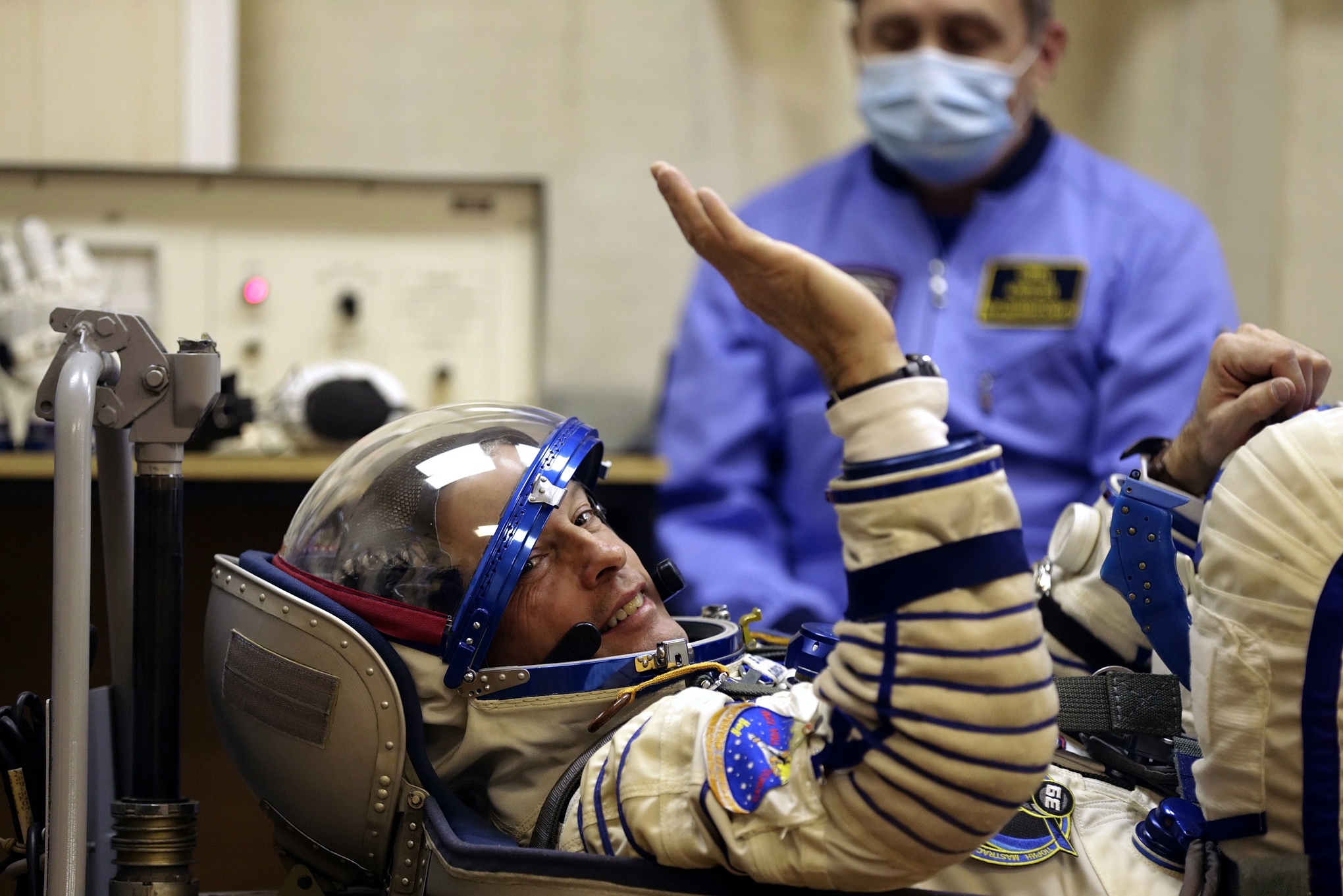 Even before the announcement, a few events suggested that political strife between US and Russia could spill over into the space relationship.

Last month, as part of the sanctions process, NASA announced that it would be suspending all non-essential contact with Russia. That order had lots of exceptions — including anything space station-related — but it clearly wasn't conducive to a good working relationship in space.

In response to the sanctions, Rogozin initially tweeted "I suggest to the USA to bring their astronauts to the International Space Station using a trampoline." With the announcement, he's apparently making good on that promise.

The recent events — and the Ukraine crisis as a whole — have made the need to develop American manned space transport more urgent. The current plan is for NASA to award a grant to one of three private companies (Boeing, Sierra Nevada, or SpaceX), so they can upgrade their cargo-carrying rockets for human use.

The day after Rogozin's initial tweet, a House subcommittee fully approved a $785 million NASA funding request for the private space flight plan — an increase from recent years — and added money to the Defense Department's 2015 budget specifically to develop an American replacement for the Russian-made rocket engines. 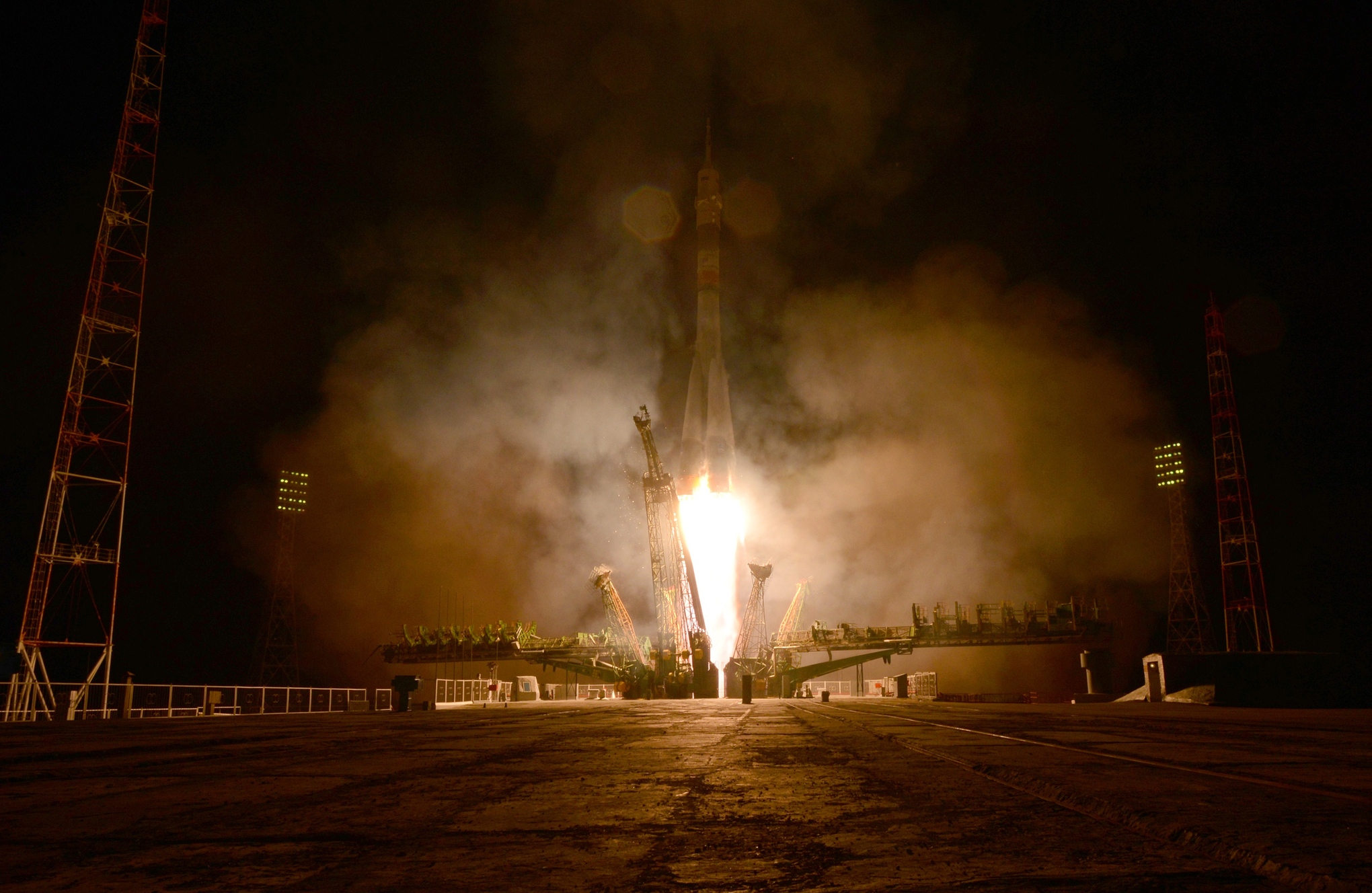 To make a difference right now, though, these appropriations would've needed to come years ago. Even with more money, the private companies likely won't be ready to carry humans to space until 2017, and the Lockheed Martin-Boeing venture would need a few years to develop a homegrown rocket engine alternative as well.

What's more, the International Space Station currently represents the entirety of manned space activities by NASA. The US can figure its own ways of putting astronauts in space, but it doesn't really have any destinations that don't involve Russia. When Obama cancelled the Moon program, he outlined vague plans to send a manned mission to an asteroid by 2025 and Mars sometime thereafter,  but many argue that these goals are unrealistic given current NASA funding levels.

For now, it seems, if NASA wants to have humans in space, it's dependent on American-Russian tensions being resolved in the next few years. "All this ought to serve as a wakeup call for Congress," Logsdon says. "If they don't provide more funding, we're going to continue along in this vulnerable situation."