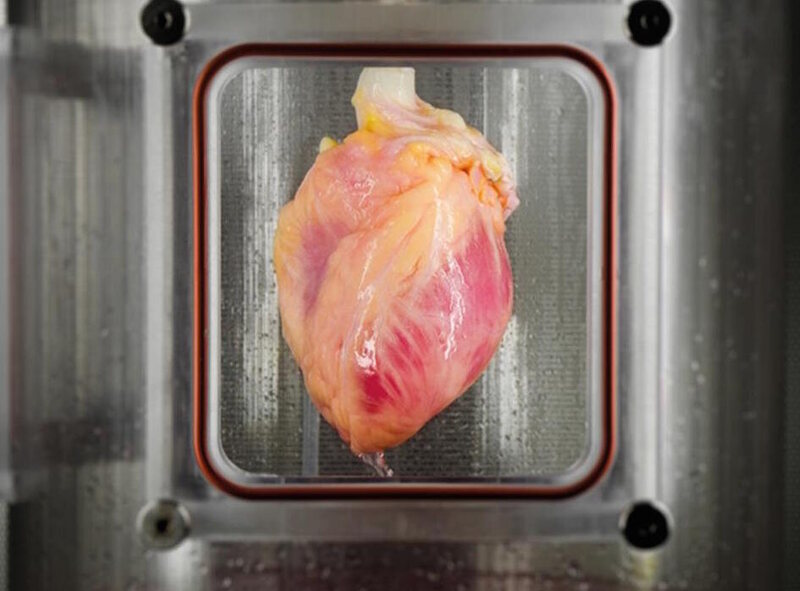 For decades now, there's been an image of human regeneration being a few cells dividing in a petri dish, hopefully growing into a shiny new organ. But the truth is that scientists' work is a bit more macabre. To make a new organ, it helps to be working from a dead one.

That goes for hearts, too. A little more than a decade ago, Dr. Harald Ott, now a surgeon at Massachusetts General Hospital and a professor at Harvard Medical School, developed a procedure that could rinse an organ of its cells, leaving behind an empty structure that can be repopulated with new ones. In the lab, Ott and his colleagues have taken ghostly hearts and resurrected them as new ones. Shocked with electrical pulses, those new hearts have even started beating again.

These regenerated organs are not yet strong enough to be subbed in for the originals in the human body. But that's the goal of this research: to be able to use a person's own cells to grow new body parts that can replace broken ones.

People have imagined saving failing bodies with replacement organs for centuries, but doctors have only been performing transplants successfully since the 1950s, when they began to understand exactly how the body's immune system would reject a foreign organ. In the first successful organ transplant, doctors removed a kidney from one identical twin and gave it to the other—the recipient's body accepted the kidney only because it came from his twin's. Today, to stave off organ rejection, anyone who receives a transplanted organ has to take drugs that suppress their immune system for the rest of their lives.

If an organ were to be grown from the body's own cells, though, the immune system would accept it. When Ott started working on tissue engineering, in the mid-'00s, scientists already had shown that was possible to coax stem cells into growing into particular tissues—they could grow heart muscles in a petri dish, essentially. But replicating the structure of a whole organ was exponentially more complicated. For instance, the heart tissue grown in a lab didn't have a delicate system of blood vessels laced through it.

The technique that Ott developed to decellularize organs got around part of that problem. In every organ, around the cells, there is a structure of water, proteins and other molecular compounds that support the actual cells—it's like a house the cells live in, or scaffolding that keeps them in place. But Ott discovered that, with the right combination of detergents, it's possible to slowly wash the cells out of this "extra-cellular matrix." Here's the process cleaning the cells out of a rat's limb:

What's left is like an outline of an organ, complete with the spaces for tiny blood vessels and other key features of the original. The next step is to repopulate it with cells that have not yet settled on an identity—usually adult cells that have been reprogrammed into stem cells. It's not as simple as just pumping cells back into the empty organ shell, though. Some combinations of different types of cells give better results than others, and they need very specific conditions to grow: the regenerating organs have to live in "bioreactors," which are basically specialized jars with customized solutions inside and carefully balanced pressure. Under these conditions, Ott's lab has regrown hearts and set them to beating again.

These organs are still shadow versions of fully grown organs. They contain only a portion of the hundreds of millions of cells needed, and they're not strong enough to replace originals. Even if researchers do succeed in creating a fully grown organ, there are still questions to be answered: What are the dangers, if any, of putting these organs into a person's body? How long will they last? Even at this still-early stage, though, these resurrected organs do seem like a partial miracle: a piece of dead flesh, regrown and reanimated.