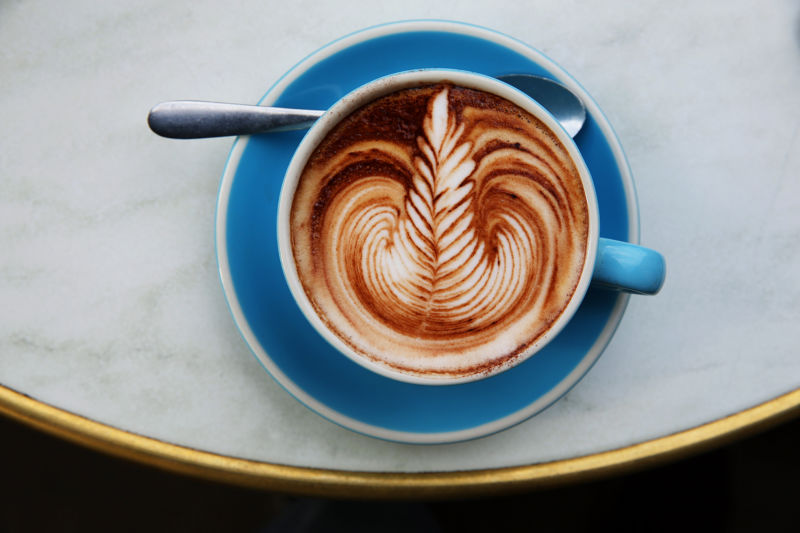 In the distant future, your morning cup of joe may not just perk up your brain—it may perk up your genes, too. At least, that's the optimistic outlook of some synthetic biologists in Switzerland.

A team led by Martin Fussenegger of ETH Zurich in Basel has shown that caffeine can be used as a trigger for synthetic genetic circuitry, which can then in turn do useful things for us—even correct or treat medical conditions. For a buzz-worthy proof of concept, the team engineered a system to treat type 2 diabetes in mice with sips of coffee, specifically Nespresso Volluto coffee. Essentially, when the animals drink the coffee (or any other caffeinated beverage), a synthetic genetic system in cells implanted in their abdomens switches on. This leads to the production of a hormone that increases insulin production and lowers blood sugar levels—thus successfully treating their diabetes after a simple morning brew.

The system, published Tuesday in Nature Communications, is just the start, Fussenegger and his colleagues suggest enthusiastically. "We think caffeine is a promising candidate in the quest for the most suitable inducer of gene expression," they write. They note that synthetic biologists like themselves have long been in pursuit of such inducers that can jolt artificial genetics. But earlier options had problems. These included antibiotics that can spur drug-resistance in bacteria and food additives that can have side effects. Caffeine, on the other hand, is non-toxic, cheap to produce, and only present in specific beverages, such as coffee and tea, they write. It's also wildly popular, with more than two billion cups of coffee poured each day worldwide.

"Capitalizing on routine cultural habits [coffee and tea drinking], therapies based on such systems should seamlessly integrate into people's lifestyle, and therefore could be a key pillar upon which the new generation of personalized medicine can build," they speculate.

For their proof of concept, the team started by tinkering with bits and pieces of molecules. The key component, of course, is one that can respond to caffeine in the bloodstream. For this they used an antibody generated in a camelid that can detect caffeine. Antibodies are generally proteins that help the body detect foreign substances—usually things like viruses and bacteria—but researchers have found ways to generate antibodies trained to specific substances by inoculating animals with those target substances, in this case caffeine. And camelids, such as llamas and camels, generate especially useful single-domain, stable antibodies.

In the presence of caffeine, this camelid antibody— aCaffVHH—binds to caffeine and then dimerizes. In other words, two aCaffVHHs join together, snuggling their caffeine molecule. The researchers plotted to exploit this joining. For instance, if they fused half of a protein to one antibody and the other half to a second antibody, then the antibodies could form a whole, functional protein when they dimerized. Or, if the researchers fused a protein to the antibodies that needed to dimerize to function, they could activate that protein just with the antibody's caffeine-induced dimerization.

They used this trick to reconstitute or activate a variety of protein regulators and signaling molecules, which control whether specific genes are turned on or off. With their trial regulator systems, Fussenegger's team tested each one for sensitivity and responsiveness to caffeine. The most finely tuned of these was a system that used a regulator called EpoR, which becomes active when its dimerizes and triggers a transcription factor, called STAT3. Like all transcription factors, STAT3 functions by binding specific bits of DNA to control gene expression.

For early tests, the researchers engineered the specific bits of DNA that STAT3 recognizes to be right in front of a gene for a reporter enzyme, called SEAP. This enzyme cleaves a specific substrate that researchers can sprinkle onto cells in the lab. Once cleaved by SEAP, that substrate glows. Thus, if there's glowing cells, the researchers know that their synthetic gene circuit worked and turned on SEAP.

The team tested out the system in immortalized stem cells. In this setup, segments of EpoR are fused to aCaffVHH, which both dimerized in the presence of caffeine and then activated STAT3 and led to the production of SEAP. The researchers found that the stem cells could sensitively turn on SEAP with a little caffeine buzz. The researchers even challenged the cells with actual caffeinated beverages, including Nespresso Grand Cru, Starbucks coffee, Red Bull, Cuida Te tea capsule, and Coca-Cola. The activity of STAT3 and SEAP corresponded well with the amount of caffeine in each of the pick-me-ups.

But this was just the warm up. To show potential, the researchers had to get STAT3 to turn on a gene that would be useful—not just a glowing gimmick for easy lab tests. As such, they engineered a STAT3-binding segment in their stem cells that would control a gene that encodes a synthetic human hormone called GLP-1 or glucagon-like peptide-1. This hormone triggers the production of insulin that in turn lowers blood sugar levels. Synthetic GLP-1 is considered a potential treatment for type 2 diabetes, which involves high blood sugar and insufficient amounts of insulin. The disease affects more than 400 million people worldwide.

The researchers packaged up these GLP-1-producing stem cells in a permeable capsule, then imbedded the capsule in the body cavities of mice that had diet-induced type 2 diabetes. After daily doses of Nespresso coffee, caffeine floated into the capsule and GLP-1 floated out. The diabetic mice had blood sugar levels similar to normal, wild-type mice. They also had much higher levels of insulin in their blood compared to diabetic mice without the GLP-1-producing implant. The researchers saw similarly successful results in mice genetically engineered to develop type 2 diabetes.

Importantly, the daily caffeine didn't cause any problems in the mice, such as increased heart rate or dangerously low blood-sugar levels. The researchers also noted that decaffeinated beverages didn't activate the system.

Fussenegger and his team are optimistic that their caffeine-based system could conveniently be harnessed for therapies in the future. They even suggest that with further fine-tuning, they could generate personalized systems to match each patient's preference for caffeine intake.

There is, of course, a massive amount of work between this proof of concept in mice and a viable treatment in humans. There's also a plethora of human-specific issues that need to be worked out, such as overall safety, timing of caffeine consumption, potential disruption of sleep with caffeinated therapies, and how the cell implants would work in humans. Still, Fussenegger and his colleagues are dreaming of a world where receiving medical treatments means a trip to a cafe.