For 500 years, the painted wooden effigy of St George that adorns a chapel in the Spanish town of Estella has been locked in a silent struggle against his old foe, the dragon.

Today, however, the saint faces a different battle thanks to a feat of restoration that has prompted comparisons with the infamous "Ecce Homo Monkey Christ" and exasperated the mayor. 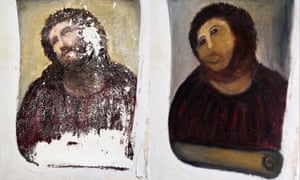 The Ecce Homo-style fresco of Christ before and after restoration. Photograph: Centro de estudios Borjanos/AP

An attempt to freshen up the 16th-century polychrome statue has left St George with a rosy pink face and a bold, red-and-grey suit of armour. The restoration is believed to have been carried out by a handicrafts teacher at the request of the parish authorities of the Church of St Michael.

The mayor of Estella, which lies south-west of Pamplona in the Navarre region, is demanding to know why the council was not consulted before the work went ahead.

Koldo Leoz told the Guardian: "The parish decided on its own to take action to restore the statue and gave the job to a local handicrafts teacher. The council wasn't told and neither was the regional government of Navarre."

The mayor said he had been to see the statue and was not happy with the result. "It's not been the kind of restoration that it should have been for this 16th-century statue. They've used plaster and the wrong kind of paint and it's possible that the original layers of paint have been lost."

Leoz said experts had been called in and were checking whether it would be possible to undo the restoration work and restore the statue to its previous state.

"This is an expert job it should have been done by experts," he added.

"Today, Estella isn't in the news because of its spectacular historical, artistic, architectural or cultural heritage," he tweeted on Monday, above a picture from the local paper headlined: "Navarre's own Ecce Homo."

It was in the news, he added, "because of the unfortunate actions in regard to a 16th-century statue of St George that can be found within one of the most impressive religious temples in the city".

Six years ago, a well-intentioned woman's attempts to restore a fresco of the scourged Christ in a church in the north-eastern Spanish city of Borja went viral, with her efforts dubbed "the worst restoration in history".

However, Cecilia Giménez soon found herself a minor celebrity after visitors flocked to the church to see her handiwork.