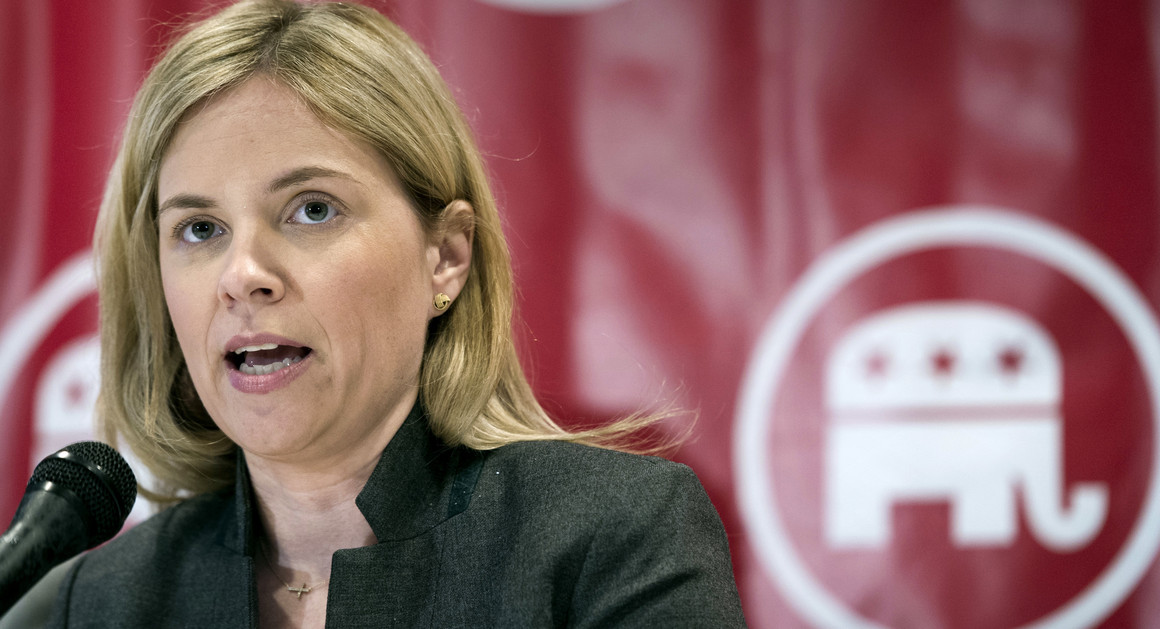 President Donald Trump on Thursday launched his first West Wing shake-up less than three months into his term, sending deputy chief of staff Katie Walsh to bolster the flagging outside group that was meant to support his agenda.

The move caps a rough stretch for Trump, who has seen his young administration dogged by controversy, his travel ban executive order blocked twice in court, and a health care bill he supported go down in flames.

The outside political group that Walsh is joining, America First Policies, is stocked with veterans of the campaign and has been struggling to get off the ground.

White House officials said the decision for Walsh to depart was precipitated by the failed health care vote last Friday. Over the weekend, she approached senior adviser Jared Kushner and chief of staff Reince Priebus about bolstering the outside efforts and they, along with chief strategist Steve Bannon, blessed the move, the officials said.

White House officials had complained to POLITICO about the group's absence amid the health care debate. "America First [Policies] has turned into an embarrassment," one official said last week.

Kushner, Priebus and Bannon briefed a small group of reporters about the move on Thursday afternoon and insisted it was less shake-up and more rebooting of an outside effort that they believe failed them in their first, crucial legislative showdown.

"It was abundantly clear we didn't have air cover," Priebus said. "No one can fix this problem better than Katie Walsh."

Walsh's departure to the outside group came the exact same day that Trump himself tweeted threateningly about going after the House Freedom Caucus in 2018. "We must fight them, & Dems, in 2018!" Trump wrote.

Kushner hailed Walsh as "one of the unsung heroes of the campaign" and said, "I'm very supportive of Katie and the sacrifice she's making" by leaving.

Walsh, a close ally of Priebus, served as chief of staff at the Republican National Committee when Priebus was chairman, and she was one of a number of RNC staffers he brought with him to the White House, including press secretary Sean Spicer.

Bannon said Walsh's departure would be a loss for the White House but benefit the America First Policies. "Katie's a vital link that pulls things together and makes things happen," he said.

The move could also have significant implications for Priebus, who is losing one of his top lieutenants in the West Wing. "He basically took away Reince's political secret service. She was his eyes and ears inside," said a source close to Trump.

White House officials on Thursday tried to tamp down speculation that Walsh's departure, given her closeness to Priebus, was the first step in broader upheaval that could swallow Trump's top aide.

"Reince is not next," said a top White House official.

Walsh was one of the few top women in the West Wing, along with counselor Kellyanne Conway, and her departure leaves Trump's White House even more male-centric than before.

Walsh is the latest high-level staffer to depart the White House just over two months into Trump's presidency. National Security Adviser Michael Flynn was ousted for misleading the vice president about his conversations with the Russian ambassador, and communications official Boris Ephsteyn was also recently let go.

Walsh, in her early 30s, has enjoyed a rapid rise in D.C. She was named deputy finance director at the RNC in January 2013 before her 30th birthday, and was elevated to the top finance job just six months later. She helped lead the RNC's mammoth fundraising operation through the 2014 midterm elections, and she became chief of staff under Priebus at the RNC in 2015.

As an RNC veteran, she brought her ties to the Republican establishment with her to the White House, contrasting with insurgent Republicans like policy adviser Stephen Miller and Bannon.