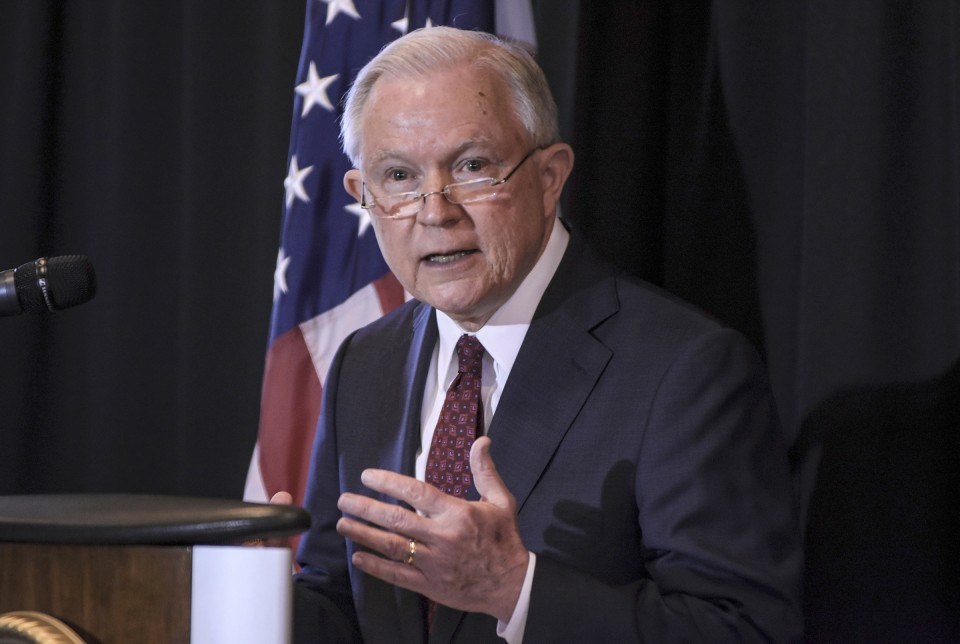 Attorney General Jeff Sessions on Thursday used a Bible verse to defend his department's policy of prosecuting everyone who crosses the border from Mexico, suggesting that God supports the government in separating immigrant parents from their children.

"I would cite you to the Apostle Paul and his clear and wise command in Romans 13, to obey the laws of the government because God has ordained the government for his purposes," Sessions said during a speech to law enforcement officers in Fort Wayne, Ind. "Orderly and lawful processes are good in themselves. Consistent and fair application of the law is in itself a good and moral thing, and that protects the weak and protects the lawful."

Government officials occasionally refer to the Bible as a line of argument — take, for instance, the Republicans who have quoted 2 Thessalonians ("if a man will not work, he shall not eat") to justify more stringent food stamps requirements.

But the verse that Sessions cited, Romans 13, is an unusual choice.

The other, Fea said, "is in the 1840s and 1850s, when Romans 13 is invoked by defenders of the South or defenders of slavery to ward off abolitionists who believed that slavery is wrong. I mean, this is the same argument that Southern slaveholders and the advocates of a Southern way of life made."

In May, Sessions announced a zero-tolerance policy in which the Justice Department would begin prosecuting everyone who crosses the Southwest border. Part of the policy shift meant that migrants traveling with children or unaccompanied minors end up detained instead of released; U.S. immigration law charges adults with a crime, but not the children, which means they're held separately.

The Associated Press cited U.S. Customs and Border Protection figures from two weeks in May in which more than 650 children were separated from parents. Reports from the same month that the government lost track of 1,475 children sparked a national outcry; those reports were later disputed.

Sessions has said "we've got to get this message out" that asylum seekers or anyone else immigrating through unofficial means is not given immunity. He appealed to "church friends" later in Thursday's speech in Fort Wayne, emphasizing that non-citizens who enter the United States illegally are breaking the law.

On the same issue, other religious groups and individuals have cited the Bible as well, to take the opposite side.

"Overwhelmingly, Scripture causes families to be kept together," said Gabriel Salguero, president of the National Latino Evangelical Coalition. "Overwhelmingly Scripture causes us to defend families. As Evangelicals, we have a doctrine to be a pro-family-values people, you know. The Bible calls us to be pro-family, and I personally find it deeply lamentable that we are separating children from their parents at the border or anywhere."

Likewise, on Thursday afternoon, the Migrants and Refugees Section at the Vatican tweeted a verse of Deuteronomy:

"The Bible teaches that God 'loves the foreigner residing among you, giving them food and clothing. And you are to love those who are foreigners, for you yourselves were foreigners in Egypt' (Deuteronomy 10:18-19)." Pope Francis pic.twitter.com/Yt8i7b39VN

At a meeting of the U.S. Conference of Catholic Bishops on Wednesday, the nation's Catholic leaders strongly condemned the administration's immigration policies as immoral, with one bishop going so far as to suggest that Catholics who help carry out the Justice Department's policies are violating their faith and perhaps should be denied Communion.

White House press secretary Sarah Huckabee Sanders said during a briefing Thursday that she hadn't seen Sessions's comments, but she backed his line of thinking.

"I can say that it is very biblical to enforce the law. That is actually repeated a number of times throughout the Bible," she said. "It's a moral policy to follow and enforce the law."

Fea, the American history professor, said that after the Civil War, historians don't see many references to Romans 13 because the essence of the passage — submission to authority — is regarded as un-American.

"America was built and born on rebellion and a sort of radical resistance to authority," Fea said. "Whenever Romans 13 was used in the 18th and the 19th century — and Sessions seems to be doing the same thing, so in this sense there is some continuity — it's a way of manipulating the scriptures to justify your own political agenda."

The chapter itself can be interpreted in varying ways.

"Romans 13 says that the purpose of government is to pursue what is good, and it says that the government should not be a terror for those who are doing good," said Matthew Soerens, U.S. director of church mobilization for World Relief, the humanitarian arm of the National Association of Evangelicals.

"You cannot read Romans 13 without reading Romans 12," Salguero said, pointing to the prior chapter, which in part suggests that love must be the guide instead of evil.

Besides, as Soerens points out, the person in the Bible whom Sessions referenced ran afoul of the law.

"The fact that the Apostle Paul, who wrote Romans, wrote several epistles from jail suggests that he was occasionally on the wrong side of an unjust law," Soerens said.

Hannah Natanson contributed to this report.

Sessions defends separating immigrant parents and children: 'We've got to get this message out'