At first, Yury Scherbakov thought the cracks appearing in a wall he had installed in his two-room flat were caused by shoddy workmanship. But then other walls started cracking, and then the floor started to incline. "We sat on the couch and could feel it tilt," says his wife, Nadezhda, as they carry furniture out of the flat.

Yury wasn't a poor craftsman, and Nadezhda wasn't crazy: one corner of their five-storey building at 59 Talnakhskaya Street in the northern Russian city of Norilsk was sinking as the permafrost underneath it thawed and the foundation slowly disintegrated. In March 2015, local authorities posted notices in the stairwells that the building was condemned.

Cracking and collapsing structures are a growing problem in cities like Norilsk - a nickel-producing centre of 177,000 people located 180 miles above the Arctic Circle - as climate change thaws the perennially frozen soil and increases precipitation. Valery Tereshkov, deputy head of the emergencies ministry in the Krasnoyarsk region, wrote in an article this year that almost 60% of all buildings in Norilsk have been deformed as a result of climate change shrinking the permafrost zone. Local engineers said more than 100 residential buildings, or one-tenth of the housing fund, have been vacated here due to damage from thawing permafrost.

In most cases, these are slow-motion wrecks that can be patched up or prevented by engineering solutions. But if a foundation shifts suddenly it can put lives at risk: cement slabs broke a doctor's legs when the front steps and overhanging roof of a Norilsk blood bank collapsed in June 2015. Building and maintenance costs will have to be ramped up to keep cities in Russia's resource-rich north running. 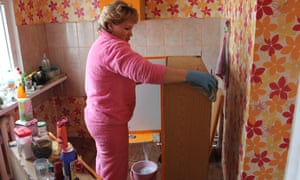 Nadezhda Scherbakova moves furniture out of her flat after thawing permafrost caused the structure to crack. Photograph: Alec Luhn

Engineers and geologists are careful to note that "technogenic factors" like sewer and building heat and chemical pollution are also warming the permafrost in places like Norilsk, the most polluted city in Russia. But climate change is deepening the thaw and speeding up the destruction, at the very same time that Russia is establishing new military bases and oil-drilling infrastructure across the Arctic. Greenpeace has warned that permafrost thawing has caused thousands of oil and gas pipeline breaks.

"There were problems there before, but climate change exacerbates them," says Ali Kerimov, an engineer at Foundation Research and Production in Norilsk. "We need to study each case separately to understand what awaits us with climate change."

Global warming has been tied to more frequent forest fires and flooding across Russia, but its impact on permafrost, which covers two-thirds of the country's territory, is also beginning to be felt. At least seven giant craters have been discovered in Siberia - reportedly caused by thawing permafrost allowing methane to explode out of the ground - and a 12-year-old boy in Salekhard died from anthrax in August after thawing released bacteria.

Arctic islands and the northern coastline - and scientific outposts there - are disappearing into the sea as permafrost thaws, sea ice melts and wave action increases. Valery Grebenets of Moscow State University's department of cryolithology and glaciology teaches his students 13 "horror stories" about thawing permafrost, including buckling roads and railways, soil runoff killing fish and the release of toxic and radioactive pollutants contained by frozen dams. 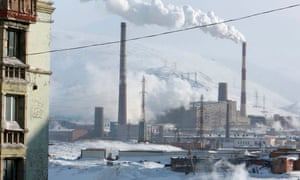 Norilsk, home to many heavy industry factories, is the most polluted city in Russia. Photograph: Denis Sinyakov/Reuters

Flying into Norilsk at the end of August, when the vegetation of the treeless tundra was already turning orange and spots of snow were on the ground from an early storm, it's hard to picture this warming. Built by gulag prisoners starting in 1935, the city gets more than six weeks of polar night and up to 2m tonnes of snow each winter, when the temperature can drop below -51C (-60F).

But average annual temperatures in the Arctic are rising faster than anywhere else - more than 2C since 1900, and a 2015 study found increases in soil temperatures across Russia's permafrost regions over the last 50 years. Soil temperatures in Norilsk increased by almost 1C between 1999 and 2013.

The term permafrost is somewhat a misnomer: while deeper soil remains frozen year-round, the "active layer" of soil extending several feet below the surface thaws each summer. It thaws unevenly, contorting and warping buildings. To avoid this, in the 1960s builders of apartment blocks in Norilsk began drilling holes up to 100-ft deep and pouring reinforced concrete piles that stuck into the permanently frozen soil below. The piles also lifted each building off the ground, allowing air circulation to cool the soil and preventing further thawing.

More than 100,000 people are living in buildings in "critical condition" across Russia's far north

Engineers didn't think the soil could start warming so much, however. Data from a Norilsk monitoring station showed the active layer has been thawing earlier and its thickness has increased from three feet to five feet. In addition, climate change has increased precipitation, adding more moisture to the soil that freezes and expands, gradually crumbling the concrete piles. More snow covers the ground and further warms the permafrost.

"In most cases the effect of climate change was not accounted for properly or at all, so the story is not about one building falling, even though there are examples of that, but about thousands of people living in buildings which have the potential to fall," says Dmitry Streletskiy, an assistant professor of geography at George Washington University.

The problem also threatens Alaska, Canada and other northern territories, but only Russia has cities so far north. Forty percent of buildings in the coal mining city Vorkuta have been damaged, the emergencies ministry's Tereshkov says. Salekhard, Nadym and Dudinka, the port on the Yenisei River through which Norilsk Nickel ships its products, have also seen deformations, among others. More than 100,000 people are living in buildings in "critical condition" across Russia's far north, Streletskiy estimates.

At 59 Talnakhskaya Street, an 80-apartment building dating to the 1960s, the sinking corner became visible when a giant crack appeared on the side. Workers cemented it over and propped up the corner with logs, but the deformation continued. 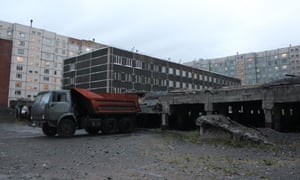 The site of a nine-storey block of flats in Norilsk that was torn down after the foundations became deformed and cracks became visible. Photograph: Alec Luhn

Tatiana, a fire protection engineer who lives in the building with her son and husband, says she found out it was condemned from the TV news, although they had seen cracks and tears in the wallpaper.

"When I saw the television report, I thought they were talking about the building next door. You don't think that you could be relocated," she says. "We've lived in the building for 15 years, and nothing suggested this would happen."

The city has been offering residents replacement homes elsewhere. Even the front doors have been removed from many vacated flats, leaving only the occasional ratty chair, empty vodka bottle or Iron Maiden poster. The slight tilt to the worst-hit stairwell creates the same disorienting sensation as the shifting floors of a carnival funhouse. But a handful of flats are still occupied; Tatiana is waiting for an appraisal so her family can receive compensation.

I think the problem [of climate change] is exaggerated. Our icebreakers won't be out of work for the next 100 years

It's a story that has repeated itself again and again in Norilsk; buildings have been partially or fully torn down, leaving only drooping foundations. Demolitions often have to be done by hand and cost 15 to 20 million roubles (£195,000-260,000) each, Kerimov says.

Norilsk city hall referred requests for commentary to the construction company NorilskStroiRekonstruktsiya, which says it has done work to strengthen the foundations of "almost all the buildings in Norilsk". At least nine unsalvageable buildings have been torn down in the past decade, according to manager Vladislav Petrovsky.

If temperature monitoring or visible deformations tip maintenance workers off in time, structures can be saved. Thermosyphons were installed to cool the soil under the apartment block at 36 Nansen Street when temperature probes showed warming there, for instance.

But sometimes changes come too suddenly. A brick office building on Komsomolskaya street cracked like an egg one September morning in 2009 and stands empty to this day. A top corner of the building pitched forward 70cm, sending jagged fissures up the middle of its facade and squashing windows. 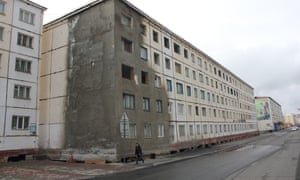 Workers tried to plaster over the cracks of 59 Talknakhskaya Street, but the building soon sank too low and had to be condemned. Photograph: Alec Luhn

Zoya Yanchenko, a botanist at the Institute of Arctic Agriculture and Environment, went into the building the next day to retrieve her equipment. "When we saw what had happened, it was terrifying," she said. "It made my head spin, because the floor was at an angle. It wasn't for the weak-nerved."

"Happily there weren't any human casualties in 2009 because it was 3am and the building was empty," Kerimov said. But things could have been very different had it been daytime.

Norilsk mayor Oleg Kurilov created a "permafrost council" of Kerimov and other experts in 2014 to try to preserve building foundations. Kerimov has been campaigning for stricter building codes to be drafted for the far north and has presented ideas to deputy prime minister Dmitry Rogozin. But it's questionable whether the political will is there to address the challenge, since many local officials and residents like those at 59 Talnakhskaya have doubts about climate change.

"I think the problem is exaggerated. Our icebreakers won't be out of work for the next 100 years," says Alexei Novakov, director of the port in Dudinka, when asked about climate change, which he argues is part of a "natural cycle". Although Grebenets warns that as permafrost retreats from the river bank, piers and other structures there could be compromised, Novakov says he didn't "see any trend that piers have suddenly started to be destroyed".

This skepticism goes all the way to the top: president Vladimir Putin has in the past voiced doubt that human activity is behind climate change and suggested warmer temperatures will benefit the country. Russian media rarely mentions the issue.

Adapting northern cities to climate change is also a difficult sell due to the price tag: costs typically increase by 30 to 40% to build a structure able to withstand more volatile permafrost conditions, Kerimov says. Residents of 59 Talnakhskaya have already called for the city to spend more money on keeping up buildings and monitoring soil conditions - but recession and sanctions make funds hard to find.

"Many climate change problems are solved by investment, spending on engineering. Where will we get this investment? Will local budgets find this money?" asks Oleg Anisimov, head of the climatology department at the State Hydrological Institute in St Petersburg. "With the dollar at 70 roubles, the budget in the north won't be enough."

"The peasant won't cross himself until the thunder crashes," Kerimov says, using a Russian folk saying. "As long as there's no catastrophe with human casualties, nobody will do anything."