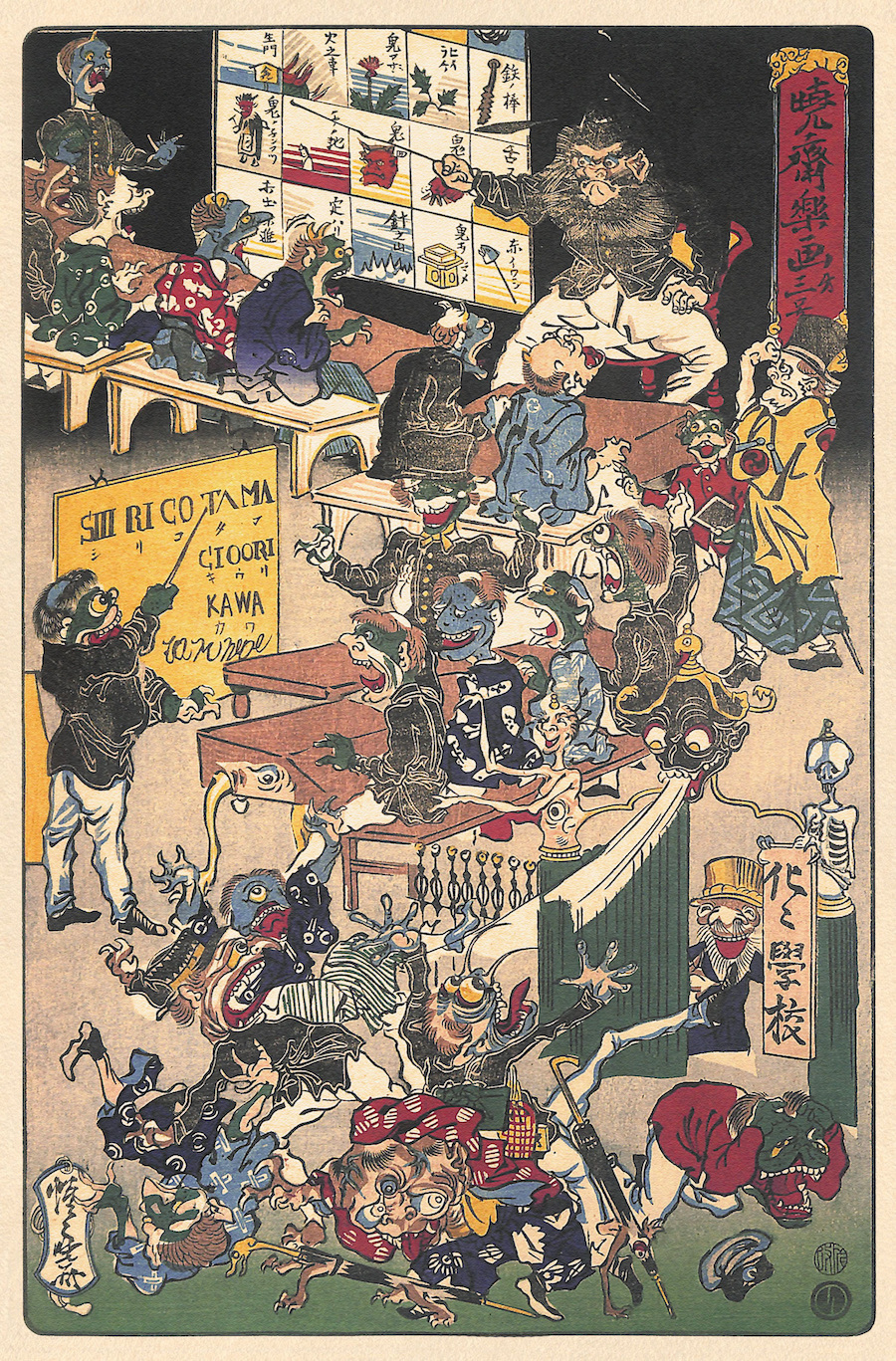 "School for Spooks" by Kawanabe Kyōsai 1864. A larger version can be seen here.

Born 1831 in Koga, Japan, artist Kawanabe Kyōsai (sometimes noted as Kawanabe Gyosai) had the distinction of being a highly influential artist during both the Edo period (1603-1867) and the Meiji period (1868-1912). Another distinction Kyōsai earned during his career was being known as "the demon of painting" most likely a nod to the volume and diversity of work Kyōsai produced which was admired by influential creatives not only in Japan but in France and the UK while he was active. His work during the Meiji period was known for its infusion of politics and satire as well as his use of caricature which got him in trouble with the authorities. What exactly ticked the cops off is a bit murky. Some cite following a night of pounding sake with his fellow artists and writers, Kyōsai was arrested for creating works which were critical of Japanese political figures and the police. One of Kyōsai's paintings "Instructions for Drinking Parties" (1870) has also been named as a culprit in this caper as it was suspected of portraying Westerners and Japanese engaged in acts of "sodomy" and sent him to the slammer. Kyōsai spent three months in jail and received 50 lashes just for creating art.

As far as Kyōsai's early life, there are a couple of different historical accounts regarding the artist's father. Some sources indicate that Kyōsai was the "son of a samurai" while others note his father was a rice merchant in Koga. What is not in dispute is that Kyōsai's father noticed his son's talent at the tender age of three before enrolling the child in formal art training at the Kanō school at the age of six or seven, later moving on to the Surugadai branch of the Kano School. During this time in Kyōsai's young life, it has been documented that he traveled down to a river and pulled out a human head (noted in the book Yurei: The Japanese Ghost), which he proceeded to use as a model of sorts before being discovered and told by his family to toss it back where he found it. At the age of 21, Kyōsai's work was already legendary, as was his unhinged behavior and epic consumption of sake. Allegedly Kyōsai would have 1.8 liters of sake delivered to his house every morning, often downing three or so bottles before noon. Perhaps this bit of history regarding Kyōsai might make you wonder how the fuck does one paint with the deft and precision of a master while getting bombed on rice wine? Here's more from a friend of Kyōsai, Japanese journalist and writer Kanagaki Robun on Kyōsai's "creative process:"

"At about 11 o'clock in the morning on 30 June 1880, the renowned Japanese painter Kawanabe Kyōsai started work on his great curtain for the Shintomi theatre. It was to be a version of the classic subject the One Hundred Demons, and as Kyōsai wielded his huge painting broom, their faces began to take shape. But there was something different about them. These were not the elegant forms of the Ukiyo-e painters. They were wild-eyed, manic creatures who moved across the picture in a frenzy of diabolical abomination. This was Kyōsai "crazy painting."

Perhaps it was the booze which brought the best out of Kyōsai; it was also likely instrumental in elevating the artist's more ribald works, including one you have probably seen before—his bizarre "Fart Battle" (1867) which was a form of political protest meant to address the encroachment of Western influence in Japan and its impacts on Japanese customs and lifestyles. This was a theme/sentiment he incorporated into his art for the majority of his long career. I've posted images of Kyōsai's work below which include his famous series Sketches of Hell commissioned in the 1870s by surgeon and Japanese art collector William Anderson. Much of what follows is NSFW. 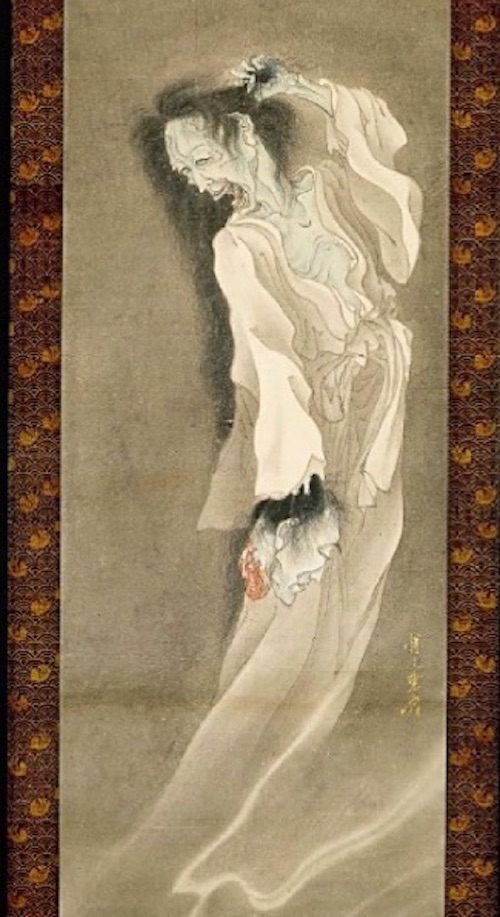 A vision painted recalling the severed head Kyōsai fished out of a river as a child. 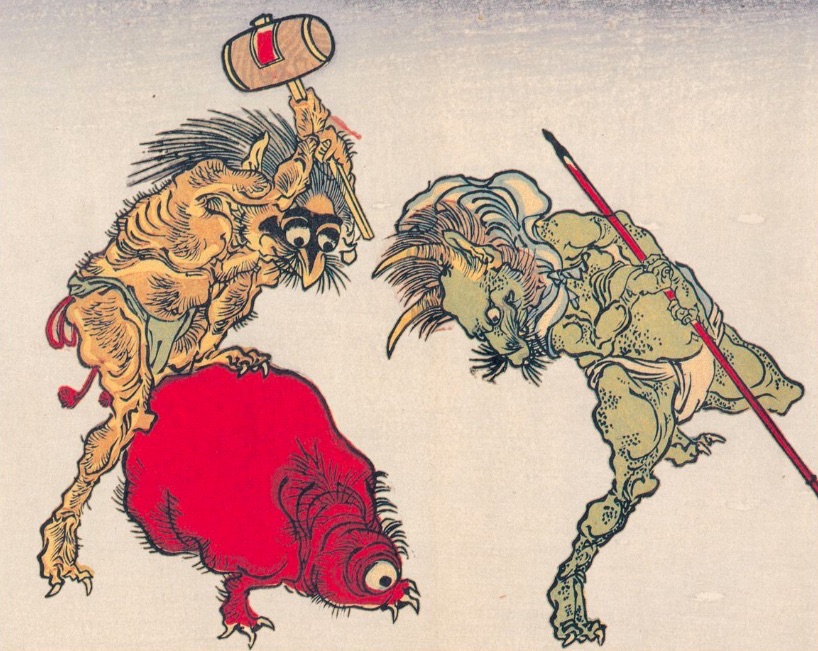 A few of Kyōsai's monsters. 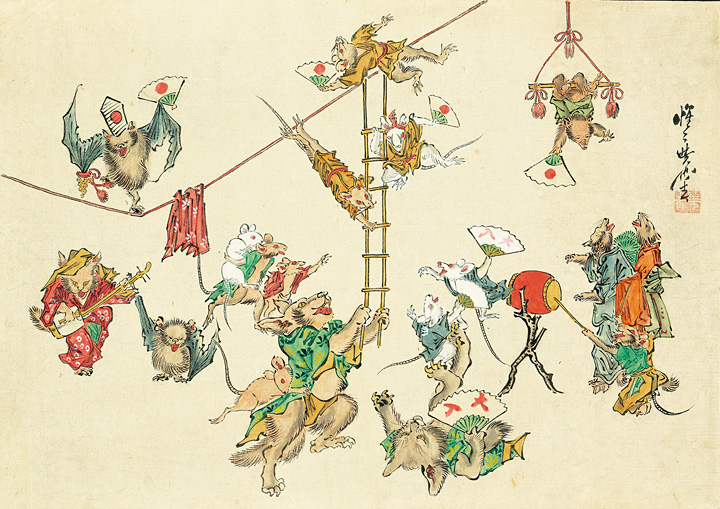 "Cat borne in triumph on gourd by rats, accompanied by cat ridden by rats" circa 1879. 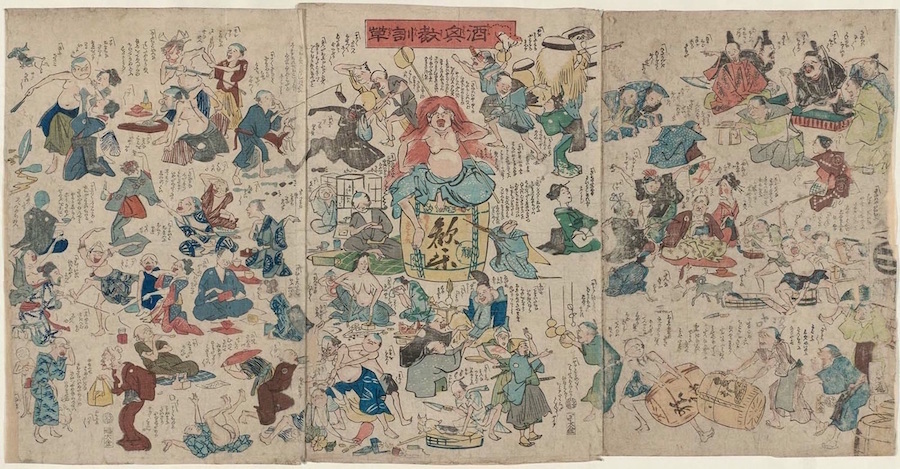 "Instructions for Drinking Parties." If you'd like to try to spot the alleged act of sodomy yourself, a larger image can be seen here. 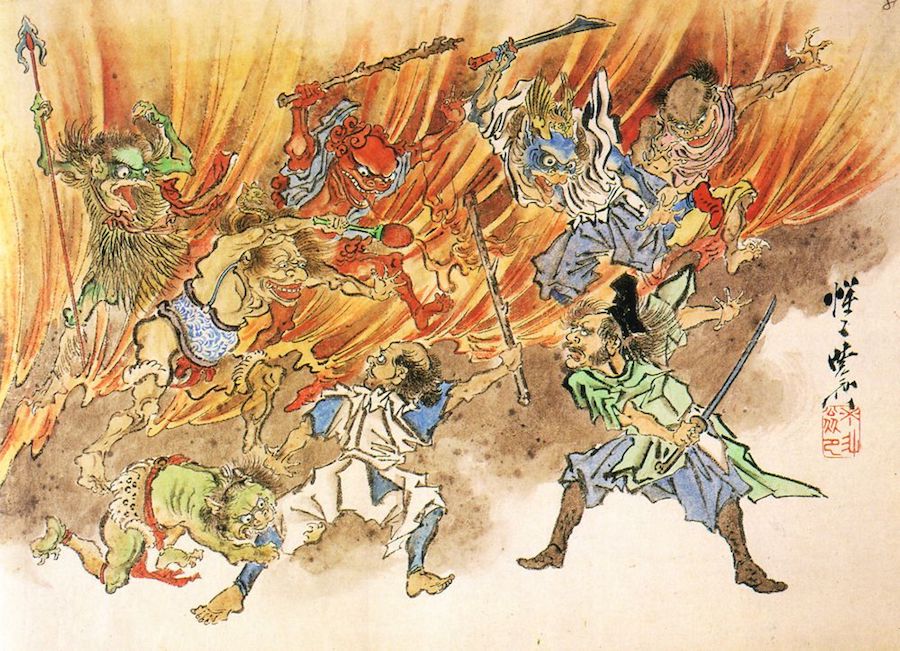 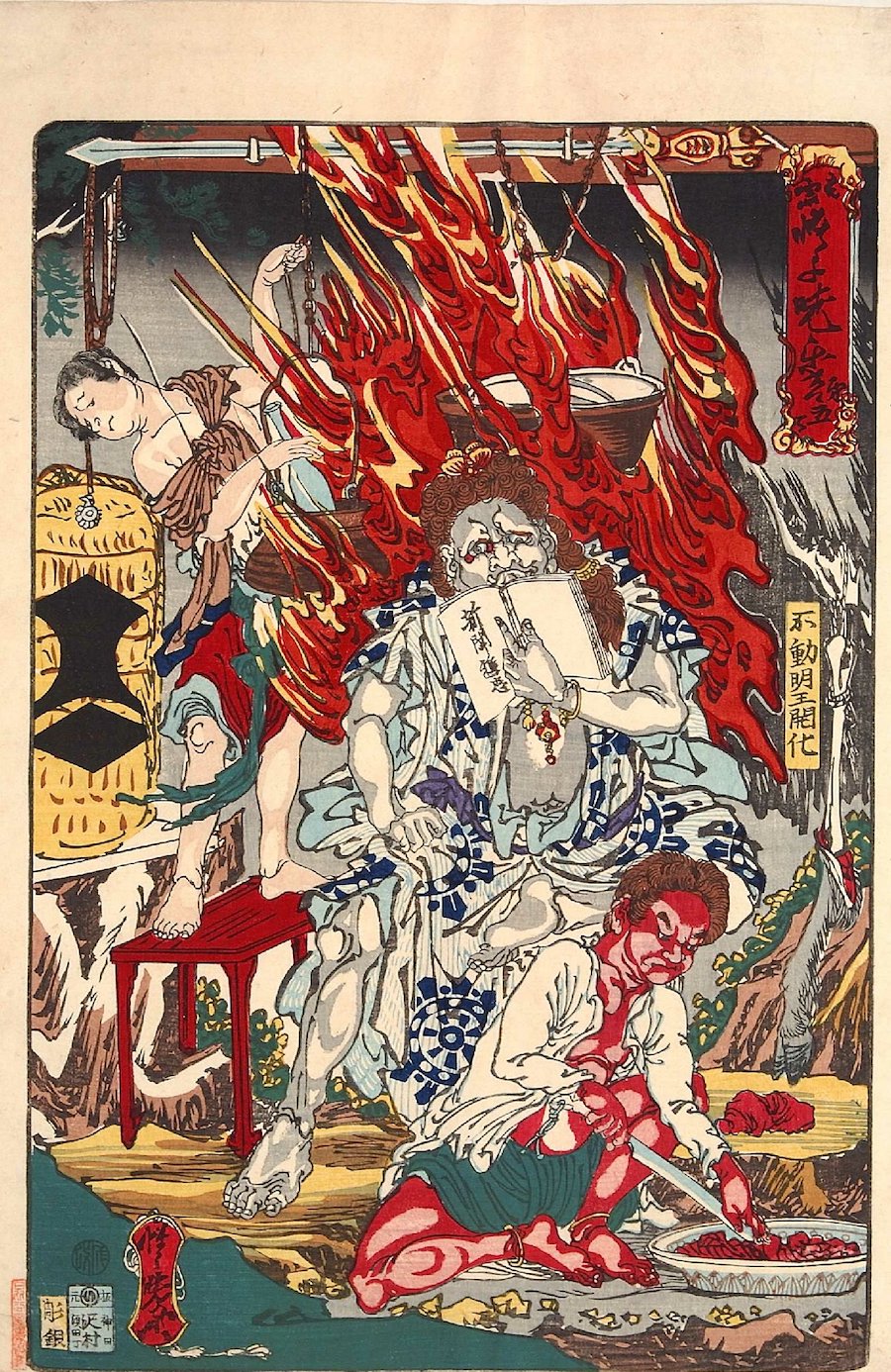 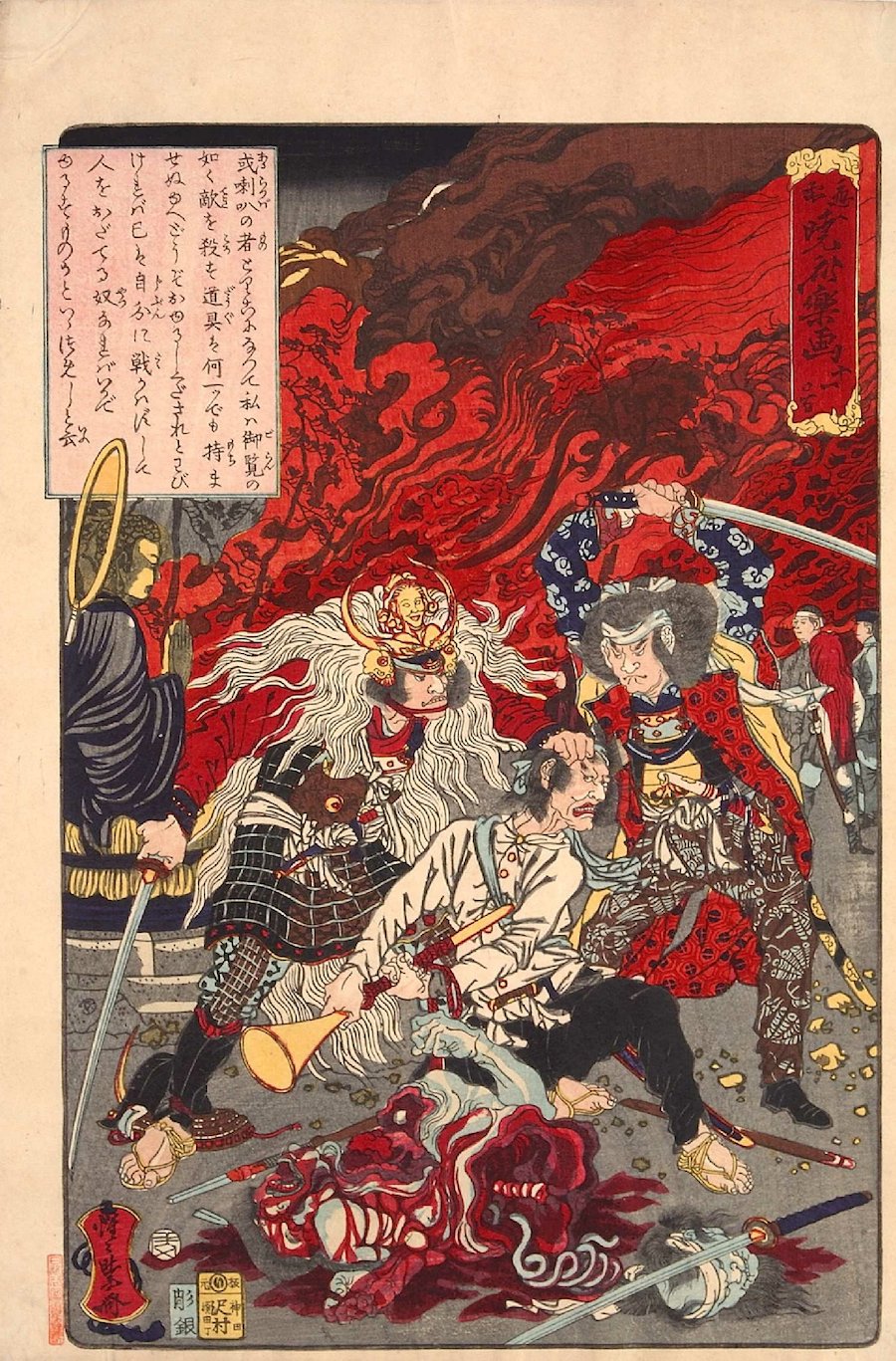 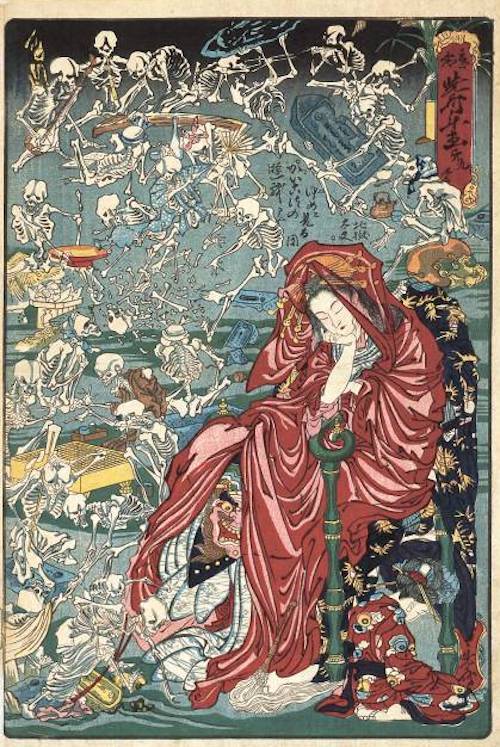 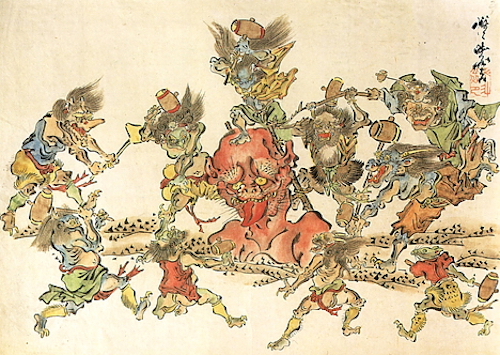 "Bashing the Monster to the Ground." 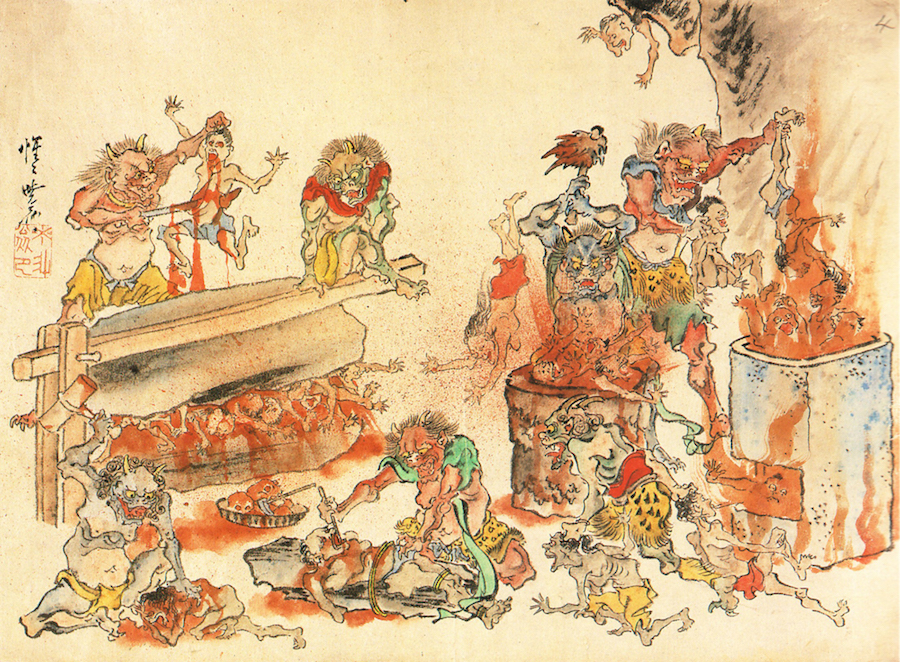 From Kyōsai's series 'Sketches of Hell.' 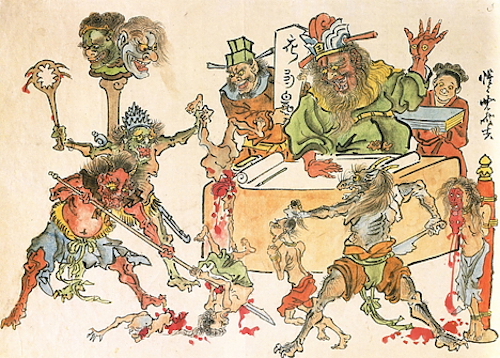 "Enna's Judgement" from the "Sketches from Hell" series. 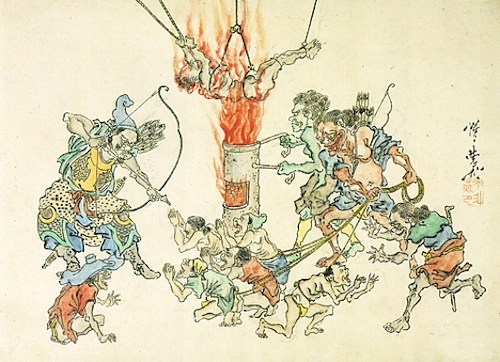 "Burning at the Stake."