Sitting in front of her PC, the phone in her hand connected to a tech support company half a world away, Sheryl Novick was about to get scammed.

The company she had reached, PCCare247, was based in India but had built a lucrative business advertising over the Internet to Americans, encouraging them to call for tech support. After glimpsing something odd on her computer, Novick did so.

"I saw some sort of pop-up and I don't know if there's a problem," she told a PCCare247 tech named Yakeen. He offered to check the "management part" of her computer for possible problems.

"This is very, very important part of the computer and it work like the human brain, all the major decision, all the action, all the result is taken by this management part," Yakeen said in a strong accent relayed over a poor-quality phone line that sometimes made comprehension difficult. All he needed to run his test was total control of Novick's Windows computer.

She agreed, downloading and installing a remote access tool. When it was in place, Yakeen reached out through the Internet, took control of Novick's mouse cursor, and opened a program called Event Viewer. The scam was about to begin.

Event Viewer is a built-in Windows tool designed to make visible the millions of mostly unimportant background activities running beneath the hood of a modern computer. Few mainstream computer users have even heard of it, much less run Event Viewer of their own volition—which explains why few mainstream users would know that, in a system as complex as Windows, Event Viewer will always display errors, most of them trivial. Thus, should someone want to convince mainstream users that their computers are riddled with problems, Event Viewer is a reliable combination of the inscrutable and the terrifying. 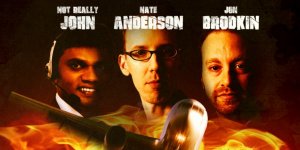 Cold caller from "Windows Technical Support" asks for remote access to my PC.

"It has 30 errors," he told her, while a separate subsection of Event Viewer showed 43 more. Based on these 73 problems, Yakeen formulated a quick and utterly improbable diagnosis for Novick's problems.

"Your computer is hacked by someone," he said. "They are using your name and your ID, your computer to do some cyber fraud and cyber terrorism."

Leaving no time for Novick to raise questions about how obscure Windows errors might indicate the presence of terrorist hackers, Yakeen opened a command prompt on Novick's machine and ran a text-based tool called "netstat." Netstat shows all of a computer's network connections, both inbound and outgoing, and in this case it showed a single established link—one that pointed outside the US.

"I'm 100 percent sure and I strongly believe that you have some hacking issue working in your computer," Yakeen said as he pointed this out to Novick. "Your computer is being hacked by someone. And they are doing some criminal activity using your name, your computer, your computer address."

This was a brazen lie; forensic examination would later conclude that the single connection displayed by netstat was in fact the remote access tool that Yakeen was using at that moment to control Novick's machine.

To complete his examination, Yakeen then told Novick that he would scan her computer for viruses. To do so, he ran a command called "tree." Filenames immediately filled the screen, scrolling away in a blur as hundreds of new names took their place. When the list stopped moving, the command prompt read:

"Now can you see the number of virus found in your computer?" Yakeen asked.

"Yeah, 509 virus working your computer. And they are—the hacker are directing your information and your—it might be possible your e-mail account and your Facebook account is also hacked by the hacker because hacker are using your name and your password. All the data, photographs, radio, and your e-mail are already hacked by the hackers, so we have tried to recover all the data from the hackers and install an anti-hacking tool in your computer, okay?"

The situation sounded bad—unless you knew that the tree command used by Yakeen has nothing to do with viruses. It merely lists all files within a directory, showing them in a hierarchical "tree" arrangement of folders, subfolders, and files. The scrolling list had been entirely ordinary files on Novick's machine; it had stopped only because Yakeen had canceled its run. As for the words "509 virus found"—Yakeen had simply typed them out himself at the command prompt, hoping that Novick would believe them to be output from the "virus scanner."

PCCare247 said it was ready to "despise every technical folly ready to play mess with the lives of naïve techno greenhorns."

Yakeen didn't give Novick much time to think about the diagnosis; with the problem identified, he barreled into his sales pitch for a 45-minute cleaning of her computer. By the end of this process, Yakeen promised that he could "remove all the hackers, remove all the errors and 509 virus from the computer and recover all the data, okay?"

"Is there any way to do it cheaper?" she asked.

"Cheaper?" said Yakeen. "Okay, please hold the line because I am just discussing this issue with my accounts department and definitely I will give you a discount, okay?"

After a brief pause, the "accounts department" reduced the price to $360 and threw in three years of future tech support.

Yakeen transferred her to the floor "accounts manager," who offered a $300 plan that included two years of future tech support. Novick agreed and provided her credit card. She thanked PCCare247 for helping her out.

"That's our pleasure, ma'am, and because, you know, PCCare247 just focuses on the customer satisfaction," a company rep told her when the work was done. "Our main aim is to satisfy the customer needs, right?"

What Yakeen didn't know was that Novick was actually a Federal Trade Commission (FTC) investigator who had been assigned to global "tech support scams." She had recorded the entire encounter, which had been conducted using a clean PC located within an FTC lab.

After the call, the FTC sent Civil Investigative Demands—requests for information—to just about every US company that had done any sort of business with PCCare247: banks, credit card processors, domain registrars, telephone companies, Facebook, Google, and Microsoft. In October 2012, after months of work, agency lawyers had finally assembled their case into a 15-page complaint against PCCare247 and its owner, Vikas Agrawal (sometimes spelled Agarwal).

Sometimes scammers are just as likely to fall for a good con as anyone else.

"The Defendants operate a massive scheme that tricks consumers into spending approximately $139-$360 to fix non-existent problems with their computers," the complaint alleged.

Those fees added up to serious revenue for PCCare247. In just one year, from October 2010 to September 2011, $4 million had been deposited in the two main PCCare247 bank accounts—and that was just from US residents.

The company used this cash to build more business, spending more than $1 million through at least seven separate advertising accounts with Google. The money bought "sponsored search results" that appeared when users searched for terms, including "virus removal."

But PCCare247 went further, taking out ads on search terms like "mcafee phone number usa," "norton customer service," and "dell number for help." The ads themselves said things like "McAfee Support – Call +1-855-[redacted US phone number]" and pointed to domains like mcafee-support.pccare247.com. As numerous complaints attest, less savvy computer users searching the Internet for specific tech support phone numbers would see PCCare247's number near the top of their screens and assume that this was an official line.

The tactic reached huge numbers of people. One PCCare247 ad account with Google produced 71.7 million impressions; another generated 12.4 million more. According to records obtained by the FTC, these combined campaigns generated 1.5 million clicks—a 1.8 percent clickthrough rate. Rather than cold-calling people—a preferred tactic of many tech support scammers—PCCare247 instead placed its ads and waited for the calls for help to roll in. The calls were forwarded to PCCare247's operations in India, where people like Yakeen took over. Some may well have offered legitimate tech support, but even PCCare247 admits that not all did.

Not surprisingly, this business model produced complaints. In New York, the state in which PCCare247 lists its US headquarters (in a virtual office), the Better Business Bureau gave the company an "F" after receiving 27 complaints.

A typical complaint runs like this: a woman begins having computer issues late one night. She Googles "Norton" and, instead of calling Norton tech support, ends up dialing a PCCare247-linked company. The technician "told her that her computer was corrupted and being hacked and she had security issues and if it spread to other computers he would have to notify the FBI." The woman wakes her husband, who is agitated that she already provided her credit card number. He calls PCCare247 to demand they not charge his card but the tech "kept talking about hackers and wouldn't shut up." PCCare247 then charges the couple three times at $150 each. When the man calls back later, enraged at the charges, the company promises a refund and asks him "not to contact the State Police or anyone else."

Over at the FTC, 300 complaints poured in to the agency's Sentinel database. Reading through them serves as a reminder that most mainstream users have absolutely no idea how their computers work and that they will in fact seek out technical support when their speakers are on mute or when they can't eject a CD from the drive.

As one senior citizen, who thought he was calling Dell tech support, recounted: "described my problem to the man (heavy Indian accent) and he told me he needed to access my computer to see what the problem was. He took me to the site where he could access my computer using a specific code. After accessing my Dell computer, he said Oh My God. Your computer has been infected by dozens of viruses. There is a hacker in your computer accessing all your personal and banking information right now… I was scared at that time. I do a lot of shopping on the computer and have my banking and retirement information on it."

The companies processing financial transactions for PCCare247 were also unhappy with the constant stream of chargebacks and complaints. Vikas Agrawal had created many separate PayPal accounts, for instance, but at least three of them had been frozen and set to "Limited-High" status due to security concerns.

PCCare247 faced a constant battle to accept payments, especially credit cards. The company eventually went to a US resident named Navin Pasari, who applied for at least 13 merchant accounts—many of which were declined upfront or cancelled later due to excessive chargebacks.

Given this history, it wasn't difficult for the FTC to obtain a temporary restraining order (TRO) against PCCare247, an order that made it all but impossible to do business in the US. Most of the company's cash had already been transferred to Indian banks (only $1,700 was left in US accounts), where it would prove hard to reach, but the TRO did shut down the company's domain name, local phone numbers, and credit card processing. New money would not be flowing.

"The FTC litigation has effectively shut down the [PCCare247] business," the company complained to the federal judge overseeing its case. It admitted to "some improper conduct" but attributed this only to "some overzealous sales personnel [who] crossed the line" and said that "they will be dismissed or retrained."

In PCCare247's view, it was simply a third-party tech support company that advertised on Google—and what was wrong with that? In a separate declaration, Vikas Agrawal added, "PCCare247 wants to be a good corporate citizen."