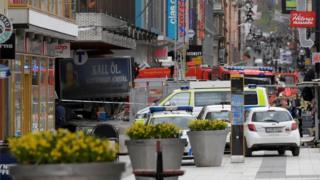 A lorry has smashed into a store in central Stockholm, killing at least three people, Swedish police say.

Several people were also injured in the incident on Drottninggatan (Queen Street), one of the city's major pedestrian streets.

Swedish Prime Minister Stefan Lofven said the country has been attacked and everything indicated that this was an act of terrorism.

One person has been arrested, he added, but gave no details.

The crash happened at the Ahlens department store just before 15:00 local time (13:00 GMT).

It is not clear whether the two incidents are connected.

Witnesses say the lorry drove into the front window of the Ahlens store.

Image caption Images showed the lorry having ploughed into the building

Are you in the area? Did you see what happened? If it is safe to do so, you can get in touch by emailing [email protected].

Please include a contact number if you are willing to speak to a BBC journalist. You can also contact us in the following ways: