What did the first animals look like? If you looked around at today's world, you probably guess something like a mammal or an insect: something with left-right symmetry and a centralized nervous system. But look a little further, and you get things like jellyfish, which are radially symmetric and have a decentralized nerve net. Look further still, and you get bizarre things like the Trichoplax, which don't have any visible nerve or muscle cells yet sense light and coordinate their movements. And then there are sponges, which clearly don't have anything nerve- or muscle-like, but these animals have many of the genes required to form key structures in the nervous system.

If you think this suggests that early animals started out simple and gradually evolved new features, and things like sponges branched off before they were added, you wouldn't be alone. Over the years, lots of researchers argued the same thing. But a recent genome sequence indicated that the oldest branch of the animal family tree that led to the comb jellies, with muscles, nerves, and tentacles, were an older branch than sponges. Now with a new paper on the comb jelly, researchers are starting to argue over what this actually tells us about the earliest animals. 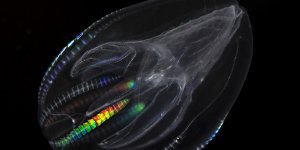 The comb jelly genome is in, nerves are common, and muscles were invented twice.

The arguments started with the publication of the first comb jelly genome, which helped establish them as the earliest branch. The authors of that paper suggested that this indicated that the earliest animals came fully equipped with muscles and nerves, which implies sponges lost both of these structures. In this view, the genes sponges possess that are similar to those used in nerves aren't hints of the assembly of a nervous system; instead they're remnants of structures that are no longer made.

The new paper describes the genome of a different comb jelly (there are 150 species of them, collectively termed ctenophores), the whimsically named Pacific sea gooseberry (Pleurobrachia bachei). And its authors claim that the idea of sponges losing their nervous system has it all wrong. Instead, nerves evolved twice.

That's a pretty radical proposition. Truly novel features don't come along that often in evolution; it's far more common to see an existing feature repurposed in novel ways. So if people see something like a specialized nerve cell in a large group of species, they tend to assume it first evolved in the common ancestor. This is especially true when, as is the case with nerve cells, the structure, function, and use are all so similar in every species that has them.

But in this case, the genome makes a case that, despite superficial similarities, the activities of ctenophore nerve cells are different. Based on the genes present, "ctenophores do not use serotonin, acetylcholine, dopamine, noradrenaline, adrenaline, octopamine, histamine, or glycine"—almost the full complement of molecules that nerve cells use to talk to each other in other animals. The only known neurotransmitter they find is glutamate (and they did a quick scan in 10 other species just to make sure they weren't missing any genes). So pretty much by necessity, the nervous system has to act differently.

The genome contains a variety of other indictions that comb jellies are exceptional. Most of the innate immune system, which broadly recognizes pathogens like bacteria and viruses, is missing. So is the machinery that processes micro RNAs, which are used to control the expression of other genes. Key regulators of development, like hedgehog and JAK/STAT proteins, are also absent. So are key genes involved in the formation of muscles, suggesting that these, too, may be have evolved separately in the ctenophores.

What all this leaves us with is a genuine scientific controversy. With the current state of knowledge, it's possible for people to have very informed, yet very different, opinions for what this means about the origin of animals. But there's simply not enough information for a strong consensus to form.

Fortunately, there are a number of ways to fill out the information we have. There are some indications that ctenophores can be traced back to the Ediacaran fauna, an odd collection of frond-covered creatures that predate the explosion of more familiar animal forms in the Cambrian. Pursuing this connection could provide some clarity. There's also the potential to study the nerves of living comb jellies to determine precisely how much they differ from those of other animals; the same applies to their muscles.

With more information, we might be able to get a clear picture of what the Earth's first animals looked like. Until then, however, we've got a mystery on our hands.