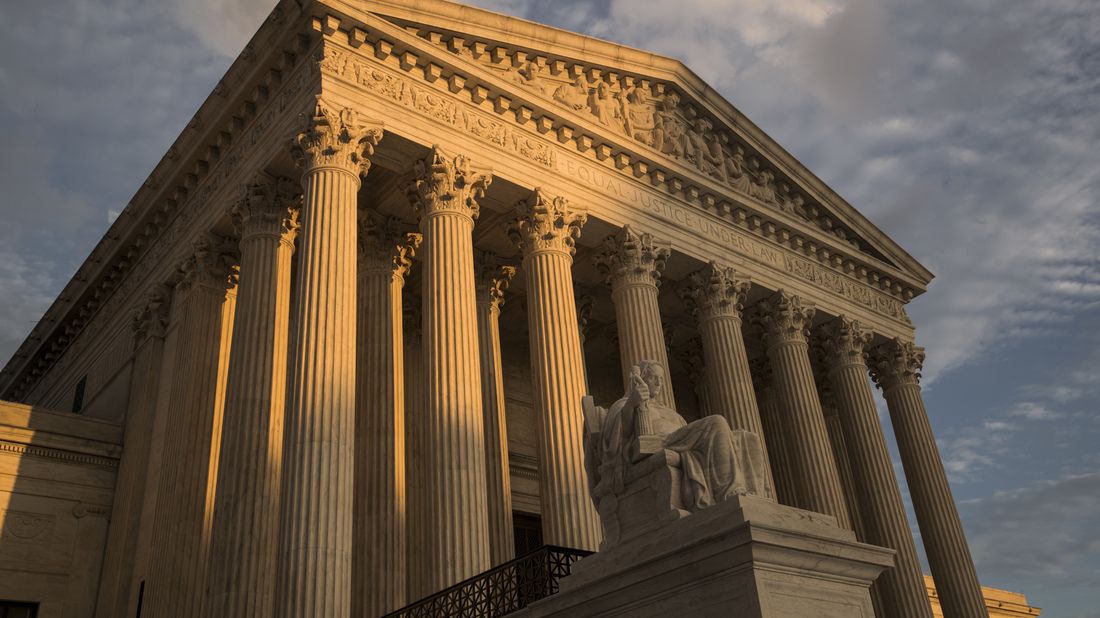 The Supreme Court on Monday punted on the merits of partisan gerrymandering. The decision could make it more difficult for challengers of the practice to bring cases in the future.

The Supreme Court essentially punted on extreme partisan gerrymandering Monday, declining to address the central questions at the heart of whether the practice is constitutional.

The court took up two cases, one out of Wisconsin and one out of Maryland, with lines drawn by both parties.

It issued one decision Monday, combining the two cases, and declared that the plaintiffs in Wisconsin don't have standing to sue, because they didn't try to prove that their vote had been diluted in their own district.

In Maryland, the court declined to engage on the merits of the case. The lower court, it said, was right in leaving the current system in place.

In many ways, this is a win for those who wish to leave partisan gerrymandering in place, because this decision likely makes it harder for groups opposed to the practice to bring such a case in the future.

Justice Elena Kagan filed a concurring opinion, however, that liberals may look to figure out a roadmap for how to bring a future case, as those opposed to partisan gerrymandering are sure to regroup.

"Partisan gerrymandering, as this Court has recognized, is 'incompatible with democratic principles,'" Kagan wrote, adding, "More effectively every day, that practice enables politicians to entrench themselves in power against the people's will. And only the courts can do anything to remedy the problem, because gerrymanders benefit those who control the political branches."

Kagan's concurrence was signed by the court's other three liberals, and cites Justice Anthony Kennedy, and it appears Kennedy remains the potential swing vote on the merits of partisan gerrymandering.

That's if Kennedy remains on the court, and, for now, the status quo remains in place.

Many court commentators guessed that the court took both Gill v. Whitford, a Republican gerrymander, and Benisek v. Lamone, a Democratic gerrymander in order to appear bipartisan in issuing a decision on partisan gerrymandering — the practice of drawing legislative and congressional district lines to maximize and perpetuate the power of an incumbent political party.

Act I opened the first week in October when the nine justices heard arguments in the Wisconsin Republican gerrymander, a design that delivered nearly two-thirds of the districts to the GOP even as Republicans lost the statewide vote.

Indeed, a year after the redistricting, Republicans captured only a minority of the statewide vote — 48.6 percent — but, as they had privately predicted, they still won 60 of the 99 state legislative seats, while the Democrats, who had won a majority of the vote, captured a mere 39 seats.

A divided federal court later found that Republicans, using high-speed computer technology along with new voter data, were able to draw new district lines to solidify their control of the Legislature for at least the rest of the decade, if not longer.

Act II took place in March when the court considered the Democratic gerrymander in Maryland. In that case Democrats only needed to move 10,000 people into the sixth district to comply with one person-one vote, but instead they shuffled 360,000 people out and brought 350,000 people in. The result was that the district went from 47% Republican and 36% Democratic to exactly the opposite.

The cases differed in a couple of ways: First, the Maryland challengers objected to only one district's design, while the Wisconsin challengers object to the whole state's redistricting. That said, drawing new lines for one district, would, of necessity, have ripple effects, changing the lines in others.

Another difference was the major legal argument. The Wisconsin challengers argued that extreme gerrymandering deprived Democratic Party voters of the equal protection of the law guaranteed by the Constitution, while the Maryland challengers contended that the gerrymander there deprived Republicans of their First Amendment rights by making their speech, their votes, less valuable.