But things began to change as the century drew to a close. Molitor was closed in 1989, after the city of Paris decided to replace it with a new housing development. The building was saved from destruction after protests from local associations, but it suffered from a lack of maintenance and soon fell into disrepair. Over time, it drew skateboarders and graffiti artists who transformed it into a cathedral of urban culture. The clean rows of cabins designed by architect Lucien Pollet were turned into spray-painted murals, and its Olympic-sized pools became center stage for raves and concerts.

Yet even in its decaying state, the building remained a historical monument, and locals still held hope for its revival. Those hopes finally came to fruition earlier this week, when the Piscine Molitor reopened as a new luxury hotel-club after nearly a decade of renovations. The new Molitor, inaugurated on Monday, is the result of an €80 million (about $109 million) project from French hotel group Accor, with financing from investment firm Colony Capital. Its designers aimed to breathe new life into the complex without losing its original Art Deco aesthetic. 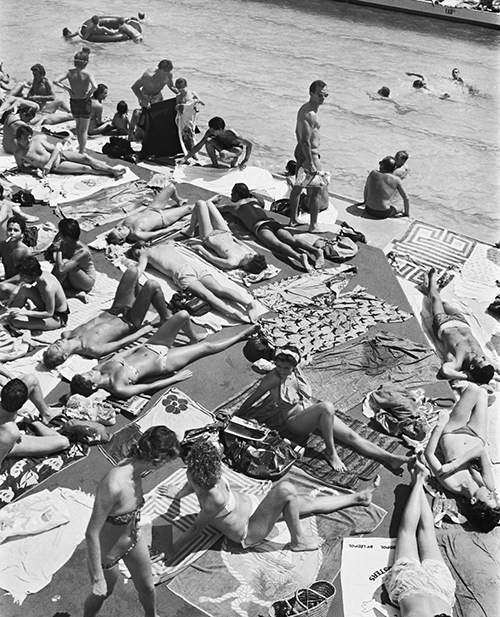 Much of the building's exterior had to be rebuilt — its south-facing side is all that remains of the original facade — but extensive work went into restoring its mosaics and stained-glass windows, and its central pool retains its original blue-yellow color scheme. Inside are 124 sleek hotel rooms, replete with modern furniture and espresso machines, as well as a spa, gym, and rooftop bar. In a nod to its more recent past, the venue will also host regular exhibitions from local artists. The goal, according to designer Jean-Philippe Nuel, was to create a visual narrative of Molitor's 85-year transformation.

"The approach was to look at the pool like a character with many histories, many cultures — a birth in 1929 and today, a certain maturity," says Nuel, who designed the interiors at the new Molitor. "The challenge was to connect these two points — its birth and current renaissance — with sometimes contradictory facets, like the 1930s windows next to a bomb of spray paint… Two worlds that have nothing to do with one another, and suddenly connecting them with a thread."

But some politicians have raised concerns over the pool's pricey entrance fees, which they fear will create a more stilted, exclusive atmosphere. Molitor was never free to the public, and its renovation was financed entirely with private funds, but entry fees were never as high as they are now. Just one day of swimming there now costs up to €180 (about $245), with annual membership fees of €3,300 ($4,500).

"I am not against the use of private capital," former socialist culture minister Jack Lang told Le Figaro this week. "But places must be open to a wider audience."

It's unlikely that the Piscine Molitor will ever recapture the spirit of its mid-century heyday, but those who remember it say they're glad it's back in use — if only as a temple of collective memory.

"There were divers, hair, and bare breasts everywhere. It was the era of pleasure pools."

"Children would do cannonballs, women would wear one-piece bathing suits and swim topless, you'd have a smoke after a swim, fingers still humid," recalls Gilles Rigoulet, a Paris-based photographer who shot a black-and-white series at Molitor during the 1980s. "Thirty years ago, in pools, the norms of security, hygiene, aesthetics weren't the same. There were divers, hair, and bare breasts everywhere. It was the era of pleasure pools."