At least 70 people have been killed in northern Syria after being exposed to a toxic gas that survivors said was dropped from warplanes, an attack that sparked comparisons to the most infamous act of the country's six-year war.

At least another 100 people were being treated in hospitals in Idlib province where the strike took place at dawn on Tuesday. Several dozen others were transferred to Turkey, some in critical condition.

Condemnation mounted throughout Tuesday as the US, Britain and EU blamed the Syrian government for the carnage, hours before the start of a donor conference on Syria in Brussels.

Donald Trump denounced the carnage as a "heinous" act that "cannot be ignored by the civilised world". But he also laid some of the responsibility on Barack Obama, saying in a statement that the attack was "a consequence of the past administration's weakness and irresolution".

Theresa May said she was appalled by reports of the attack and called for an investigation by the Organisation for the Prohibition of Chemical Weapons. "I'm very clear that there can be no future for Assad in a stable Syria which is representative of all the Syrian people and I call on all the third parties involved to ensure that we have a transition away from Assad. We cannot allow this suffering to continue," she said.

UK-based monitoring group the Syrian Observatory for Human Rights put the latest death toll in Khan Sheikhoun at 72 by Wednesday morning, including 20 children.

The Syrian military said it "categorically denied" responsibility. Russia, which has heavily backed the Syrian regime, said its planes were not operating near Idlib. Early on Wednesday, the Russian defence ministry claimed a Syrian airstrike had hit a "terrorist warehouse" containing an arsenal of "toxic substances" destined for fighters in Iraq. The ministry did not state if the attack was deliberate.

"No I think this [claim] is pretty fanciful, no doubt the Russians trying to protect their allies," he said. "Axiomatically, if you blow up sarin, you destroy it."

"It's very clear it's a sarin attack," he added. "The view that it's an al-Qaida or rebel stockpile of sarin that's been blown up in an explosion, I think is completely unsustainable and completely untrue."

Hours after the attack, a hospital treating the injured was also hit. Images taken inside the clinic appeared to depict the blast as it happened. Photographs and videos taken at the scene and in evacuation areas nearby showed rows of small, lifeless children, some with foam visible near their mouths.

Save the Children said at least 11 children were among the casualties.

Jerry Smith, the operations chief of the UN-led team that supervised the removal of Syria's sarin stockpiles following the gas attack on the rebel-held Ghouta area of Damascus four years ago, said: "This absolutely reeks of 2013 all over again." In that attack, more than 1,300 people were killed. The UN said the perpetrators probably had access to the stockpile of sarin held by the Syrian military at the time, as well as the expertise to use it.

A man carries the body of a child, after what rescue workers described as a suspected gas attack in the town of Khan Sheikhun. Photograph: Ammar Abdullah/Reuters

In the aftermath of the Ghouta massacre, a UN team supervised the surrender of Syria's sarin supplies, the removal of which was supposed to have been completed early in 2014. However, suspicions have remained that a portion of the stockpile was not declared to inspectors.

Tuesday's attack struck Khan Sheikhun, where there are thousands of refugees from the nearby province of Hama who have fled recent fighting. The town is also on a crossroads between Hama and Idlib and is considered vital to any regime offensive towards the northern city of Idlib.

"In this most recent attack, dozens of children suffocated to death while they slept," said Ahmad Tarakji, the head of the Syrian American Medical Society (Sams), which supports hospitals in opposition-controlled areas in Syria. "This should strike at the very core of our humanity. How much longer will the world fail to respond to these heinous crimes?" 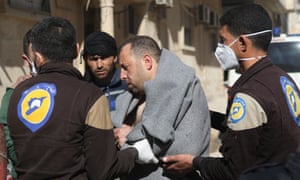 Sams said its doctors had determined that the symptoms of the patients were consistent with exposure to organic phosphorus compounds such as the nerve agent sarin, which is banned by the chemical weapons convention.

Smith said: "If you look at the footage itself, the victims don't have any physical trauma injuries. There is foaming and pinpointed pupils, in particular. This appears to be some kind of organo-phosphate poison. In theory, a nerve agent. What is striking is that it would appear to be more than chlorine. The toxicity of chlorine does not lend itself to the sort of injuries and numbers that we have seen."

Tuesday's strike came days after the US secretary of state, Rex Tillerson, said the Trump administration was no longer prioritising the removal of Assad, and that the Syrian people would ultimately decide his fate. 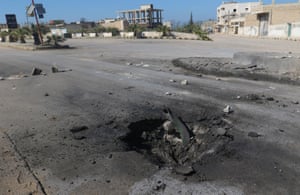 A crater is seen at the site of an airstrike. Photograph: Ammar Abdullah/Reuters

The US ambassador to the UN, Nikki Haley, made similar comments on Monday, affirming a shift in US policy that began under the Obama administration.

Critics of the stance have said that the absence of a credible threat has given the regime licence to commit war crimes with impunity as its backers, Iran and Russia, steadily claw back years of battlefield losses.

The UN security council said it would hold an emergency meeting on Wednesday to discuss the attack, after a request from Britain and France.

"Everyone is horrified and the children are in total shock," said Mohammad Hassoun, a spokesman for civil defence rescue workers in the nearby town of Sarmin, which received 14 of the wounded from Tuesday's attack. Hassoun said the victims were bleeding from the nose and mouth, had constricted irises and suffered from convulsions.

"The total number of wounded is incredible. So far it's over 200," said Mohammad, a doctor at another hospital in Idlib. "We received over 20 victims and most of them are children, and two of them in the ICU are extremely critical. There are a lot of injured." Mohammad said the victims he had seen were drifting in and out of consciousness. Many were on respirators.

Few hospitals in Idlib have the capacity to deal with the symptoms of chemical attacks due to the repeated bombing of medical facilities by forces loyal to the government and lack sufficient oxygen tanks to treat victims.

Idlib is one of the last bastions of rebel control in Syria, and has been subjected to a relentless campaign of aerial bombardment despite a supposed ceasefire brokered this year by Russia and Turkey that was aimed at paving the way for political negotiations.

The raid in Khan Sheikhun indicates Assad's growing confidence. He has wrested control of territory from the rebels, including the entire city of Aleppo, in recent months. His regime has benefited from the unflinching support of Moscow and Shia militias backed by Iran, as well as waning support for the opposition by its allies in the region and the new US administration. 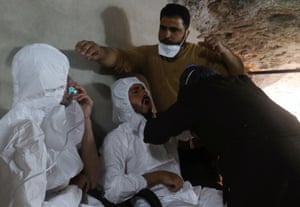 A man breathes through an oxygen mask as another receives treatment. Photograph: Ammar Abdullah/Reuters

The attack will refocus attention on the failure of the international community to prevent the worst abuses in Syria's war, and casts doubt on a signature achievement of Obama's government, which negotiated the presumed destruction of Assad's chemical arsenal in 2013.

That deal followed the sarin gas attack on Ghouta, which nearly prompted a US intervention in the conflict. Since then, chemical attacks have continued on a smaller scale, mostly deploying chlorine gas, which was not covered by the deal because it has industrial uses.

However, a similar devastating attack to the Idlib strike took place in east Hama last December, with at least 93 people dying and several hundred more being wounded after exposure to what local authorities described as a nerve agent. Western intelligence agencies believe sarin was used in that attack, but were unable to retrieve biological samples that could prove their fears.

Smith said the recovery of samples would be pivotal to the investigation of the Idlib strike. "It is one of the most important things now to get biological samples, interviews and environmental samples, ideally from witnesses who can also give statements," he said.