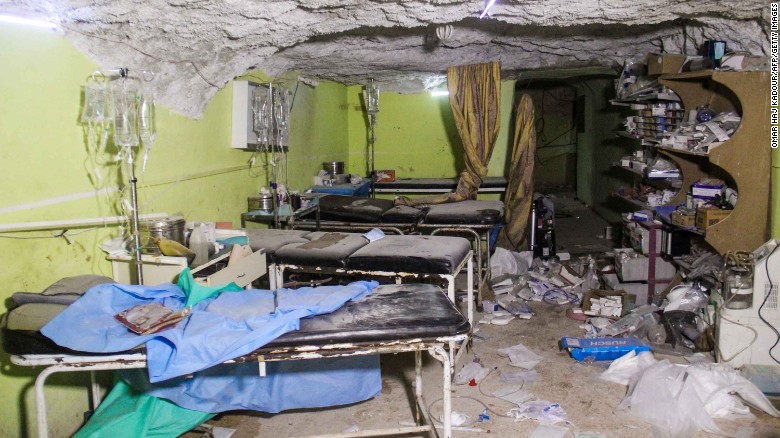 The Syrian city of Khan Sheikhoun — the site of Tuesday's chemical attack — was hit by airstrikes on Friday and Saturday, according to two activists in the city and regional activist groups.

At least one woman was killed and three other people injured in Saturday's strike, two activists in Khan Sheikhoun said.

It wasn't immediately clear who conducted Friday's and Saturday's strikes.

A Russian frigate armed with cruise missiles was heading to the Mediterranean in an apparent show of force a day after the first direct military strike by the US against the Syrian regime.

Russian state media reported that the frigate, the Admiral Grigorovich, would call at a logistics base at Tartus, Syria. Russia also pledged to help strengthen Syria's air defenses after the US strike on the Shayrat airbase in western Syria.

The White House late Friday refused to say whether strike was a one-off action or part of a new strategy designed to hobble the military capabilities of President Bashar al-Assad. Nor would it say whether the US believed Assad should step down after the chemical attack on Khan Sheikhoun that killed at least 80 people and injured dozens more on Tuesday.

US Secretary of State Rex Tillerson said he was "disappointed" but "not surprised" by Russia's condemnation of the strike as a violation of international law.

The state-run TASS news agency said the Russian frigate was heading for Syria after taking on supplies at the Black Sea port of Novorossi. Citing an unnamed military-diplomatic source, TASS said that its ongoing presence would depend on developments in the region but it was expected to remain in Syrian waters for more than a month.

The ship, equipped with state-of-the-art missiles, had been on exercises in the Black Sea.

"This is really just a show of force, flexing muscle, Russia doing what it can to remind everyone that for the last 18 months it has had quite a deployment in Syria and the region," CNN's senior international correspondent Paula Newton reported.

NATO called it one of the largest deployments from Russia in decades.

The White House refused to discuss next steps. Press Secretary Sean Spicer said President Donald Trump would not "telegraph his next move." Speaking to reporters at Trump's Mar-a-Lago resort in Florida, Spicer said the US missile attack was "very decisive, justified and proportional."

He declined to say whether Trump now believed Assad should relinquish power. "First and foremost the President believes that the Syrian government [and the] Assad regime should abide by the agreement they made not to use chemical weapons," Spicer said.

US officials have said the Pentagon is looking for any evidence that the Russian government knew about or was complicit in Tuesday's chemical attack.

A US military official told CNN the Pentagon was examining specifically whether a Russian warplane had bombed a hospital in Khan Sheikhoun five hours after the initial chemical attack, with the aim of destroying evidence.

A US defense official said intelligence indicated that a Russian drone flew over the hospital that was treating victims of the chemical attack, prior to the site being later bombed.

When CNN asked about US allegations that Russia might have been complicit, Kremlin spokesman Dmitry Peskov replied via text message: "That is not true."

Trump said he ordered the airstrike on the Shayrat base because the US believed aircraft that carried out the chemical attack were launched from there.

Russian President Vladimir Putin denounced the US strike as "act of aggression" and said it violated international law.

Tillerson said that he was "disappointed" but "not surprised" by Russia's response.

Russian Senator Alexey Pushkov said that the disappointment was "mutual" and suggested that Tillerson's comments were made to gain "leverage" in upcoming US-Russia talks. Tillerson is due to meet Russian Foreign Minister Sergey Lavrov in Moscow next week.

He said on Twitter that the "conditions for negotiations in Moscow were even worse than (former Secretary of State John) Kerry's times."

US Ambassador to the United Nations Nikki Haley warned Friday that the United States "is prepared to do more" in response to Syria's use of chemical weapons and delivered a sharp rebuke to Russia for its support of the Syrian regime.

"Every time Assad has crossed the line of human decency, Russia has stood beside him," Haley told the council. Russia "bears considerable responsibility" for Assad's use of chemical weapons, she said.

The decision to strike the Shayrat airbase has "changed the whole situation on the ground," said CNN military analyst Rick Francona.

"The US and Russia were beginning to cooperate. There were low levels of cooperation ongoing already with … additional cooperation in the north, going after ISIS and this was good, a very positive development.

"Now we see this changing because of this one airstrike."

Assad said the United States had carried out an "unjust and unabashed assault" against Syria which "shows nothing but short-sightedness, a narrowness of vision and a blindness to political and military realities."

He also said the attack had increased the regime's resolve to "crush" terrorists in Syria — the term it uses for all opposition forces.

The operation "makes the United States of America a partner of ISIS, Nusra Front and other terrorist organizations who — since the first day of this unjust war on Syria — have been attacking Syrian army positions and Syrian military bases."

Maj. Issam al-Reis, spokesman for the opposition Free Syrian Army's Southern Front, welcomed the US action and called for "the destruction of all tools of murder that Bashar al Assad's regime uses."