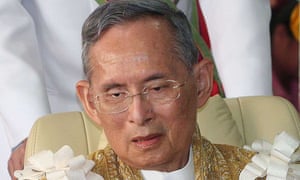 Thailand's King Bhumibol Adulyadej has died aged 88, ending seven decades on the throne, the palace has said in a statement.

King Bhumibol became a unifying father figure and rare source of stability for a nation that has weathered more than a dozen coups since he came to power in 1946 aged just 18.

But the constitutional monarch has been absent from public life for years and his death throws an already politically turbulent Thailand into a haze of uncertainty that is unprecedented in its modern history.

Most Thais have only known King Bhumibol on the throne and his influence has superseded that of bickering politicians since the closing days of the second world war.

During the king's rule, there have been close to 20 attempted or successful coups - the last one in May 2014 when a military junta seized power - but the monarchy has remained revered. 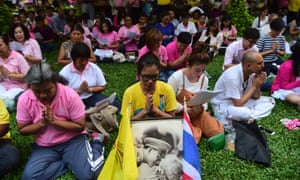 That Thailand's many civilian and military leaders have crawled on the floor in the presence of the king illustrates how Bhumibol has kept the executive in check even as the country is ostensibly in a constant state of flux.

His constant presence has made Thailand one of the most widely cited development successes, becoming an upper-income country in less than a generation.

He has successfully negotiated many times with military leaders to return democracy to the country, but finally leaves Thailand to the army.

Critics of the military junta says it used its support for the monarchy as a pretext for grabbing power from the elected government of Yingluck Shinawatra, the sister of Thaksin Shinawatra, who was also deposed by the military in 2006 and fled the country. 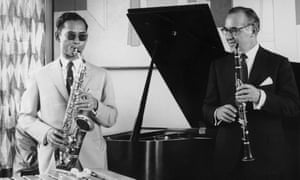 King Bhumibol had been treated by doctors for "water on the brain" and a chest infection in August 2015. On Sunday, the palace said his condition had become unstable.

During the closing years of his life, he was mostly hidden from the public, occasionally wheeled out on a bespoke sandy-coloured chair to tour a new supermarket or visit a palace. During these outings, Thais kneeled on the road, some crying as their expressionless and silent monarch passed by.

His wife, Queen Sirikit, has also suffered declining health. They have three children, but their only son and heir, Crown Prince Maha Vajiralongkorn, does not command the same affection as his father, causing fears of a rupture in the state's structure.

However, open discussion of the monarchy is restricted by a strict lèse-majesté law that makes criticism of the royal family punishable by years in jail, so it is hard to gauge the popularity of the son. Any Thai can bring a legal case against a person under the lèse-majesté law. In 2014, complaints were filed against a woman who wore black on the king's birthday.

In August last year, military courts jailed two people under the law, one for 30 years and the other for 28 years, the heaviest sentences for the crime in the country's history, for Facebook posts.

Critics of the law say it has been used by the military against political opponents.

The king ascended to the throne after the still unexplained death of his older brother, Ananda Mahidol. His brother, also known as King Rama VIII of Siam, was found shot dead in his bedroom in the Boromphiman Throne Hall in the Grand Palace. Bhumibol later said "it was proved that it was not an accident or a suicide".

Bhumibol postponed his coronation until 1950 to finish his studies in Switzerland.

Many of his subjects regarded the king as close to divine. His image is displayed in shops, restaurants and homes across the country. The royal anthem is played in cinemas before films are shown and people are expected to stand. The anthem is also frequently broadcast in parks and on the metro, causing a temporary standstill.

The king played the saxophone and loved jazz. He was rarely seen in pictures without a camera around his neck and was a fan of black and white photography, which many suggest stemmed from his preference for simplicity in life.