Humor in the Trump Age

The Anger-Fueled, Social-Media-Driven World of Humor in the Trump Age

George Carlin. Lenny Bruce. That dog puppet. We've always had comedians zinging truth to power. ("Suppose you were an idiot, and suppose you were a member of Congress. But I repeat myself," Mark Twain quipped in 1881.) But today it's getting hard to tell where politics ends and comedy begins. The change started with Jon Stewart and The Daily Show, which made even sitting presidents want in on the joke. Now we have politicians yukking it up everywhere from The Tonight Show and Saturday Night Live to Funny or Die's absurd Between Two Ferns. Along the way we've had comedians become politicians (hi, Al Franken) and politicians throw stand-up into their stump speeches. (Have you heard the one about the salmon?) Comedy is now politics. Politics is comedy. And with our new president, not all of it is exactly funny. 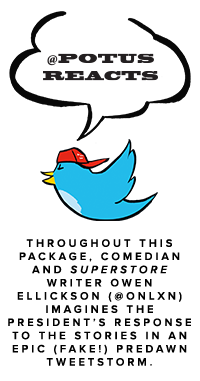 It's no coincidence this evolution has coincided with the rise of social media. The only thing that can accelerate a topic online better than outrage is humor—combine the two and you have a potent tool for reaching millions. (Hell, even protest signs—"We shall overcomb"—spawn top-10 lists.) No wonder, as the divisiveness between Americans goes supernova, the savagely shareable, politically charged burn has become our dominant lingua franca.

But do the jokes, parodies, and 140-character barbs make a difference? Has comedy taken an all-new LOL-shaped role in molding public opinion, or is it just another layer reinforcing our filter bubbles? Is it challenging power or just making us smug? And, as all humor becomes political, is politics warping comedy? One thing's for sure: The knives are out and they are sharp. Nobody wants to hear "What's the deal with cheese?" jokes anymore. Comedy today is either a weapon or a source of catharsis.

Maybe we need it to be both. When we have a president who talks about Frederick Douglass as though he's still alive and uses Twitter to bully both the judiciary and Nordstrom (sad!); when we have online right-wing mobs that blur the line between irony and hate, destroying civil discourse just for the lulz; when we have a splintered left that's so bent on being offended that it manages to riot against free speech—what's not to laugh at?

Inside the anger-fueled, social-media-driven world of comedy in the Trump age.

This article appears in the April issue. Subscribe now.