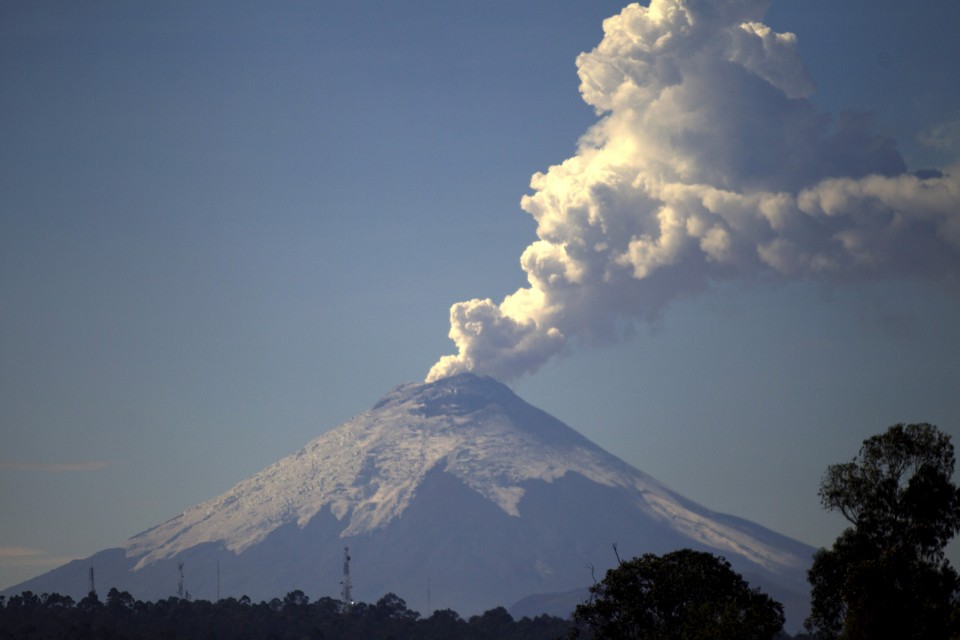 The Cotopaxi Volcano, one of the world's highest active volcanoes in Ecuador

SAN RAFAEL, ECUADOR—In April 2015, a volcano in Ecuador awoke from its restless slumber. The mountain shook with hundreds of earthquakes, and a thin tendril of steam escaped from Cotopaxi's core. Each day, locals could see smoke and ash spiraling above the peak as seismic activity ramped up.

In June, Ana Isabel Jácome Rosenfeld returned to her hometown of San Rafael in the shadow of Cotopaxi, after completing a doctoral fellowship in the United States. She immediately began reading about the volcanic activity, and what she learned terrified her.

"I called my mom and said, 'Hey, we're fucked,'" Jácome said. She shared what she had read: this spiral of smoke was only a sign of more activity to come—and the previous five major eruptions had been fatal for those who lived nearby. Word quickly spread among their neighbors in San Rafael.

"We had nightmares and couldn't sleep," she said. "I would wake up at 4 in the morning because of the sulfur smell."

"Nobody was sleeping, everyone was freaking out."

When the spiral of steam erupted into a dense cloud of smoke and ash on August 14, thousands of people fled the area around the volcano for safer ground. No lava bubbled up from the peak; no lahar—a deadly avalanche of melted snow and mud—flooded the mountainsides. But those in Cotopaxi's shadow feared this escalation of activity could mean the Big One was soon to come.

After weeks of waiting, many cautiously returned to their abandoned homes and lives. But the fear didn't end with that eruption in August. Cotopaxi continued to spit ash and to rumble with dozens of small explosions. It was obvious the volcano was merely warming up. When would it finally blow—and would those in its path have time to escape?

"We were having the signs of acute stress," Ana Jácome said. "Nobody was sleeping, everyone was freaking out." Her mother eventually went on antidepressants; Jácome, who was pregnant, moved 20 miles away to Quito for the duration of her pregnancy.

Although experts don't know when Cotopaxi will erupt again, they believe it will—and that the next time will be much worse. But what those experts can't say is when the disaster will happen. It could be a month from now; it could be in a decade, or even longer.

"Of the five eruptive periods from 1532 to now—and this is number six—it always ends (or at least has) in a major eruption," said Patricia Mothes, a volcanologist with the Instituto Geofísico.

What Mothes calls a "major eruption" would produce more than 100 million cubic meters of ash—a column at least 12 miles high. In such an event, more than 200,000 people in Cotopaxi's shadow alone would be directly or moderately affected. Roads would flood, clean water would become scarce, electricity wouldn't work, homes and cars would suffer damage. Thirty miles away, Quito would be coated in ash, and air traffic for hundreds of miles would grind to a halt.

Each town on Cotopaxi's slopes received a map of the risk zones, shaded red, pink, and orange. Those in the red zone, closest to the volcano's mouth, would need to flee in the event of a major eruption—but some would inevitably be stranded. Not everyone living on Cotopaxi's slopes has access to a vehicle or, for that matter, another place to stay.

"There are a lot of people just kinda left out," Mothes said of this scenario. "They have to hunker down under a wood table."

But even while Cotopaxi bides its time for its big finale, residents have already had their lives disrupted by the smaller explosions.

"All of the communities have already had ash fall," Mothes said. "Their livestock [have been] affected by the ash fall."

As residents around Cotopaxi uneasily returned to their daily lives, the cloud of potential catastrophe hung over them. The danger shifted to a quieter and more insidious threat: mental health. Those within Cotopaxi's risk zone soon began showing signs of depression, anxiety, and even PTSD—sleeplessness, bouts of crying, and episodes of bad temper, said Sandy Ordonez, a psychologist working in a school near the red zone.

"We feel fear because we do not know what will happen and how we can take care of ourselves and our students," she wrote in Spanish.

"It was a huge traumatic event for many people," said Theofilos Toulkeridis, a member of the Research Group of Internal and External Geodynamics at Quito's Universidad de las Fuerzas Armadas ESPE. "The people are still traumatized."

One common approach in disaster zones is to deploy psychologists to help people process the anxiety and trauma. But, Toulkeridis said, that's not happening.

"Not at all, not at all," he said. "People are not even aware from the governance side or from the Ministry of Health that people need this kind of support." Toulkeridis pointed out that the WHO and other organizations offer free materials on how to deal with the trauma of natural disasters. Yet, he said, "Nothing of that has been applied."

Part of the problem was the restriction on information when the volcano first began showing signs of activity. The government declared a 60-day state of emergency. The press was forbidden from reporting on Cotopaxi's activity without authorization from the government, and rumors quickly began flying that the government was hiding the true extent of the looming disaster.

"The people did not get any information," Toulkeridis said. "People got panicked." In the flurry of misinformation or no information, many moved out of Cotopaxi's danger zone. 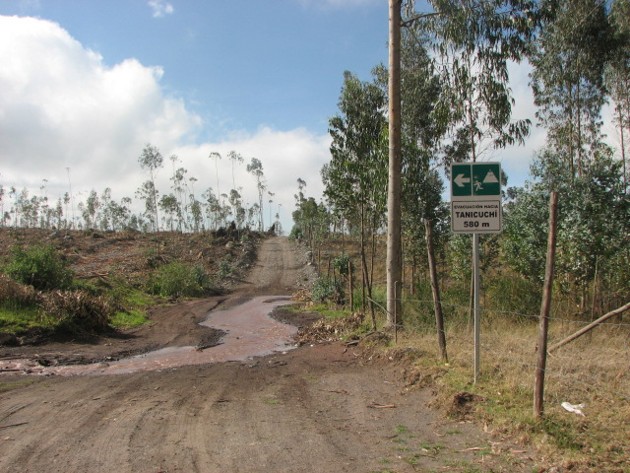 As Cotopaxi heats up with the volcanic activity, melt
ed snow and mud stream down its
slopes.
(Melody Schreiber)

"People got left behind," he said. "People went bankrupt because there was no one to buy from their shops." Many residents living in the red zone sold their houses for just a fraction of what they paid, he said—"for the price of the thief, as they say." Others simply abandoned their homes and property.

Yet when the volcano does have a major eruption, Toulkeridis believes the government will be able to keep villages and cities safe by blocking and diverting the deadly flow of lahar somehow. But he understands the fear around Cotopaxi's destructive power.

"Cotopaxi has fame," he said. "It's the most feared volcano in Ecuador. People get anxious."

When a natural disaster occurs, it's common for many of those who have been directly affected to experience an emotional and physical fallout—headaches, stomachaches, sleepless, and a range of emotions from helplessness to anger.

For a one-time natural disaster, Halpern and Vermeulen estimate that 5 percent of those exposed to the trauma may suffer PTSD; for a terrorist attack, that rate could rise as high as 20 percent. Disaster survivors may also face clinical depression and anxiety.

It's important to provide a sense of safety, the psychologists say, so those affected may move past the distress.

"At the end," Halpern says, "that's where the healing begins."

However, for those living in the long shadow of potential crisis, it can be difficult to move on.

"They need to be scared a little—but only moderately."

"If the disaster is ongoing, the healing is much more complicated," Halpern adds. "At the end of a shooting, people want to know you got the shooter, or else you're not safe."

"Psychologically, we're pretty good at adapting and adjusting when something has happened and it's over," Vermeulen says. "It is much harder to exist in that state of ongoing anxiety and stress, not knowing what the full extent of the damage is going to be." Halpern calls it "anticipatory anxiety."

"It's a bit of a double-edged sword," Vermeulen says. Knowing in advance that a disaster might strike allows residents to prepare their homes and minds for the oncoming blow. But it may also inspire daily fear and stress.

Balance, Halpern says, is difficult to achieve. "They need to be scared a little—but only moderately," he says. Those in the path of an impending disaster need to plan evacuation routes and emergency meeting places, but they also need to live their lives.

One key to living a cautious but balanced life in a potential disaster zone is having access to reliable, trustworthy information; another is trusting the authorities to prioritize their safety and well-being. 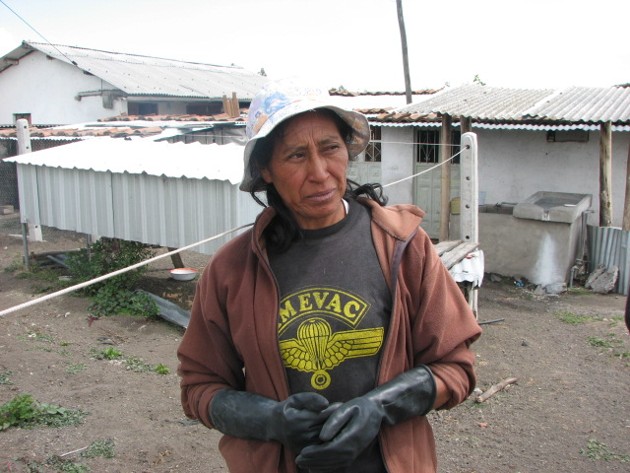 Imelda Romero, a farmer near the town of San Ramon, worries that she and her elderly parents will not have the time or resources to evacuate in the face of a major eruption. Her crops and livestock have already been affected by ash fall from the nearby volcano.
(Melody Schreiber)

"If they feel abandoned by their government, by response professionals, that is a compounder to stress," Vermeulen says. "At every stage of disasters, people are desperate to know what is happening," she continues. Clamping down on information and not countering rumors with accurate info, she adds, is "exactly what not to do."

In the U.S., traumatic events like 9/11 and Hurricane Katrina greatly reduced the stigma of disaster-related mental-health issues and emergency responders began to recognize the importance of checking on people's psychological states in the aftermath of a tragedy.

But many emergency managers have other priorities—especially when the calamity hasn't even struck yet. Halpern and Vermeulen understand better than most the strain under which emergency managers and responders operate; they are often faced with impossible decisions and a lack of resources, and many suffer from their own disaster distress.

However, they point out, responding with psychological first aid and then follow-up care can be an important stepping-stone in helping communities recover and rebuild.

"The sooner you can get people functioning again, the sooner they take their own recovery over," Vermeulen says. "They take it into their own hands."

Both psychologists highlight the importance of banding together as a community in order to prepare for and move past a disaster of any duration.

"It would be so important in Ecuador that community members know how to help each other," Halpern says.

Ana Jácome in San Rafael was frustrated at the lack of information around Cotopaxi's anticipated eruption. After the volcano awoke, she started a Facebook group where friends and neighbors could take shifts monitoring the seismograph.

"There was no alarm system," she said. "We were on our own."

She began employing what she called "the ideal of argumentative democracy." She helped organize meetings with the Instituto Geofísico, which monitors volcanic activity and releases updates and alerts about potential threats.

"We needed signaling of where to run," Jácome said. "We had absolutely nothing."

Jácome and her neighbors also began petitioning the local government to install an early alarm system. Previously, San Rafael had worked on an ersatz system found in many high-risk towns around Cotopaxi: a neighborhood-watch style of disaster warning that included radios, old-fashioned whistles, and door-to-door warnings.

At first, Jácome said, officials responded to the community's petitioning by buying an inefficient alarm system that took 12 minutes just to activate the sirens—but residents knew that once the lahar began flowing, they would only have 30 minutes to run. Later, after increased pressure from the community, they upgraded to a more efficient system.

"I don't have to dream about the whistles anymore," Jácome said.

For now, drills and tests indicate the alarm system seems to be working. Jácome found some solace in seeing the fruits of her action—something she could do to relieve some of the fear and anxiety building in her community.

"I hope it works," Jácome said.