The spring of 2008 was a grim time for the U.S. military in Baghdad. Not least among the problems were rockets raining down on the Green Zone, which housed government offices and foreign embassies, from a suburb of the Iraqi capital called Sadr City. American forces fought back and captured launch locations, but the missiles kept falling.

That's when the military opted for a strategy that would resonate, years later, with the border-control philosophy of President Donald Trump: building a big wall.

In just six weeks, U.S. and Iraqi soldiers placed 3,000 precast concrete slabs, each standing 12 feet high and weighing about 9 tons, to block enemy fighters from important positions. It wasn't easy. The militia tried to disrupt the construction with improvised explosive devices and snipers, according to a paper published by the Rand Corp. Gunmen routinely took aim at personnel who had the unenviable job of climbing to the top of the barriers and freeing each concrete slab from the cables of construction cranes. But the wall went up quickly, and the missiles stopped.

The military's wall-building experience is relevant now because the U.S. government, as you may have heard, has solicited bids to build another wall, and the bids are due today. The request for proposals describes something similar to the wall built in and around Baghdad. Specifically, U.S. Customs and Border Protection has told interested builders it wants at least an 18-foot wall stretching across the nation's 1,933-mile southern border.

The government initially called for a 30-foot-tall wall but later said it would consider designs of at least 18 feet.


The design must be impervious to attempts to climb over top or tunnel underneath and should also be "aesthetically pleasing" when viewed from the U.S. side.

The initial requests for proposals are part of a short-term effort to prototype design concepts, explained Carlos Diaz, a spokesman for Customs and Border Protection. The ongoing procurement process isn't intended as a vehicle to hire private contractors for the border-length wall.

More than 700 companies registered interest in the project. Private contractors who make the first cut after Wednesday's bids will be asked to build 10-foot-tall prototypes and then submit more details in early May. But this search for private-sector builders raises an interesting question: Why not turn to battle-tested wall-building experts who are already federal employees? 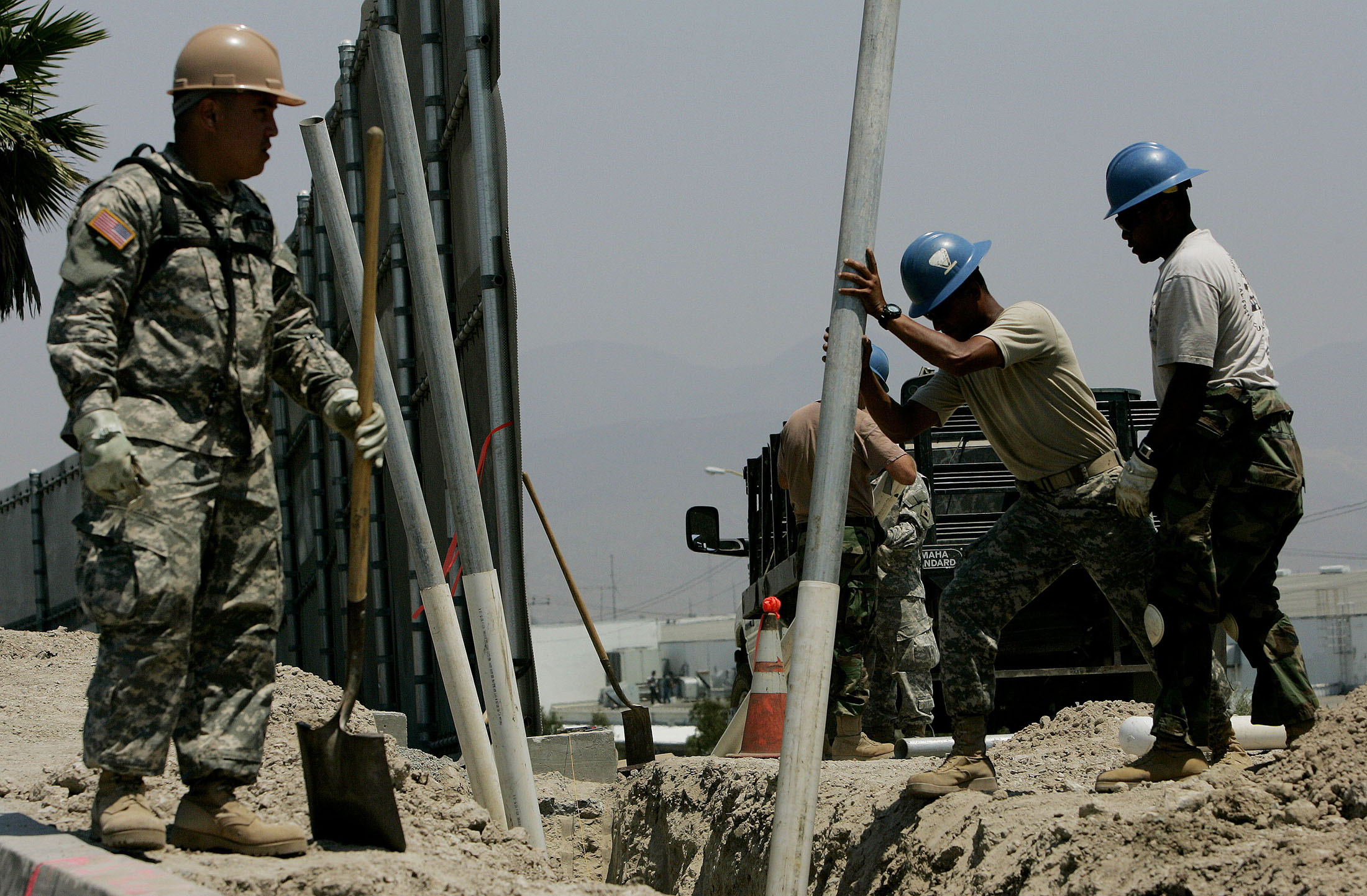 Members of the California National Guard prepare to build a fence along the U.S.-Mexico border in Otay Mesa, Calif., on July 25, 2006.

No one expects the military to build Trump's border wall. Still, U.S. armed forces would almost certainly offer significant savings on what will likely be a cost-sensitive project. Estimates have run as low as $8 billion to as much as $25 billion and more—though it's hard to put a solid fix on the cost without knowing more about the final design or how much Congress will allocate for the job.

The U.S. has been contemplating barriers along the Mexican border for a century but didn't take a comprehensive approach until the Secure Fence Act was signed into law by President George W. Bush in 2006. In the early years of the initiative to build hundreds of miles of fencing along the border, the government often used border patrol agents or Department of Defense personnel to handle construction. The National Guard, for instance, built fences and installed cameras along the California border. That effort was hailed as a two-birds-one-stone strategy: The Pentagon used the project as "part of their training regimen," according to a 2009 report from the Congressional Research Service, and taxpayers saved on the cost of hiring private-sector construction workers.

Toward the end of the Bush administration, however, the Department of Homeland Security decided to take fence construction private. That move freed border patrol and military personnel to return to other duties—but at a steep price. Initial estimates indicated that "construction costs could increase by about four times due to use of commercial labor instead of military labor," according to a 2009 report by the inspector general for Homeland Security.

"The military would have been cheaper," said Konstantin Kakaes, a fellow at New America, a Washington-based think thank, citing the government reports on the Bush-era border fence. "They didn't use the military because of time pressure." In other words, National Guard personnel are great wall builders—until they need to be deployed somewhere else.

There's another potential problem with assigning construction of the wall to military builders. While the Army Corps of Engineers has extensive experience overseeing large construction projects at home, including hydroelectric plants and canals, the length of the U.S.-Mexico border is well beyond the typical scale. It would be hard to frame Trump's grand border project as a training exercise in the construction of tactical infrastructure.

It took the U.S. Army 30 days to build 2.9 miles of barriers in Sadr City. At that pace it would take more than 55 years to span America's southern border. Then again, Trump's wall builders on a peaceful border are unlikely to have anyone shooting at them.