Last summer, Colleen Boll was doing some work around the house when she heard her dog barking from a different room. "It was an interesting kind of bark," she says, "so I looked out." Right smack in her yard, pacing around inside her chain link fence, was an enormous, glossy black bear.

Boll watched the bear puzzle out how to hop the fence. "Eventually, it grabs the trunk of a tree and climbs over," she remembers. "And I see the pipe at the top of the chain link fence bend way down under the weight of this huge bear. And then I realize, oh—that's what all those little bends are, in all my fences all around my house."

Boll doesn't live deep in the woods. She lives in Asheville, the 11th most populous city in North Carolina, and increasingly well-known as both a hip travel destination and a great place to live. Over the past decade, Asheville has racked up all kinds of accolades: according to one list of fawning headlines, it's "Fantastically Yoga-Friendly," "One of America's 12 Greatest Music Cities," "The Biggest Little Culinary Capital in America," "#1 Beer City USA," and "America's #1 Quirkiest Town." 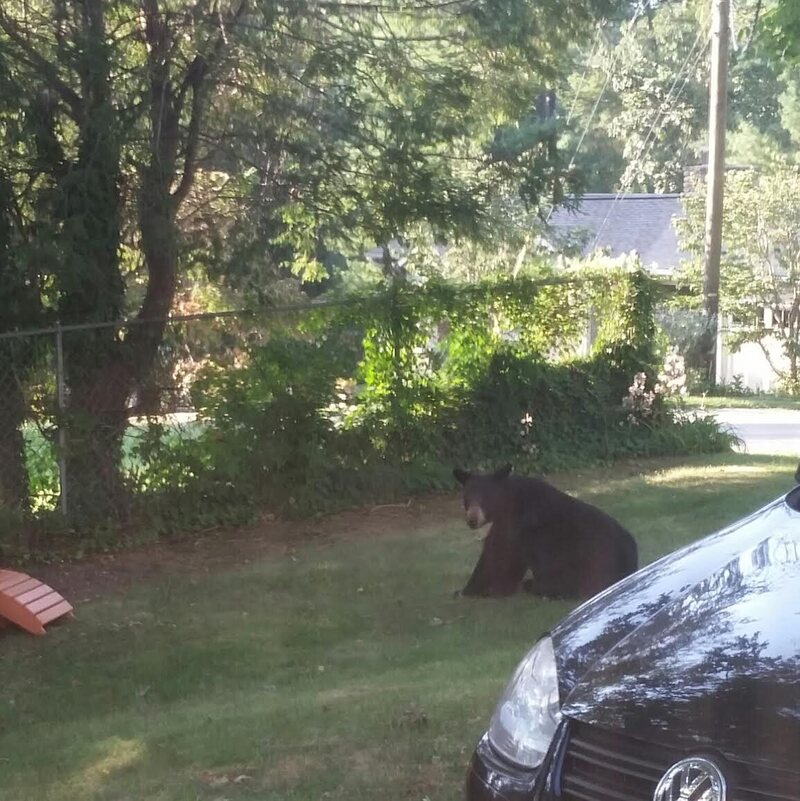 Somewhat more quietly, it's also one of America's Best Cities for Bears. They hang out near the local hospital, and at the storied Grove Park Inn. Mailmen regularly run into them on their routes. Last August, a bear broke into an Asheville man's home and stole a stick of butter out of his kitchen trash. As part of its pre-show, the Fine Arts Movie Theater, in downtown, shows a photo of a curious black bear reading its marquee from across the street. "I never saw a black bear until I moved to the city," Boll says. "Now, I'll be driving and I'll go, 'There's a bear in someone's yard!' or 'Look at that bear, knocking over that trash can and taking the bag!'"

When we talk about urban wildlife, we're usually referring to small, deft creatures—squirrels, pigeons, or other standbys that mind their own business and fade into the background. Your average city-dweller might catch a deer in their headlights every once in a while, or spot a raccoon digging through the trash. A bear is something of a different story. A male can weigh 600 pounds. That's not the kind of creature you get used to seeing on your commute.

Somewhere around 8,000 black bears range around western North Carolina, and many of those make Asheville itself part of their meandering. According to the Urban-Suburban Bear Study, an ongoing project by the state's Wildlife Resources Commission and North Carolina State University, these bears are very healthy, often well-fed enough to have twice as many cubs as your average scrappy mountain bear, and confident enough to den right outside of town.

After a couple of years of study, the researchers—along with most of Asheville's humans—are wondering exactly how many bears the city can hold.

Black bears and North Carolinians have tussled over space for centuries. While traveling through the western part of the state in 1774, naturalist William Bartram complained about them in his journal, writing "the bears are yet too numerous." American pioneers hunted them for food and for sport, often to excess—when trapper "Big Tom" Wilson died in Asheville in 1908, his obituary bragged that he had killed 110 bears (his son, Adolph, claimed 90). All of this barely dented their numbers.

Starting in the 1920s, though, development and deforestation began taking their toll. When a midcentury bout of chestnut blight came along and decimated the bears' food supply, they were already struggling. By 1970, there were only about 1,500 bears left in the state, and North Carolina conservationists began setting aside protected land to try and bring their numbers up. The species began a slow recovery, but things still looked grim. "People wondered if they would disappear," Mike Carraway, a biologist with the North Carolina Wildlife Resources Commission, told the Asheville Citizen-Times in 2014.

Then came the 1990s, and the housing boom. New developments meant more room for people—but, as residents and scientists soon learned, they were also perfect safe spaces for bears, full of food and birdseed and free from hunters. As Asheville grew into a thriving metropolis, the bears stuck around and thrived, too, lumbering between the sprawling Smokey Mountains and the cramped yet trash-rich developments. In 1993, the Wildlife Resources Commission got 33 calls about human-bear encounters. In 2013, they got 569. 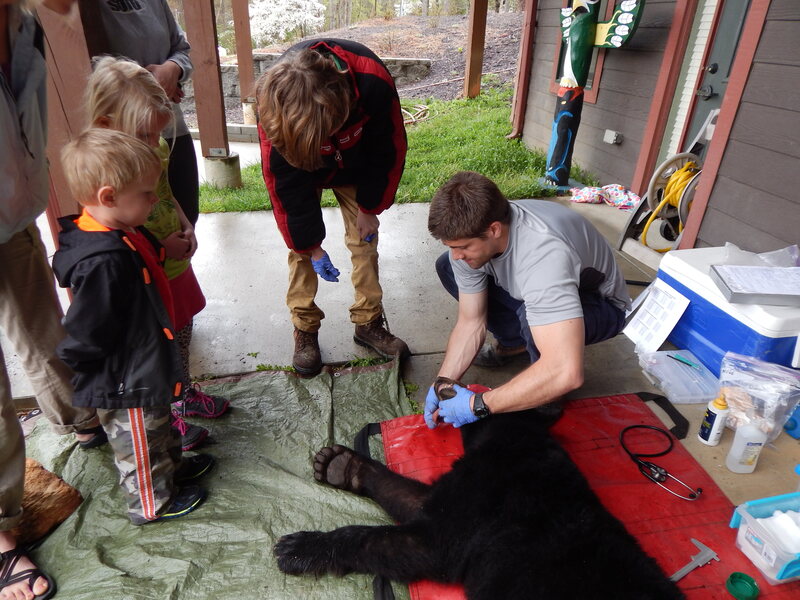 The scientists behind the Urban-Suburban Bear Study are looking at this influx from a number of angles, investigating the bear's lifestyles, travel routes, and family relationships. But they're also interested in figuring out this new habitat's "social carrying capacity"—in other words, exactly how many of these new neighbors the human residents of the city are willing to tolerate. "If the habitat can support a lot, but the public doesn't want them, we run into issues," says Dr. Chris DePerno, the study's principal investigator.

The very design of the study requires a certain amount of public support. Residents throughout the city have volunteered to host humane traps on their property. When a bear wanders in, scientists come by, attach a GPS collar, and then let the bear go. They then track the bear's movements for six months, at which point the collar automatically falls off. If they couldn't use people's backyards as bait, the whole study would be doomed. "Everything we do is on private land," says DePerno. "If we didn't have public support, we could not have done this project—but we've had a tremendous amount of support."

Of course, the reverse is also true—involving the public in the study has allowed the researchers to teach ordinary civilians about bear management, answering their questions and assuaging their fears.This makes DePerno hopeful—if city people can accept bears, maybe there's a chance that other animals driven into civilization will get a fair shake. "It goes beyond just bears in Asheville," he says. "We're hoping to educate other scientists and the public on the potential for managing other urban species." 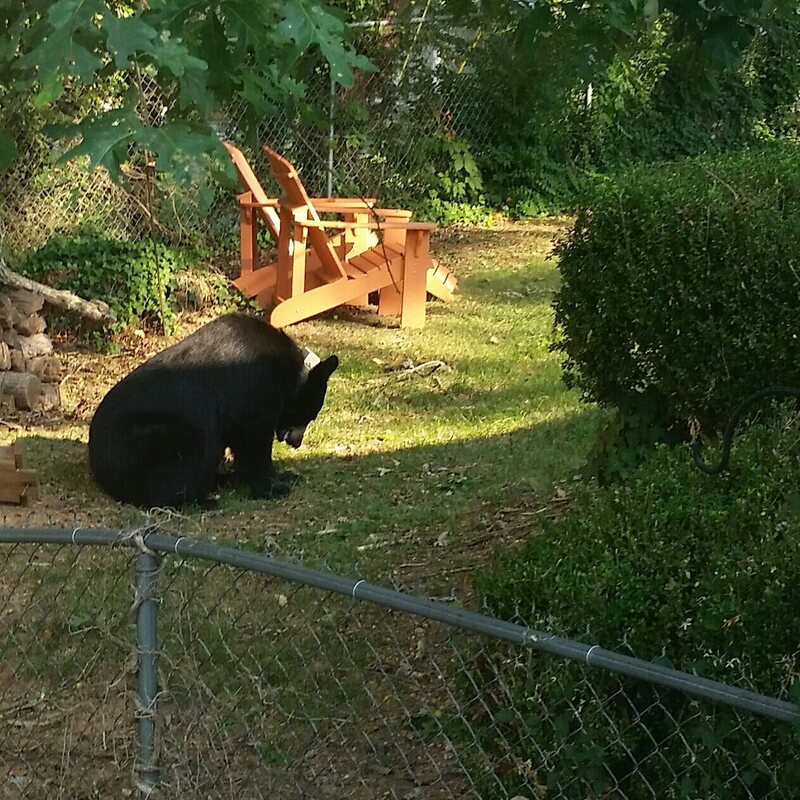 Another bear at Boll's, munching on acorns. Colleen Boll

Having bears next door does require shouldering some unique responsibilities. In bear-heavy areas, Ashevillians are asked to put their trash out the morning of pickup rather than the night before. When that's not enough, a kind of arms race can ensue, with some residents chaining their cans to trees and bolting the lids. (Boll freezes any food trash and puts her bag of used cat litter on top of it on trash day, and says it works like a charm.)

Birdfeeders are pretty much a no-go—bears will crush the whole feeder like it's one big seed, and gobble up the contents. They like to claw the covers off of hot tubs. And in Boll's neighborhood, walking at night requires a small gear kit: "You carry a light and a whistle, and you're constantly on the lookout," she says. "Not because anything that has happened that I know of—but because hello, there are bears!"

But most human residents seem to think it's worth it. "Every single bear sighting I've had has impressed me a lot, because I'm in awe of them," says Boll. She says she doesn't know anyone anti-bear, and that new residents who are confused or frightened are quickly educated by their neighbors, if the scientists don't get to them first. Researchers have extremely detailed bear whereabouts data, but they haven't released it—not because they fear vengeance against the bears, but because they've realized that people love the bears too much, and might go looking for them.

Boll doesn't need a map to tell her they're there—she can just look out her window. "Part of me would love to know that information," she says. "But I'm sort of glad they're not sharing it, because I think they're constantly behind my house."