Yes, President Donald Trump has been known to stuff his face with Big Macs — but on Thursday, Trump found out that his love for McDonald's might be unrequited.

It was a scandal that lasted seconds: Without any prior warning, after its usual tweets about McDonald's fries and McDonald's coffee and McDonald's ice cream, the fast food giant's corporate Twitter account tweeted — and deleted — a lacerating critique of Trump's leadership and, well, hand size. 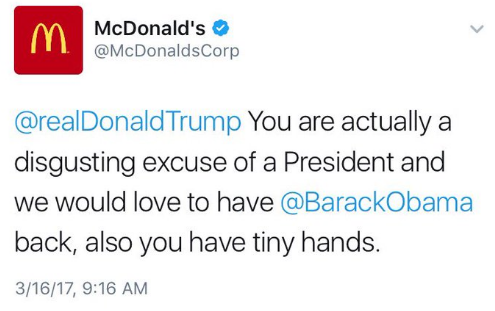 A screenshot of the tweet before it was deletedSource: Mic

Freference, here is a photo of the hands in question using a fork and knife to eat KFC:

T McDonald's deleted the tweet immediately and claimed their corporate account had been hacked, we couldn't help but wonder: Is Donald Trump's long love affair with fast food finally over?

Whatever the case may be, let's use this moment to reflect on happier, lesser known times: Donald Trump's long, long history with burgers, soda, pizza and other trans-fat-soaked goodness.

Before Trump was president, before he hawked immigration bans and Paul Ryan's healthcare dream, before he proposed a complete shutdown of Muslims entering the United States, Donald Trump was something of a fast food celebrity.

Let's burn some of those grease-soaked calories and take a walk down memory lane:

It's 1988. Ronald Reagan was about to pass the presidential baton to George H. W. Bush. Donald Trump is in a commercial for Diet Pepsi.

If Trump and the soda industry had to publicize their relationship on Facebook, they'd undoubtedly select the "It's complicated" option. Trump celebrated his presidential win with a McDonald's meal and a bottle of Diet Coke — despite tweeting that Coke was garbage way back in 2012, just less than a month before Obama was re-elected:

The Coca Cola company is not happy with me–that's okay, I'll still keep drinking that garbage.

And, of course, this classic:

I have never seen a thin person drinking Diet Coke.

Donald and Ivana Trump's divorce was finalized in 1992 — so, naturally, the pair starred in a commercial for Pizza Hut together three years later. The split, which was extensively publicized, received scrutiny for the couple's pre-nuptial agreement. In the Pizza Hut spot, the now-president alludes to this by telling his ex that she is "only entitled to half" of the stuffed-crust pizza. Funny.

Pizza Hut insiders referred to this commercial as "Pizza Slut," according to Page Six. A signed copy of the commercial's storyboard is currently for sale for $15,000 on the site Moments In Time.

According to AdWeek, Pizza Hut saw a boost in sales after the Trumps shilled its stuffed-crust pizza, so it makes sense the company would bring Mr. Moneybags back for another advertisement. At the start of the millennium, Trump starred in a 30-second Australian clip to promote the company's "Big New Yorker" pizza. In this day and age, the brand surely would have dubbed it "bigly."

2002: Trump asks for business advice from a McDonald's puppet

Riffing off his status as a money mogul, this commercial has billionaire Trump asking for business advice from Grimace, a purple creature that can talk for some reason, who's been in the McDonald's clan since 1971. Trump is awestruck that Grimace was able to shell out a Big N' Tasty for just a buck.

Trump cited McDonald's when he explained to Anderson Cooper how fast food was more likely to be clean. "One bad hamburger, and you can destroy McDonald's," he said. While chain restaurants are often consistent and unified in their food preparations, they aren't necessarily safe. For one, foods from these spots are often void in micronutrients and heavy in salt and fat, contributing to a host of illnesses, including diabetes and obesity.

Even more, a recent report found that a third of all fast food packaging contain health-compromising chemicals meant to keep the wrapper from getting greasy. Some of the substances, including PFOSs and PFOAs, have been associated with an increase risk for cancer, high cholesterol, lowered fertility and negative developmental effects in kids, CNN reported.

2009: Trump clones himself to beat the Manning brothers in acompetition

Okay, so milk's favorite cookie isn't technically fast food — but this cameo needs to be discussed. Just six years before he vowed to never eat another Oreo again, Trump starred in a golden cookie ad campaign, peddling Oreo's Double Stuf Racing League, a league where competitors duel to see who can "twist, lick and dunk an Oreo cookie into a glass of milk the fastest," AdWeek reported. In the commercial, Trump unveils his "partner," who happens to just be a clone of himself (actor Darrell Hammond dons Trump's signature hair and suit look).

The whole thing makes very little sense, really, but before Oreo announced plans to do work in Mexico, Trump seemingly had fond memories of the experience. On June 26, 2014, Trump posted a still from the shoot on Instagram with the caption: "#TBT Filming a Oreo commercial with Eli Manning, Peyton Manning and Darrell Hammond."

Why Trump's love for fast food is troublesome

It matters what the White House eats. While former President Barack Obama was known for his almond snacking habit and distaste for trail mix that contained M&M's candies, it was the first lady who championed for healthy eating, making it her mission to fight childhood obesity.

Trump's love for fast food reflects on his food policy in America: It lacks substance. In September 2016, Trump said, if elected, he'd somewhat dismantle the Food and Drug Administration, a group responsible for food safety, label transparency and other regulations that help Americans understand what they're eating.

"If anything, it's the anti-intellectualism of the 1950s, steak-and-potato dinners that are politically and culturally projected and defended as 'American,'" Richard McCarthy, executive director of Slow Food USA told the Huffington Post. "The food movement, with its farmers markets, CSAs and preventative health, is almost the opposite of what he'd want to be aligned with."

Just like big food corporations would rather their customers to eat their food in blissful ignorance, Trump's lack of food policies suggest he's rather ignorant himself on the importance of prioritizing food in the country.