All aboard whatever the heck this thing is! Musks' Chicago Express Loop would transport passengers from downtown to O'Hare in 12 minutes. The Boring Company

The $1 billion construction estimate is a fraction of what subterranean transit projects cost.

The Boring Company, the tunneling venture Tesla CEO Elon Musk started in 2016 out of his personal frustration with surface-level gridlock, has made a significant step towards evolving beyond billionaire-passion project: The company has been selected to build and operate an 18-mile, 12-minute rapid transit connection between Chicago's downtown Loop and O'Hare International Airport, according to news reports.

The project would be the first demonstration of Musk's futuristic quasi-transit technology: autonomous 16-passenger vehicles that transport passengers on what the company calls "skates"—moving, multi-directional platforms that lower passengers from the surface underground and to their destinations at speeds of up to 150 mph. Most transit moves horizontally, some moves vertically; the concept for the "Chicago Express Loop" is to do both.

Currently, it takes $5 and 37 minutes to travel from downtown Chicago to O'Hare on the Chicago Transit Authority's Blue Line "L" train—faster than driving. A ticket for top-speed travel on the Express Loop would cost $25, according to the proposal. Most deliciously for Mayor Rahm Emanuel, who approved the deal, the Boring Company has agreed to pay upfront costs for the construction of the project, which it estimates will cost less than $1 billion, according to reports.

Whether any city should be encouraging Musk's anti-transit-"transit" proposals, which by nature favor expensive, low-capacity modes over more utilitarian approaches, is up for the debate. The Musk "Loop" would have a capacity of 2,000 passengers per hour in each direction, which is about 60 percent of the Blue Line's current, mostly-under-capacity average hourly ridership. Debatable too are the merits of this particular project for airport-bound Chicagoans—the Blue Line works pretty darn well, and airport express lines in other cities, appealing mostly for business travelers, haven't panned out so well. In Toronto, where the subway system doesn't reach the international airport, a brand-new airport express line has fallen seriously short of ridership expectations, even with its one-way fare of $12.35.

Plus, none of the Boring Company's technology is remotely proven. A video released by the company in July 2017 of a "car skate" in action showed a Tesla being lowered underground on what essentially looked like a giant elevator that one might find in an Apple store. They haven't been tested for public use. And while a 16-person autonomous vehicle isn't a novel concept, "the particular model Boring envisions—based on a modified Tesla Model X car chassis—still has to be built on a large scale," Bill Ruthhart and John Byrne of the Chicago Tribune reported.

But at least one aspect of the proposed Loop concept would be incredibly valuable if Musk actually pulled it off, and not just to Chicago. That's the cost of the tunneling itself. Digging the big hole might be the most mundane element of the project, but it's probably the most difficult to do affordably. If the Boring Company's cost projection of $1 billion is anywhere near accurate, that pencils out to $55.5 million per mile—far and away, the cheapest construction cost for any subterranean transit line in the U.S.

Digging tunnels is very, very expensive: Busting through hard rock, excavating and supporting it, managing drills so that they don't get stuck, installing proper ventilation: All of this is precarious work that takes time and money. Musk has focused the Boring Company on reducing the time element by ramping up the power of boring machines and automating reinforcements. The $1 billion cost projection for Chicago is a number that relies on Musk's confidence that the Boring Company "can build tunnels at least 14 times faster than previous efforts, which a company official acknowledged the company must still prove," the Tribune reported.

Shorter construction time would translate into fewer labor costs, one of the main reasons that building subways in the U.S. is ludicrously expensive, especially when compared to other countries. The writer and transportation researcher Alon Levy compiled the grim per-mile pricing of recent tunnel projects for CityLab in January, shown below. 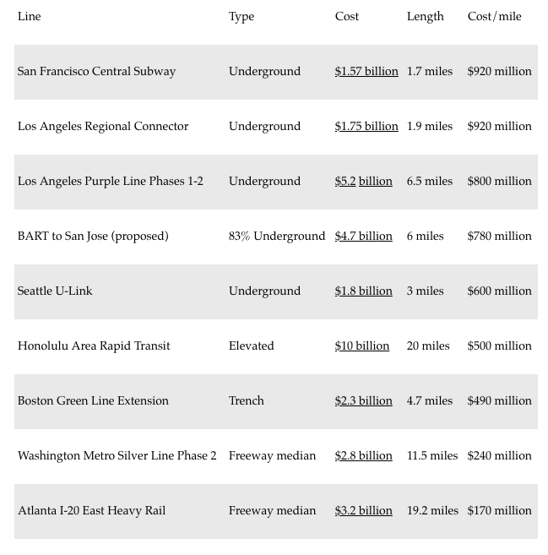 This table gives a sense of how extraordinary Musk's project would be on a cost basis—and how improbable. Experts have expressed skepticism about whether Musk could make a serious breakthrough in boring technology. "His machines that build tunnels look pretty standard," Herbert Einstein, a professor of engineering Massachusetts Institute of Technology told Forbes in April. "I've not seen anything from him that is different from what other people do except for the smaller diameter. ... The smaller you go, the more quickly you can build it and the cheaper. That is certainly the case, but I don't know if it's massively lower."

Plus, it's not just the time and labor costs that make tunneling pricey. Government regulations take time to navigate, there aren't that many drilling companies working in the U.S., and contractors can be unreliable. Those aren't technological fixes, and Musk has already run into his share of regulatory barriers and rightful concerns from the public about his quixotic goals. The company has gained approval and built a two-mile "test tunnel" beneath SpaceX's headquarters in Hawthorne, California, and is still negotiating with city officials in L.A. and Culver City to construct a 6.5-mile test tunnel beneath I-405. It also has preliminary approval to dig out in northeast Washington, D.C. The Chicago deal represents the major validation for the Boring Company, which endeavors to "solve the problem of soul-destroying traffic," in Musk's words.

The $1 billion cost projection is probably wildly inaccurate, a figure that reflects Musk's signature confidence in his own achievements. That confidence is built on some remarkable technology: Musk has brought reusable rocketry, radically improved batteries, and paradigm-shifting electric vehicles to the market. So far, however, it's not clear whether he can actually make money doing these things.

But regardless of whether Musk's boutique airport-tube ever sees a paying passenger, any cost reductions to subterranean construction that Musk might develop along the way would be most welcome by, for example, the millions of train riders awaiting a new Hudson River tunnel connection between New Jersey and Penn Station, or the commuters in Los Angeles who've dreamt for decades of a second tunnel through the Sepulveda Pass. Frankly, if Elon Musk can tunnel those 18 miles to O'Hare for less than $.5 billion per mile, it would be pretty miraculous.

Laura Bliss is a staff writer at CityLab, covering transportation, infrastructure, and the environment. She also authors MapLab, a biweekly newsletter about maps that reveal and shape urban spaces (subscribe here). Her work has appeared in the New York Times, The Atlantic, Los Angeles, GOOD, L.A. Review of Books, and beyond.