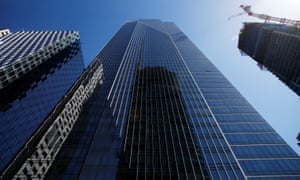 The luxury condominiums at the Millennium Tower in San Francisco include every conceivable perk - from a wine cellar and screening room to the opportunity to attend "fireside chats with local and international thoughts leaders" - but for Frank Jernigan, one of the best features is the "engineering" button on the house phone.

"If you have a stopped up toilet or a leak, you just hit the button and someone comes up and fixes the problem within 15 minutes," the retired Google engineer and owner of two units (one for himself and his husband, another for his husband's father) said of the building he has called home since 2011.

It's a nice touch, but residents like Jernigan are now facing an engineering problem that cannot be solved with a simple button.

The 58-story structure - the tallest residential building in San Francisco and, according to developers, the tallest reinforced concrete structure in the western US - has sunk 16 inches since its completion in 2008, and has tilted at least two inches toward the north-west. 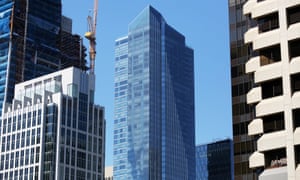 All buildings settle into their foundations, but this building was only projected to sink between four and six inches over its lifetime. The revelation of the building's unexpected decline has set off a round of lawsuits, government inquiries, and recriminations that promise to last for years.

"It's unprecedented," said Steven Blum, one of the attorneys representing Millennium residents in a class action lawsuit. "I've been doing cases involving sinking buildings for almost 30 years, and I have not seen anything like this."

"The only thing that comes close is the Leaning Tower of Pisa," he added. "But that's a joke. There is nothing like this."

San Francisco is flanked by seven subparallel fault lines. The most notorious, the San Andreas Fault, produced the 1906 earthquake that leveled most of the city as well as the 1989 Loma Prieta earthquake collapsed portions of the freeway and the Bay Bridge.

I've been doing cases involving sinking buildings for almost 30 years, and I have not seen anything like this

The prospect of the next "big one" has long kept San Francisco architecture relatively low to the ground, but in the early 2000s, developer ambitions shot skyward. Despite the fact that much of the city is at risk of "liquefaction" during an earthquake, and despite the fact that a group of engineers from the University of California Berkeley reportedly pushed for stricter standards for skyscrapers, developers raced ahead.

The Millennium Tower was among that first wave of new high-rises. Though it opened in 2009, just after the housing market crashed, the 420 units eventually all sold, for a total of $750m. As recently as February, a three-bedroom unit was listed for nearly $9m.

Much of that value of appears to have vanished when news of the sinking broke in August. The same three bedroom is now listed for $3.79m, and owners of 163 units have applied for property tax adjustments. In aggregate, the appeals claim a reduction in value of those 163 condos from $374m to $153m, according to city records. 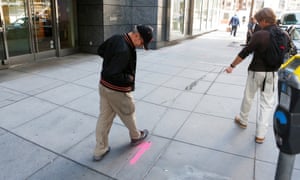 "It's horrifying," said Jernigan, who filed property tax appeals. "A third of my wealth is tied up in that property. The reason we put the value at zero is because no one wants to buy there now. If you can't sell it, then it's got a value of zero on the market."

Thus far, the consequences of the sinking and tilting appear to be confined to some cracks in the concrete walls in the basement. But with so much money - and liability - at stake, the blame game has been swift and furious.

The developers, Millennium Partners, are pointing the finger at the Transbay Joint Powers Authority (TJPA), a government agency that is building a massive transit terminal next door to the Millennium.

The TJPA, said Millennium spokesman PJ Johnston, has engaged in "five years of dewatering [that] has severely dropped the water table beneath our building, causing the soil to compress more than normal, resulting in the building settling beyond what could have been predicted". 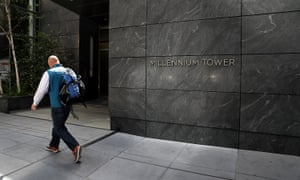 The building's developers are pointing the finger at a massive transit terminal being built next door. Photograph: Justin Sullivan/Getty Images

But the TJPA argues that most of the building's settlement occurred before it began underground construction in the adjacent plot, and blames the developer.

"The only plausible explanation for the poor performance of the Millennium Tower is a completely inappropriate foundation for such a heavy structure," the agency said in a statement.

Aaron Peskin, a San Francisco supervisor, is raising concerns about the efficacy of the city's department of building inspections (DBI). City documents reveal that the DBI and the developers were aware of "larger than expected settlements" in February 2009, before the building received a final sign off by the DBI.

On Tuesday, the developer released a report asserting that the building remains seismically safe, despite the unexpected settlement.

"The effect of settlement on most building elements and its ability to resist large earthquakes is negligible," stated the report, which was prepared by respected structural engineer Ronald Hamburger.

For Jernigan, it's hard to know what to think.

"We're not sure what to do or who to believe," he said. "We hardly believe anything we're told anymore."