Separating waste atop a mound of garbage at a landfill in Delhi last month.CreditSaumya Khandelwal for The New York Times

By Hari Kumar and Kai Schultz

GHAZIPUR, India — Huddled in a stinky, airless room near the center of India's capital, Rammurti fumed over the 17-story-high mountain of trash half a mile from her home.

The 43-year-old mother, who goes by one name, had watched the garbage in her village of Ghazipur pile higher and higher over the years. It wafted a sickening cocktail of airborne particles that infected her neighbors with tuberculosis and dengue fever, singed trees and turned the ground water a filmy yellow.

But nothing had prepared her for one afternoon last September when a tower of trash broke away from the mass during monsoon rains. It crashed into a nearby canal, which created a surge of sewage that flung motorcyclists into another canal also filled with dirty water.

By the time the police arrived, two people were dead. One of them was Rammurti's youngest son, 19-year-old Abhishek Gautam.

"The dump killed my son," she said.

In the metropolitan area of Delhi, which includes the capital New Delhi, trash heaps are towering monuments to India's growing waste crisis. About 80 billion pounds of trash have accumulated at four official dumping sites, on the fringes of a capital already besieged by polluted air and toxic water, according to the supervisors of the dumps.

The dumps in Delhi and in cities such as Mumbai and Kolkata have become some of the largest, least regulated and most hazardous in the world, said Ranjith Annepu, a co-founder of be Waste Wise, a nonprofit organization that aims to address waste management problems. 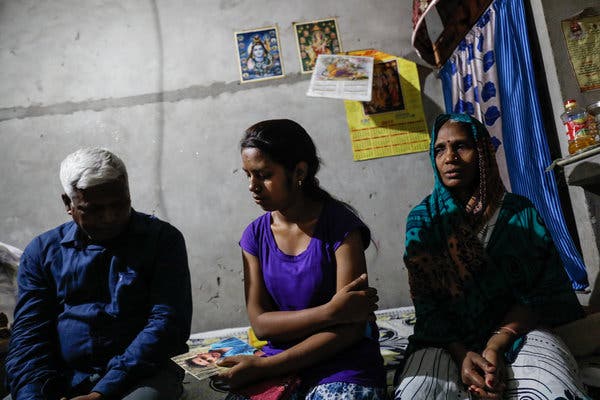 Mahipal Singh and Rammurti with their daughter Neha, center, holding a picture of her brother Abhishek, 19, who was killed when Ghazipur landfill collapsed last year.CreditSaumya Khandelwal for The New York Times

"If this continues to happen, the city will drown in its waste," said Swati Singh Sambyal, a program manager at the Center for Science and Environment in New Delhi.

Responding to the problem, the Indian government this past week vowed to eliminate single-use plastic by 2022.

But the government has been slow to take action to protect the environment. Politicians don't want to risk losing votes by making tough decisions that could be unpopular.

Power in Delhi is shared by the local and national governments, which are controlled by different political parties, leading to bureaucratic gridlock. Even when rules are introduced, enforcement is weak and offenders can often pay a bribe to avoid punishment.

Something as simple as installing trash cans around Delhi has not been done, partly because garbage collection is not guaranteed and many residents are used to simply flinging trash onto the ground.

"You don't know whether the public will even use them," said Mr. Annepu.

Driving into Delhi, virtually no trash cans are visible. Refuse piles up in slums, next to government offices and outside luxury condominiums. Shantytowns without sewage systems have mushroomed all over — next to railroad tracks and public parks and behind high-end shopping centers.

Separating waste at a landfill.CreditSaumya Khandelwal for The New York Times.

In the last two decades, Delhi's population has quickly risen to about 19 million from about 12 million and infrastructure and governments services have not kept pace.

During roughly the same period, the amount of waste ferried to the dumps has accumulated rapidly, growing from eight million pounds to at least 20 million daily. About half of the daily haul is converted to energy or composted. The rest sits and festers, according to P.K. Khandelwal, the chief engineer of the East Delhi Municipal Corporation, a local government body.

The problem with waste buildup has become so severe that the Supreme Court said earlier this year that air traffic control at Delhi's international airport eventually would have to steer planes around the dumps because they are so high. The court also instructed lawmakers to find ways to eliminate the piles of garbage.

And a separate court has warned government officials responsible for health projects that they could be charged with homicide if residents continue to die from diseases such as dengue fever, which is spread by mosquitoes breeding in dirty water.

There are some signs of hope.

One of the four dumps in Delhi, which is operated by the government and a private company, has reduced its garbage heap by turning some trash into mulch.

The governing party, led by Mr. Modi, has taken steps to clean up the country with its Clean India Mission, started in 2014. And waste management rules introduced in 2016 set fines on people who do not separate their trash at home for recycling.

But Mr. Khandelwal said the government had difficulty finding land for new dumps and dealing with local protesters who oppose waste sites in their backyards.

Smoke from burning garbage at a landfill rising over homes nearby.CreditSaumya Khandelwal for The New York Times

Political will to find a solution is weakened because of ragpickers who live in nearby slums and remove plastic from the dumps. One supervisor said he feared that if he blocked the ragpickers, who sell their finds in the market for the equivalent of a few dollars, it could turn violent and disrupt Delhi's informal recycling industry.

A few hundred thousand people earn money from being ragpickers in Delhi.

"There is absolutely no painless way to fix this waste problem," he said. "Politicians are not willing to make even one resident unhappy because then that resident will vote for the other party."

Mr. Dikshit noted that the short-term strain of revamping waste management in Delhi outweighed long-term benefits for many residents. Poverty is widespread, and many are concerned primarily with providing food and basic shelter for their families from day to day.

Three of the dumps exceeded their capacity years ago, rising to triple the legal height limit of 65 feet. But they remain open, shrouding neighborhoods in acrid plumes and bulging with flattened handbags, car windshields, needles and rotting food.

Mr. Annepu said India still could get a grip on its overflowing garbage as other countries with large dumping sites such as South Korea and the United States have done.

Collecting 100 percent of the waste in Delhi, closing the dumps and converting them into sanitary landfills would cost about $75 million, he estimated.

A ragpicker separating cloth from waste at a garbage collection point in Delhi.CreditSaumya Khandelwal for The New York Times

But "political will has not materialized into financing," he said, adding that waste management is not an issue voters hold politicians accountable for.

"The dirty air gets inside my body and my blood," said Ankit Yadav, 17, who lives next to the dump.

Some in the area questioned why the dump continued to grow despite government promises to finally shut it down after last year's fatalities.

"We are fourth-class citizens," said Mohammed Ismail, 66, a small-business owner. "Nobody listens to us. We die like insects. If this colony had been a V.I.P. colony, the dump would have been removed."

Ratan Kumar Barua, a resident who cannot afford to relocate, said he and his neighbors were at loggerheads with the government. He said he had made written complaints to the local police and government, a court body, a pollution control committee and Mr. Modi. They have all gone unanswered.

"Nobody will come to our rescue," Mr. Barua said.

On a recent day, trucks rumbled up a steep dirt road to the top of the garbage pile, where crows blotted out the sun and wind kicked up fumes from moldy vegetables and feces discarded in saggy plastic bags.

Down below, Faiyaz Khan, the owner of a dairy plot, said this patch of land was once dense forest, perfect for his buffalo. He wondered what his future would hold.

"The height of the dump keeps increasing and my health keeps decreasing," Mr. Khan said. "We are uneducated people. We do not understand the law, but we do know that this dump is illegal. What do I do? Shall I smash my head into a wall? How long can I live here?"