The Fool: The Dutch artists who worked for the Beatles (and made their own freak folk masterpiece) 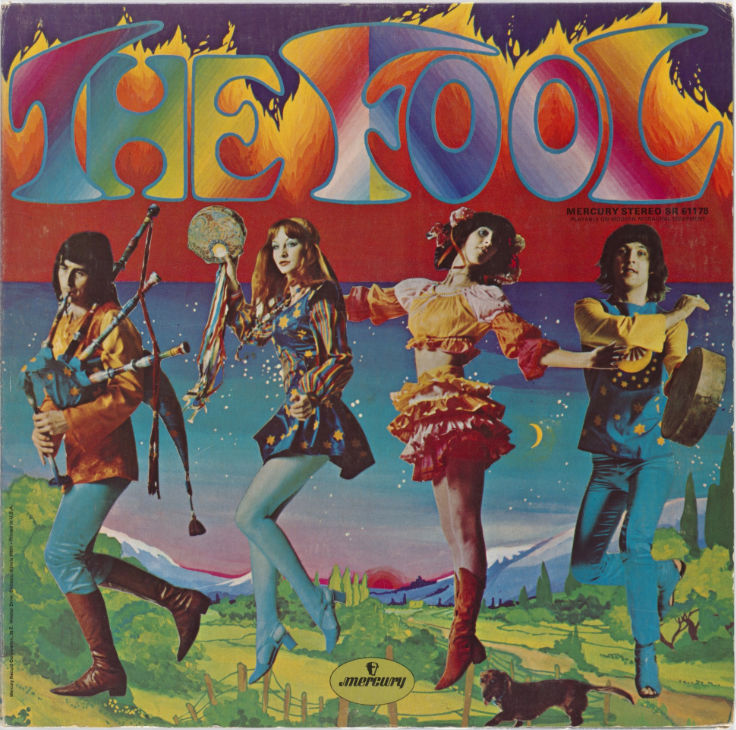 "It appears that some part of Slothrop ran into the AWOL Džabajev one night in the heart of downtown Niederschaumdorf. (Some believe that fragments of Slothrop have grown into consistent personae of their own. If so, there's no telling which of the Zone's present-day population are offshoots of his original scattering. There's supposed to be a last photograph of him on the only record album ever put out by The Fool, an English rock group—seven musicians posed, in the arrogant style of the early Stones, near an old rocket-bomb site, out in the East End, or South of the River. It is spring, and French thyme blossoms in amazing white lacework across the cape of green that now hides and softens the true shape of the old rubble. There is no way to tell which of the faces is Slothrop's: the only printed credit that might apply to him is "Harmonica, kazoo—a friend." But knowing his Tarot, we would expect to look among the Humility, among the gray and preterite souls, to look for him adrift in the hostile light of the sky, the darkness of the sea...)"

Although they are hardly household names today—and they should be—the Dutch art collective The Fool created some of the most potent, striking and exotic imagery of the psychedelic era. Their hippie-gypsy clothing was seen on the Beatles and their wives, Cream and other rock stars and their album covers and other creations have today become iconic. They also recorded an incredible, but long-forgotten album—its limited edition vinyl re-release is the occasion of this post—but more on that below. 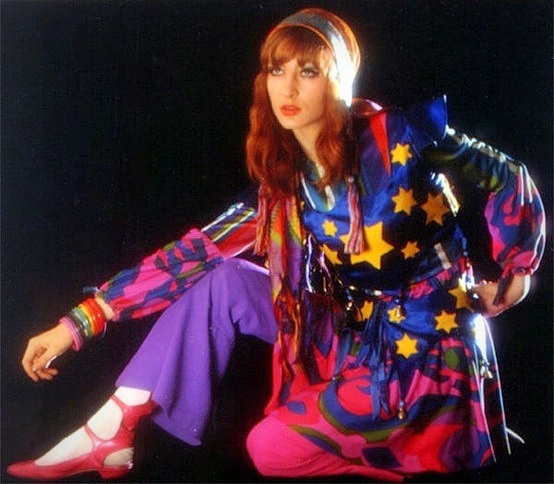 The Fool, before it was so named, started with just with two members—Marijke Koger the visionary psychedelic artist who was the collective's leader and Simon (or Seemon) Posthuma—and later Josje Leeger, Koger's friend from art school. Englishmen Barry Finch and photographer Karl Ferris were also involved. 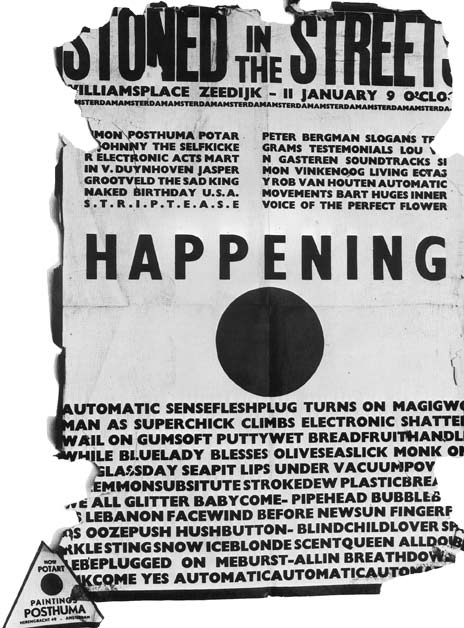 Posthuma and Koger met in 1961 and participated in a nascent counterculture boutique in Amsterdam called Trend. Posthuma staged a "happening" in 1965 called Stoned in the Streets featuring an "electronic striptease" from a bodypainted Marijke, future Firesign Theatre member Peter Bergman reading poetry and weirdo medical student Bart Hughes revealing the trepanation hole he'd drilled into his own skull to grossed out hippies. The two were living on Ibiza selling posters and making clothing when they were "discovered" by Ferris. His photos of them and their work caused quite a stir when they were published in England, which was then starting to turn from drab postwar black & white to swinging psychedelic day-glo. The pair relocated to London and began to design clothing and more for bands like Cream and Procol Harum. Cream manager Robert Stigwood had Koger and Posthuma paint Eric Clapton's Gibson SG—one of the most iconic guitars in history—as well as Jack Bruce's bass and Ginger Baker's bass drum head, the stage clothes and posters for Cream's first US tour. They did album covers for the Move, the Hollies and the Incredible String Band and an illustration for the concert program at Beatles manager Brian Epstein's Saville Theatre in Covent Garden. Of course it's not surprising that the Beatles themselves wanted to work with such forward-thinking and creative young people. One day, as Simon told it, John Lennon and Paul McCartney simply turned up at their home:

During John and Paul's first visit to our house in Bayswater, they saw the 'Wonderwall,' a composition consisting of a decorated armoire and a bust, against an arched wall, painted in the style that was up until then new to the world. "I love it, I want to live in it," John said when he saw the 'Wonderwall', and Paul agreed. Afterwards, Marijke laid the tarot cards for Paul. It turned out to be his inspiration for writing "The Fool on the Hill."

Although you can see Marijke and Simon's fashions on the Beatles during the "I am the Walrus" sequence in Magical Mystery Tour, it was not until a bit later, when the Beatles asked them to work on the Apple Boutique on Baker Street that they formed, and so named, the Fool artistic collective with the others. It was a big job, with the Fab Four basically charging the Fool to design the exterior of the store (including a controversial mural on the outside of the building that was painted by the duo over the course of a weekend with some art students including Mickey Finn, later the bongo player of T.Rex, assisting them), the interior, and all of the clothing sold there.

Film director Joe Massot was also inspired by the "Wonderwall" cabinet and it became the title of a psychedelic film he created of that name to showcase their striking vision starring Jane Birkin.The Fool, who also appeared in the quirky cult favorite, served as the art directors for the film and it's clearly as much their vision as it is Massot's. Indeed it was they who got George Harrison to do the Wonderwall soundtrack.

And speaking of soundtracks, the Fool made their own. Having met Hollie Graham Nash when they did that band's Evolution album cover, they tapped him to produce their eponymously-titled psychedelic freak folk album that was released by Mercury Records in 1969. Whereas it's a fascinating document of the era no matter the angle of regard, it also happens to be REALLY AMAZING MUSIC. The first time I heard it, my initial thought was "Oh, it sounds like an Incredible String Band kinda thing" and indeed it does, from the (fairly cack) singing to the use of exotic instrumentation, including tabla, Moroccan stringed instruments and Scottish bagpipes. One song even sounds like an ISB pastiche done by the Residents. But here's the thing, also like Incredible String Band, you have to give this one quite a few spins before you really "get" it. Had I written this review a few days ago, it wouldn't be such a "rave" review—because that's what this is, in case you were wondering, I'm unexpectedly NUTS about this album—but after listening to it a couple more times over the weekend, well, I've totally fallen in love with it. I went from a generally positive, but lukewarm appraisal to thinking The Fool sounded like an album I'd known and loved since childhood. Every song on it forced its way into my head where they will now reside forever. Had I written this post last week, let's just say it still would have gone over my head. At that point the magic of this album had not reached me. But then it did. This is one of those play-it-until-you-get-it things—like ISB, like Frank Zappa, like Pink Floyd even—that is absolutely worth putting the effort into. Even if you are initially turned off at the idea of flower children visual artists dabbling in pop music, get over it. This record is the real deal. I mean look at these people. Look at their artwork. They are authentically psychedelic!!! You can't fake this!

The Fool has been lovingly packaged and released as a numbered limited edition turquoise vinyl longplayer (with an extra track) by Holland's mighty Music on Vinyl label. They've pressed up just 1000 of them so if this is something that sounds intriguing to you—and I hope that it does—you might want to get on buying one stat before it's sold out and selling used for $80 on Discogs. A final thought about the album is that Graham Nash did a remarkable job producing it. I realize that he got pretty busy right after this (it came post Hollies, but before CSN had ramped up) but this album is a lost masterpiece in so very many ways. It's a pity that he didn't have a parallel career as a producer like Todd Rundgren.

The Fool even made an American tour, but disbanded as a working entity in 1970, leaving Posthuma and Koger, who were married for a time, to continue as a duo, Marijke & Seemon. They relocated to Hollywood where they painted a psychedelic mural on the exterior of the Aquarius Theater on Sunset Boulevard for the 1969 production of Hair. Today, Posthuma is based in Amsterdam—he's also written his autobiography A Fool such as I – The Adventures of Simon Posthuma, but so far it's only in a Dutch edition—and Marijke is based near Los Angeles. She still paints guitars and in recent years has been commissioned to do some outdoor murals in Europe. She is open for designing album covers and can be reached at her website. Finch and Leeger married on the day man landed on the moon, had six children (each named for a color) and remained together until her death by stroke in 1991. A store in Amsterdam inspired by their mother's work was opened by two of their daughters.

Although the Victoria & Albert Museum has some of the Fool's creations in their permanent collection, there needs to be a full-on Fool museum-level survey. And a coffee table book! SURELY a museum in the Netherlands should be looking into this!?!?! Look at the work below. This art (and history) deserves to be cataloged and respected; and preserved for future generations to enjoy. (I'm assuming that Karl Ferris took many of the photos below, but I'm not sure which ones.) 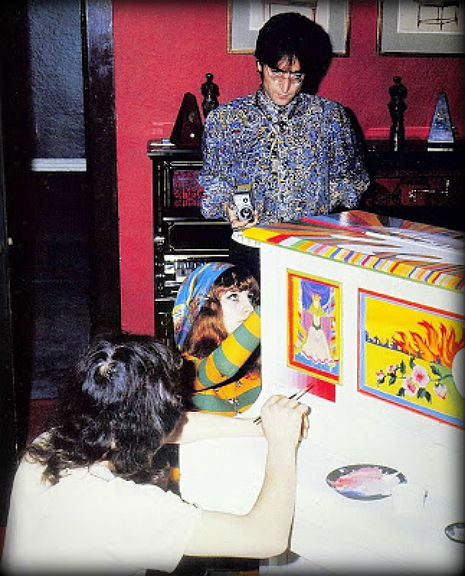 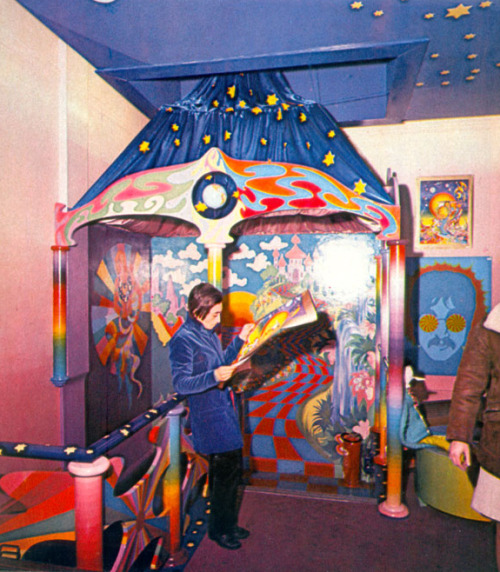 Inside the Apple Boutique 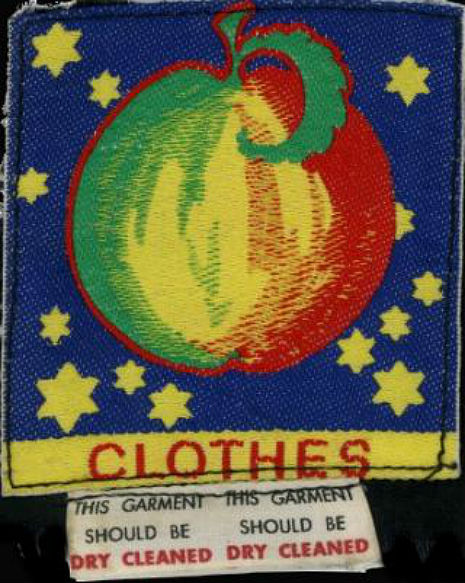 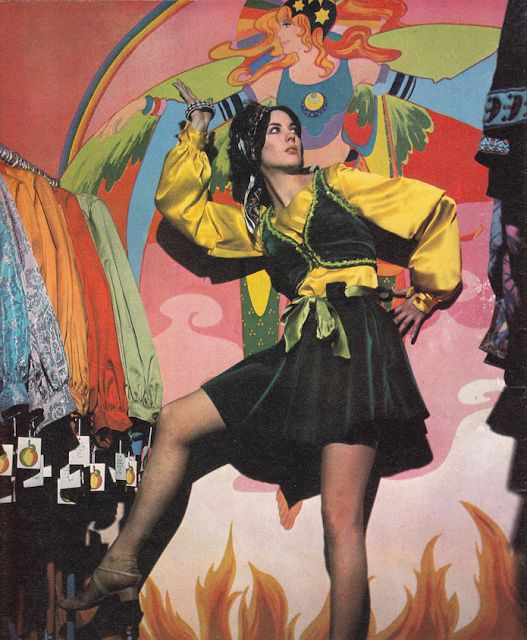 Model at the Apple Boutique 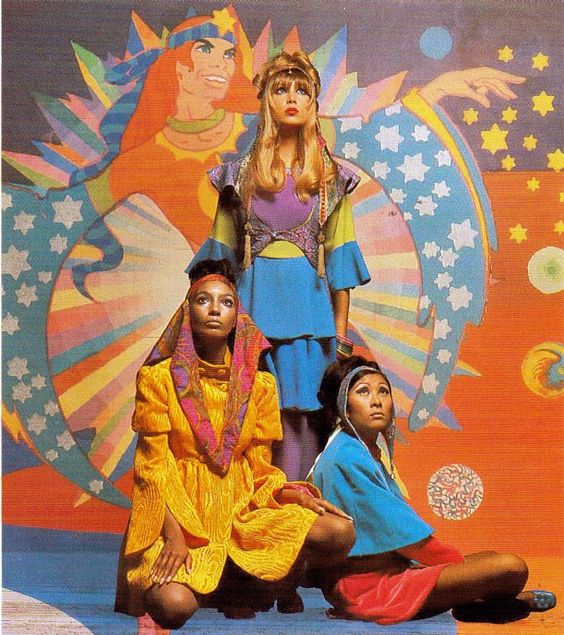 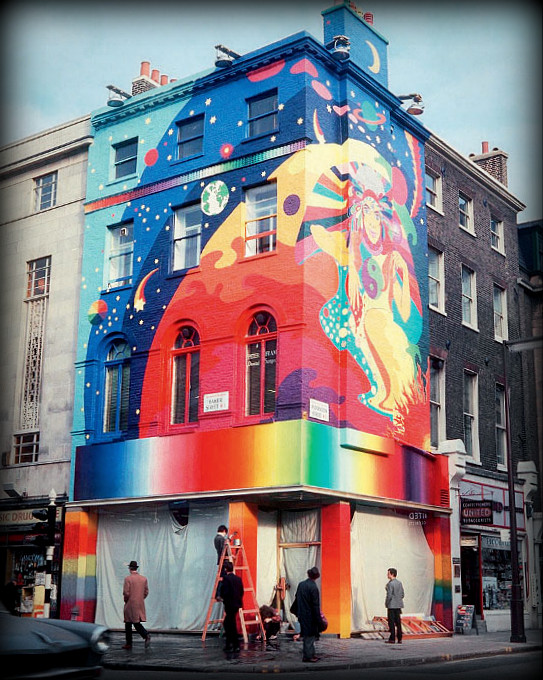 The mural on the side of the Baker Street Apple headquarters 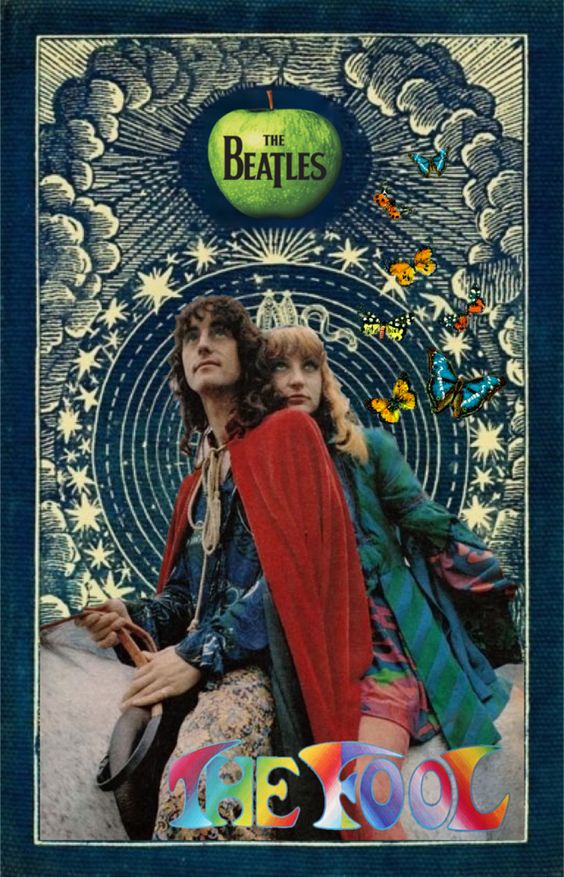 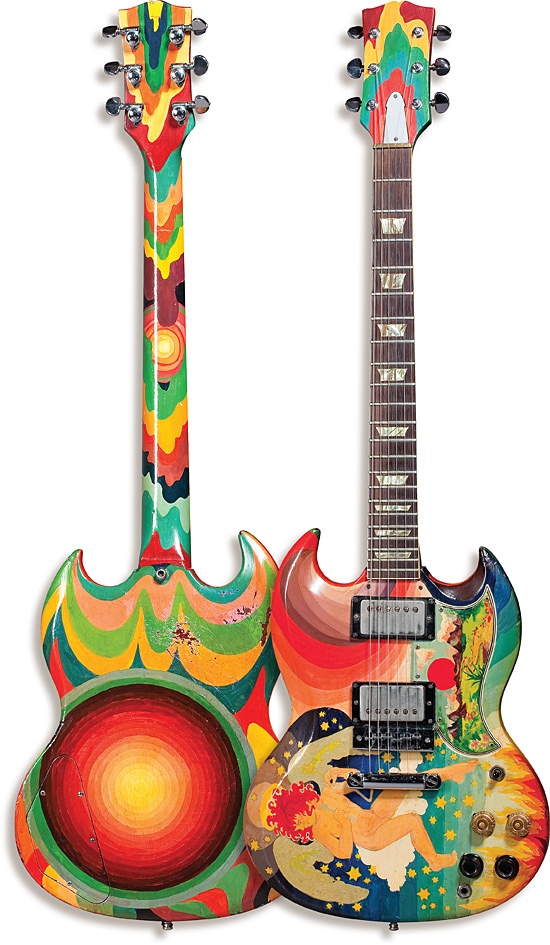 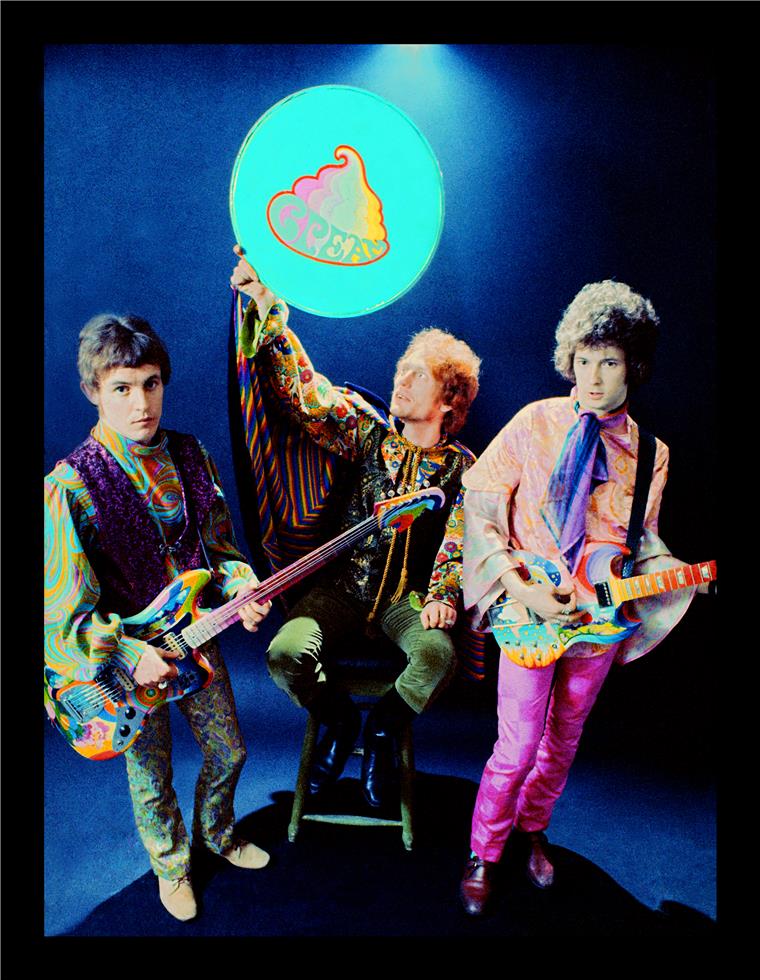 Cream in their Fool-ish finery 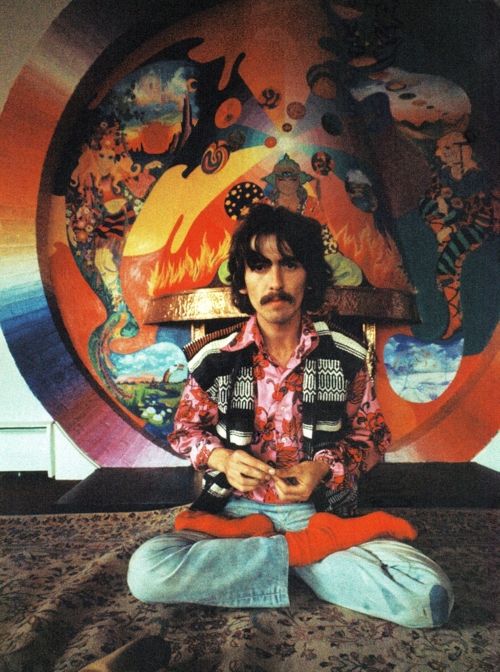 George Harrison posing in front of his Fool fireplace 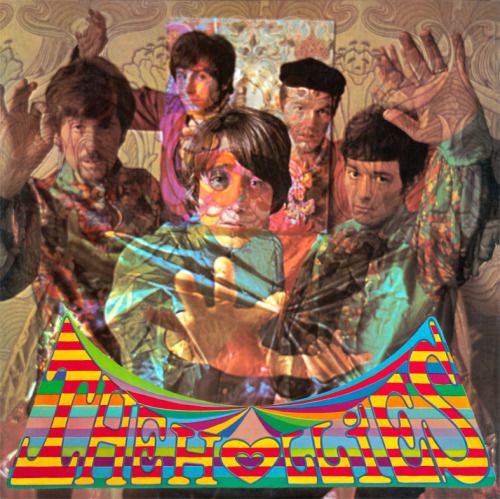 The Hollies get the full Fool treatment 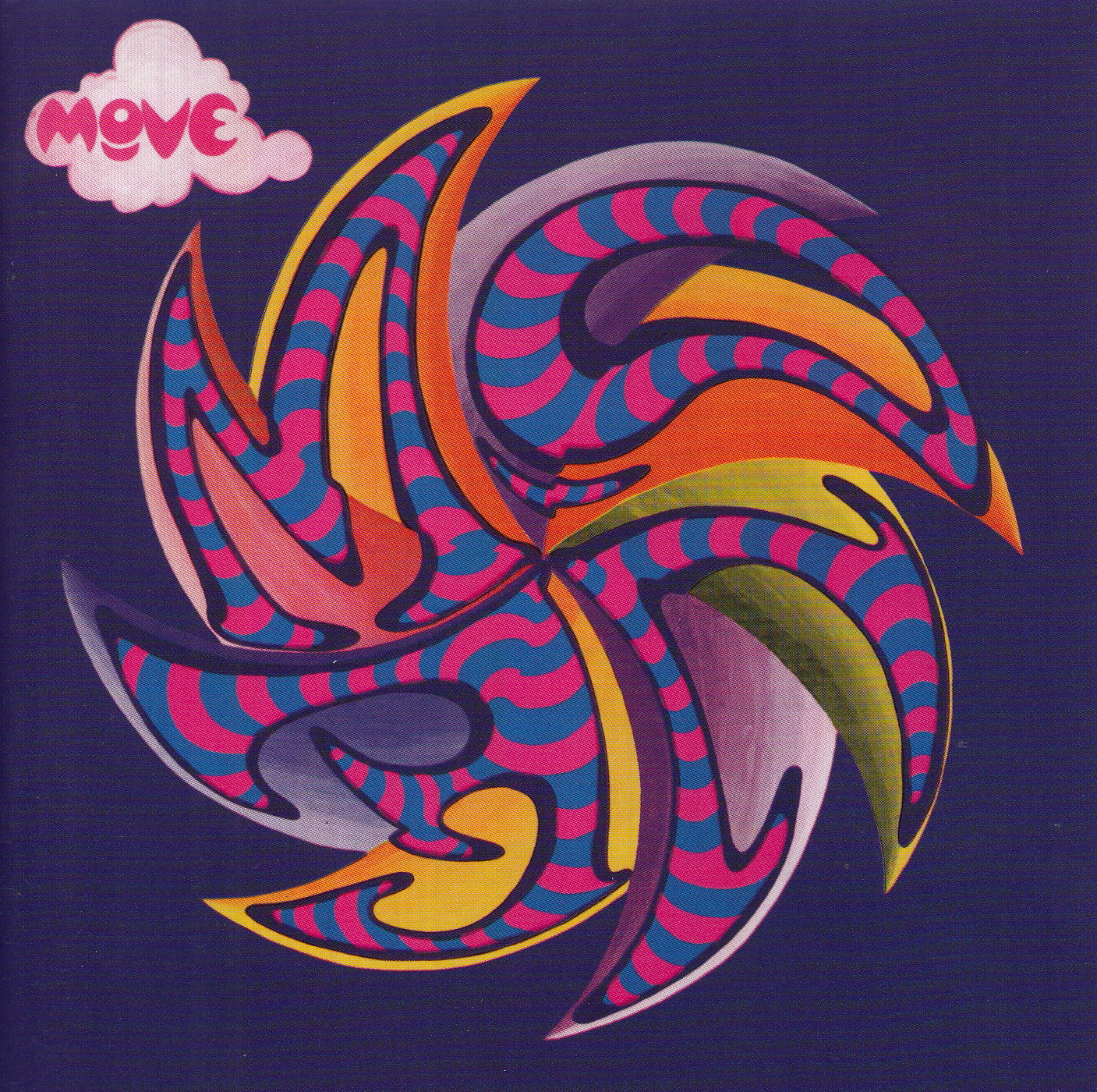 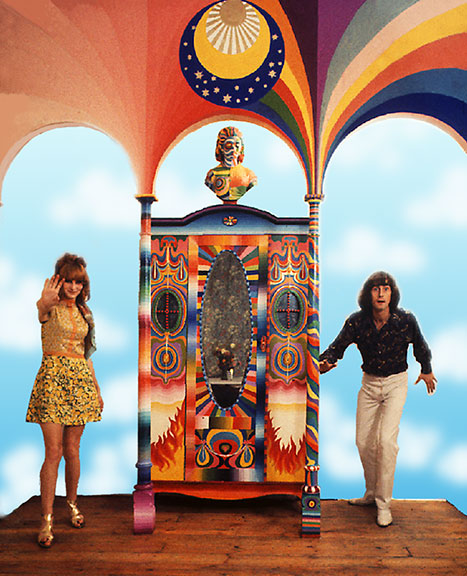 Marijke & Seemon with their "Wonderwall" cabinet that John Lennon wanted to live inside of that inspired the cult film. 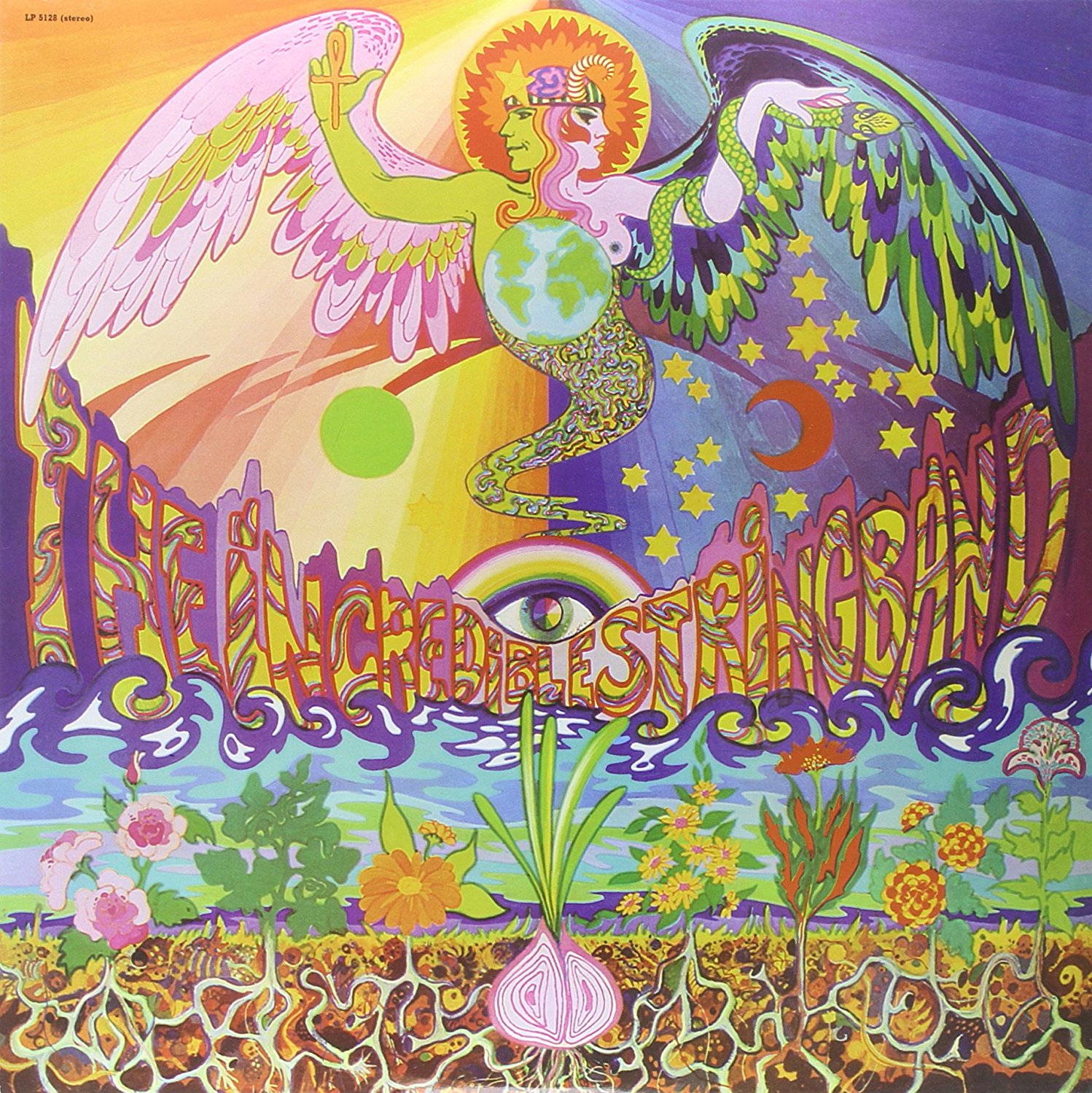 Cover for the Incredible String Band's classic second album 'The 5000 Spirits or the Layers of the Onion.' Paul McCartney called it his favorite album of 1967. 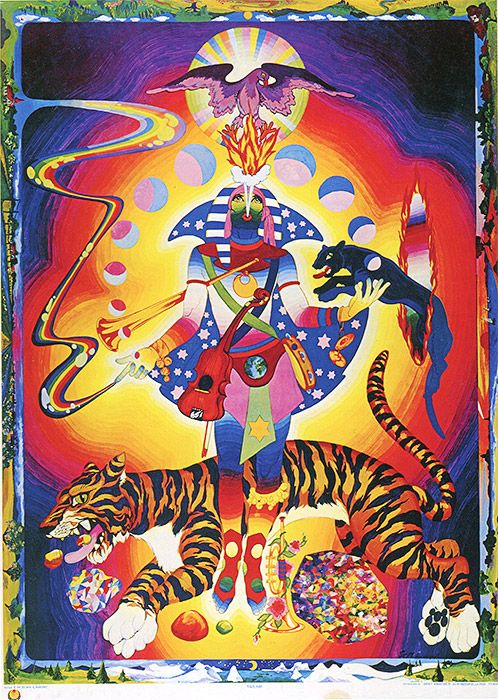 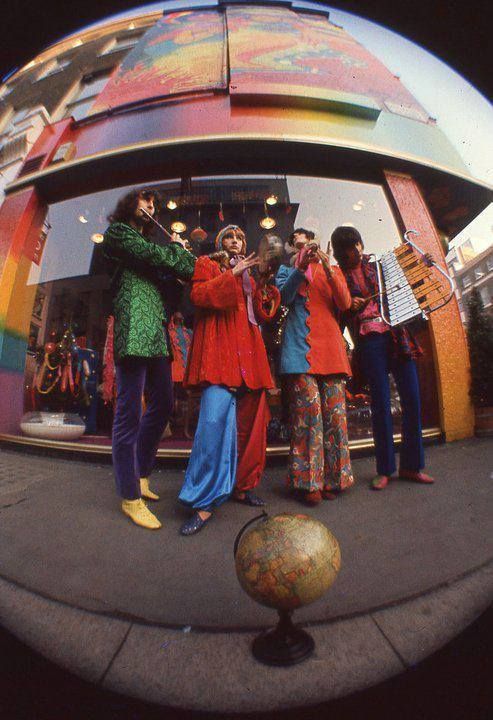 In front of the Apple Boutique 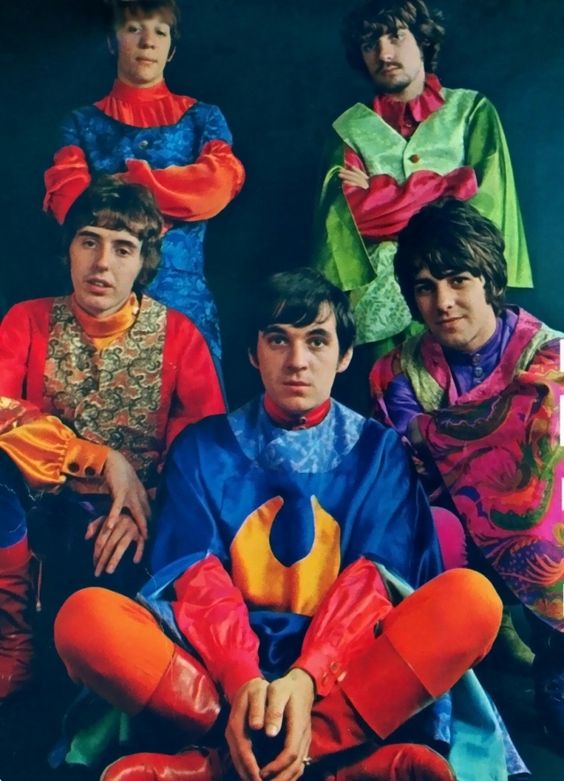 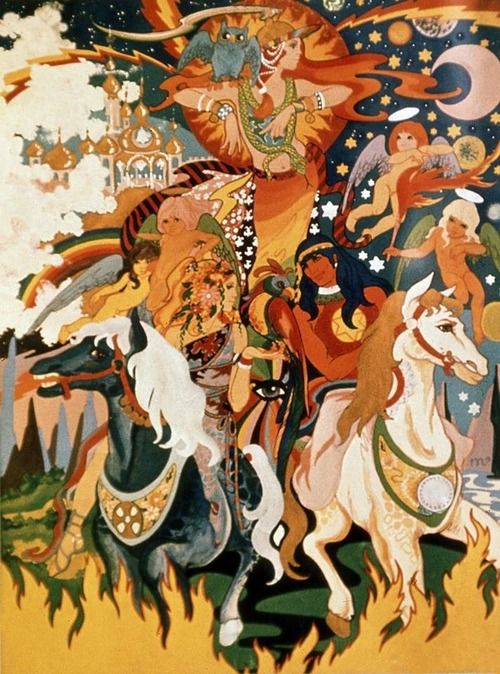 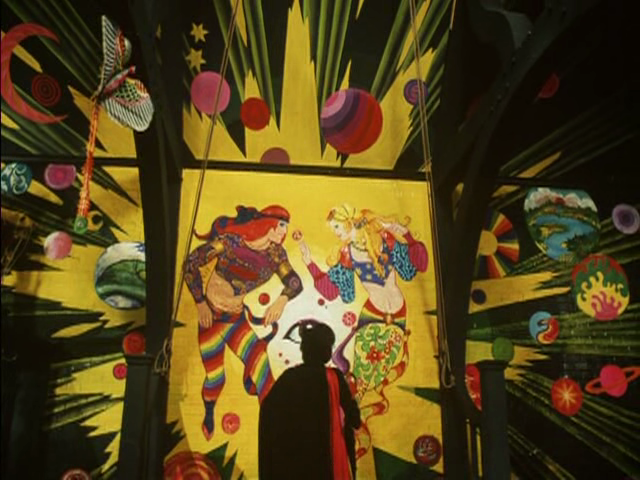 A set from 'Wonderwall' 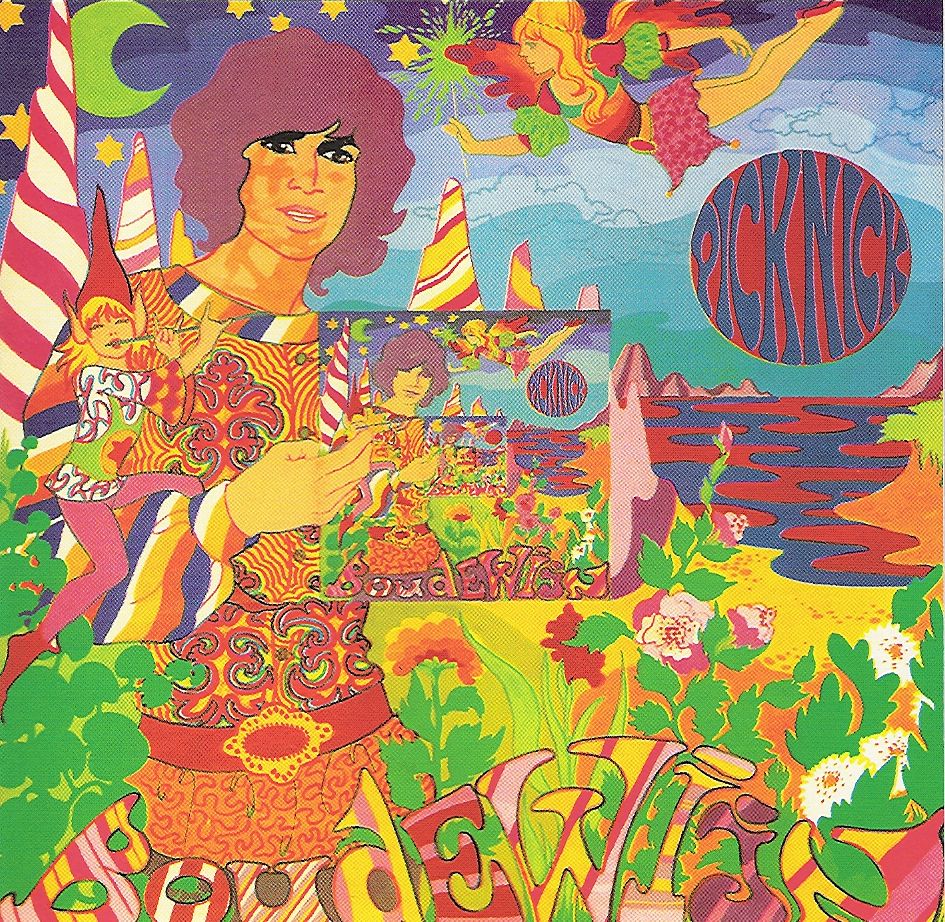 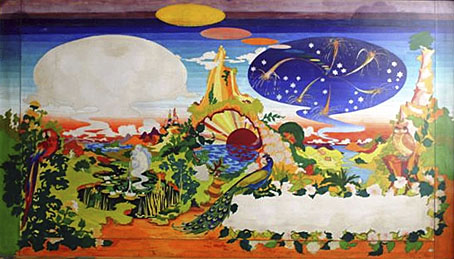 The proposed but not used gatefold image for the 'Sgt. Pepper's' cover.

Gatefold of 'The Fool' LP sleeve.

A delightful short documentary on the life and times of Marijke Koger-Dunham.

Color AP footage of the opening of the Apple Boutique

The trailer for 'Wonderwall.' Directed by Joe Massot with music by George Harrison.

Obvious dummy Eric Clapton interviewed with his Fool guitar backstage during Cream's 1968 American tour. Do ya think this clip was seen by the makers of 'This is Spinal Tap'?

The Beatles wearing tunics designed by Marijke Koger during the live satellite broadcast of the "All You Need is Love" recording.

The "I am the Walrus" sequence from 'Magical Mystery Tour'