The subversive cadre of women over 60 prove that "old" is not what it used to be. 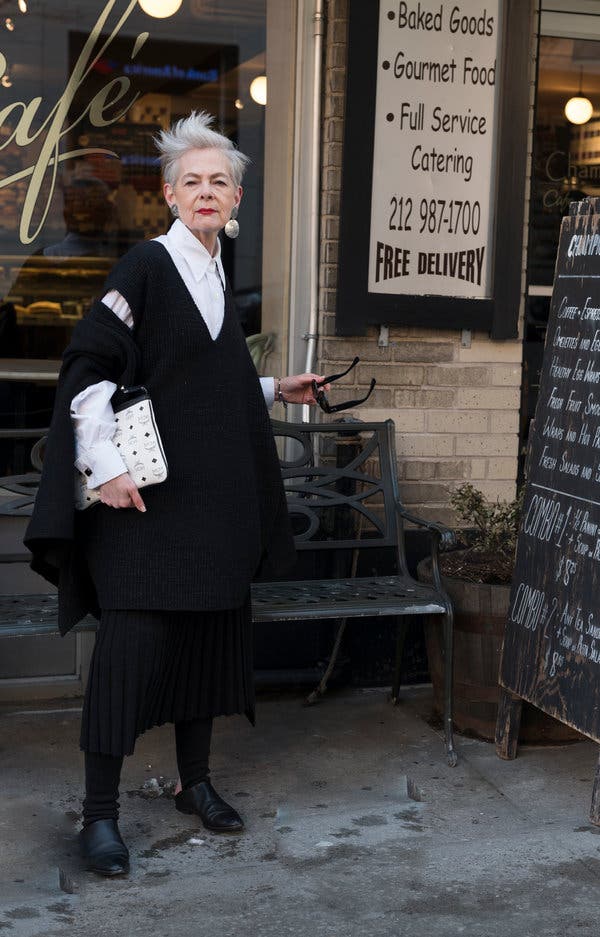 Photographed with a hip thrust forward to show off her Margiela apron dress and modishly frayed jeans, Lyn Slater projects a kind of swagger pretty rare among her peers. A professor at the Graduate School of Social Service at Fordham University, with hyper-chic side gigs as a model and blogger, she is known to a wider public as an Instagram idol.

Sure, she's 64, a time when some women her age are feeling pressed to close up shop. But if you are Ms. Slater, that's not going to happen.

On Accidental Icon, her influential Instagram account, she tends to vamp in an eye-catching mash-up of Comme des Garçons, Yohji Yamamoto and consignment store finds. Her following, hundreds of thousands strong, skews young, she said, and is responsive to her sass.

Her brash voice is one in a chorus of like-minded contemporaries and women in their 70s and 80s, who are taking on matters of aging with an audacity — and riveting style — their mothers might have envied.

Married or single, working or not, and most often grandmothers, they are asserting their presence on Instagram, intent, in the process, on subverting shopworn notions of what "old" looks and feels like. They are, to hear some tell it, "100 percent slaying."

"These women are ambassadors of age," said Ari Seth Cohen, the creator of Advanced Style, a popular street style blog, two books and a film documenting, in his words, the "fashion and wisdom of the senior set." His subjects, he noted, are simultaneously reflecting and contributing to a gradual shift in the common perception of aging.

"The idea of what these older women look like has changed," Mr. Cohen said. "If they were stylish in their youth, they will still be stylish now. They continue to be who they were."

That observation is echoed in the Elastic Generation, a 2018 J. Walter Thomson survey of 55- to 72-year-old women in England. "Our collective understanding of what later life looks like remains woefully outdated," Marie Stafford, the European director of the JWT Innovation Group, wrote in her introduction. "Age no longer dictates the way we live. Physical capacity, financial circumstances and mind-set arguably have far greater influence."

A woman in her 50s, then, "might be a grandmother or a new mother," the study goes on to say. "She might be an entrepreneur, a wild motorcyclist or a multi-marathon runner. Her lifestyle is not governed by her age but by her values and the things she cares about." Some of these women and their counterparts abroad are still subscribing to the counterculture values and maverick stance they adopted in the 1960s and '70s.

"We are not going to be little old ladies sitting in a nursing home with blue-rinsed hair," said Jenny Kee, @Jennykeeoz, a 71-year-old Australian artist and knitwear designer. "Or if we are going to be in a nursing home, we'll be there with our marijuana, our health foods and our great sense of style."

Ms. Slater echoed that sentiment. "When I was young, we were burning our bras and promoting free love," she said. "We were getting high. Why would accept the aging image of our mothers?"

In their wardrobes, unfettered self-expression is the rule. Dorrie Jacobson, an 83-year-old former Playboy bunny, piqued interest last year when she began modeling lacy black lingerie on her Senior Style Bible Instagram account. In an interview, as on her feed, she urges followers to ditch cobwebby notions of how a woman her age should dress. "Wear what you like," she said. "Age-appropriate has nothing to do with it."

That brand of feistiness likely owes a debt to a few playfully cantankerous online role models, women who call themselves "Insta-grans," who have made brazenness a virtue. Making waves, and a little cash on the side, are pop sensations like Baddie Winkle (89-year-old Helen Ruth Elam Van Winkle), whose posts are conceived to flip convention on its head.

Snapped in shrilly colorful knits, skimpy swimwear and, in one instance, a pink message T-shirt that reads, "Be a slut, do whatever you want," Ms. Van Winkle has transcended cult status. She has millions of followers and is paid to tout brands like Got2B hair products and Smirnoff on her account, and has made personal appearances at Sephora.

There is 69-year-old Lili Hayes, whose posts tend to send up stereotyped images of Jewish mom-ness. Ms. Hayes, who, as her online bio makes clear, is always a little ticked off, underscores her peevishness with a street-wear-inflected style. Her fashion signature: an ever-expanding collection of Supreme caps.

Chalk up their influence to a palpable shift in the wind. Their advent coincides with the stepped-up visibility, and clout, of political outliers like Ruth Bader Ginsburg, whose weathered features loom large these days on theater screens, to say nothing of a voluble coterie of older women in Congress.

Entertainment legends like Cher, the redoubtably glamorous grandma in "Mamma Mia! Here We Go Again," which arrives in theaters next month, do their utmost as well to spruce up the image of aging.

In an apparently more hospitable climate, designers and advertisers have begun to acknowledge a more mature market, pushing a concept of inclusion to extend not just to race and ethnicity but also to age. Maye Musk, 70, models for Concept Korea and is featured in Harper's Bazaar; Yasmin Le Bon, in her 50s, strikes poses for Armani; and at 65, Isabella Rossellini has returned as a face of Lancôme, the beauty brand that dropped her 20 years earlier.

Even so, those campaigns can carry a whiff of tokenism. According to the Elastic Generation study, women over 50 are still greatly underrepresented in proportion to their spending power.

Also overlooked is their social media savvy. Eschewing stereotypes, 73 percent of participants "hate the way their generation is patronized when it comes to technology," the report says. Six out of 10 say they find tech "fascinating," according to the report, and many of those may actually be more competent using tech than their younger counterparts.

What's more, they have a demonstrable earning capacity, many working well into their 60s and 70s, others reinventing themselves to embrace new forms of entrepreneurship.

Ms. Slater, for one, was quick to monetize her account. The Spanish retailer Mango hired her for a 2017 campaign, "A Story of Uniqueness." She recently appeared in a commercial for CVS Pharmacy, a company she admires for its use of unretouched models of varying ages. She is featured in a music video with Charlotte Gainsbourg and has been approached by several literary agents to turn her posts into a book, she said.

On her Instagram account, Ms. Kee has joined forces with Romance Was Born, a label led by a team of designers in their early 30s. "I am their guru and mentor," she said. Together they will present a collection during the couture shows in Paris in July.

And on her account, Silver Is the New Blonde, Jan Correll, 60, a consultant in technology sales, has attracted an assortment of labels, including J. Jill and Selma Intimates, a lingerie line. "Marketers know that women my age have the money to spend," she said.

While they court and may relish a surge in attention, some prominent influencers balk at being profiled. "It's colonizing to be put out there exclusively with women your age," Ms. Slater said. "Every woman should be able to open a magazine and see herself there as part of a mix."

Sarah-Jane Adams, 63, who turned to Instagram to show off the jewelry she sells, makes no references in her posts to her gray hair. "I don't feel as if I'm trying to play the old card," she said. She would rather be judged on the particulars.

"I was a punk," she said, "and before that I was a hippie. Now I've merged the two cultures. I'm part of the Germaine Greer generation. But in the world of social media, I'm simply lumped with all the over-60s."

Privacy is a concern as well. "Men reach out all the time," said Ms. Correll, who has been married for 43 years and is a grandmother of four. "Sometimes it scares me. I'm constantly deleting their posts."

Still, the outcome is more often positive. Posting on Instagram reinforces a sense of solidarity that may have been missing elsewhere in their lives. As Mr. Cohen of Advanced Style noted: "Some of these women don't live in big cities. For them, Instagram can lead to long-distance friendships, real-life encounters, dinner parties and other events that combat isolation and foster a sense of community."

That online community encompasses a surprisingly youthful contingent. On Instagram, many of Ms. Slater's followers range in age from 25 to 35. "Young people don't seem to have the same bias that older people do," she said. "They don't like categories — they deconstruct all these historical groupings like gender. That's why some of them identify with my posts. The people who support me, follow me, hire me — they're all young."

Ms. Kee ascribes the enthusiasm of girls in their teens and women in their early 20s to a wish-I'd-been-there mentality. Among her special champions, she said, is her 13-year-old granddaughter, an ardent fan of '60s rock, especially the Beatles. "We lived in extraordinary times," Ms. Kee said of the period when she came of age.

"These girls know that, they know what we lived through. They envy us."