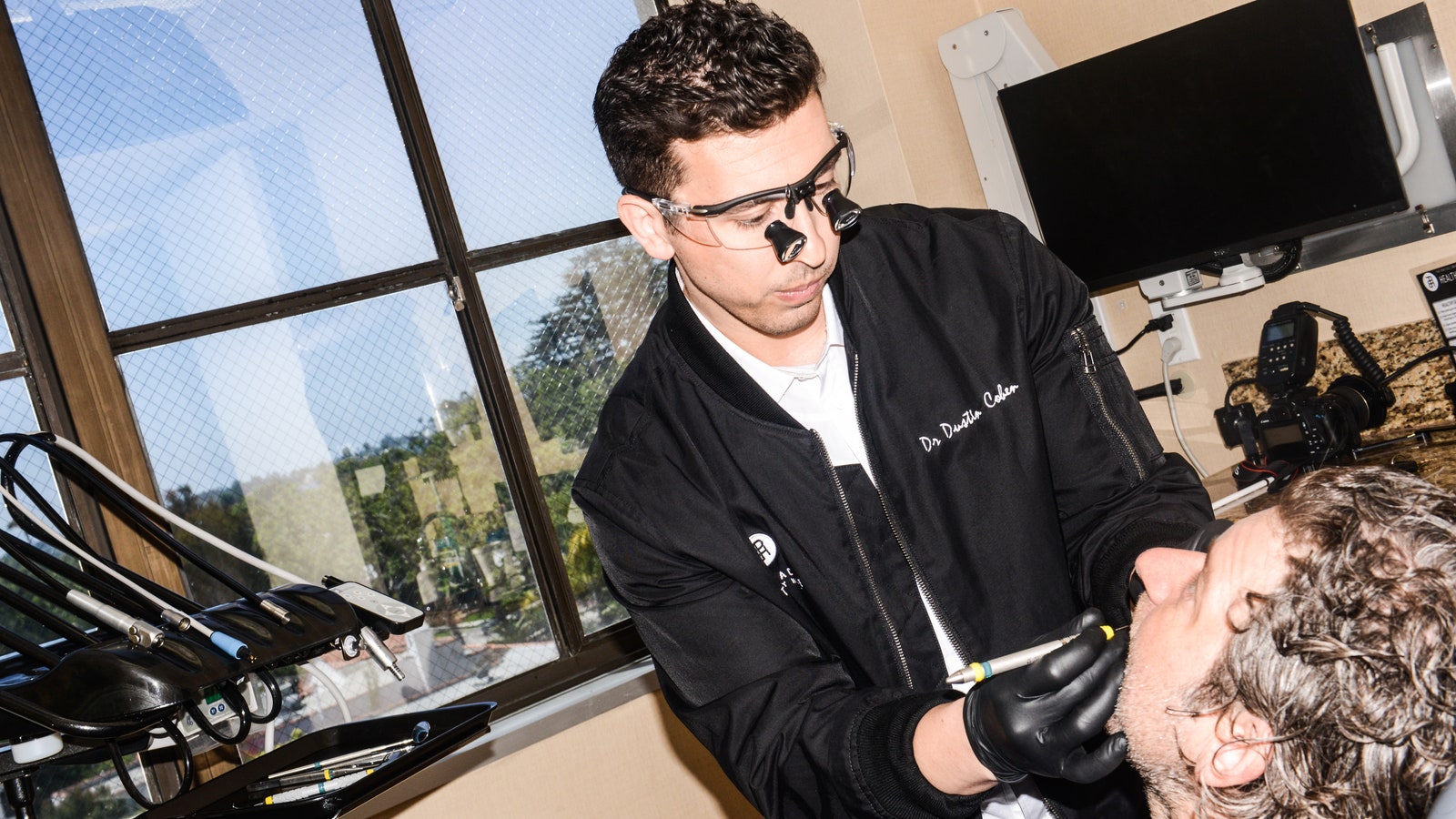 Dr. Dustin Cohen has a sneaker collection, and a lab coat that's more of a bomber jacket. He's also got a thriving Beverly Hills dental practice, where he turns regular old teeth into custom works of art. Because these days, there's no bigger flex than a big, beautiful smile.

When I moved back to LA after ten years living in Chicago and New York, the thing that gave me away as a recent transplant was my teeth. They were cheese-pizza white, used-Styrofoam-coffee-cup white: what a busy New Yorker would call basically white, and an Angeleno would call garbage. I never had a dentist in New York; in L.A., I quickly acquired one across the street from Soho House (in a building that, I soon learned, aptly has dozens of dentists). Within a year, I was sitting for a professional whitening, each tooth flambéed all for about $600. It was, I told myself, an investment. The procedure cost a lot less than a designer bag or an iPhone X or any number of things a millennial my age will buy to signal success—and it had the distinct advantage of being attached to my face twenty-four hours a day. But I'd never cared about white teeth before. Why did I care now?

In part, I was doing my patriotic duty: Americans spend $1 billion each year on whitening products and procedures, and billions more on cosmetic dentistry. The whole industry is now worth an estimated $110 billion dollars. Mary Otto's 2017 book Teeth makes a case for the American mouth as "a grim economic indicator," an index of relative privilege. Tens of millions of Americans live in areas with dentist shortages. Just over a third of adults visited a dentist in 2012. At the end of 2014, fewer than 2/3 of Americans had any dental coverage. (I'm one of them.) Medicare does not include dental, and Medicaid treats it as optional. Of course, cosmetic procedures are not eligible.

And at the same time, "a certain kind of smile is expected of people who are rising," Otto writes. Look at today's anthems to achievement for proof. There's Cardi B on "Bodak Yellow" with "got a bag and fixed my teeth / Hope you hos know it ain't cheap." On "Brown Paper Bag," Offset boasts he sent "30,000 to the dentist." And Rihanna, on "Lemon," riffs "this beat tastes like lunch / but it's runnin' from veneers and it's runnin' from the fronts"—perhaps the first time veneers appeared in a #1 hit song. A few years ago, teeth trends were all grills and gold; today the perfect smile is paramount. As mega-mansions, private yachts, and extravagant wellness diets increasingly feel like prerequisites of the super-rich. What they spend every waking minute with are nice teeth. As it goes with such spoils, teeth have gone bespoke, and an entire industry has popped up to provide them. Los Angeles, the world capital of fame—and, by extension, smiles—is where you get them.

To take a closer look at high-end American mouths, I came to see Dr. Dustin Cohen, D.M.D., on his lunch break on a recent weekday afternoon. The door of his Beverly Hills office reads "The Practice"—as if there were no other, in a building full of them—with the neat descriptor, "Boutique Dental." Inside, past a lifestyle blogger's coffee table book (100 Sassy Tips), I met Cohen. He was dressed in Louis Vuitton sneakers, an Alexander McQueen button-down, and a customized bomber jacket with the logo for The Practice. (The Practice has a logo: a tangle of the letters T, P, B, and H.) Other than that, with his neat haircut and eager, toothy grin, he looked like my first cousin's husband.

On its website, The Practice—which Cohen operates with his wife, Stacey C. Cohen, as well as another dentist—advertises its "bespoke" experience. ("Bespoke is a term traditionally used to describe the custom tailoring of high-end clothing," the website explains.) There are promises of concierge service, a porcelain studio helmed by a master ceramicist, holistic dentistry, gluten-free treatments—vocabulary you'd expect while perusing a concept store, not strapped down for a teeth cleaning. In person, The Practice looks much like a normal dentist's office; it's the mouths the Cohens service and renovate, and the additions they make, that are notable. In the past, Cohen has designed grills exclusively with designer Dolly Cohen; fitted the tattoo artist Dr. Woo with a custom-tattooed veneer; and for Ninja of Die Antwoord, crafted veneers that look like fangs.

"It's the most functional art piece, style piece that you're gonna use every day every second," Cohen explained of teeth. "A guy just said it to me this morning, 'You're a designer. You're more of a designer than you are a dentist.'"

He counts fellow hypebeasts as patients: Woo, skateboarder Chad Muska, and Josh Peskowitz of the L.A. men's store Magasin. As far as his own style, Cohen admitted he was more dressed up than usual for our meeting. He usually wears Nikes or Yeezys to the office—he owns about 100 pairs of sneakers—and his custom black lab coat. He has a handful of tattoos, including ones of a pair of Air Jordans and of the Beverly Hills sign, to commemorate his lifelong dream of working there. For a dentist, he said, "this is the mecca."

"Our patients are billionaires," Cohen said. "Lots of billionaires. Studio executives. Celebrities. That kind of thing." Famous patients like Sylvester Stallone populate his practice's Instagram account, which advertises "#Luxury Dental for Those #IntheKnow." Porcelain veneers—shells of porcelain or composite resin fitted over one's teeth that last a few decades—can cost about $3,000 a tooth, and an implant can run up to $6,000. There are many, many people in LA willing the pay the price. Cohen estimated about half the practice's work is cosmetic. They do not take insurance.

"Could you get into the six figures? Sure," Cohen said. "It's generally not quite that outrageous but it's generally in the $30,000-$80,000 range." I privately noted that a set of veneers could cost me a year's salary.

A patient earlier that day had balked at the price: "That's more than the art hanging in my house that I bought when I felt like I made it!" he told Cohen, as relayed to me. Cohen replied: "Do you use that piece of art every second of your life? You do your teeth."

Cohen elaborated to me, "There is no article of clothing, there is no piece of jewelry, fashion accessory, no art on the wall that you're going to get as much value out of as your smile," later adding, "It's the brightest thing on your face."

Los Angeles attracts dreamers. They're usually aspiring actors—but very occasionally, they're also dentists. Cohen grew up in Florida—"Lots of bright, shiny teeth. Less clothing."—but always knew he wanted to be a dentist in Los Angeles. He came along at precisely the right time: at 36 years old, he has essentially grown up alongside the cosmetic dentistry industry. Research by dentists John R. Calamia and Richard J. Simonsen in 1982 found that it was possible to improve teeth by etching porcelain for veneers. The idea, full of cosmetic potential, arrived just in time for the 1980s. It was Pandora's Box, if Pandora's Box was full of scary-perfect teeth.

"At the time, my ideas were connected to the saving of tooth structure with these advances, not as much to the 'cosmetic' benefits," Simonsen wrote in a 2007 article. "Perhaps this conservative, minimally invasive philosophy that I have is responsible for the visceral repulsion I feel from some of the enhancement cases (I would not call them treatment, as this suggests a health benefit) I see published in the tabloid press." As he reiterates throughout: "Where is the professional and public outrage at the troubling trends in the marketing and selling of 'cosmetic' dentistry that besiege our profession today?"

Ten years later, whatever outrage the actual inventor of veneers feels is completely absent on Instagram. Many dentists who specialize in cosmetic procedures show off their handiwork there. One can find Cardi B's dentist or the Kardashian family's dentist on the platform, with followers numbering in the tens if not hundreds of thousands.

"Billionaires aren't shopping on Yelp for their dentist," Cohen, who also offers management services for other dentists, noted. And when one considers that for some, teeth are just another lifestyle product, the social-media lure makes sense. (Dr. Woo told me he found Cohen "on the gram.") The social-media marketing explosion is paying off: according to a 2012 report, dentists now make more per hour than doctors.

But what are you really buying when you buy a new head of teeth? Cohen showed me before and after photos of anonymous clients. An older man's gummy mouth full of missing teeth morphed into carnivorous perfection; a younger woman's chipped front teeth materialized into a wall of white. In photo after photo, the less-than-perfect had been subtly smoothed over—and not even in a noticeably dramatic way. It was more like everything had been hit with a gloss—or, fittingly, with an Instagram filter.

"It's minimalist," Cohen had said earlier of his technique. "Although there's nothing minimal about the work that goes into it."

The smiling people in Cohen's photos in Cohen's photos looked richer. They look happier. I was not sure to what degree each one of these things influenced the other. What I was certain of was that I felt suddenly competitive with a bunch of faceless strangers. Teeth may have shed their primal importance to us, but on the modern hunt for clicks, followers, a platform, a brand, they essentially mean the same thing: hashtag goals.

I asked Cohen what else I should do to my recently whitened teeth. He emphasized that he would not personally suggest anything—unless, of course, a client was asking. I was asking. He told me to smile big.

"Probably about a $30,000 job right there," he estimated—not for gold teeth or fanged teeth or hypebeast teeth, but for ten veneers. He gave me a rundown of what he could do: my smile would reach back to the molars, a "current design" of pink-white-pink, my back teeth appearing "like music in a movie where it fills in, and it makes it feel like something special." And then the front teeth, of course—those would get veneers, too. Everything would "harmonize," Cohen said. I imagined a new smile, so fresh, so layered, so sparkling it could have been a new Cardi B track. Would I be #blessed if my smile said I was? As I thought of the possibility, Cohen quickly noted of my thousands of dollars of hypothetical dental work, "But I would never tell you that."