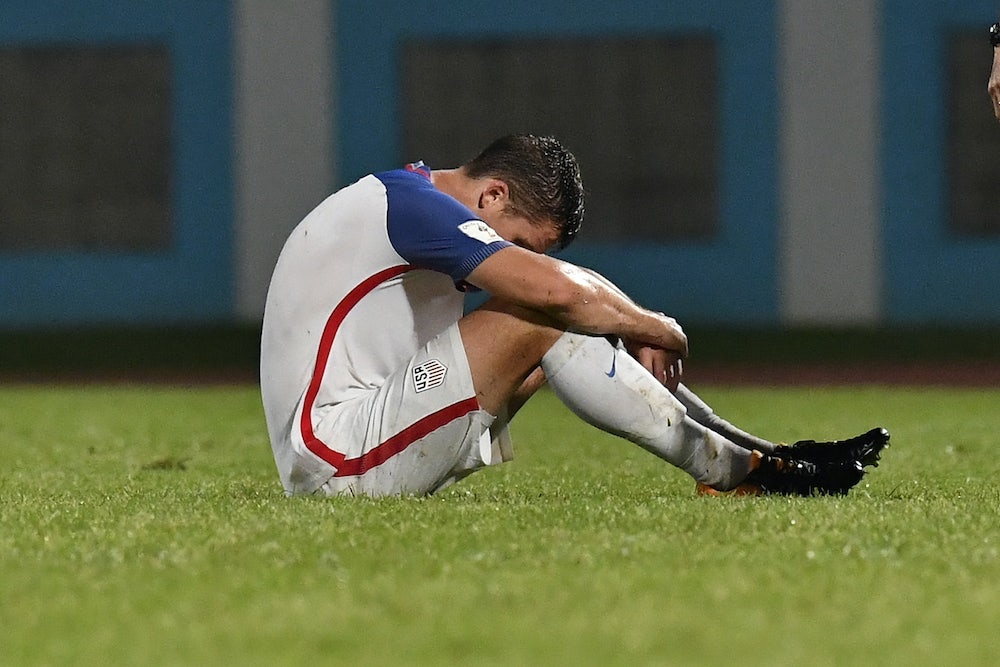 I spent the summer of 2010 in the sweltering Mississippi Delta, swatting mosquitoes the size of quarters and, regrettably, not watching the U.S. men's national team play in the World Cup. During the previous few World Cups, I'd snuck into bars underage, woken up before sunrise, and hidden livestreams behind barely professional-looking spreadsheets all so that I could watch Americans play soccer against the world's best.

But I was teaching that summer in Mississippi and couldn't leave my classroom. So I didn't see Clint Dempsey's long range shot slip hilariously through the fingers of England goalkeeper Robert Green. I missed the come-from-behind draw, which should have been a win, against Slovenia. Even worse, news of Landon Donovan's last-second goal against Algeria—the greatest ever in U.S. men's soccer history—reached me, lamely, via text message.

In those years, the men's team played a scrappy, optimistic style of soccer. The U.S. didn't have world-class talent, but they could defend in blocks and break out on quick and occasionally ruthless counterattacks. Soccer writer Matt Doyle has dubbed this style as "try hard, run fast," and, on the team's best days, they performed at a level that exceeded the sum of their parts.

Over the past few years, however, that identity has been missing from American soccer, and it's why the team won't be playing in Russia later this month after failing to qualify for the 2018 World Cup last fall. The team's absence from the tournament, the first since 1986, is terrible for the players and for the growth of the sport in the U.S. But as a viewer and a fan, I'm not all sad about it. In fact, I'm relieved.

Seven years ago, it was impossible to imagine that the United States would not be playing in the 2018 World Cup. These were the early, heady days of the Jürgen Klinsmann era of the U.S. men's soccer. Klinsmann, a legendary German player and former coach of its national team, had an elite international pedigree and the sun-soaked charisma of his adopted California home. He promised to raise the team from soccer's middle rungs into the global elite.

"We're working on a different style of play," he said in an address at U.S. Soccer's annual meeting in 2012. "A system, a style, that hopefully entertains you and hopefully shows the best teams in the world that we're able to play this game with them and not only to react to them. So this is our goal in the long run."

It was an indictment of the traditional American style—"try hard, run fast"—and one that was welcomed at the time. Though counterattacking soccer had gotten American teams into the knockout rounds of the World Cup and into the final of the 2009 Confederations Cup, there remained a wide gulf in quality between the U.S. and the top clubs in Europe and South America. Klinsmann contended that American soccer needed a revolution to close the gap, and many fans believed he was the man to lead it.

There were some bright spots early on. The U.S. won on Mexican soil for the first time ever, and defeated Italy and the Netherlands in friendly matches. In 2013, a resurgent Landon Donovan led the U.S. team to the 2013 Gold Cup title. More importantly, Klinsmann challenged American players to leave their "comfort zones." He wanted his team to adopt the ruthlessly competitive mindset that had guided his own professional career—to be aggressive on the pitch and constantly strive to play for the biggest clubs in the biggest leagues in Europe.

But over Klinsmann's five and a half years leading the team, the problems that had plagued him during his previous coaching stints surfaced with the U.S. team. Players complained that Klinsmann's tactical instructions would often amount to vague aphorisms like, "Go express yourself." In training, Klinsmann overemphasized fitness and trotted out new systems of play without adequate practice. This lack of tactical clarity bred tension and distrust in the locker room.

During the 2014 World Cup, a tournament that Klinsmann hails as one of the great successes of his tenure, the underlying statistics suggest that the team underperformed: Over four games, it possessed the ball for less time than any other U.S. World Cup team in modern history and was outshot 94 to 44. In the team's 2-1 loss against Belgium in the knockout round, it took a superhuman performance from Tim Howard, recording a World Cup-record 16 saves, to keep the game close.

I cringed my way through the 2014 tournament. There were moments of ecstasy, like John Brooks's fantastic game-winning header (and even better goal celebration) against Ghana, but there were more moments of frustration as I watched a team without an identity grope for one. The players worked hard—central midfielder Michael Bradley ran himself into the ground—but without a clear system of play, the team's effort was ineffective. They were trying hard and running fast, but it wasn't in service of any coherent strategy.

The problems continued over Klinsmann's next two years in charge of the team. There was the disastrous fourth-place finish in the 2015 Gold Cup and subsequent failure to qualify for the 2017 Confederations Cup. The team was no longer fun to watch; I can't imagine it was a fun team to play for, either. The final game of Klinsmann's tenure was a brutal 4-0 drubbing in Costa Rica. If the U.S. team used to exceed the sum of its parts, by 2016 they were the opposite. Though Klinsmann had been hired to instill a new attacking identity in the team, he had only managed to break the team's existing one.

The team briefly rebounded under new head coach Bruce Arena—who had coached the 2002 and 2006 World Cup squads—but the margin for error was small. In the final and decisive World Cup qualifier last year, against the Caribbean island nation of Trinidad, the team played without energy or ideas, leaving viewers to shout forlornly at their screens and wonder where the players' famous grit had gone. In the dying minutes of that game, the U.S. down 2-1, there was no last-gasp goal to save the day. The team hadn't earned that kind of luck.

Back in 2010, when I was in rural Mississippi, the final U.S. game of the World Cup landed on the weekend. I didn't have to work, so I went to a local bar to watch with a cluster of other American fans. There's a photo from that afternoon that I dug up recently. I'm standing with a bunch of people whose names I can't remember; I don't think I even knew them at the time. But our arms are wrapped around each other as we watch the final minutes of extra time, filled with hope that, although the U.S. was down a goal to Ghana, Donovan could conjure one more moment of magic like he had against Algeria.

The U.S. lost that day, but that game, that bar, and that photo epitomize what I used to love most about American soccer. There's a beautiful irrationality to the whole enterprise. We knew that we weren't going to win the World Cup, but the sliver of hope that we might get to watch one more game was enough to unite a group of strangers in a strange place.

I can't feel anything close to that level of emotion with the current team. The U.S. has been too underwhelming and inconsistent for too long to trust them with anything close to hope. Watching them in the World Cup likely would have produced only more panic, not joy.

So I'm looking forward to being a neutral soccer fan this summer, appreciating the beauty of the game without the agony of investment. Rather than having to watch the U.S. stumble through the group stage, I'll be able to watch the likes of Egypt's Mohamed Salah and Argentina's Lionel Messi with uncomplicated glee. Sure, I'm bummed that a player as exciting as 19-year-old American star Christian Pulisic won't get the chance to raise his profile at a World Cup. But until the U.S. can regain the soccer identity that it lost—or, better yet, carve out a more progressive one—I'm happy that I don't have to watch them try to figure it in Russia.

After the tournament, U.S. Soccer will hire a new coach. Hopefully, the federation's freshly elected president, Carlos Cordeiro, will find someone who can turn the team into a legitimate World Cup contender rather than an overachieving underdog. That will require, among other things, producing more young players like Pulisic. If that happens, I very much look forward to sneaking out of my office in 2022 to watch the national team play, swilling beers and locking arms with strangers. We probably won't win it all, but at least we'll believe again that we might.