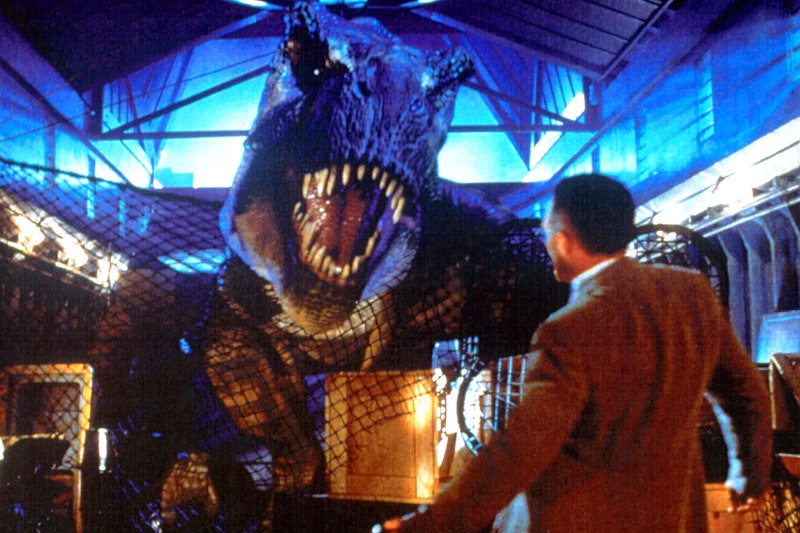 Every Jurassic Park sequel must begin by answering the same question: Why the hell would anyone go back to Jurassic Park? I love dinosaurs and zoos, so you'd think I'd be the ideal audience for a dinosaur zoo—but as soon as I heard some dude got eaten off a toilet by a Tyrannosaurus Rex, I would cancel that vacation.

And still, we have four Jurassic Park sequels and counting. No matter how badly things go, greedy corporations seeking billions of dollars just can't resist taking another crack at launching a Jurassic Park (or, for that matter, a Jurassic Park movie). And now that we're getting our first Jurassic World sequel—25 years after the original Jurassic Park first arrived—it's an ideal time to go back and look at the sequels that got us here in the first place.

The most interesting thing about The Lost World: Jurassic Park is that Steven Spielberg chose to direct it—the only non-Indiana Jones sequel in his entire career. And the The Lost World, which hit theaters in 1997, came at a particularly interesting time in Spielberg's career. He had followed up the smash success of Jurassic Park, which was then the highest-grossing movie in history, with the black-and-white, Best Picture-winning Holocaust drama Schindler's List. Spielberg has always been comfortable juggling his blockbusters with his prestige dramas—he did early in his career with Indiana Jones and the Temple of Doom and The Color Purple, and did it again recently with The Post and Ready Player One—but it's striking that he followed up The Lost World with Amistad, a historical drama about a slave ship, and the World War II epic Saving Private Ryan.

So what was this big dumb dinosaur sequel doing right in the middle of the most acclaimed stretch of Spielberg's career? He himself has since acknowledged that making The Lost World was essentially an act of hubris to see if he could pull off another "slam dunk"—but the sequel does make a few intriguing pivots from the original Jurassic Park. Original stars Sam Neill and Laura Dern are nowhere to be found. Instead, The Lost World elevates fan favorite supporting character Ian Malcolm (Jeff Goldblum) into the lead role, with early cameos from John Hammond (Richard Attenborough) and his grandkids providing the rest of the connective tissue.

Why does Ian Malcolm decide to go back to an island full of deadly dinosaurs? The Lost World comes up with a shrug of an answer: A previously unmentioned paleontologist girlfriend named Sarah (Julianne Moore), who took off without telling Malcolm. He decides Sarah needs to be rescued from, uh, doing her job, and the rest of The Lost World is spent proving him right.

As much as I love Jeff Goldblum, the sardonic, mumbly Ian Malcolm works better as a dash of flavor than the main course—so it's no surprise that The Lost World basically becomes an ensemble piece once he reaches the dinosaur-infested island. In general, The Lost World's cast is probably more stacked than you remember. In addition to Goldblum and Moore, you get Vince Vaughn as a sly opportunist, Pete Postlethwaite as a big-game hunter obsessed with bagging a T-Rex, and Peter Stormare as a dead-eyed psycho who gets devoured by a flock of compsognathus. Malcolm's preteen daughter Kelly (Vanessa Lee Chester) sneaks along too, because apparently it's impossible to make a Jurassic Park movie without at least one precocious kid in it.

And then there are the dinosaurs; some returning from Jurassic Park, and some brand-new, and all of which are several degrees more vicious than anything in the original. The Lost World opens with a scene in which a rich little girl wanders away from a beachside picnic and gets attacked by a dozen hungry compsognathus. It's a scene Spielberg reportedly cut from the original Jurassic Park because he found it too graphic. Its placement feels like a statement of purpose, because The Lost World is a much darker movie than its predecessor—and often literally, since most of the movie takes place at night and in the rain.

The Lost World packs in two legitimately great action sequences. There's a scene when a T-Rex leaves a truck dangling over the edge of a cliff—which forces Sarah to lie still on a rapidly cracking windshield—and a funny, nasty little bit where the velociraptors stalk armed men through a field of tall grass, dragging them one by one to their horrifying deaths. The culling process continues until Ian, Sarah, and Kelly make it to the safety of a chopper and head back to the United States.

The end? Nope! There's a whole pointless third act. If The Lost World had ended when it should have, Jurassic Park III would probably have been all about InGen, the company behind Jurassic Park, as they attempted to establish a Jurassic Park in San Diego, which would bring these havoc-wreaking dinosaurs to the United States for the first time. Instead, Spielberg decided to cram the entire San Diego subplot into the last 30 minutes of The Lost World. A T-Rex gets loose almost instantly and stomps around downtown, crushing cars and devouring people, until Ian and Sarah manage to lure it into the cargo hold of a ship again.

Damn. Certainly sounds like the kind of calamity that would ensure no one would even attempt to make contact with genetically-engineered dinosaurs again! I guess that's why Jurassic Park III literally requires its protagonist to be clubbed in the head and dragged, limp and unwilling, onto the beach of Isla Sorna to square off against the dinosaurs one more time.

I'll say this for Joe Johnston's Jurassic Park III: It comes in at a tight 92 minutes! It also has this acid-trip of a dream sequence:

And... that's pretty much it. Jurassic Park III aims to replicate past glories by swapping out Ian Malcolm and bringing back Jurassic Park protagonists Dr. Alan Grant (Sam Neill) and Ellie Sattler (Laura Dern). This time, Grant gets tricked by an obnoxious estranged couple (William H. Macy and Téa Leoni), who drag him down to the dinosaur-infested island to help find their missing son Eric. He's like 12 years old and he's been missing for eight weeks, so he should definitely be a skeleton in a pile of Tyrannosaurus poop by now—but eventually, Grant finds him. The kid brags about surviving on his own for eight weeks with the help of a few tools and resources—including, most notably, a large jar of T-Rex urine. When Grant asks where he got it, the kid winces and mutters, "You don't wanna know." Hey kid: I definitely want to know! Did he sneak under a peeing T-Rex, hold up a jar, and hope for the best? Did he just find a big yellow puddle and scoop it out with a ladle? I hate this movie, but I'm still gonna buy the DVD to make sure they don't cover this in a deleted scene.

Dino-related hijinks follow, with some bullshit about pteranodons swooping down and grabbing people and a pack of velociraptors hunting some stolen eggs. The estranged couple gets un-estranged after they reunite with their kid. In a remarkable deus ex Ellie, Laura Dern saves the day from thousands of miles away by figuring out what's happened and calling the U.S. government to save everybody. And Jurassic Park III ends with Dr. Grant noting that the pteranodons are following them away from the island in search of new nesting grounds.

While I am no fan of Jurassic World, I'll give the movie credit for abandoning that dumb Jurassic Park III cliffhanger for the dead-end it clearly is. Instead, Jurassic World begins with... another Jurassic Park, which promptly goes to hell. And now, in the sequel, the abandoned park about to buried by lava. Seems like a great time to let all those escaped man-eating dinosaurs die! So of course they're already making a Jurassic World 3.