Imagine a society without fathers; without marriage (or divorce); one in which nuclear families don't exist. Grandmother sits at the head of the table; her sons and daughters live with her, along with the children of those daughters, following the maternal bloodline. Men are little more than studs, sperm donors who inseminate women but have, more often than not, little involvement in their children's upbringing.

This progressive, feminist world - or anachronistic matriarchy, as skewed as any patriarchal society, depending on your viewpoint - exists in a lush valley in Yunnan, south-west China, in the far eastern foothills of the Himalayas. An ancient tribal community of Tibetan Buddhists called the Mosuo, they live in a surprisingly modern way: women are treated as equal, if not superior, to men; both have as many, or as few, sexual partners as they like, free from judgment; and extended families bring up the children and care for the elderly. But is it as utopian as it seems? And how much longer can it survive?

Choo Waihong set about finding out. A successful corporate lawyer from Singapore, she left her job in 2006 to travel. Having trained and worked in Canada, the US and London, she felt drawn to visit China, the country of her ancestors. After reading about the Mosuo, she decided to take a trip to their picturesque community - a series of villages dotted around a mountain and Lugu Lake - as many tourists do. But something beyond the views and clean air grabbed her.

"I grew up in a world where men are the bosses," she says. "My father and I fought a lot - he was the quintessential male in an extremely patriarchal Chinese community in Singapore. And I never really belonged at work; the rules were geared towards men, and intuitively understood by them, but not me. I've been a feminist all my life, and the Mosuo seemed to place the female at the centre of their society. It was inspiring." 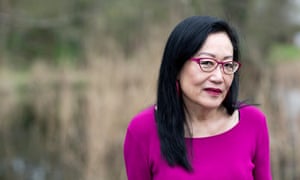 Choo Waihong ... 'The Mosuo seemed to place the female at the centre of their society. It was inspiring.' Photograph: Teri Pengilley for the Guardian

Warm, curious and quick-witted, Waihong made friends quickly. She discovered that Mosuo children "belong" only to their mothers - their biological fathers live in their own matriarchal family home. Young Mosuo are brought up by their mothers, grandmothers, aunts and uncles.

From the perspective of an outsider - particularly one from China, from where the majority of tourists come - the Mosuo are "condemned" as a society of single mothers, says Waihong. "Children are born out of wedlock, which in China is still unusual. But this isn't how the Mosuo see it - to them, marriage is an inconceivable concept, and a child is 'fatherless' simply because their society pays no heed to fatherhood. The nuclear family as we understand it exists, just in a different form."

It is common for Mosuo women not to know who the father of their children is, and there is no stigma attached to this

Men and women practise what is known as a "walking marriage" - an elegant term for what are essentially furtive, nocturnal hook-ups with lovers known as "axia". A man's hat hung on the door handle of a woman's quarters is a sign to other men not to enter. These range from one-night stands to regular encounters that deepen into exclusive, life-long partnerships - and may or may not end in pregnancy. But couples never live together, and no one says, "I do".

"For Mosuo women, an axia is often a pleasurable digression from the drudgery of everyday life, as well as a potential sperm donor," says Waihong.

Women own and inherit property, sow crops in this agrarian society, and run the households - cooking, cleaning and child-rearing. The men provide strength, ploughing, building, repairing homes, slaughtering animals and helping with big familial decisions, although the final say is always with Grandmother. Although men have no paternal responsibilities - it is common for women not to know who the father of their children is, and there is no stigma attached to this - they have considerable responsibility as uncles to their sisters' children. In fact, along with elderly maternal great-uncles, who are often the households' second-in-charge, younger uncles are the pivotal male influence on children.

"Mosuo men are feminists by any standards," says Waihong. "Boys think nothing of looking after their baby sisters, or taking their toddler brothers by the hand everywhere. I was once made to wait before talking business with an elderly Mosuo man until he had bathed his family's twin baby girls and changed their nappies."

A few months after her first trip, Waihong returned to Lugu Lake. A teenage girl, Ladzu, had offered to teach her the Mosuo language, which is passed down orally, and introduce her to her family. Her visits grew longer and more frequent. She became godmother to Ladzu and her brother, Nongbu. Ladzu's uncle, Zhaxi, a local character and successful entrepreneur, offered to build her a house. Thus she began to put down roots.

"I grew accustomed to shuttling between Singapore and Lugu Lake, navigating a hectic city life and a different rural rhythm in the mountains," she says. Her longer stays - she now lives with the Mosuo for a few months, three or four times a year - gave her the chance to discover more about this private, often misunderstood community.

In the absence of marriage as a goal, the only reason for men and women to have anything resembling a relationship is for love, or enjoyment of each other's company. If it runs its course, the usual reasons for staying together - for the children, societal or financial reasons - don't apply. As an unmarried woman in a community where marriage is non-existent, Waihong felt at home.

"All Mosuo women are, essentially, single," she says. "But I think I'm seen as an oddity because I'm not from here, and I live alone, rather than with a family. I get a lot of dinner invitations, and my friends are always egging me on to find a nice Mosuo lover." Has she? "That would be telling."

With life centred on the maternal family, motherhood is, unsurprisingly, revered. For a young Mosuo woman, it is life's goal. "I've had to advise many young women on ovulation, so keen are they to get pregnant," she says. "You are seen as complete once you become a mother." In this respect, Waihong, who doesn't have children, is regarded more keenly. "My sense is that I'm pitied," she says, "but people are too polite to tell me."

What happens if a woman doesn't want children? "That's simply not one of their choices. To even ask that question is to see the Mosuo through our eyes, our way of doing things. The question is not pertinent," she says.

And what if they can't have children, or produce only boys? "They will formally adopt a child, either from an unrelated Mosuo family or, more commonly, from one of their maternal cousins," she says. "A few generations ago, before China's one-child policy - which extends to two in rural areas - families were huge. There are a lot of cousins around."

To western eyes, this is the less progressive side of the Mosuo way of life. Is a society that, in many ways, emancipates women from marriage, and gives them sexual freedom, actually producing glorified 1950s housewives who have no choices other than motherhood? It's a frustration that Waihong feels with her goddaughter Ladzu, now 22. "She is a mother, and leads a very domestic life," says Waihong. "For a young Mosuo woman, that's not unusual. But I wish it were different. For me, it's a waste." 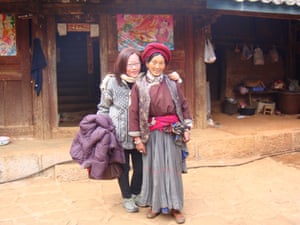 Choo Waihong with a Mosuo matriarch.

But things are changing. Since (mostly) Chinese tourists began arriving in the early 1990s, bringing paved roads, an airport and jobs for Mosuo people, their traditional way of life has started to feel outdated to its young inhabitants. Ladzu and her friends may still be living for motherhood, but she is part of a pioneering generation in transition: she is married, and to a Han Chinese man. She still lives at Lugu Lake, but in her own house, with her husband and son, who was born in February. She is not alone: although her grandmother's generation, in their 60s and 70s, still practise "walking marriage", as do many women in their 40s, about half of women in their 30s live with their "partners" - the fathers of their young children. A minority of men and women marry outside the community and move away.

"I know one Mosuo man who is living in [the nearest Chinese city of] Lijiang, married with two children," says Waihong. "Equally, I know a young Mosuo woman, working as a tour bus driver, who has a child on her own and lives in her mother's household."

Education often makes the difference: there is a junior high school at Lugu Lake, but the nearest senior school is 100km away, and few children attend. Even fewer head on to further education. "I know a handful of men and women who have become civil servants or college lecturers," says Waihong. "But most only have their junior school certificate."

In many ways, it doesn't matter to young Mosuo: tourism is providing careers - from waiter to guesthouse owner, tourist guide to taxi driver - until now, a foreign concept. This new rising class has money and the chance to meet people outside the Mosuo community; many families are renting out land for hotels to be built on. Subsistence farming is on the way out, slowly being replaced by the commercial farming of prized local crops. Where land is still farmed for the family, mostly in more rural parts, children head home to help with the harvest. "And they know there will always be food on the table for them, back home with Mum," says Waihong.

It is a society in transition, in a country that is changing fast. Feminist activism is on the rise in China, battling ongoing discrimination; China still describes unmarried women over 27 as "leftover". Can these naturally emancipated Mosuo women - and men - show Chinese society a different approach to family life? "Yes," says Waihong, "to wear their singlehood with pride."

Young Mosuo are carving out a different path from their parents, embracing "western" marriage and family life with gusto. Zhaxi, who built Waihong's house, says there will be no Mosuo culture left in 30 years. She is less sure. "I think their traditional family structure may come to be seen as halcyon, once they see what the alternative is," she says. "They were the original trendsetters, 2,000 years ago; they don't know how good they have it.