Nerf's Terrascout is many things. It's a remote-controlled tank. It's a camera on treads that live-streams its view back to its controller in real time. It's a fully automatic Nerf gun you can drive around the house, blasting your children, siblings, or spouse with a flurry of foam while giggling to yourself from behind a closed door.

Building this dart-throwing monster was a years-long process, riddled with designers and engineers troubleshooting and prototyping, painstakingly working through every quirk of its design. Everything is a decision, from the way it moves and shoots to the smallest details of its styling. And not least of all, how to fit the big ol' thing into its tiny little box. 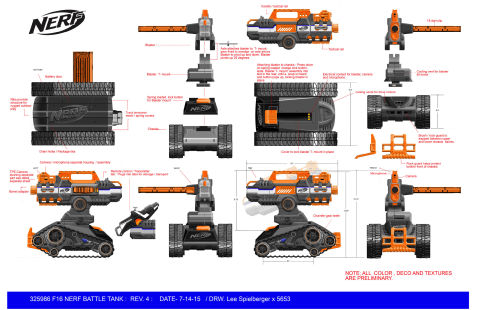 Making a Nerf toy is a particular kind of alchemy, a precise mixture of function and fun. But most people who've felt the joy of firing one have not gotten to see what leads up to the finished product: a years-long process involving fascinating prototypes that never see the light of day, from a cardboard cutout to a functional bot MacGyvered from spare parts to 3D-printed prototypes. I was lucky enough to visit Hasbro's office in Pawtucket, Rhode Island, and pick the brains of the folks who made it happen.

The Terrascout is one of Nerf's newest toys, released just last month, but its story goes back much further. "They've had an idea for some sort of remote control vehicle for years and years," Michael Ritchie, VP of Global Marketing and Strategy for Nerf, tells me. That long incubation time isn't altogether uncommon, according to Brian Jablonski, Nerf's Director of Product Design. "Sometimes we'll come up with a really cool idea, but then maybe for some reason the timing isn't quite right for it."

For years, that was the Terrascout's predicament. Nerf wanted to make a drone that rolls and also shoots, but the idea had no immediate path to existence.

It's a special kind of alchemy, a precise mixture of function and fun.

By 2014—years after the first drawings—things had changed. Nerf's dart-firing mechanisms had become smaller and more refined thanks to full-auto flywheel-based blasters like the RapidStrike CS-18. But more importantly, the age of the quadcopter had arrived. DJI was already on its second Phantom drone, and Parrot's Bebop was buzzing through the sky. We have yet to see Nerf quadcopters that launch a hail of darts from above, but the high-flying trend had effects on the ground as well. Specifically, there was a peak of interest in remote-control vehicles with streaming cameras, plus an all-important drop in the cost of robust battery technology.

The time was right. And so the proto-Terrascout came out of the drawer to start a two-year sprint into reality, the crucible where there real hard work gets done. 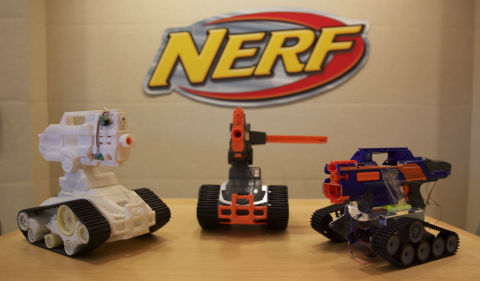