Before he began his lecture on Monday night, assistant history professor at New York University, George Solt, had a few disclaimers. "I don't know how to cook ramen," he warned his audience, "and I don't really know the best places to eat ramen."

Solt does, however, know all about the history of a dish that's evolved over the decades from a staple of the Japanese working class, to a mainstay of American college students and now, to one of New York's trendiest foods. Speaking at an event hosted by the Culinary Historians of New York, the author of The Untold History of Ramen began his discussion with a simple question: How did ramen become the national food of Japan?

Ramen isn't originally from Japan at all. It's from China, and how it made the jump is still up for debate.

Characterized by its use of kansui—the mixture of baking soda and water that gives ramen noodles their chewy texture and characteristic yellow color—and meat broth, ramen isn't originally from Japan at all. It's from China, and how it made the jump is still up for debate.

The origin stories place the birth of Japanese ramen anywhere between the 17th and 20th centuries. Early attempts to establish a history of ramen claim a scholar named Shu Shunsui brought the recipe with him when he escaped Manchu rule in China to serve as an advisor to feudal lord Tokugawa Mitsukuni. While the narrative reflects China's enormous cultural influence on Japan at the time, there's just one problem with it: No historical record of Shunsui actually cooking ramen for Mitsukuni exists.

A more plausible theory, Solt told his audience, dates Japanese ramen consumption to the founding of Rai-Rai Ken in Tokyo (not to be confused with the shop of the same name in New York's East Village) by a customs agent who'd worked in Yokohama's Chinatown. Opening its doors in 1910, the restaurant employed Chinese cooks and popularized what was then known as "shina soba": shina for China, soba for the noodle dish already well established in Japanese cuisine.

Here's where the history of ramen gets "touchy," to put it charitably. Shina soba caught on with blue-collar workers because it was cheap and filling—major bonuses for diners without much time or money. But shina soba wasn't just associated with cost-cutting; it was also linked to China, a country defeated and conquered by Japan just as the dish caught on. Take Nankin Senryo, the ramen shop founded in 1937, the same year as Japan's invasion of Nanjing. Its name translates literally to "flower," but it's also a homonym for "occupation." Laborers weren't the only ones who took a liking to shina soba. Politically radical students and soldiers did as well.

Selling ramen could and did land people in jail.

World War II all but destroyed ramen's first wave of popularity. Thanks to food shortages and famine, the government placed tight regulations on food supplies, and earning a profit via restaurants or pushcarts was strictly prohibited until 1949. Some wheat flour made it onto the black market, though, and many of the country's unemployed turned to hawking ramen. Which means, Solt points out, that selling future all-nighter fuel could and did land people in jail.

Speaking of dorm room food, when instant ramen was introduced in 1958, it wasn't considered budget grub at all. Through the early '70s, the product was aimed at middle-class women and children: supermarket food providing whole, nutritious meals to nuclear families, as opposed to the fare dished out in ramen shops to students and workers flocking to reindustrializing cities by the thousands. 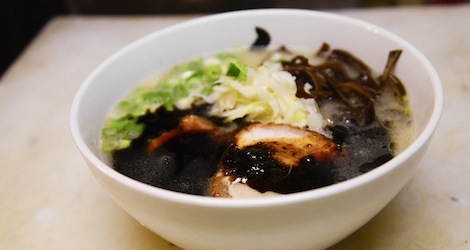 Ramen's association with the postwar economic boom led to what Solt calls the dish's "nationalization phase." Even as vendors gradually went out of business and the generalized Chinese shops that had introduced ramen gave way to newer, more upscale restaurants specializing in ramen alone, ramen became increasingly identified with Japanese culture. Viewed as an alternative to the European cuisine flooding into a nation newly flush with cash, ramen developed into a national dish. Thanks to its affiliation with urban workers, it also became the object of nostalgia for a time when Japan was still on the rise rather than settled into affluence.

Enter ramen tours, a phenomenon that began with the small city of Kitakata in 1982. And Yokohama's Ramen Museum, a multimillion-dollar effort now in its twentieth year. And even the Momofuku Ando Instant Ramen Museum, named after its creator—not to mention the partial namesake of the restaurant that helped launch ramen's stateside popularity.

An astonishing eighty percent of ramen shops in Japan are small businesses.

Solt wrapped his flyover history up by checking in on the state of ramen shops in today's Japan. They're not as ubiquitous as they once were, but they've outlasted the diners that were their main competition in the 1960s. Most admirably, they've managed to avoid the trend toward corporatization—an astonishing eighty percent of ramen shops in Japan are small businesses. That's partly due to a rich tradition of owners allowing employees to start their own restaurants, complete with recipes and business advice, after just a year or two in a "branch shop" system known as noren wake.

And despite his opening remarks, Solt did have a few comments on the New York ramen scene. Head to Menku Tei for a prime example of the Chinese spots that fueled workers for decades; meanwhile, Ippudo's a perfect illustration of ramen's transformation into a cultural icon of its country of origin. Ramen burgers, on the other hand, are "quite an American contribution" to the phenomenon, say Solt (though ramen-burger master Keizo Shimamoto tells us that a variant, made with chashu has emerged as a street food). 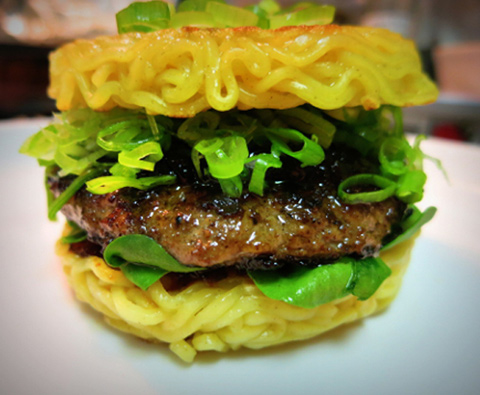