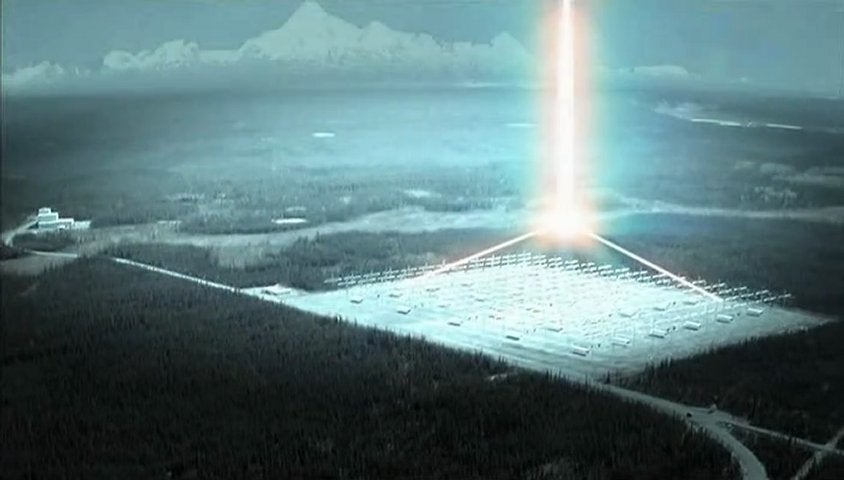 Can a facility that has inspired global conspiracy theories be designated a World Heritage Site? If so, that might be the only way to prevent the shutdown of the High Frequency Active Auroral Research Program (HAARP) in Alaska, which studies the ionosphere—or creates lethal hurricanes—depending on whom you talk to.

The HAARP installation, not unlike the Lawrence Livermore National Laboratory, is a peculiar hybrid of military and civilian science. It was conceived during the mid-1980s, but found itself without a clear mission by the time construction began in 1993 and the Cold War had ended. Jointly funded by the Air Force, Navy, DARPA and the University of Alaska, the $290 million facility's principal instrument is an array of 180 crossed dipoles that are spaced over an area of about 30 acres. Collectively, the array can transmit up to 3,600 kW of radiated power, which has made it possible for scientists to study the basic physics of how charged particles behave in the ionosphere, 55 to 370 miles above the Earth.

The official objectives of HAARP are to "identify, investigate, and, if feasible … serve to enhance future DOD Command, Control and Communications capabilities … Research areas that will be explored include generation of very low and extremely low frequency waves, generation of geomagnetic field-aligned irregularities, electron acceleration, and investigation of upper atmospheric processes." But, earlier this month, the military gave official notice to Congress that it intends to dismantle HAARP this summer. David Walker, deputy assistant secretary of the Air Force for science, technology and engineering, said this is "not an area that we have any need for in the future" and that research funds would be better spent elsewhere. "We're moving on to other ways of managing the ionosphere," Walker explained.

It's that sort of language that has inspired conspiracy theories since HAARP's inception. Just yesterday, a Serbian scientist blamed HAARP for recent flooding in the country: "It seems as if the sky opened, and sea of water fell from it. These were not rain droplets that you would typically expect to see. This was a designed weather pattern which I might add is not the first, nor will it be the last by HAARP." And, last week, a meteorologist was invited to give a talk at the Star Academy Charter School in Ohio. One of the students asked him "what kind of job will you get when HAARP is controlling the weather, and you're no longer needed?" The student had gotten the information from his science teacher.

A Long and Winding Tale

The shutdown of HAARP is rather anticlimactic, given its rather colorful history, which began with government research into ways to communicate with submarines that moved deep underwater to avoid Soviet detection. In the mid-1980s, physicist Dennis Papadopoulos, who was at the Naval Research Laboratory in Washington, DC, proposed that charged particles flowing through the ionosphere and could be used as antennas. Papadopoulos' timing was propitious, because the Pentagon had begun decommissioning over-the-horizon radar sites that had been designed to detect Soviet bombers attacking the United States—including one in Gakona, Alaska.

Enter Senator Ted Stevens (R-Alaska), who wielded considerable influence over the U.S. defense budget and was quite adept at funneling federal money into his state. HAARP offered Stevens an opportunity to continue funding a military facility in Alaska.

As the Cold War was winding down, Stevens offered one rationale after another to justify his latest star project. As Nature reported in 2008:

In a news conference in 1990, Stevens talked about bringing energy from the aurora borealis "down to Earth so it could be used" to solve the world's energy crises, earning him the mockery of physicists. Others such as Nick Begich, the son of another Alaskan lawmaker, began claiming that HAARP was really intended as a missile defense weapon…[a shield] transforming natural gas into microwaves, which would knock out incoming Soviet missiles. The idea, jokingly dubbed the "killer shield," was even reviewed by the JASON defense advisory group, but was dismissed as "nonsense."

When the Cold War did end, HAARP was a research facility in search of something to research. Opportunity came knocking in 2002, when DARPA recommended that HAARP should be used to study ways to counter the effects of an electromagnetic pulse that could be caused by a high-altitude nuclear explosion aimed at crippling low-Earth satellites.

And there were unique opportunities for scientific research, such as studying radiation from solar flares, the effects of ionospheric disturbances on GPS signals, and making observations of meteorites as they entered the Earth's upper atmosphere. One of HAARP's most famous projects was when researchers created a patch of "artificial ionosphere," which lit up the sky with the first human-made aurora that was visible to the human eye.

Over the years, HAARP has been a favorite target of conspiracy theorists, who claim that it is a secret weather-control weapon responsible for causing droughts, floods, hurricanes and even earthquakes. In 2010, the late Venezuelan leader Hugo Chavez accused the U.S. of using HAARP to induce a powerful earthquake off the shore of Haiti—a test that would ultimately target Iran. A Russian military journal warned that HAARP could trigger a cascade of electrons that would flip Earth's magnetic poles. "Simply speaking, the planet will 'capsize,'" it warned.

Why has HAARP been a magnet for conspiracy theories? Partly because of ominous-sounding language, such as its mission statement to "control ionospheric processes and phenomena." Also, the facility's science is not always easy to understand and its purpose has always been a bit murky. As an article in the Alaska Dispatch noted:

What makes HAARP susceptible to conspiracy criticism is simple. The facility doesn't open its doors in the same way as other federally-funded research facilities around the country, and it doesn't go to great efforts to explain the importance of its research to the public.

If you want to visit Oak Ridge National Laboratories (a Manhattan Project-era facility with exponentially greater funding but also a heavy focus on top-secret nuclear technology) you can show up to the visitor center for a public tour or schedule something more in-depth without much hassle. You can do the same at Los Alamos— another bastion of the Manhattan Project— in New Mexico. At both of those facilities, journalists can access unclassified research and talk directly to researchers and scientists.

None of that is possible at HAARP…

An ironic coda to HAARP's peculiar history is that the announcement to close it came almost exactly one year after the National Research Council of the National Academies published a favorable workshop study praising the "exciting" capabilities of the facility and the research that had been conducted there. The study also said that HAARP still offered opportunities for other branches of research, including "important advances in the scientific understanding of the physics of Earth's radiation belts."

Or, perhaps, that's what the government wants us to believe…